The beauty, the letterform, the commitment: Memories of Hermann Zapf 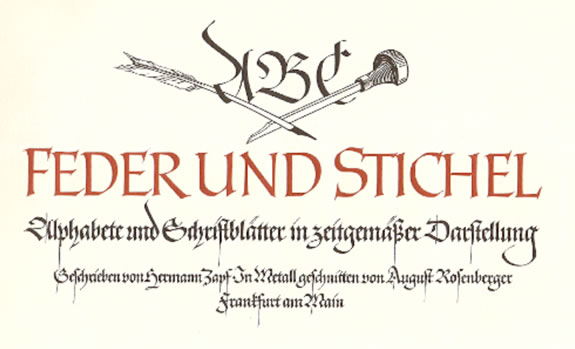 Earlier in my life, late 1970s, I’d reached to Hermann Zapf about a possible visit, with him and his wife, Gudrun Zapf von Hesse, in Darmstadt, Germany. I’d made the connection through the leadership of the Klingspor Museum, in Offenbach am Main, Dr. Hans Halbey, who was acting curator for the Klingspor type, book arts and design collections. I sent him my work, he critiqued it in his finely articulated micro-calligraphic notations and graciously met me in Darmstadt.

Kind, generous, and strictly defined in his notion of appropriately proportioned and detailed letters, he was a gentle counselor. I kept on that correspondent review, and meanwhile he continued to design fonts, books and broadsides, inscriptions and teaching as well as corporate engagements and alliances — like his work with Hallmark.

I organized a personal Alphabet Odyssey, in 1976 — a trip of a typophile’s dream: learning about and connecting with the best-of-the-best of fine printers, sign-makers and brush-workers, calligraphers, typographers, stone cutters, fiber artists, glass engravers, illuminators, book designers and fine printers, of the UK, France, Austria, Switzerland, Germany, Poland, Finland and the USSR [as it was known back then] as well as the calligraphic and hand-crafting type tribe of Estonia —
who officially suggested that they were not,
and still aren’t,
part of Russia.

I applied for and got a grant from the NEA for the immense sum of $500.00. That was a lot then — helped me a great deal in my visits with these type creatives.

Zapf was a perpetual inspiration. I searched out and found nearly all of his books. His early “Pen & Graver,” Feder und Stichel is a masterpiece of Zapf’s foundational calligraphy, engraved by his partner in the project, August Rosenberger. Completed three years [1950] before I was born.

We lament his passage, 6.4.2015 and send our condolences to his wife, Gudrun Zapf von Hesse.

YOU ARE WHERE YOU ARE

Contentment, placemaking and presence. Sometimes I study the context of people in their place. What is it for them? How are they doing? What are they being? That examination works in the context of brands, enterprise and leadership. What is the culture of a place, and how does it influence people? Is this place happy?…

The Context of Message, Framing of Context and Visualization I look for signs that aren’t signs — in a conventional sense — they tell another deeper story, but sigils that signal a message that stand for the nature of a place. Cairns, ovoo, iwakura no mononoke, menhir, dolmen. Traveling in the Himalaya, the trekker will…
We use cookies on our website to give you the best experience on our website. By clicking “Accept”, you consent to the use of ALL the cookies.
Do not sell my personal information.
Cookie SettingsAccept
Manage consent