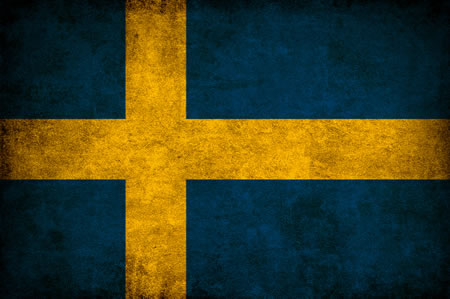 Number one in the world

It’s interesting to examine the idea of Sweden being exceptional. Having worked there, I can tell you that it’s truly unique. The people. The brands, the efforts of their enterprises and the quality of their humanity.

First off, I’d entreat the following: 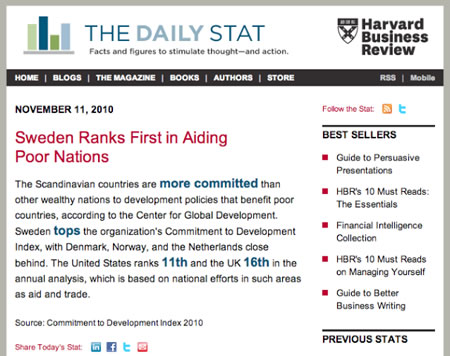 Where this information comes from is the overview of an international forum, the Commitment to Development Index, 2010. Explore that in detail, here — graphic posted below. 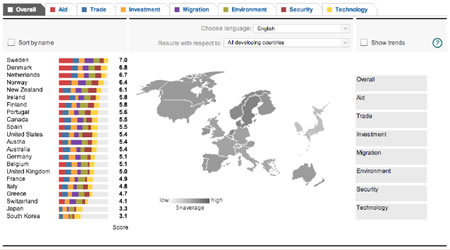 According to Patrick Gardner, CEO, Perfect Fools, “ABBA brought us disco and still spawn catchy show tunes at an alarming rate. IKEA, the friendly furniture giant, won its way into our homes by serving up bookshelves and beds with a side order of… meatballs?” 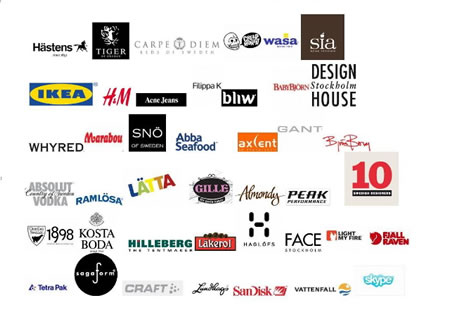 “With a mere 9 million inhabitants Sweden has enriched the world with a wildly disproportionate number of popular creations – a fact also true in our own sphere of digital advertising, where the work of native digital agencies and production companies like FarFar (“Grandpa”), North Kingdom, Acne, Perfect Fools and B-Reel has been well known for years. All this while less than .15% of the world’s population is actually Swedish. So what gives?”

It’s a question that’s worth asking. Working there, I found a different sensibility of both commitment and prosperity, as well as creativity. A willingness to listen, and to ask, and to embrace ideas that might be worthy of advancement and integration — still within the precepts of Swedish persona and strategy, as noted below. To the notion of Swedish Social Democracy, its historical legacy — national healthcare, lavish vacation offerings compounded with other social benefits built a sterling quality of living. If there was an emblem for Scandinavia, it would be Sweden. But it’s continuing to evolve, a Sweden 2.0, Gardner notes. 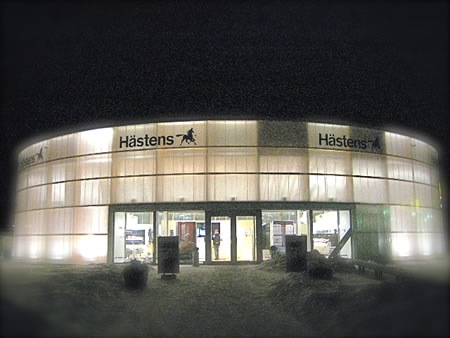 My experiences there exemplify some of the notations by Gardner, in his work there. Partnering with the brand group Hästens, I observed the singular character of his observations in working for Hästens in newly defining the positioning of their brand. But this range of thinking applies to others, as well, from Ikea to H&M, from Tetra Pak to Skype and Gant. What’s the take away?

Working with Jan Ryde, Chairman of Hästens, I can offer the following observations (encircling Gardner’s principles of Swedes).

What’s the Swedish brand, it might be about elevation, in some quarters, it might be about moving to another leveling of experience. And it might truly be about the aiming to the truth of Swedishness. Still, I learned a lot. And I’m ready to go back, to learn more. They are the ones to follow.

1. Listen carefully. Working with Swedish teams, you might be surprised by carefully they listen; there’s a willingness to explore and examine; it’s not about flat out acceptance. But all ears are on deck — what can be learned, and how might it be applied?

2. Be bold. The philosophy of work isn’t about moderate movement, it’s about embracing change and dramatic potential of transition. Look at Swedish brands, what’s been accomplished in terms of innovation, and you get the picture.

3. Modesty rules. The team is about linking and supporting — but it’s a team; and even the CEO is about supporting the accomplishments of the team, credit is there, but it’s bolstered by team presence. (Gardner defines this, in Swedish, as: Jante’s Law, or Jantelagen — it’s ugly to brag — “fult att skryta”.)

4. Teams are everything. Top down, horizontal outwards, the sense of hands-on action and commitment are real, activated and accomplishing things. While I was working with a team of maybe 15 people, even the CEO and CFO were in there, working out the details of supporting the strategic work that we were undertaking. Focus is attentive.

5. Push hard, push back. I was surprised by directness; Swedes speak their minds; if they don’t believe in something (like your work) they’ll tell you about it; it’s never that it’s not been considered, but more so about the nature of communications.

6. Savor life (and love your work). Working with Jan, while a man of inordinate commitment to the success of Hästens, there was still time for breaks with his family, time off to explore and engage.

7. Push for new. While Hästens might be a brand that is legacy based with a family tradition of decades of growth, leadership there is about constant evolution and innovation. Den Röda tråden, the red thread, is a snapping line, the idea that moves from the past to the present — it’s the soul of innovation, building on breaking and evolving the paradigm

8. Willingness to change. It’s something that every Swede embraces; if there’s a new idea in potentiality, then it’s worthy of examination, evolution, development, experiment and implementation.

9. Support brand culture. Brands have a nearly Asian character, people live inside their relationships to brand (along with their personal life), they embrace their sense of personality inside the quality of the work that they’re doing; it’s a level of commitment that boosts the spirit of the brand. And Sweden.

Seeing the recent pronouncements I had to offer some added expansions, from notes on Sweden’s giving propensity, working in Sweden, and importantly — Gardner’s new Digital Advertising book, some links to find our more here, and to buy the book.

Tim | NYC
–––
BRANDS THAT ARE BEAUTIFUL

Harvard Business Review's observations: cool. I found it interesting that the Harvard Business Review would be identifying the tattoo as a point of relevance to analyzing trend. But of course, it -- the trend content -- really comes from a hiring agency. Personally, I find (to the notion of the Human Brand) that the idea…

Harry Potter 7 (Warner Brothers) Round glasses, hipness and the legacy of a design theory from the Middle Ages. Image from New York Carver Today's the day that the ending begins for Harry Potter. And if you're one that's studied this phenomenon from the beginning -- even merely from the stance of literary and theatrical…
We use cookies on our website to give you the best experience on our website. By clicking “Accept”, you consent to the use of ALL the cookies.
Do not sell my personal information.
Cookie SettingsAccept
Manage consent