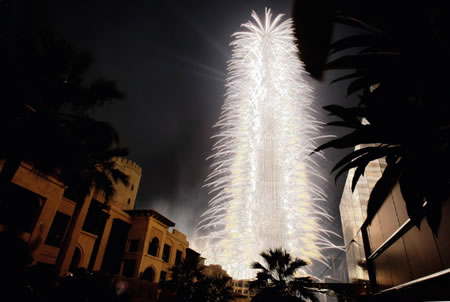 A building that is a brand: Dubai

In the concatenation of buildings that range along the spine of Dubai’s central superhighway corridors, there is one that is just off the main thoroughfare that surpasses, by far, any of the other monuments to spectacle and spiraling growth that speak to the legacy of Dubai’s recent history. Having spent time there, in the earlier part of 2009, it was an interesting experience to study, first hand, the concept of Dubai’s early visioning of an international financial nexus — then, just on the spilling lip of collapse. 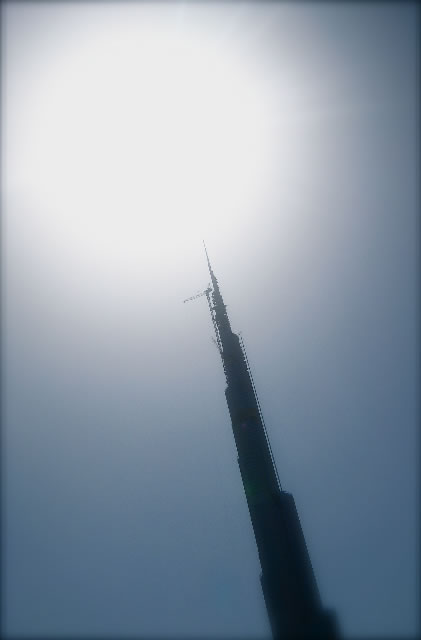 Our experience was first hand, having dedicated hundreds of hours to Investment Dar’s venture, the World, a conglomerate of man-made islands, shaped in a geographic cartography of the world map, that simmered just off the coast of that emirate. That World, indeed, spilled some $60 billion into the red and was a key attribute in the many collapses that failed in the fabled kingdom. One might proffer that it’s about a dream, that in many instances, built on the propositions of greatness and a sense of long-term sustainability that rested in a flurry of international investment invitations. When the world came down, literally — The World came down too. 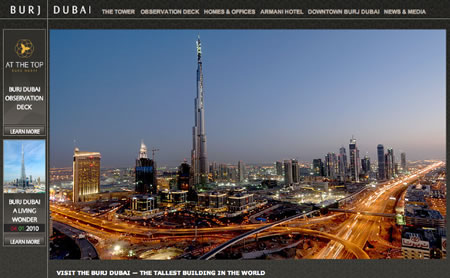 Dubai real estate and planning dreamers presented this picture consistently. In sitting through dozens of presentations, about growth planning, development goals and expected outcomes, this optimistic framing was an ongoing phrasing. “We will. It will be. It shall.” And now, of course, it didn’t.

I’d been part of a delegation on a trade mission, exploring the U.A.E. Originally, for me, it was a chance to meet the team from Dar. But by then they were literally out of commission. I wandered. And I wondered. In exploring the Burj, spring 2009, the presently ranked tallest building in the world, it was under construction — instantly for me, there was a mnemonic to the “Sky City” concept of Frank Lloyd Wright. 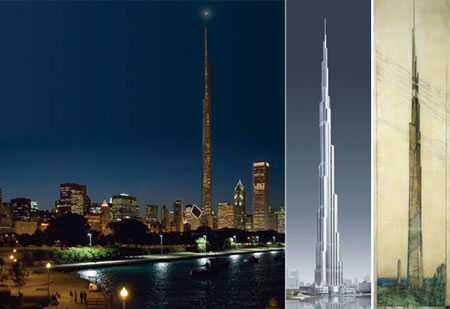 Obviously, given the editorial notation, others have been similarly struck with the resemblance. The point of differentiation, of course, is the idea that Wright was terrified of the despicable character of urban sprawl, in his beloved home town, and considered the concept of a building — the Illinois, at somewhere over the top of 5,200 feet — an elegant solution to sending that population skyward. Burj Khalifa / Dubai is more the spike of luxury, than anything accessible — even in the construct of a crashed and mothballed construction and development market — and the supposed positioning — that units can be had in the condominium level for only $2,000 per square foot. Such a deal. 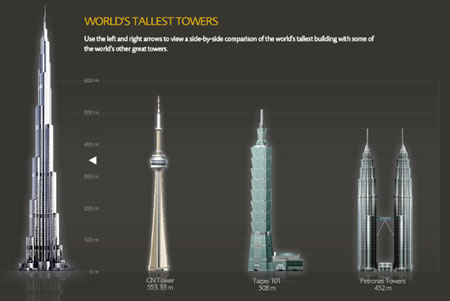 Last year, during the travel run through the Middle East, construction was still underway (4 years in the making), with Dubai’s urban cranes, attached to the building, as they levered materials up to the uppermost levels. And the mere vision of that structure was something of a fascination to me. Not necessarily that it was the tallest, alone, but rather the sheer volumetric character of the spire — standing there, out in the desert, as a spike that stood nearly unchallenged, by the fabulous height of the spike. Traveling around the city, and observing it from its base, I kept photographing it as a sort of atmospheric anomaly — a new concept of weathervane. Approaching the city from the desert, it stands as a pinnacle of light that is other worldly; and that’s the component of interest for me, from an aesthetic review — a kind of lighthouse, viewable from nearly 60 miles.

I had a chance to speak with the CEO of Emaar, H.E. Mohammed Bin Ali Al Abbar, at his home.  The point to Emaar’s planning was to create a vertical city and, to His Excellency’s positioning, the greatest monument in the world, celebrating Dubai’s visionary grandeur. Educated in Seattle, at Seattle University, there’s a fond link between him and our region. In fact, there’s an ongoing contingent of students from the U.A.E. in Seattle.

There’s a curious alignment in the concept of building and brand. Our work has been about examining the relationship to a brand, to a building, in making a place. There are layers, of course. Patterning can be both a kind of psychic reflection of experience and textural / physical expression (you feel the place) or that sense of patterning might be distinctly attuned to the conception of brand and “indices” of patterning, to build place experience. We believe that the sense of patterning is not only modernistic, but as well, ancient in character to the sentience of environment. It might be, to the contrary positioning, that it’s not about the brand that is in the place. But rather the brand that is the place.

It’s been pointed out, potentially, that the completion of the Burj will be the new brand of Dubai — that somehow it will make the city, support the positioning of the sheikhdom. That idea might fit well with the earlier legacy of Dubai being a kind of trading mecca, in more ancient arab traditions — that, frankly, there wasn’t much there, so the survival of the tribal communities was built on the concepts of trading and exchange. The Burj Khalifa (thence Dubai) kind of acts as a new city in a city, a beacon that reaches to the horizon. And the very shift of the name itself expands beyond the region. The Khalifa titling shift represents a positioning to honor His Highness, shown above, pulling the curtained cord with Sheikh Mohammed Bin Rashid Al Maktoum, UAE Vice President and Ruler of Dubai.

When building brands, are you constructing a building that is the edifice itself — the story of the brand, the place? Or are you building — creating — a proposition that is simply that: a building?

Writing a mission: designing the promise of an enterprise

Visioning mission, promise, proposal, proposition and the inculcation of values, notations on design thinking and strategic attention. "Vision can be written, it's scribing a dream; it's a designed evocation -- a voicing. Mission is that act -- in daily envoy -- the promise progressively, that will carry that, and send that action out into the…

Scent and the fragrance of place

Dawn Clark|photo Perfume, memory, sentience and wandering; exploring the fume of an experience. Getting around, wandering, I find myself not infrequently smelling my way through places. Scent is memory; it's the definition of recollection in experience. You can recall an experience, a place been -- and you can name the scent of place. It's interesting…
We use cookies on our website to give you the best experience on our website. By clicking “Accept”, you consent to the use of ALL the cookies.
Do not sell my personal information.
Cookie SettingsAccept
Manage consent