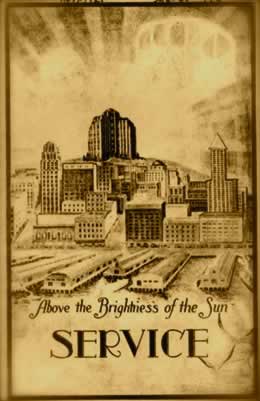 Storytelling the birth of emergency care in Seattle — and the US.

How many of us have been in an ambulance? How many in an accident? An emergency room? A trauma center?

Personally, I’ve been in none — as a patient. But I’ve guided many to them. I’ve ridden in ambulances, I’ve supported those being transported, I’ve taken plenty to emergency rooms, and watched over triage in play.

And studying the speed of the work, the reactive call to action, the administration of critical response, it’s an extraordinary thing to see. And for others, to emerge — treated, surviving, living onwards, repaired and renewed.

But, to the opening query, how many know that the real foundations of emergency care began in Seattle?

And therein, our story. 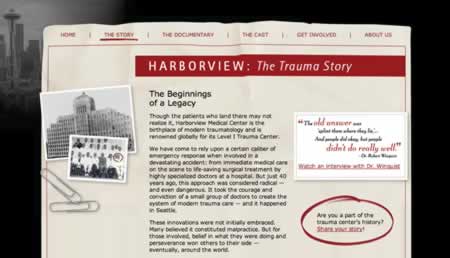 While we’ve worked with hospitals, physicians and their practices, Universities, research groups and wellness organizations, telling the story of the development of trauma care is truly captivating.

Our relationship began with the keeper of the light of the vision, Dr. Robert Clawson.

To quote our recent recantation for the launch of the site, “Though the patients who land there may not realize it, Harborview Medical Center is the birthplace of modern traumatology and is renowned globally for its Level I Trauma Center.

In fact, the standard that has emerged is recent: “we have come to rely upon a certain caliber of emergency response when involved in a devastating accident: from immediate medical care on the scene to life-saving surgical treatment by highly specialized doctors at a hospital. But just 40 years ago, this approach was considered radical — and even dangerous. It took the courage and conviction of a small group of doctors to create the system of modern trauma care — and it happened in Seattle.”

And the responsive treatments where not without the burden of the new idea: “these innovations were not initially embraced. Many believed it constituted malpractice. But for those involved, belief in what they were doing and perseverance won others to their side — eventually, around the world. But a convergence of ideas at the “hospital on the hill” in Seattle would lead to a new way of handling trauma victims and the creation of the first Level I Trauma Unit.”

And the story of emergency care in an advanced treatment unit, flourished with a newly founded partnership, for “while the Harborview doctors were revolutionizing trauma patient care at the hospital, others were changing the way patients would be treated at an accident scene. This led to the establishment of Medic One, the country’s first paramedic response programs, in conjunction with Harborview and the Seattle Fire Department.”

It was a critical step — an expansion on the thoughtful alignment of teams for nurturing survival: “Patients who previously would have died at the scene were arriving at the hospital alive, with severe injuries, and the need for a comprehensive trauma center became apparent.”

All of these tellings are newly summarized in the production: “Harborview: The Trauma Story, a documentary film that tells the little-known history about Seattle’s hospital on the hill.

Our teams are proud to have shared in the development of this telling, the evocation of a story that reaches back in time, in foundation, newly created and told in recognition of the innovation.

Examining the concept of set design, visuals and production reflected in experience and branding: It took me a long time to determine whether this structure for the film Quantum of Solace was real, or a production design concept for the movie. As it was, the building exists, it's the Residencia, or housing for scientists for…

Healing, storytelling and the wisdom of Aesculapius One would presume that physicians are storytellers -- guiding patients in transitions that are gathered from layers of experience in the sphere of living, teaching, healing, and the practice of medicine. Many are not. The whole notion of bedside manner, per se, is about sensitivity of counsel. And…
We use cookies on our website to give you the best experience on our website. By clicking “Accept”, you consent to the use of ALL the cookies.
Do not sell my personal information.
Cookie SettingsAccept
Manage consent