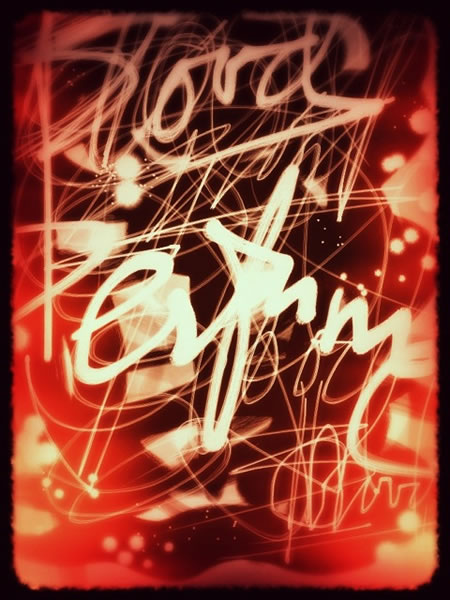 I pricked my finger while I was sewing a torn shirt, and put the wounded in my mouth, to stop the bleeding. Taste. And scent. They go together, and it set me examining the salted, the metallic nature of the sanguine — the perfume of blood.

The word blood is spattered with history, and while some might presume the origin speaks of life force and vitality, instead it’s more descriptive. In the ancient phrasing, it might have been a hidden or sacred word — amongst the ancient Germanic tribes, it was unspoken or taboo. Seed sounds, from the beginning of spoken time, words for blood were the PIE roots like *esen — aligned with the poetic Greek rendering, ear, the Latin aser, the Sanskrit asrk, or the Hittite eshar). Scholar Douglas Harper offers:

Old English — blod, from the Proto Germanic *blodam (by reference — Old Frisian blod, Old Norse — bloð, Middle Dutch bloet, Old High German bluot, German Blut, Gothic bloþ), from PIE *bhlo-to-, perhaps meaning “to swell, gush, spurt,” or “that which bursts out” ( Gothic bloþ “blood,” bloma “flower”), in which case it would be from suffixed form of *bhle-, extended form of *bhel- “to thrive, bloom” (see bole). Also *krew-, which seems to have had a sense of “blood outside the body, gore from a wound” (cf. L. cruour “blood from a wound,” from the Greek — kreas “meat”), which came to mean simply “blood” in the Balto-Slavic group and some other languages.

— Inheritance and relationship senses (also found in Latin sanguis, and the Greek haima) emerged in English by mid-13th century.
— As the seat of passions, it is recorded from 1300.
— Slang meaning “hot spark, a man of fire” [Johnson] is from 1560s. Blood money is from 1530s. 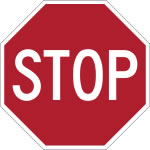 Blood red has a line — and a visceral power; the color red can be seen as the most striking and alarming by virtue of its affinity to blood, perhaps — or merely the contrary nature of its contrast (1). Stands out.

And the spread of the color, the bloom — as in the etymological notations, is like the character of scent — there is a drop, and it blooms, it waves out — rippling fragrance; which might be like a flower, it might be like something more — the water that grows and flows out there, into the space that contains it. And red can speak as a symbol of guilt, sin, passion and anger — often as connected with blood or sex.

Red and blood have emotive bridges — the sight of it; but what of the scent of it? One might characterize the concept of perfume — the par, fum(e) — as the smoke of ingredients, as in through fumes, but in examining the history of scent making, it’s the translation of the essence — and how this gathered assembly wafts, oils, mists, sprays, congeals, cakes, rubs or is crushed, macerated, burned and interpreted in the miracle of the art of perfuming. And blood, too, is a moving form — pulsing and flowing, moving the rhythm of the most sacred beat — heart surge. Blood flows through it.

The channels of experience and sensation flow with the blood of physicality — and too, on the wafts of wind, as scent makes its way, circulating the mist of fragranced molecules. It flows. And like the allegory of perfume being known as juice — so too blood, the juice of life. 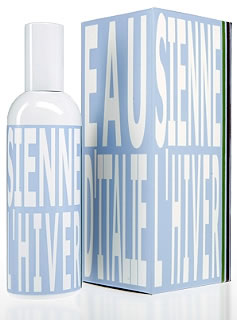 My first encounter on the nature of blood and scent came in a meeting with Sebastián Alvarez and Marina Sersale, Eau D’Italie, the story told here. But in their reference to one of their fragrances — created in 2008, they noted one of the characteristics of this perfume of Fall, Tuscany — importing the metallic salt of blood, on frozen iron. It’s founded in this sequencing: Egyptian violet, Geranium, Fern — the blood accord — Iris, Mimosa, White Truffle accord, Black Olive, Paraguayan, Egyptian Papyrus, Virginian Cedar and Benzoin. Created in a partnership between the owners of the brand and legend Bertrand Duchaufour (this being one of his favorite perfumes) — it’s one of the first perfumes that I scented that had an environmental connotation — it was a perfume of place.

In Science News, there’s a link to the metallic odiferous noting that we experience, “The smell of iron upon contact with skin is ironically a type of human body odor,” states Dietmar Glindemann. “That we are smelling the metal itself is actually an illusion.” In conjunction with a team of researchers from the Virginia Polytechnic Institute and State University in the United States, The University of Leipzig and the Leipzig Environmental Research Center, Germany, he has tracked down the responsible scent molecules.” The scent of iron, in touch, is the scent of the human. According to their analyses, “Seven test subjects immediately recognized the “musty” metallic odor when their hands came into contact with metallic iron or a solution containing iron ions with a twofold positive charge. In contrast, solutions of iron with a triple negative charge did not cause the odor. Analysis of gas samples from the skin of the test subjects pointed to a bouquet of different organic compounds that seemed to be characteristic of the metallic smell.” And in rubbing blood over the skin — or blood coming to the skin’s surface, that perfume reappears — based on the same scenting principle from a molecular standpoint. Glindemann — to the perfume of blood, “That humans can ‘smell’ iron can be interpreted as a sense for the smell of blood. Early humans were thus probably able to track down wounded prey or tribe members.” And blood, in profusion, has a distinction — in war, the scent calls: horror.

“Blood is not essentially terrible. It is about life. But it smells. Stay in a hospital during a war and you will become accustomed to the chemical smell of blood. It is quite normal. Doctors and nurses are used to it. So am I. But when I smell it in war, it becomes an obscenity.”

I smell blood. I smell the blood of a…man.
Contemplating the rhyming phrase, I wonder on the truth of it: 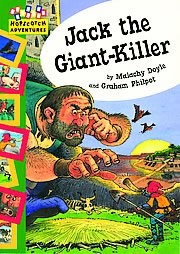 A backgrounder? “The phrase has no allusory meaning and, apart from when quoting Shakespeare or Jack the Giant Killer, there’s little reason ever to use it.

It is best known from the nursery rhyme – Jack the Giant Killer:

Fee-fi-fo-fum
I smell the blood of an Englishman.
Be he alive or be he dead
I’ll grind his bones to make my bread.

The source is unknown in timing, and the phrasing is anonymous — perhaps sometime before another reference that actually refers to the poem — before 1596. It is referenced in a notation by the English dramatist Thomas Nashe, in Have with you to Saffron-walden, 1596:

“O, tis a precious apothegmatical Pedant, who will find matter enough to dilate a whole day of the first invention of Fy, fa, fum, I smell the blood of an English-man.”

“Child Roland to the dark tower came,
His word was still, Fie, foh, and fum,
I smell the blood of a British man.”

The idea of scent, and blood, and identity ties to the mnemonic character of fragrance — people wear scents that have a personal meaning, an evocation; “yes, I’d like to smell like that.” Or alternatively, “I’d like to smell like this: — this is a memory from my childhood, my father, I smelled this when I was there, I smell my mother, my kitchen, my time at the farm, my time fighting forest fires, my moment in Paris with Chloë, the forests of Kyoto — my…”

Whatever, you go back. And (your) blood could be there.

Other perfume designers explore the idea of blood — like Black Phoenix Alchemy Laboratory, whose formulae reach to the gothic dark mascara of scent admixtures — and the blood accord. Their oils mix devil’s blood — in the allegories of dragons, musks, corrupted plums, opium and and a trove of medieval magic lore. 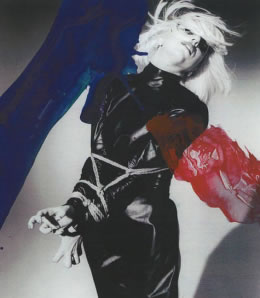 Lady Gaga has taken the notion to another tier, according to Lauren Sherman’s Fashionista reference, “Gaga’s Fragrance Will Reportedly Smell Like ‘Blood and Semen.'”

She notes –“You can’t make this stuff up. According to sources in the fragrance industry hired to develop Lady Gaga‘s first fragrance, the pop star has requested that the scent “smell of blood and semen.” The idea is mildly shocking, but Gaga is not the first person to think of it.” The scent is due in 2012 — but Gaga comments that the scent isn’t just that —

“No, no, no. Actually the perfume smells like an expensive hooker.”

She added, “I wanted to extract sort of the feeling and sense of blood and semen from molecular structures, so that’s where [the rumors] came from and that is in the perfume but it doesn’t smell like that. The semen will be the scent from sex and the blood part was taken out of my own blood sample.”

Good to know, wait for it.

There are other more obvious perils, that is to examine the idea of building a brand that’s wholly founded on “blood.”

From their site, these notes —

“A, B, AB and 0, retrace the evolution of manhood through time and its record of information, history and mutation, so well kept in the vital flushing of blood.

BLOOD CONCEPT is a mystic ritual with no flowers to be found: deep as primeval Africa in 0‚ aromatic as the scent of familiar land in A, bold as unpredictable itineraries in B, bold and sharp as a metropolitan skyline in AB. Ending each time with the same subtle and mysterious note: a metallic vague suspicion.”

One illustration from their product grouping: 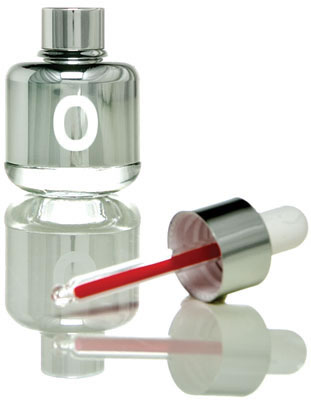 It’s a unisex scent — visceral and intense, from the depths of the earth — it’s carnal and primitive. The Lucky team notes that Antonio Zuddas and Giovanni Castelli’s ideas are focused on metaphors — using the primordial idea of blood — from the oldest blood codes to the newest combined with the clanging character of the base quality of metallic accords. 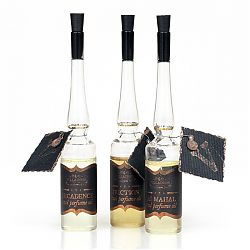 FULL NAME: Blood Perfume Oil
SPECS: 5 ml meted out in our vintage glass ampoule.
DISTINGUISHING FEATURES: Our concentrated fragrance blended in a long-lasting, skin-silk vegetable oil base. CHARACTERISTIC SCENT: Our take on this very vital fluid is a full-bodied spiced Merlot grounded in dry fig and inspired by a ripe bouquet of berries.

Blood as a scent isn’t limited to humans, nor the beautiful alone — spiders use it for hunting, it is the cruor of attraction; that scenting can be even mythic, in the founding of the world stories of Pacific Northwest tribes and Raven — who can always smell blood; men and women connect sexually with the subtle scenting of blood and cyclic influences. Odor is primal as a sentient expression — we can detect predators, scent food, find mates and enable pleasure; scents can betray danger. And, coming down to the most profound scents — the liquid flow of hemoglobin, the claret of life — would have a cherished and perhaps misunderstood scent.

Sometimes the most profound scent experiences waffle between the marvelous and the disdainful. Some perfumes start with one note, and move to another — and finally another, with the heat of the body, they transit to the lower equation of notes — the base foundations which simmer on the surface. And blood, too, will transit — being organic — breaking down to other evolutions.

And like the flow of air, pushing the scents into the point of experience — smell — blood flows, allowing that sensation. Perhaps the inversion of the metaphor of flow — one, to life support, the other to the mist of fragrance combine to add yet another dimension in the journey of the olfactive wanderer.

Tim | NYC
––––
Meditations on the nature of perfume
Girvin ScentDesign

APPLE.COM FINDING FIRE IN THE IMAGINATION OF INVENTION. M E D I T A T I O N S + M E M O R I E S iSad. These days, I’ve been writing, talking, consulting in the proverbial strategy — a great deal — about the invention of new pathways in brand development. And…