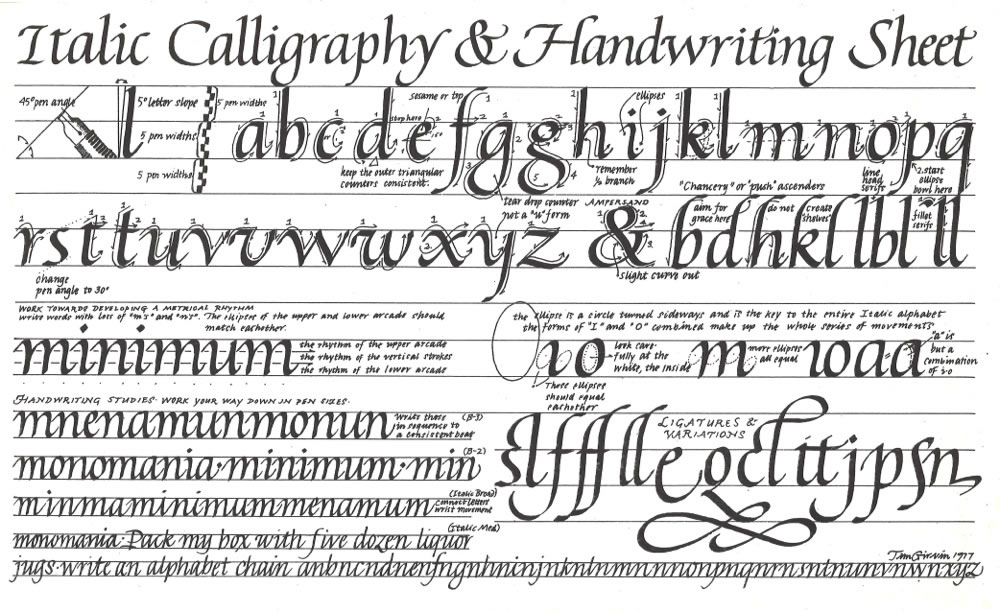 Sometimes you go back to go forward

There’s a noun that is oftentimes used in contemporary parlance: “creatives,” as a description for those that work in creative and maker space. It’s an interesting idea, using an adjective as a noun, but it works.
I was sitting at a “excellence dinner” at the creatives table.

I looked around and wondered — “these are creatives.
So in what manner and how?”
I talked to each of them to learn more —
a scientist, a professor, a leader and a theorist.
I suppose that works, to each creative,
their own pathway of creativity.

But it made me wonder about
creative journey and curiosity.

In the storytelling of our lives, we look back to the points of inspiration and magical points of inception — collisions of ideas, people, good fortune and open-minded exploration and expansion, when things began to click in a way that sparks the ignition of a new universe. As a child, as a budding draftsman, I practiced along with
another stellar TESC graduate,
Jim Cox.

He and I used to draw in my basement in Spokane, on the floor — inspired science fictional visions — each scribbled drawing accompanied by sound effects in its making.
“Draw something,
you should know how it sounds —
and make them while you’re drawing.”

That set a course of the hand for me, the hand-made, and that which the mind can dream and the wrist can bring forth to a state of personal aliveness. I kept at it. And even later, I continued drawing — my assignments and reports in school mixed with text and illustrations, shining stories and ideas. That idea of linking text — words in storytelling with pictures in visual narration continued to evolve. Curiosity lent direction — I’d keep moving out, to new stories, new worlds
and historical re-imaginings.
These became books.

From the books came other studies.

Like — “what is the history of how these were made?”
As I walked back down those pathways —
the ancient libraries, the mystical corridors,
the misted boulevards of scholarship —
my heart opened.

That was one opening.
And there were others.

And that’s the point — there are moments in your life when your heart flowers, it opens up to a learning, an idea, an inspiration and it lies — opened — and forever altered.
That link for me — words and drawings, combined, led me all the way to high school and college. At New College [Sarasota,FLA,] before Evergreen I studied marine biology and comparative physiology. I made science project journals — drawings and lettering. 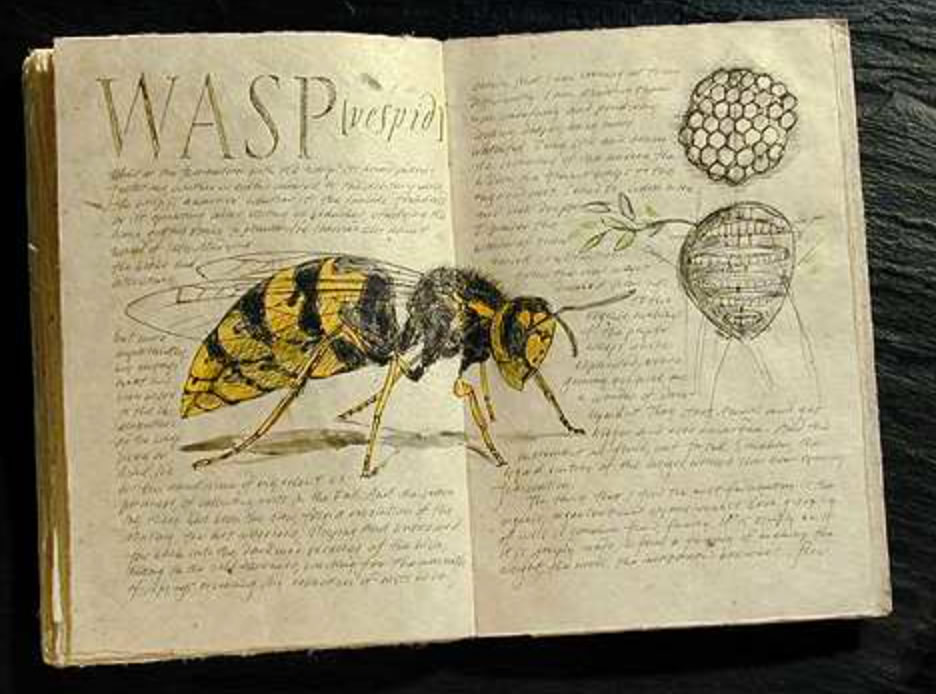 With a sidebar in medieval History.

If you study the history of the book, then you examine the palæography of the evolution of the scripted word, then you reach further — you’re reading ancient languages and disciphering their draftsmanship. You might ask, as did I — what tool created these ancient words, and what is the meaning of these distant voices — what is the history of this word?

With that, knowing more, I made another flowering point in meeting Lloyd Reynolds, a kind of maestro of the lettero/typo/calligraphic arts at Reed College. I’d drive down there in Ruby, my 1959 Red Dodge Pickup — hang out at Reed, Lloyd’s house, Portland, browse his fabulous library.

Steve Jobs for one, credits him with being his typographical mentor in embodying the design of font systems at Apple. And that is how, too, I met and worked with Mr. Jobs —
through that flowering. At Stanford, I walked up to Steve and said — “hey, you went to Reed, do you remember Lloyd Reynolds?” With some follow-up notes and wildly calligraphic art in the mail, he said, “hey, can you come down here tomorrow — talk to us?” That was the beginnings of “how the mouse works — can you draw with it?” I did, and went on to a string of other works for Steve Jobs and Apple — Mac, Performa, WWDC for 4 years in a row; then NeXT.

But this is before slightly my time at Evergreen — I was focused on one fluid craft — the calligraphy of the Italian Renaissance, a kind of exemplar of classical intention, flowing and lively — the epitome of muscular movement of the hand, in a tradition and transition of nearly 2,000 years of evolution, the 16th century to be exact. And that arrival came at the transformation of hundreds of hands — calligraphic handwritings — that coursed from pre-Christian Greece, through Imperial Rome, through the Carolingian Renaissance, the dark ages of Medieval Europe, the age of the Italian Humanists — and finally, the Italian Renaissance of the 14th-16th centuries. I drew them all on great rolls of butcher paper from the Graphics Lab at TESC.

But I wasn’t looking for duplication of paleo-scripts — I was reaching to illustrate language, to make it shine.

That journey was a cumulative gathering that spoke to rekindling and teaching small workshops at The Evergreen State College, as a way to help with my student expenses. 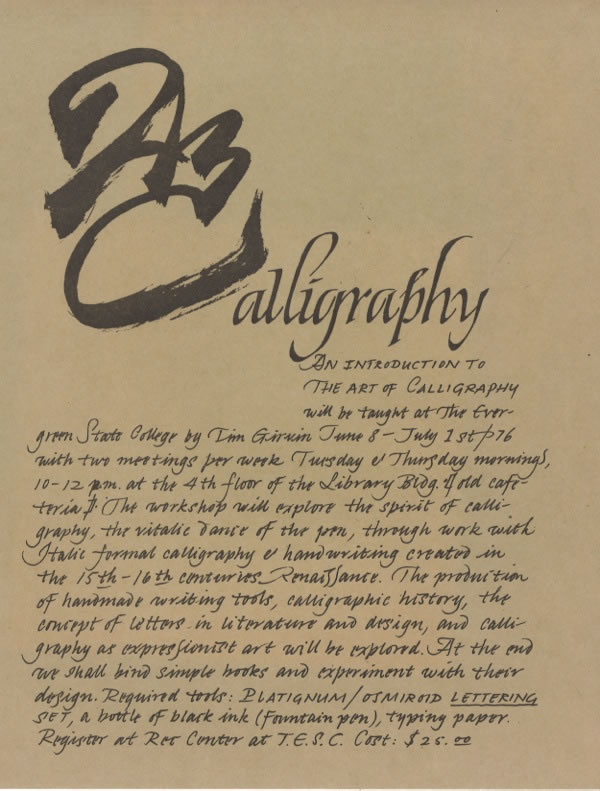 How that journey might be extended lies in the notion of what, and which, opens the heart of the flowers of discovering.
Now, decades later, I teach other students, designers at Girvin, the brand strategy and design firm. 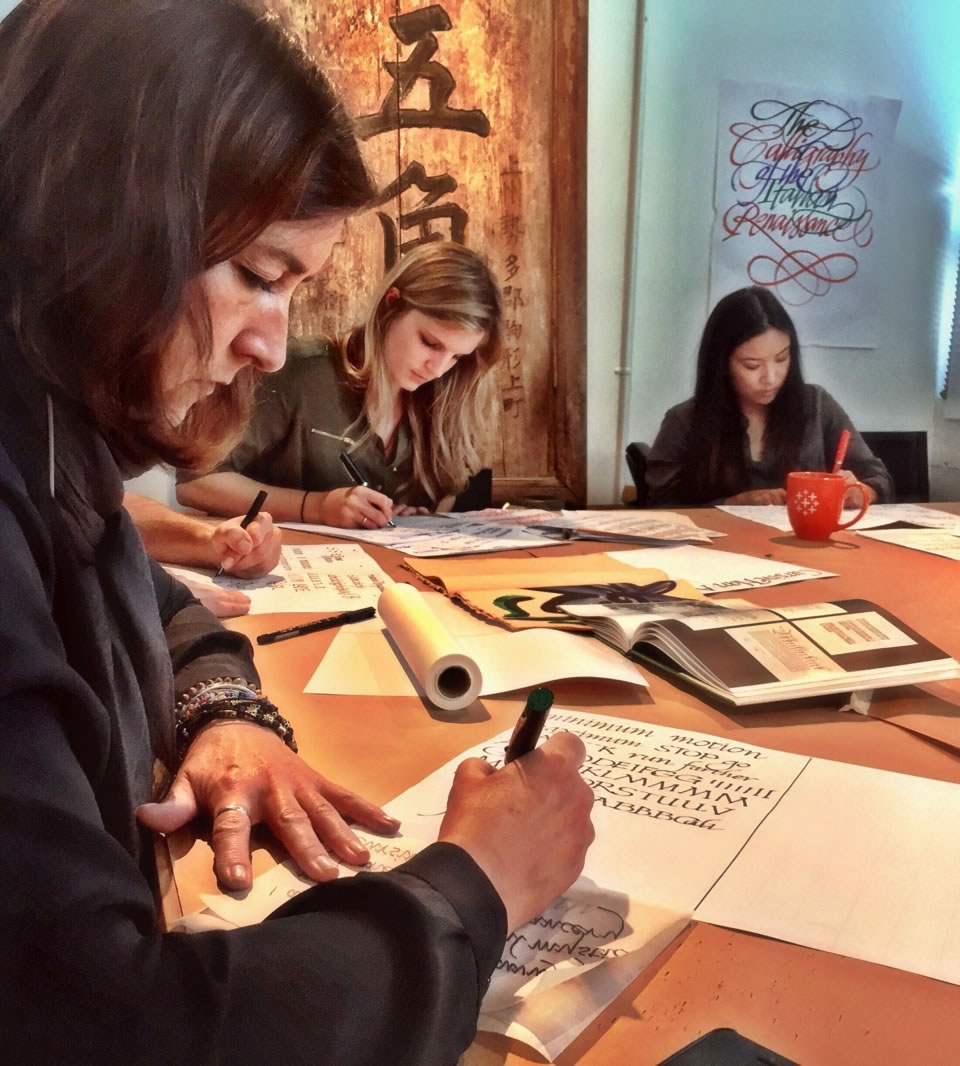 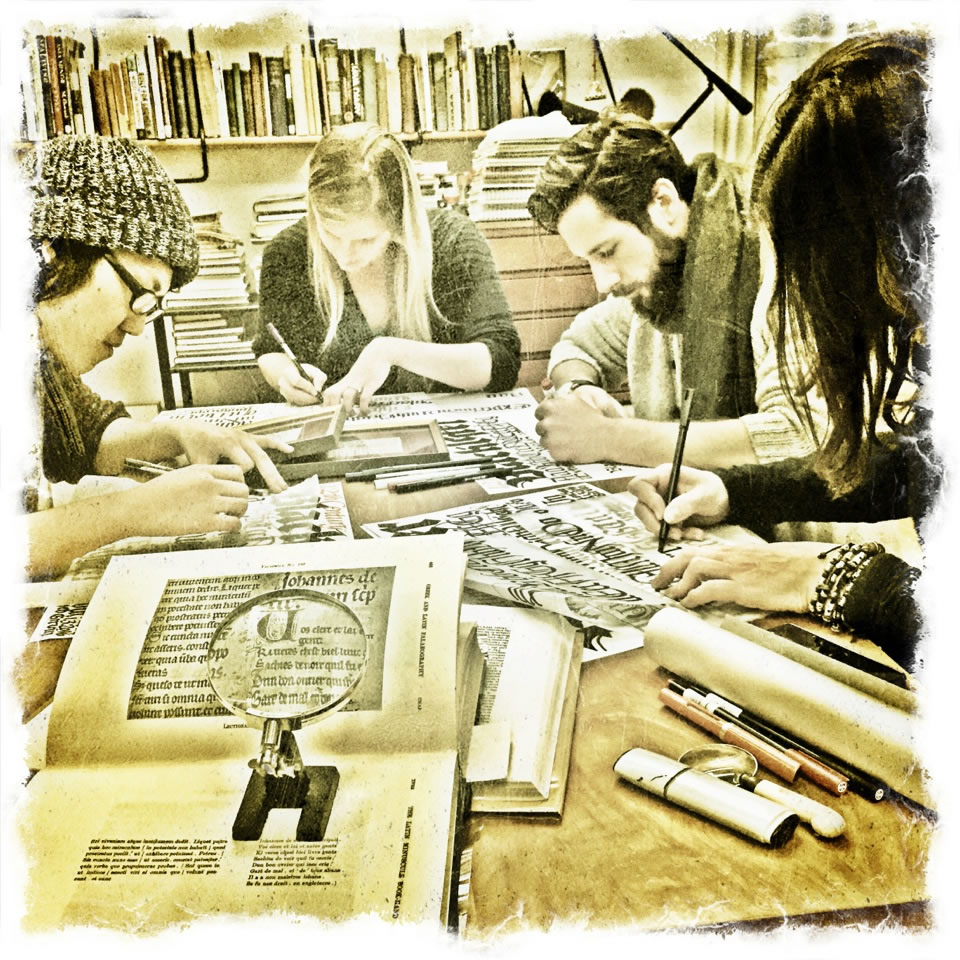 This year, for Girvin, that’s 40 years of work.

And The Evergreen State College, for me, it was, and is, about discovering — and recovering — those flowers of discovery,
the foliation of ideas, the instances of opening.
Life changes — forever. 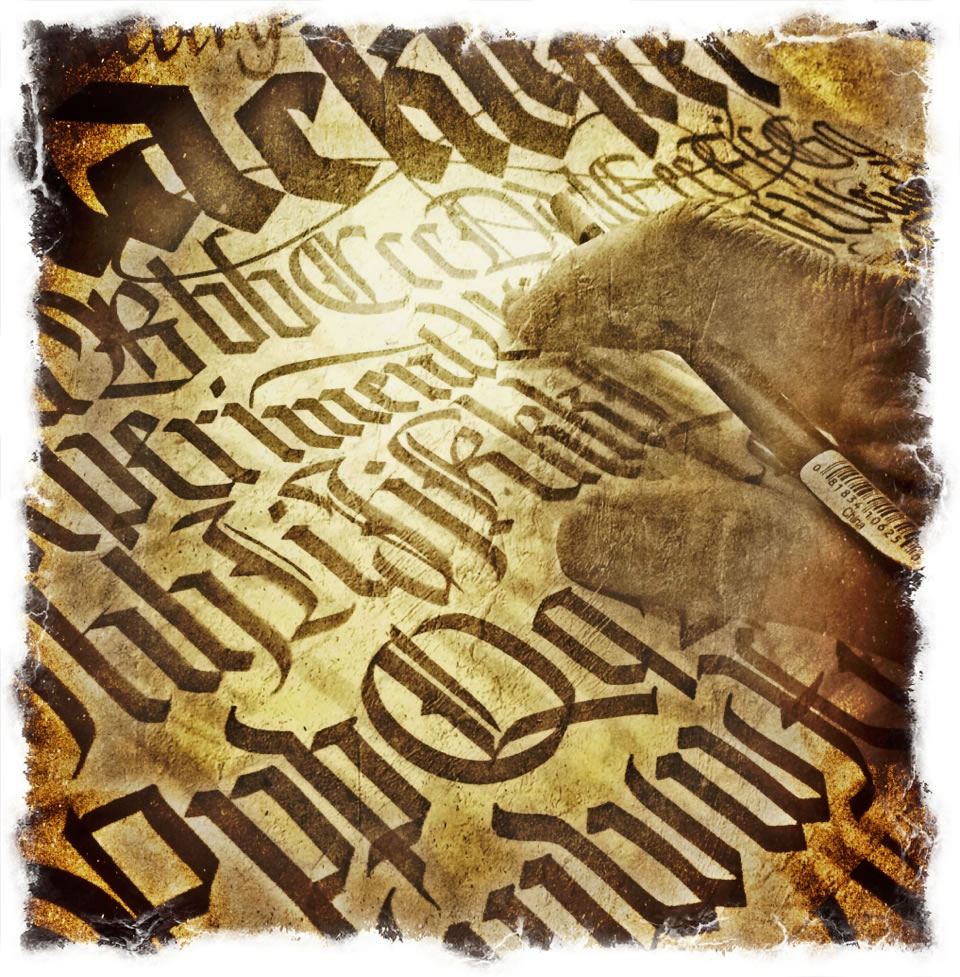 What happens is that once
that cultivation starts, it continues,
if you’re listening.

I go back,
I go forward.
Looking for the patterning of flowers
that have opened my heart.

Look out, look up, look in

PRINCIPLES OF ABOVENESS THE STATE OF WOWNESS* IN THE NATURE OF SEEING, THERE ARE DIRECTIONS – THE VECTORING OF PLACE AND SITE, SIGHT SEEN AND UNSEEN. BUT IT DOES COME DOWN TO THE LOOKING – AND THE LISTENING IN THE LOOK. AS ONE STUDIES ANYTHING, THERE IS THE REACH BACK TO THE CONTEXT OF SENSING…

THE MARK OF A PORTAL; THE CULT OF THE SIGIL

Designing Magic: The Draft of the Letter as the Quest for Mystery Everyone knows that occult really means hidden. But in that, one might surmise that the Cult of the Occult would be nothing more than the quest for the hidden. I probably live there, in more ways than one. I like to dig in,…
We use cookies on our website to give you the best experience on our website. By clicking “Accept”, you consent to the use of ALL the cookies.
Do not sell my personal information.
Cookie SettingsAccept
Manage consent