The History of the Hammer 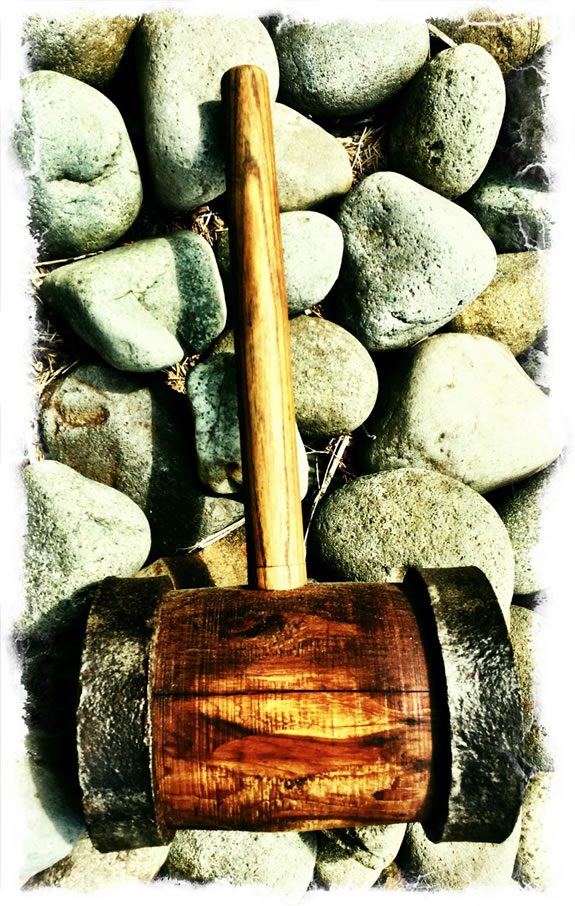 The Tool, the Allegory, the Legend

I’ve been using hammers.
And collecting old hammers.
Have you tried working with multiple hammers, their wood and metal shafts, their weighted mallet heads, explored how they work?

The weight, the heft, the swing,
the balance, the impulsion: 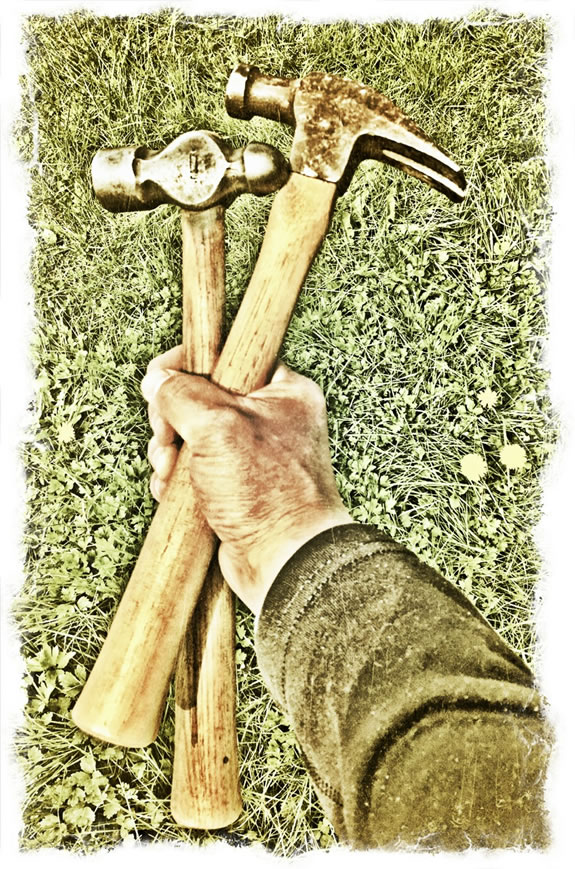 Like saws, the design of every part of the hammer counts,
from the weight of the head, to wood of the handle shaft, the length of the balance — and the detailing of how these come together — the expansion of the shaft, split or expanded, nocked or wedged at the head, ensuring no free-flying hammer heads.

As I’d referenced earlier in the spirit of wabi sabi, is an aesthetic of objects made beautiful in use — coupled with an honest and simple intentionality of design and function. Like, for example, a great tool that’s been in your family for a generation.

But to a deeper psychical space of experience, wabi sabi is an untranslatable abundance of deeper meanings; it is a contemplative loneliness, a solitude of the recognition of transience
and perpetual dissolution —
everything goes that way.

Old happens.
And that can be beautiful. 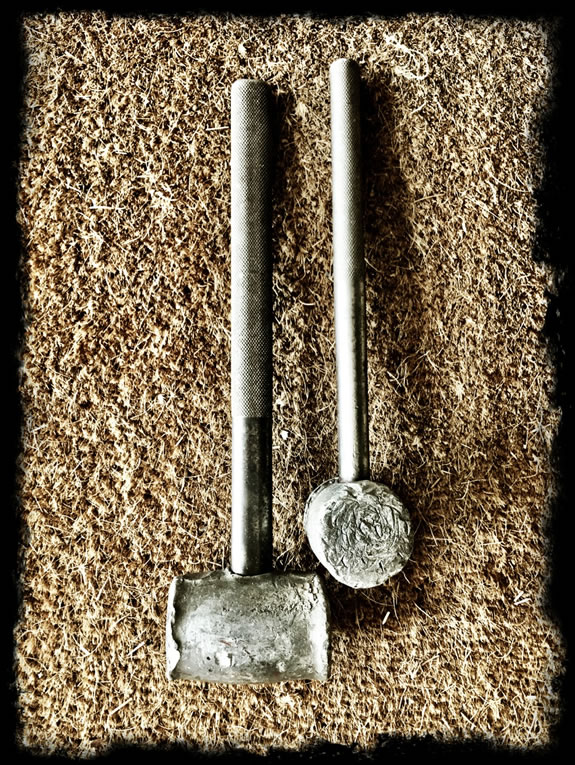 Things get worn down, get older, elaborate designs get simpler, and more functional — so, to physical characteristics of wabi wabi, it does come down to two shades of visible meaning:
rustic utility and aged beauty. 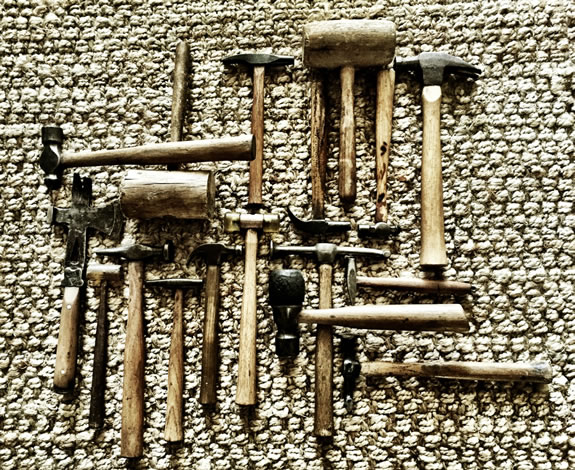 When I study
the hammers,
I contemplate the idea of
designing something to be used,
perpetually, as a whacking tool —
“hammer” is an ancient word,
and it has been called the most primordial of tools, and in fact, a foundation device in tool making.
The hammer is part of early forge work —
and the strike of the hammer on the anvil is a sound long associated with the farrier and the weapon smith — who uses another kind of hammer, to drive hoofing studs into horseshoes.

According to Industry Edge, it’s the kind of tool that would’ve been used a half billion years ago. According to Whitney Richardson, in her toolbox overview,
the hammer is considered one of the “staples of a toolbox (including staples themselves). As one of the oldest devices in use today for tasks requiring a significant impact, the hammer can take on many forms for each task.”

As she notes, “according to Encyclopedia Britannica, the term “hammer” can be used “in a general sense to cover the wide variety of striking tools distinguished by other names, such as pounder, beetle, mallet, maul, pestle, sledge and others.” But most recognize the basic hammer as a tool with a weighted head attached to a handle for leverage and impact.
As one of the oldest devices in use today for tasks requiring a significant impact, the hammer can take on many forms for each task.
Hammers date to Stone Age, with early models typically involving a stone, as the head, affixed to some other material as the handle. Historical examples of this construction include the roughly 500-million-year-old London hammer, discovered by Max and Emma Hahn circa 1936, which features a wood handle and rock head.”

The veracity of the archaeology as well as the age of the stone has been questioned — particularly in light of a side-barred commentary by Antediluvian creationists. Geological experts point to a more recent burial and stony concretion — as in the last 200 years. 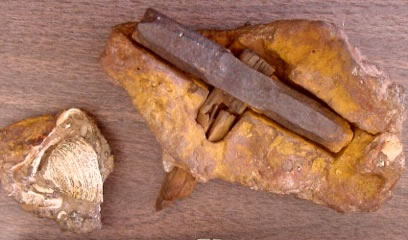 “As its function evolved from more rudimentary impact tasks to assignments requiring more precision, so did the hammer. The head was developed with a flat face for better contact with the object it was hitting. Hammers also began to become lighter to suit their new functions.”

Hammer designs continue their evolution and transit to “the shape of the user’s hand for better grips and more comfortable use, but also the effects of the impact. Tools such as Stanley’s FATMAX Anti-Vibe two-piece hammers further isolate vibration so the user feels less. And, of course, there’s greater variety in the size and style of hammers, from nailer hammers to tack hammers to finisher hammers.”

The hammer is such an apex tool that there has been the establishment of “a Hammer Museum in Haines, Alaska, dedicated to showcasing a variety of contemporary and historical hammers.”

The hammer has a mythical character in the idea of a kind of God’s forge, the hammer as a thunder weapon like Thor’s Mjölnir or the torshammere. From Past Horizons the archaeology of the hammer goes back hundreds of years — even a geological age has been linked to the hammer — the vikings, so-called by the Romans, Etymologist Douglas Harper offers that Ordovician age [following the Cambrian and preceding the Silurian, Ordovices, name of an ancient British tribe in North Wales. The period so called because rocks from it first were studied extensively in the region around Bala in North Wales. The tribe’s name is Celtic, literally “those who fight with hammers,” from the Celtic base *ordo “hammer” + PIE *wik– “to fight, conquer” (which then becomes the foundation for victor).

From an archaeological overview on the Nordic thunder hammer, “Hammer pendants are interpreted as amulets shaped like Mjölnir, the hammer owned by the Norse god, Thor. Viking men and women often wore Thor’s hammer for protection. “It was the amulet’s protective power that counted, and often we see torshammere and Christian crosses appearing together, providing double protection”, said Peter Pentz, an archaeologist at the National Museum of Denmark.
This object is cast in bronze and has traces of silver or tin plating as well as gold plating, and is the first ever to be found with runes inscribed. Pentz is grateful to the unknown rune writer who is at last confirming that these amulets actually do depict Thor’s hammer. Over the years there had been doubt cast on whether these small amulets indeed represent a hammer. Some believe that the shaft is too short, while others believe that the hammer would not have had a symmetrical head such as this one. Perhaps this find will place this particular debate to rest, as the runic inscription clearly reads: “Hmar x is” (“This is a Hammer”).

When I contemplate the meaning of a tool — I meditate on the design, its evolutions and shape-shifting, history and storytelling, if not the mythic dimensions in how it came to be. The hammer as a lightning maker, world shatterer, wall-breaker.

And what that might be, allegorically, to the nature of our design, brand and strategic consulting. What that could come to mean is that the swing of the hammer, is a curve of knowing — that arc can both shatter and impression and harden fast the drive to an idea. 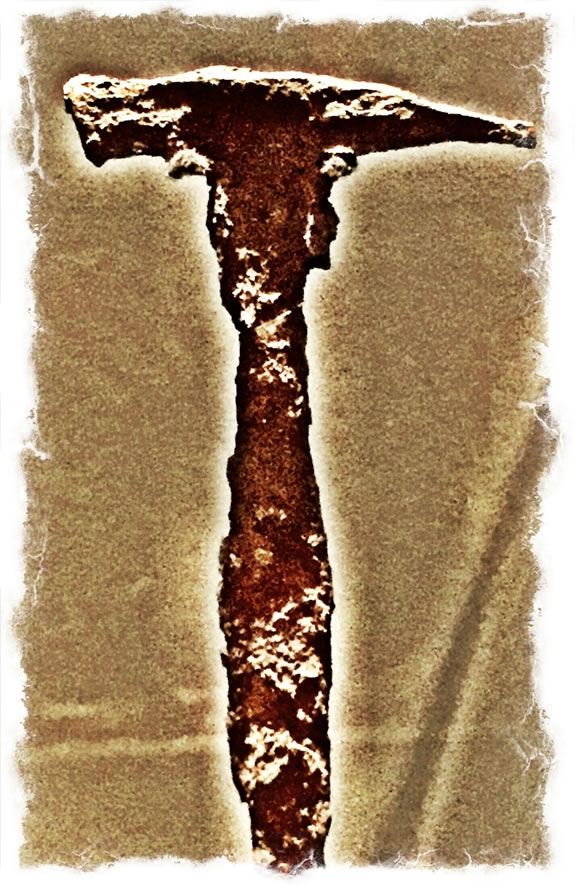 A hammer from Pompeii

What others, then?
The Loom. Knife. Fire.
A Screwdriver. Pencils. A Nail.

Who Do You Love?

Love Brands: Relationships, Commitments and Storytelling. I did this installation, out on a cliff, away from everything, looking out — the deep blue sea. And the sun. And I was “looking through L O V E,” thinking about that ancient question: "who do you love?" "And what do you love?" If I ponder the most…

THE ALLEGORY OF THE WAVE WATCH, THE BOARD, THE TREND AND THE CURL. My first exposure to waves was when I was about 4 years old — my father was a Captain of Surgery, stationed at Fort Monmouth. We used to go to the Jersey shore — and Dad would run me down to the…
We use cookies on our website to give you the best experience on our website. By clicking “Accept”, you consent to the use of ALL the cookies.
Do not sell my personal information.
Cookie SettingsAccept
Manage consent