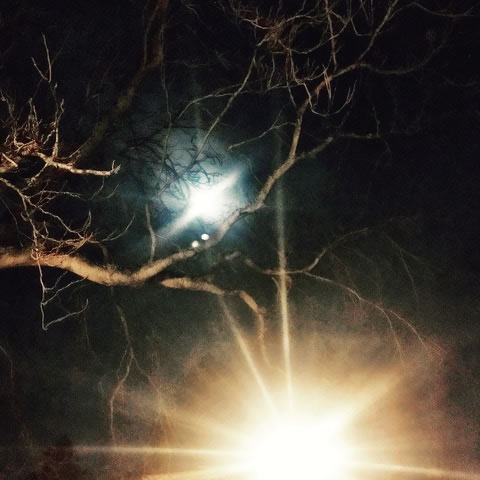 WHAT ABOUT THE IDEA THAT COMES AS A SPARK,
A LIGHTNING BOLT,
A BLINDING BURST OF LIGHT AND SUDDEN INSIGHT?

There is a global mythic legacy of the thunderbolt;
you might recall that there is some familiarity for you—
a lightning strike moment, that you remember something of that instance when you were in the midst of the brainstorm, the bolt of the insight-bearing
lightning blast—
suddenly, you can see your surroundings
in brilliantly polarized light.

Everything is newly apparent, it is crystal clear.

Thunderstruck: a shocking moment that turns into the momentum of a world-churning, freshly sensed experience.

Every detail of the scene,
lightning-flashed. 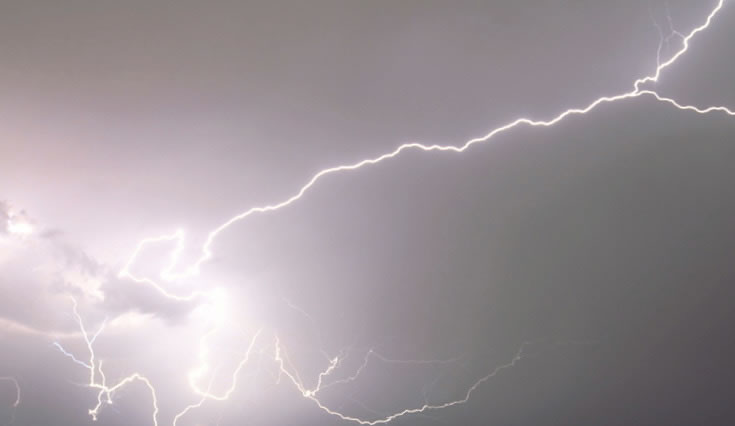 That sense of instantaneous radiance, in mythic context,
is just that: illumination.

In a spiritual context,
illumination is being
“lit up.”

But the thunderbolt as a
symbolic context of illuminative power is ancient.

And some theorized, as in the Thunderbolts Project, a symbolic and cosmic study in alignments between ancient symbolism and the presentation of thunderbolts, electrical energy, sprites, axial energy jets and deep space star clusters.

Stylized illustration of 3-D electric discharge forms
in the plasma laboratory, occurring between two electrodes.
In contrast, the 3-D electrical environment in space
provokes axial jets evolving in both directions
from a charged body. 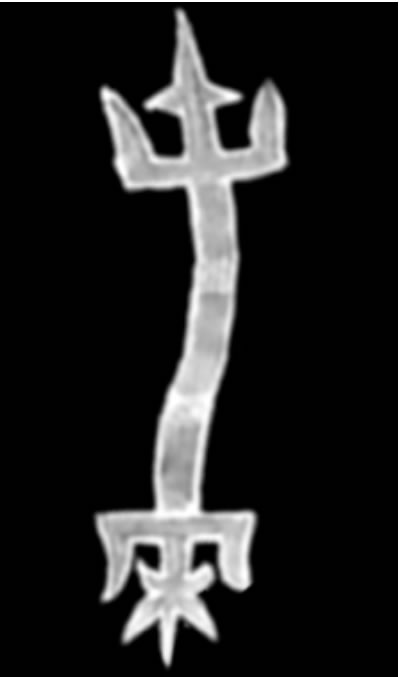 I write about it—symbolic alignments and
experiential strategy because of meaning.

The meaning of the bolt in my individual meditation—
because of a personal lightning strike, a string of events hiking out in the open, cliff-facing, in the mountains—when I should’ve been hiding and protecting myself.

The storm emerged, ran quickly to the hillocks, then rose up the mountain sides—crumpling clouds into roiling lightning-clapping thunder roarers. The roll of thunder coupled with the lightning was an experience of absolutely terrifying proportions. Lightning was repeatedly striking and exploding the surroundings, trees shattering, cliffsides splintering. 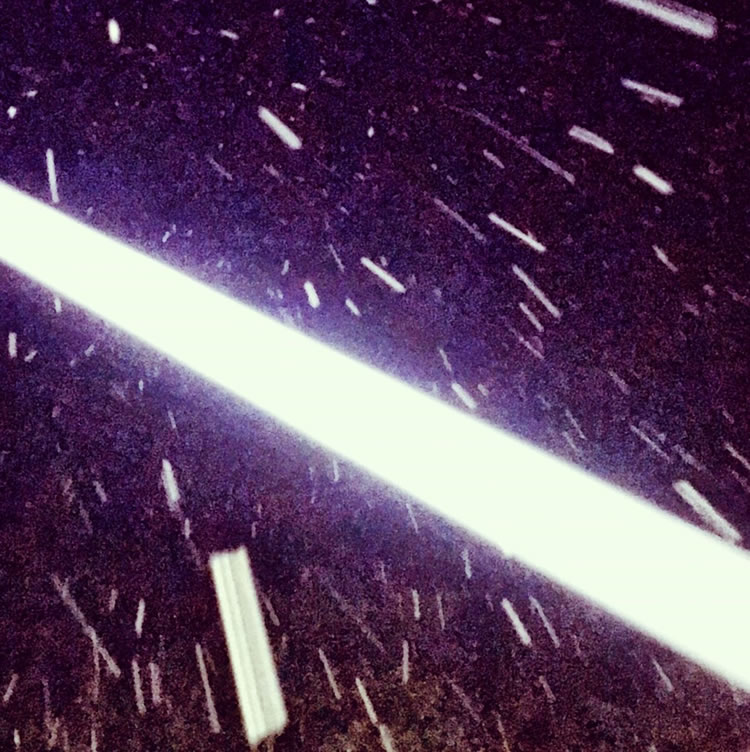 And then there was the scent. It was a rarefied smell of electrified molecules, an ozonic breeze of a strange and peculiar character: fried air.

I had visions of being shocked to death, but instead I was shocked into a new world—clearer, sharper detailing, and what came of it
was the new visioning of experiential captivation.

I first learned about this idea, the thunderbolt symbol during my college years; and it was Lloyd Reynolds, a professor at Reed College, that first talked to me about this idea—the migration of symbols. 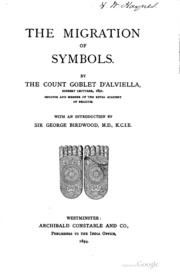 Lloyd had this way of intertwining the study of calligraphy, art history, architecture and palæography as one large grouping of ideas to explore.

And so did Steve Jobs, as you might know.

The idea of the thunderbolt as a symbolic expression hurtling change-making power lies with ancient gods.

Wikipedia organizes that summary as:

— The Torah, the arrows of God, which is
khets חֵץ, is used for the “arrows” of the unnameable,
an expression that dates to 1200BCE. 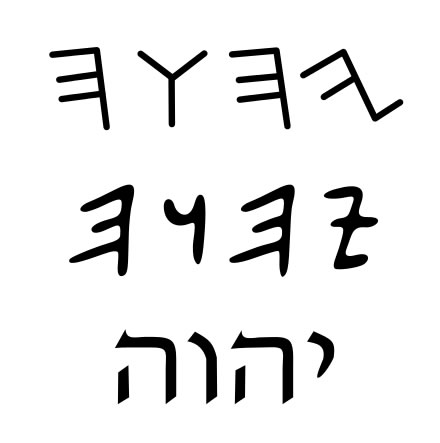 Before this, among the Hittites and their mythology, the triple thunderbolt is one symbol of Teshub. 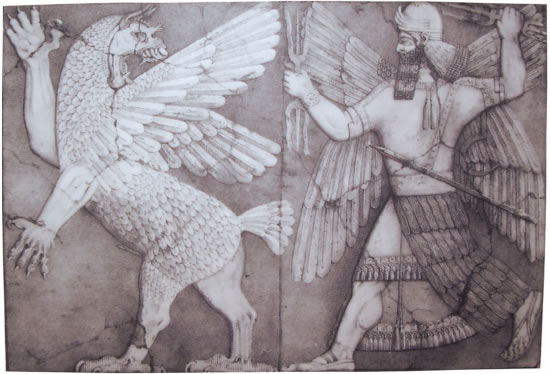 as a bolt of Ninurta,
the God of Scribes. 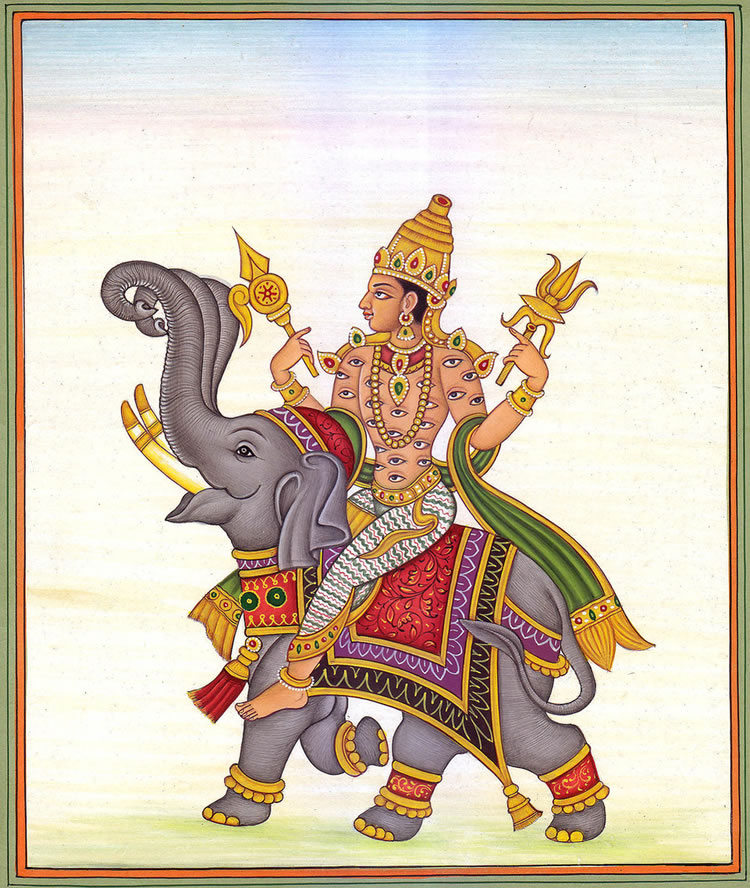 In ancient Vedic religion [1500 BCE,] as well as Hindu mythology, the thunderbolt was the power symbol of Indra:
the vajra.

Among the Greeks the thunderbolt has residence, in a weapon given to Zeus by the Cyclops. 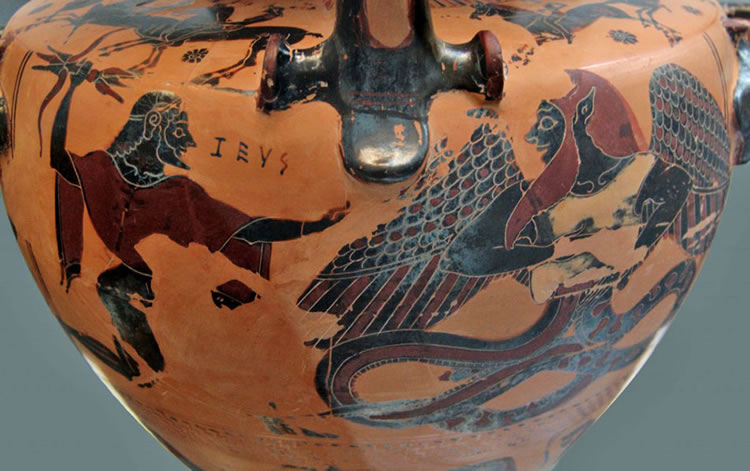 The Romans picked this as a Jupiter-referential 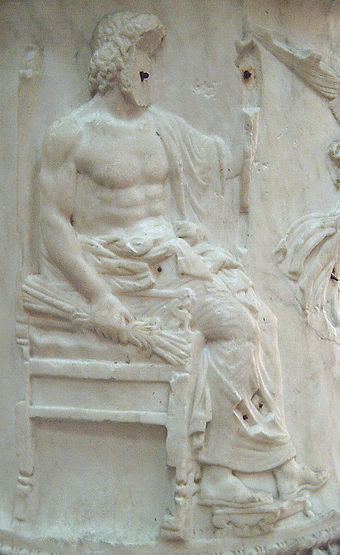 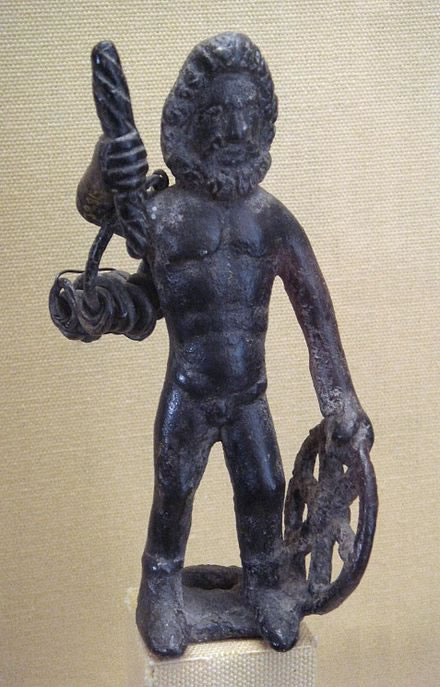 And the interpretation of Jupiter’s thunderous legacy among the Celts became Taranis, known locally as Tuireann. 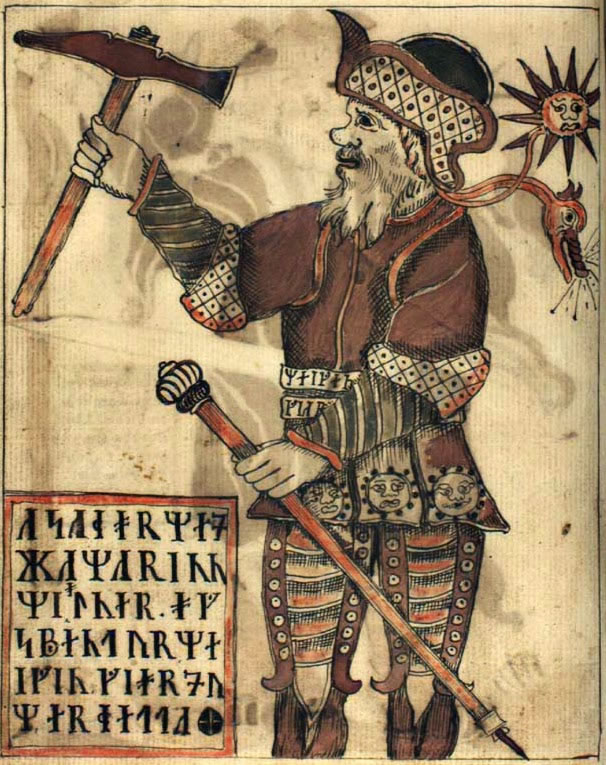 And more renderings of thunderbolt illuminators. From Wikipedia, references include:

In Maya mythology, Huracan is sometimes represented as three thunderbolts.

In Cherokee mythology, the Ani Hyuntikwalaski (“thunder beings”) cause lightning fire in a hollow sycamore tree.

In Ojibway mythology, thunder is created by the Thunderbirds (Nimkiig or Binesiiwag), which can be both benevolent and malevolent to human beings.

In Yoruba mythology, the thunderbolt is the weapon of Shango.

In Paleo-Balkan mythology, Zibelthiurdos (also “Zbelsurdos”, “Zibelthurdos”): a god recognized as similar to the Greek Zeus as a wielder of lightning and thunderbolts.

In Navajo mythology, the hero twins, Naʼídígishí and Naayééʼ Neizghání, have bows that shoot thunderbolts as arrows.

In Chinese mythology, Lei Gong uses thunderbolts as a weapon and his wife, Tian Mu, creates the accompanying lightning flashes with her mirror

But to my experience, the power of the thunderbolt, as a symbolic device, as many know about me, personally, is the Tibetan dorje or the vajra as a designed object of thunder-bolting, diamond-piercing lightning struck. In this sense, in Tibetan Buddhism, the “Vajra” or thunderbolt is symbol of Vajrayana branch of spirituality. 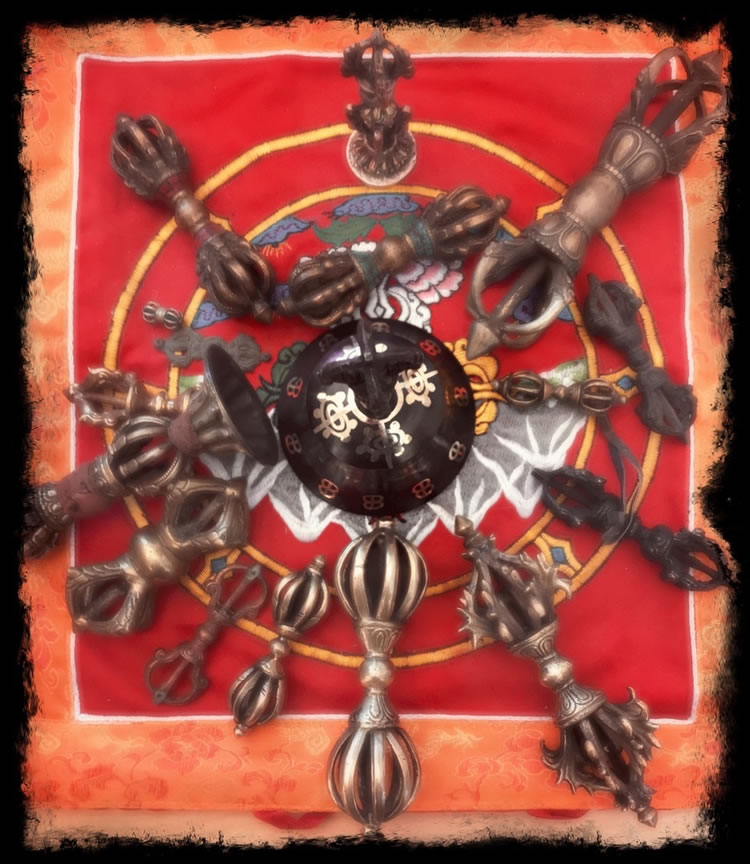 As many know, my studios and office are populated by dozens of these expressions, which, as you might notice, bear a resemblance to other symbols of lightning bolts shown above. Double-pronged and “clawed.” The symbol has been redrawn by me hundreds of times as a reflective contemplation.

The point to this exploration? As a student of brands and the marks that are aligned to them, the power of the markings that designers make, the study of meaning, context and visualizations are inherent in the work. And the idea of symbolism, whether textual or graphical is deep in the alignment of message, meaning and memory.

The deeper you go, the more you know. And I prefer that pathway,
walking down deep into the spelunking of the idea.

And the meaning that comes of it—to the craft, the memory and the work that makes it so unforgettable.

And that’s our work, right? 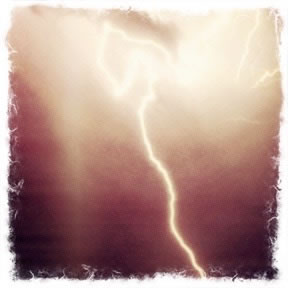 That’s where the magic is.

G I R V I N | BRANDS BASED ON GENIUS
BUILDING STRATEGY AROUND PEOPLE
goo.gl/unZAED

The Rainbow Garden of Herbs

A LEGACY AND LETTERFORM LANDMARK FOR RAINBOW MAGAZINE CALLIGRAPHY AS MAGIC When it comes up to it, the making of marks is an inherently magical proposition; that is: magic is definable as a insight and plane changer. It transforms perception and meaning in the momentum of recognition and inception. This lies in the presumption of…

BRAND CH'I: THE ENERGY OF BRANDS AND THE FORCE IN THE FLOW OF CH’I

THE STUDY OF THE PAST TO ROLL TO THE FUTURE: INVESTIGATING THE HERITAGE OF ART, ENERGY, MEANING, MEMORY AND CONTEXT IN THE WRITINGS OF HSIEH HO, 6TH CENTURY CHINESE ART CRITIC. It’s been said by one that “Energy is eternal delight.” William Blake As I keep working forward, I find myself, literally, in the going:…