THE LONG REACH | Story Flow and Dispersal — the Nature of Influence and Connection: Crowd Panic Strategies 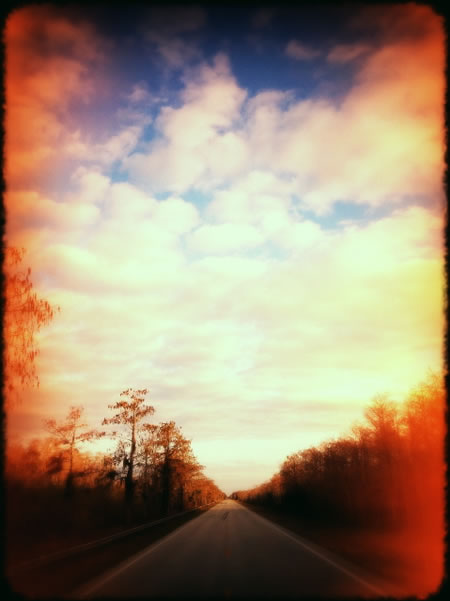 Crowds, panic, flow, clustering and the flow of information — Brands, stories, communities — observations at the roadside.

How does one story become another — shared?

Is it worth thinking about the concept of crowds, sharing, events, modeling — and that might be relevant to hybrid brand and design strategy?

Driving across the Everglades, a long and single transecting route — cross swamp — there was an accident. I saw one EMT aid car go by, then another — then spied others, approaching that long reach from one end of the road to another.

What I was curious about, during this trip, was the introspection of what might’ve happened down that road. With so much action, what could be occurring down there? Something catastrophic, I dreamed. I kept looking down the road. Watching for signs.

But what happened led to a series of contemplations about the nature of what we do — as brand strategists, designers, social networkers / rooter and routers and creators of ways that people understand content and communications.

There are clear roots in the nature of the metaphoric structure of the winding insinuations for how crowds work — and it’s interesting to know that there’s an entire study of crowd flow, panic and the management of peopled movement.

Here are the facts of the experience.
• There was a string of aid cars.
• There were aid cars coming from other directions, off in the distance.
• There were patrolman, standing at roadside, gesturing on their mobile transmitters.
• Finally, a distant line of cars appeared — cruising to a full stop out in the middle of nowhere, but the swampscape.
• People got out of their cars, and off in the gathering afternoon light, the sun scouring directly across the roadway, a great confederation of lights — the police alert strobes — flashing in disharmony in the distance. 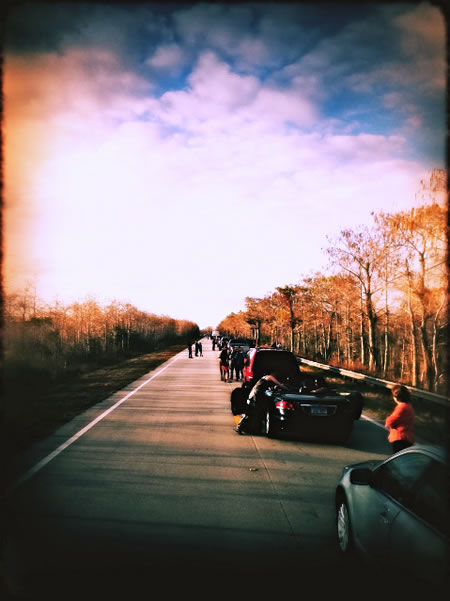 I got out too. But it wasn’t to look at what was the accident scene, far down the roadway, it was to look at the swamp. I waded into the brush, and began talking to others about where they were from. What’s the story? Standing at the edge of the swamp, I spied alligators, herons, crows and the dithering whirl of micro-life in the water.

The allegory of the water beetles and crowds: panic
Then I saw one thing that struck me, a grouping of water beetles milling in a torrent, clustering in the water. What was that, and why were they doing that? They were panicking, it seemed like — trying to get closer to each other. While I’ve seen plenty of bugs hovering in the air, or rising en masse from the forests or streams — hatching, I’ve never seen anything quite like that.

I wondered: and it lead me to a scientific organization that spends all of its time studying the modeling of this type of thing. All of these areas of research fit right in — together.

Things like:
PROPELLED PARTICLES: We investigate models of collective motion since 1995, when the self-propelled particles (SPP) model was proposed by Prof. Vicsek et al. to describe the onset of ordered motion within a group of self-propelled particles in the presence of perturbations. Due to its simplicity and analogy with biological systems consisting of many, locally interacting particles, the SPP model soon became a reference model for the description of flocking behavior

BIOOPTICS (which these bugs have) Refraction-distorted binocular visual field of animals living at the air-water interface.

FLOCKING Track logs of homing pigeons flying in flocks within a natural setting have been obtained by high-resolution lightweight GPS devices and analysed using a variety of correlation functions inspired by approaches common in statistical physics. We find a well-defined hierarchy among flock members from data concerning leading roles in pairwise interactions, defined on the basis of characteristic delay times between birds’ directional choices. 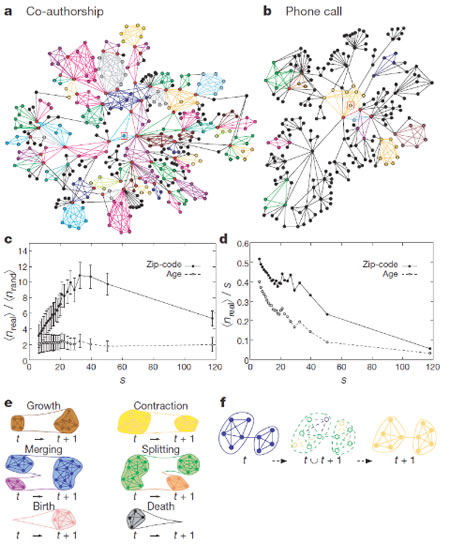 CLUSTERS & COMMUNITIES A cluster (also called a community or module) in a network is a group of nodes more densely connected to each other than to nodes outside the group. In most real networks in nature and societies clusters often overlap. CFinder offers a fast and efficient method for identifying the overlapping clusters of data represented by large graphs, such as genetic or social networks and microarray data. CFinder can be downloaded from http://CFinder.org as a free software for analyzing and visualizing overlapping dense groups of nodes in networks.

COLLECTIVE BEHAVIOR We develope an experimental setup of simple self-propelled robots (boats) that show collective behavior based on only collisions in a two dimensional toroidal space. In our experiments the role of leaders can be studied in a system with a presence of noise.

THE MEXICAN WAVE The Mexican wave, or La Ola, which rose to fame during the 1986 World Cup in Mexico, surges through the rows of spectators in a stadium as those in one section leap to their feet with their arms up, and then sit down again as the next section rises to repeat the motion. Modelling the reaction of the crowd to attempts to trigger the wave reveals how this phenomenon is stimulated, and may prove useful in controlling events that involve groups of excited people. 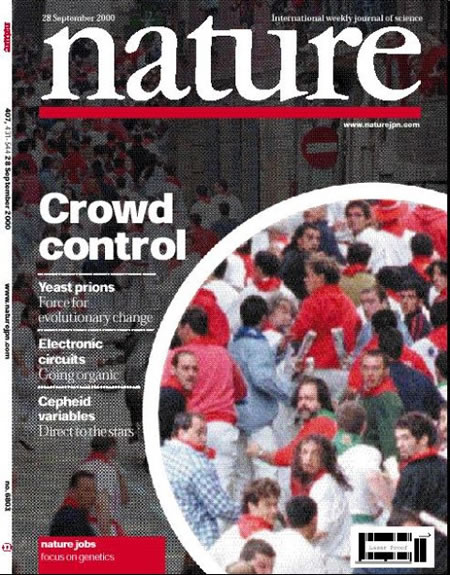 PANIC One of the most disastrous forms of collective human behaviour is the kind of crowd stampede induced by panic, often leading to fatalities as people are crushed or trampled. Here we use a model of pedestrian behaviour to investigate the mechanisms of (and preconditions for) panic and jamming by uncoordinated motion in crowds.

What kind of place is this? Eötvös Loránd Tudományegyetem • Természettudományi Kar • Fizikai Intézet — in Budapest.

But my curiosity really started with the idea of crowds, and information sharing, especially in excitable circumstances, and meditating on the bugs in the water, reminded me metaphorically of what I was starting to see in the emerging crowds, pods and clusters down the long run to the accident scene. The bugs, since I know you’re curious, are called Whirligig Beetles (Macrogyrus oblongus) These aquatic beetles swim in groups on the surface of water, often with a rapid circular motion. Each eye is divided into two separate parts — one for viewing above water, the other for scanning underwater.

That allegory — one eye above, the other below — is a curious addition to the notion of the classical Sufi story about the blind men feeling out the elephant, to each grasping, they are forming their own impressions. But more so, it relates to the concept of how people tell their stories in the context of their personal experience. 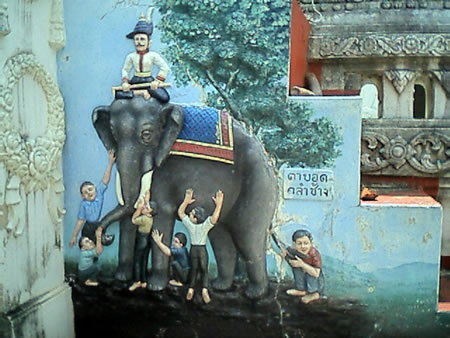 The revelation, during the course of the accident scene was a mixture of panic and reactive revelation:
— “we’re never getting out of here.”
— “it will be at least three hours.”
— “there’s no other way across.”
— “there is another way across.”
— “it was a three car accident.”
— “it was one person — thrown from his vehicle.”
— “we’re waiting for the state patrol to do their investigation.”
— “the state patrol is already here.”
— “I’m leaving.” “I’m staying.”
— “this ruins everything!”
— “time to sit, listen, read a book and relax.”
— “I’m going fishing, right here.”

But what I found in the sequencing of the clustering — including myself — was a willingness to engage and potentially swirl the energy around the event, getting to our destinations, and turning around and heading back to where we’d come from — and activating collective excitabiltiy. The feelings percolated from resignation to panic to certainty to a kind of collective “cloud of unknowing.”

That idea of the cloud of knowing — being in, connected and in control, or out of the right circle (in terms of knowledge and being out of control) is the nature of the query — and how it relates to the profound nature of influence, connection, leadership and brand.

Walking up to near the crash site, and then moving back along the road, I found the variations on information to be fascinating — just like the bugs, swirling.

What I suggest is that there is a distinct clustering and patterning that organically influences the infection of information — and that brand people should be pondering these migrations in building their stories, strategies and positioning in a manner to understand the clustering of human storytelling movement — panicked, angry or otherwise.

If you start a story, how will it be passed along. Let alone storytelling and the proposition might be as simple as the psychology of campaign, design strategy, emotional alignment and expression and how that language reaches the relationship. Speak, and be heard — if you are speaking their language: conceptually, textually, visually.

Any profound connection will be about the degree of enchantment that rings in the nature of the mind of the listener, and the memory for (and from) which they have lived.

T I M | GIRVIN OFFICE | NYC
–––––
BRANDS THAT ARE HUMAN | THE DYNAMIC OF CLOUDS, CLUSTERS AND SHARING

Design, community, embracement, love -- how does the crowd gather round? And when they do, what is the story that they tell? It is about truth, telling, holding, relationship. Talking today, about the early days (several years back) reviewing the transitioning of Yves Saint Laurent, the bridging was between the current positioning, with the lead…

Girvin | Delano, Miami Beach, Fl. A meditation on the concepts of speed and pace -- in the relationship with anyone, anywhere, anyplace. Do you find yourself hurrying past the conversation that you're having? Are you looking ahead, in passage against where you are now? Are things simply not fast enough? I wonder about that:…
We use cookies on our website to give you the best experience on our website. By clicking “Accept”, you consent to the use of ALL the cookies.
Do not sell my personal information.
Cookie SettingsAccept
Manage consent