THE LUSTRATION OF FASHION: ANTONIO LOPEZ AND RUBEN TOLEDO 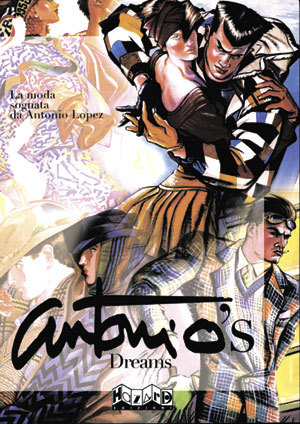 THE SPIRIT OF FASHION ILLUSTRATION TAKEN TO ANOTHER EDGE. FINDING PERSONAL ALIGNMENTS, THE HISTORY OF THE PRACTICE. 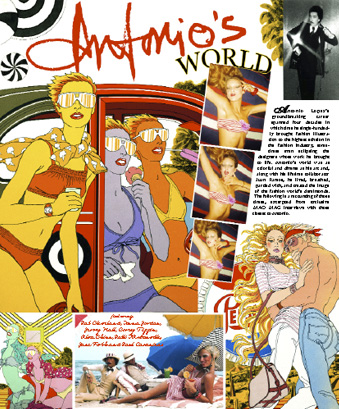 MY PERSONAL HISTORY in the realm of the work of fashion comes from a string of opening experiences that brought me seeing things in a different way — but it was invariably passion that ignited my imagination. 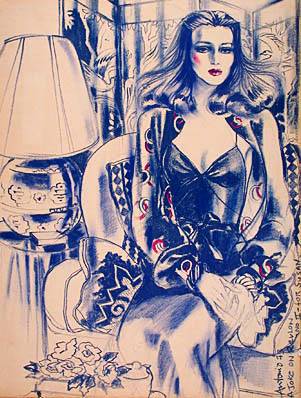 Working, in the beginning — the 70s, the idea of linking into Nordstrom (and their clan) was a kind of “invitation-only” affair. While the Bon Marché, Bullocks Wilshire, Dayton, Wanamaker, Jordan Marsh, Macy’s, Target, others were seemingly open to a straggling designer / artist / “retail” theorist from Seattle, linking into the home town game was one of proof. “Prove yourself, your experience and maybe we can talk.” I worked on building that story — what’s the circle of the idea, how can it be brought closer? 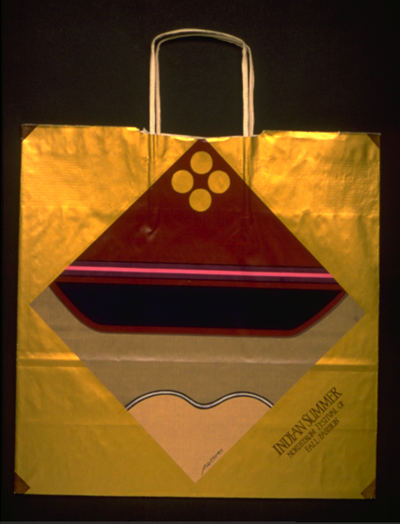 I circulated the perimeters, striking out to connect with big retailers, specialty department stores exploring the stories of packaging, identity treatments, shop in shops, signing, mini and major campaigns. It was my “theory” that campaign themes could be integrated — you could have a thematic intention that would be stylistically expressed in all media — everywhere. I was looking for like minds. That’s what I believed and I was looking for: listeners — this, the 70s. As I began to branch out that branded storytelling in retail experience design — linking with the advertising department, retail interior design, store planning and construction, I made friends with the leadership in each apartment, and started threading the connections together. A tapestry of relationships emerged. And it happened – one campaign: name, logo, theme, message, color, packaging, signing, windows, interiors: integration (the 80s), another and another.

That sequencing lead to working with John Jay (Currently CD at W+K, Portland, OR) and Bloomingdale’s. John was relatively new there – perhaps a couple of years – he’d come from Geo (magazine), as I recall, where he was the art / design director. The situation of our introduction was the work at Nordstrom — that caught his eye, I flew out, we linked up, and the opening was the Bloomingdale’s Ireland campaign. 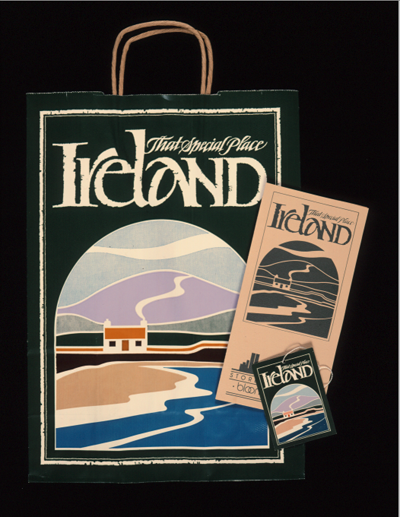 My first campaign for Bloomingdale’s: Ireland

From there, it continued, nearly week after week, for a spate of 8 years of collaborations. John is a person of fantastic curiosity, and is profoundly without any sense of limitation in exploring and executing ideas — it’s no wonder he went from his spectacular efforts — tirelessly working, at all hours (along with his wife, colorist and cosmetic strategist, Janet Jay — whom I met at Diane Von Fürstenberg’s offices, when I was working there).

It was during that time that I’d met another extraordinary person, the “other” artist (among many) that was working with John consistently. Antonio Lopez. While I was working mostly on type design, with some illustration, packaging and identity work, as well as the campaign thematic design along with John’s team, Antonio was working on creating an extraordinary, staggering array of fashion illustrations. I worked with him on a sequence, creating titling designs and formats for print and instore installations and signing.

A grouping of Antonio Lopez treatments: 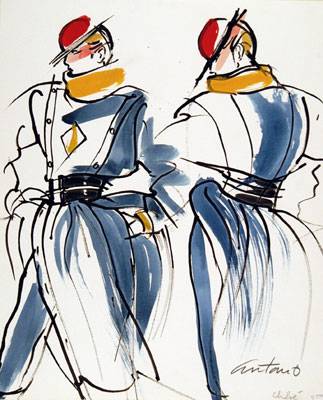 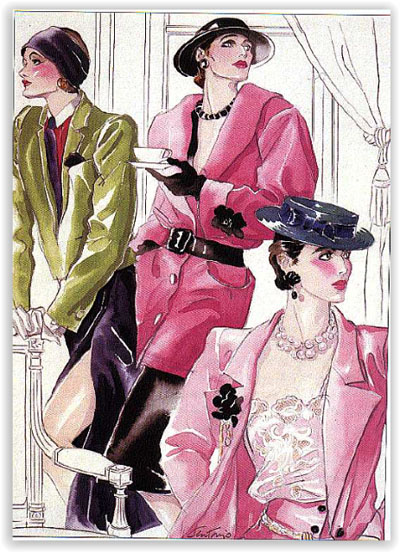 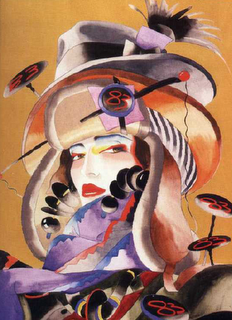 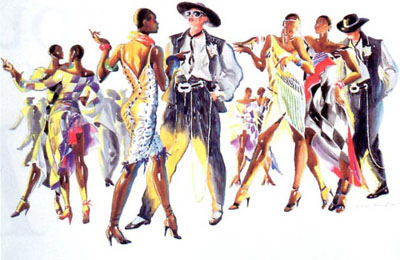 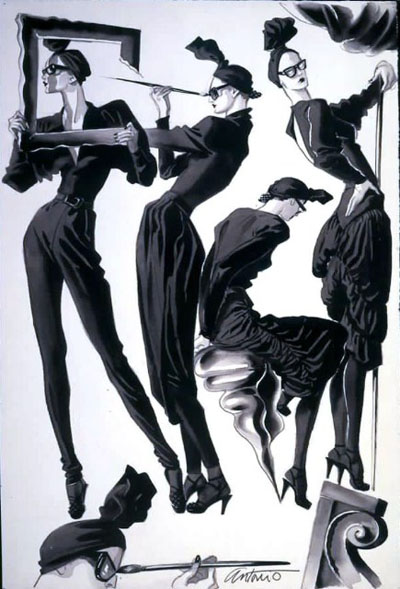 His story is remarkable — drawing dresses with his mother as a child, coming to the FIT in NYC, leaving to become a key stylist / illustrator for WWD; then onwards to Paris, linking with such luminaries as Karl Lagerfeld, among of constellation of others.

I went to meet with him, to learn about who he was — there, in his studio in NYC, a marvelous, well-lit loft environment, festooned with drawings and objects, photographs and projects in play; and plenty of interesting people around (always). Sweet, kind, complimentary, generous, he was spectacularly warm and gracious. Sadly, Antonio passed.  He was 44. Antonio was known all over the world in fashion circles, living and practicing his art in Paris and NYC, and if you look at his imaginative renderings in the gallery below, you can imagine why.

Rather than merely draw, he comprehensively styled his conceptions, building a world around the fashion that he illustrated.

He would style, shoot, even find the models for his drawings, which were lushly illustrated renderings of his observations — art, framed, or art, in the magazine. Seeing them, I was moved by his craft and draughtsmanship.

If I’m not mistaken, a piece by Karl Lagerfeld is coming out shortly that documents (and channels) some of these associations — in the newly styled spreads at V. 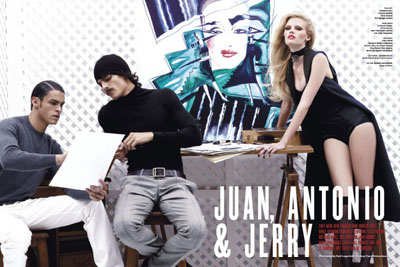 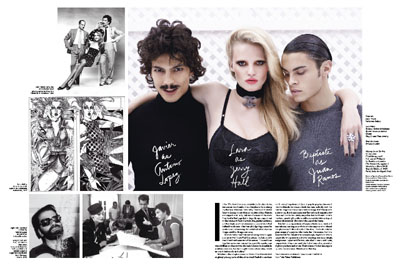 His work has a washy, calligraphic character — some derived from his work as a splash-dash, quick-gesture, articulating illustrator for WWD, creating new visualizations every day – and other renderings are more practiced and detailed, pencil drawn — still, too, churned out in a blazing fury of designed, expansively creative style. 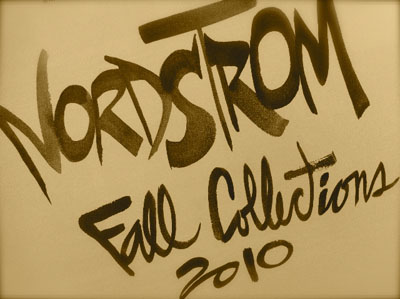 The complement to this memory came a couple of years ago, working at Nordstrom, working on strategy, signing systems for identity, retail work and naming development. And in speaking with the Creative Director there, about more work, he’d referenced that everything was being done, everything being illustrated by Ruben Toledo. I was kind of shocked. I’d thought that he was involved, doing illustrations and campaign gestures, here and there — but I didn’t realize that he was doing everything. 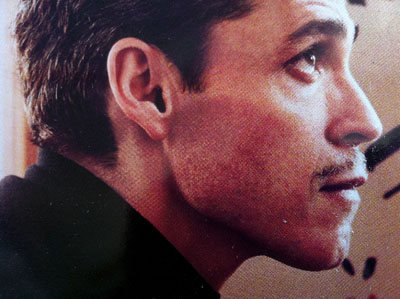 The striking alignment for me comes in two gestures. One, the man. And the other, his place of work (along with his wife clothing designer Isabel Toledo). In a manner, the styled environment in which he lives. That idea of creative place — the environment in which one works — in relationship to the work is just as important as the character of the creative itself. That too, the impression for Antonio Lopez — his loft, NYC. 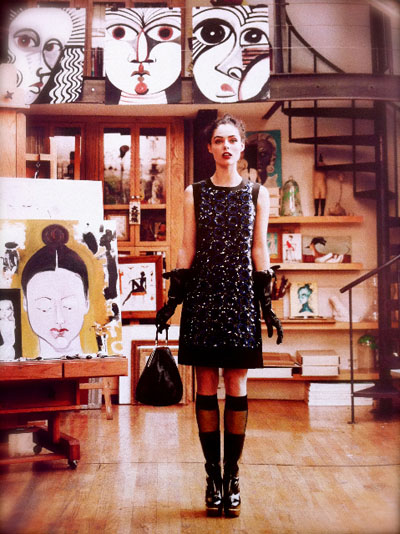 Seeing this current fall catalogue for Nordstrom reminded me of the earlier days with Antonio and John — here, Ruben has extended it somewhat further, acting as a kind of artistic fashion draughtsman and photographic stylist. Interestingly, Antonio was a kind of arbiter of fashion — styling women to appear in his drawings, and with his creative “crowd management” he was creating significant movements in the very heart of fashion design. 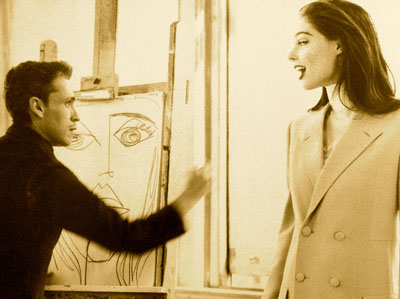 Ruben might be doing that too — but he’s got Isabel I’m sure, looking over his shoulder, as a co-creator, designer / director. Surely both of their stories, coming to the states with their families, escaping Cuba in the 60s, they went to the same high school in New Jersey. Ruben was discovered by Warhol and Haring doing windows for the now vanished Fiorucci. 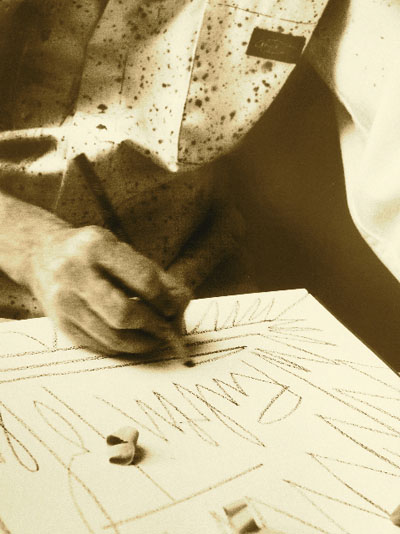 That legacy of style — that time, it’s an intermixture — it takes me back and brings me forward; on the one hand, I recall the days and connections with the wild creative that was Bloomingdale’s, NYC fashion: design, illustration, retail – and the entire clubby fashion and party scene, back then; and then there’s now, some new sobriety surely in play, but it’s scented similarly, to my reckoning. 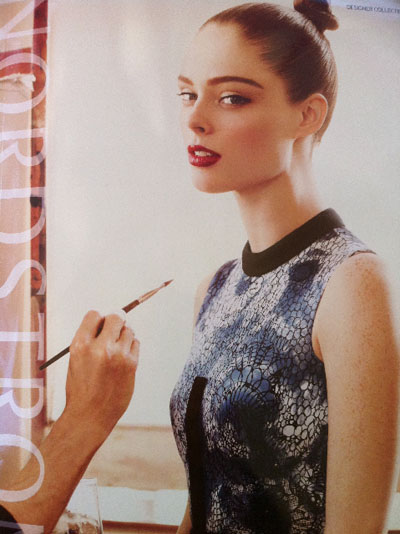 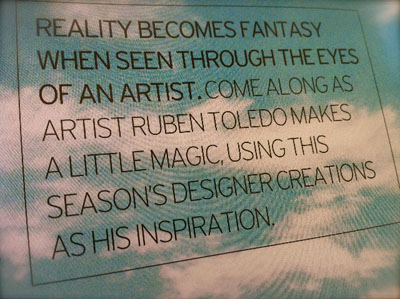 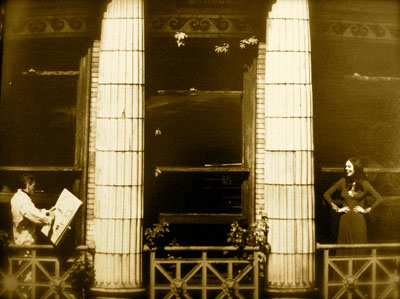 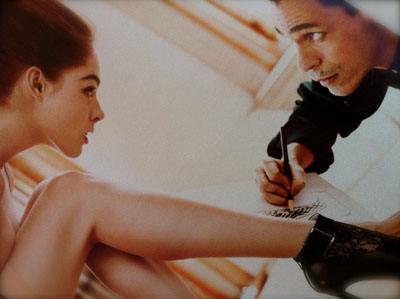 Details of the imagery of the catalog, Ruben Toledo, artist, stylist, director

While these are two different men, the embraced creativity — and the love of fashion — crosses over, one to the other, in spirit. I do well recall the days (the 80s) — that slipping creative spread, from NYC to London, across the channel to Paris, and it was a dizzying, if not turbulently evocative time. Designers then, especially from the European scene, crossed easily from one from of design to another — the idea of that loose gesture of ideation could flood from the channels of identity, to clothing, to furniture and equipment, retail design and interiors and shopfronts. That foundation, that inspiration, was the beginnings of my career — that fertilization, international cultivation planted the seeds for everything. Seeing Toledo’s work, and recalling the days with Antonio — then and now, it all comes back. And to this day, I’m still working on that spread of capacity, working the bigger story. I’m still inspired.

Exploring the heart of human experience.
And telling the stories of their revelation: | https://www.girvin.com/blog/category/storytelling/

Fashion, Logos, Branding: Too Much Stuff?

YSL, American Eagle, New Era Customization and the Interpretations of the Crowd. What about brands that are your brand? Make your own world: Working at Yves Saint Laurent, I can recall a conversation about either oui or non -- the idea of more big YSL logo merchandise? It was a go, in the end. FASHION…

Drawn from the heart: simple design prototypes from the 30s: design strategy and clarity of intention The heart of creative: drawing, sketching, roughs, comprehensives made by hand, brush and simplistic inspiration. A friend of mine in Santa Monica, composer Stuart Balcomb, is a ever-roving explorer of all things creative, offered the rendition of two stories…
We use cookies on our website to give you the best experience on our website. By clicking “Accept”, you consent to the use of ALL the cookies.
Do not sell my personal information.
Cookie SettingsAccept
Manage consent