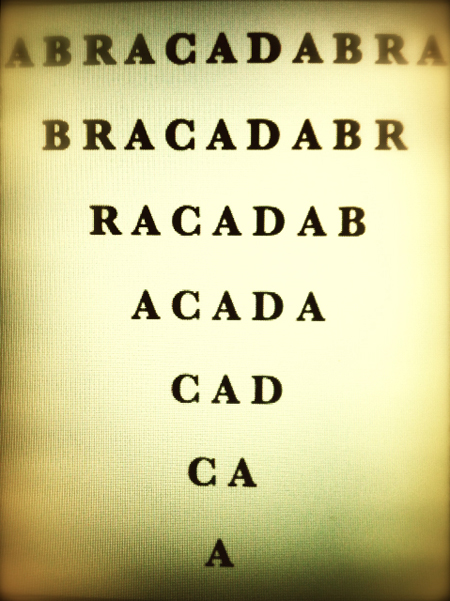 The journey of designers invariably involves the alphabet — and most of the rest of us — yet oftentimes we forget the majesty and depth of that system of ancient marks. And most don’t comprehend that the alphabet, while perhaps mostly seen as a series of antiquated scratchings that have been reconfigured in 5000 years or more of evolution, also involve magic, archetypal symbolisms and transformational power.

An emotion becomes an interpretative thought becomes a set of muscular movements that spell words, sentences, clauses and stories —

I got a note from some friends at the Oxford English Dictionary. It was about this word, “abracadabra” — and perhaps you’ve got the same one, since you might have friends there too.

Earlier in my life, studying the history of the word, and the graphical array of their expression, the real key is linking historical references, the actual “use” of the word to form connections — for one collective approach to studying language. But you can dig far deeper, looking into the etymological references of words that might range back thousands of years to earlier times —

of ancient worlds. I go both places. I go everywhere for words.

And, as a calligrapher, I draw them: 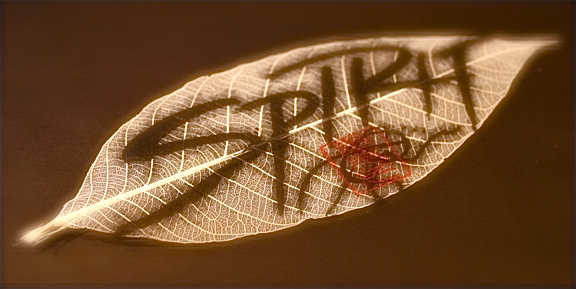 But this is about words that are magic, and the idea of magic, and the alphabet is a kind of weaving and mysterious interlacement of characters that are marked, and meaning that is embedded far deeper than the letters themselves; it’s the breathing of them, the marking of them, that says something to the other forces in the world. Breathing, or whispering words will issue magic, if rightly told; and it was surely the ancient belief that the alphabet was a kind of multidimensional loom — the warp, weft and woof of which layering between the transcribed, the scribed and pronounced and the knowledge that these interceptions actually created power.

Surely I believe in that. An odd site references that abracadabra is “a word of Kabbalistic significance that was, and still may be, used for incantations. It was declared that when written as below, folded so as to conceal the writing, sewn with white thread and worn around the neck, your ailments would subside. Sometimes you were required to remove letters and this would further cause the illness to diminish.” Frankly, to dive deep, you can walk further into the overview provided there. But the notion is hardly unique. In Arabic, Hebrew, Sanskrit, Chinese and Japanese, there are dozens of mystical scripts and amalgams of marking alphabets or ideograms that are moved to talismanic purport.

Another references, that the phrase is Roman in origin — with a slightly different spin: “from ancient Rome- the phrase abracadabra! It’s likely a version of the Aramaic words abra (to create) and cadabra (“as I say”)— or “create as I say.” According to the 2nd century AD physician Serenus Sammonicus, who was Emperor Caracalla’s personal doctor, it was an incantation used to weaken the hold that disease or illness would have over a person. If abracadabra was written as shown above and worn in a container around the neck, it would cure malaria.”

And our friend Douglas Harper, etymological wizard, offers, “magical formula, 1690s, from the Latin (Q. Severus Sammonicus, 2th century), from Late Greek — Abraxas, a cabalistic or gnostic name for the supreme god, and thus a word of power. It was written out in a triangle shape and worn around the neck to ward off sickness, etc. Another magical word, from a mid-15c. writing, was ananizapta.

My earlier recollection, that which I hold to, comes from Egyptologist, Orientalist and Philologist, E. A. Wallis Budge, in a reference work on talismans and amulets, that the word meant, from the Hebrew — abreq ad habra — “hurl your thunderbolt even unto death.”

Walking back, exploring the word, I study the OED references, which are gathered below — and it’s not only about the phrasing in the west, in any study of a work, and the word that holds it, but rather the nature of the roots that might carry it farther back in time. Earlier in my life, I’d created talismans and worded knots as traveler’s amulets to protect friends and family journeying to dangerous places — and, even to this day, I believe in that power — the entanglement of meaning in context — what lies within the stroking of the letter, the magic and meaning within — and, if meditated on, what learnings might unfold.

What lies beneath — and what lies in the swirl of knowledge, a whorl of characters that spins in a contemplative spiral into the center of the universe?

Below, an alphabet mandala, drawn for an exhibit that I’d had, the Library, San Francisco Rare Book Collections: 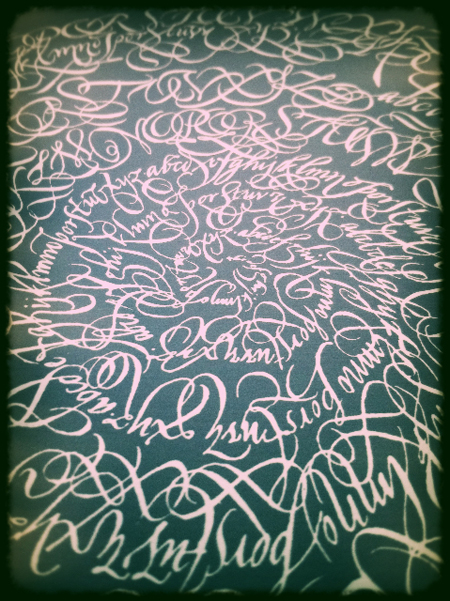 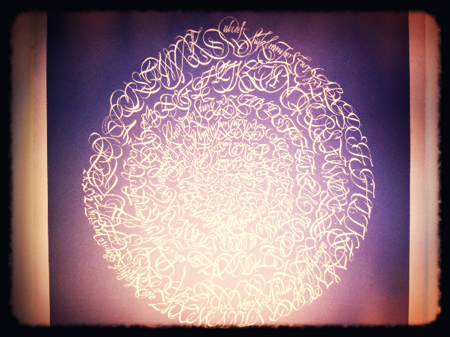 And back to Oxford — what is the journey of the word?

The etymology of post-classical Latin abracadabra has been the subject of much conjecture; no documentation has been found to support any of the various conjectures which have been put forward. Some have suggested an origin within Latin or Greek, e.g. as an alteration of abecedarius abecedary adj. with insertion of euphonic elements (e.g. -ra-), others a borrowing from languages as diverse as Thracian (a sparsely attested Indo-European language) and Sumerian. A connection with post-classical Latin abraxas, Hellenistic Greek Ἀβράξας abraxas n. has also frequently been suggested, but the nature of any relationship is unclear. A further large group of etymological suggestions tries to derive the word from Hebrew or Aramaic in various ways, involving, for example, an alteration of an unknown Aramaic name of a demon, or a connection with Hebrew bĕrāḵāh ‘blessing’ and dāḇar ‘to speak’ or dāḇār ‘speech, word’, but again, supporting evidence is lacking, and the use of the magical word in Jewish sources does not seem to be attested before the early Middle Ages.

a. An instance or utterance of the magical word ‘abracadabra’, supposed to act as a charm against illness, evil, etc., or (in later use esp.) to assist in the performance of magic; a spell, incantation, amulet, etc., which incorporates or makes use of this word; (more generally) any magical spell or incantation. Also fig.
When used as a charm, the word was typically written out in a triangular arrangement, with ‘ABRACADABRA’ on the first line, ‘ABRACADABR’ on the second, and so on. The paper so inscribed was then kept in an amulet, etc., worn around the neck.
1565 J. Calfhill Aunswere Treat. Crosse f. 133v, May we not suspect yt there is?some piece of secret operation?in the word Abracadabra, to heale one of the feuer.
1582 R. Madox in E. G. R. Taylor Troublesome Voyage Capt. E. Fenton (1959) 171 Banester sayth yt he healed 200 in one yer of an ague by hanging abracadabra about their necks.
1668 tr. P. Calderón de la Barca Feign’d Astrologer ii. 26 Here are words as able to fright away an Ague, As Voiture’s Abracadabra.
1691 J. Dunton Voy. round World II. ix. 103 If there’s any thing in the Stories of Inchantation, thy Verses have as much vertue in ‘em as any Abracadabra in the World.
1786 J. H. Tooke Epea Pteroenta Advt. 104 The grimgribber of Westminster-Hall is a more fertile?source of imposture than the abracadabra of magicians.
1791 G. F. A. Wendeborn View Eng. II. ii. 486, I found him in deep meditation, endeavouring to decypher a kind of Abracadabra, written on a small piece of paper.
1816 Scott Antiquary II. viii. 226 Where be your periapts, and your abracadabras, man?
1825 S. T. Coleridge Aids Refl. 165 Leave him?to retaliate the nonsense of Blasphemy with the Abracadabra of Presumption.
1867 Catholic World July 534/1 There is scarcely a slave, or a tree on the estate that has not a triangular Abracadabra, or some other amulet suspended on him or it.
1882 H. D. Traill Recaptured Rhymes 32 The marvels of magical spell Medieval find credit once more, And ‘peasant-proprietor’ conjures as well As an ‘Abracadabra’ of yore.
1917 Amer. Jrnl. Theol. 23 187 Formulas which are?as meaningless as the abracadabras of a conjuror in a booth.
1983 Daily Tel. 4 Apr. 7/2 That Hebrew cabbalistic spell the Abracadabra had to be pronounced nine times before it could be effective.
1996 Sunday Independent(S. Afr.) 15 Sept. (Sunday Dispatches) 18/2 The trick?that caused most wonder?was one he called ‘Water from India’.? He would chant a few abracadabras and empty the vase of its water contents.
b. Obscure, nonsensical, or mystificatory language; mumbo-jumbo, nonsense, gibberish.
1867 Biblical Repertory Apr. 252 Swedenborg’s writings, as a whole, are unintelligible—abracadabra—to any other.
1934 D. Thomas Let. c21 Mar. (1987) 103 Piece One is remarkable for the number of entirely meaningless & affected words you have managed to drag in.? All the damned abracadabra of the Poet’s Corner, and as gutless as a filleted herring.
1952 H. Wouk Caine Mutiny ii. x. 101 He was certain that if he sailed a hundred years on the Caine he would understand such abracadabra no better than he did at that moment.
2002 N.Y. Times Bk. Rev. 3 Nov. 14/2 In the two novels that followed?Eco gave the impression of seeing just how much deconstructive abracadabra he could get away with flinging in his new public’s face.
2. Something supposedly endowed with special power or efficacy; magic; (also) rigmarole, hocus-pocus.
1821 J. Bentham Elements Art of Packing 124 The same two respectable gentlemen?constitute, in the County of Middlesex, but one sheriff, and thereby, in legal abracadabra, like man and wife, but one person.
1899 N. Amer. Rev. Apr. 462 The sect who call themselves?Christian Scientists, and who practice the latest abracadabra to conjure away the effects of fixed causes—asserting that pain is the result of sin and can be abolished by faith.
1948 F. Frankfurter in U.S. Rep. (U.S. Supreme Court) 333 765 Charging a jury is not a matter of abracadabra. No part of the conduct of a criminal trial lays a heavier task upon the presiding judge.
1990 Nation(N.Y.) 19 Nov. 604/2 It was a marvelous bit of abracadabra; the creation of ‘profits’ by giving money away, after which these ‘profits’ launched another wave of borrowing and lending.

Used by conjurors and magicians as an exclamation imparting supposed magical power, as when performing a trick. Hence more generally: used as an exclamation accompanying any seemingly remarkable feat or occurrence.
1819 W. T. Moncrieff Rochester ii. iii. 43 Well then, if you won’t tell our fortunes for us, suppose we tell you yours?. Hey presto pass! Abracadabra!—By the lines of your face, I can perceive [etc.].
1859 Amer. Jrnl. Educ. Dec. 539 If the time be well chosen, one may then put two fingers up, three down—abracadabra! and behold a bag full of gold.
1917 R. Graves Fairies & Fusiliers 58 What need have I of magic charms—‘Abracadabra!’ and ‘Prestopuff’?
1976 A. MacLean Golden Gate ix. 200 The lights will be switched off when I want them. ‘Abracadabra!’
1990 Scuba Times Mar.–Apr. 29/1, I did, and ‘abracadabra’, no more backscatter.
2001 K. Sampson Outlaws (2002) 77 Abracadabra! The door’s open. We’re in.

Sometimes the best path Is the slow and watchful. Recently, I’ve been asked to design some signs — which, on a remote road, ask kindly: “Please Go Slower." Sometimes in the planning of strategy, for your life, brands and other enterprises — striking out the mapping of the path — moving forward: slow down and…

David Bowie | The Passion of the Blood

David Bowie | Passionate Blood: the emergent hunger of the darker side and the Quest for Light. Exploring the quest of Light and the Dark -- the preternatural (brand). I’ve made some observations in the past, about the patterning of passage: people die; and human brands, stylistic intention and the dark side of all of…