The mystery of the book: my encounter with Jorge Luis Borges 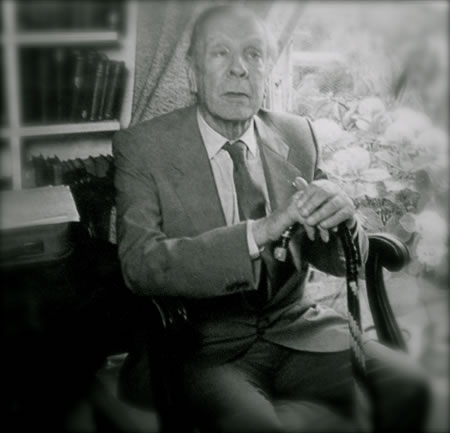 The mystical character of a man, a letter and an inspiration

For a long time, I’ve been exploring the realm of the mysterious. Perhaps my whole life. But mystery is something that speaks to the character of that which is merely unseen. It is what is hidden. Being a creative, the idea of hidden is merely a place for exploration — it’s the layer that is beneath the surface.

Mystery is spiritual. And mystery is revelatory. It’s about finding what lies beneath. And I’m always looking for what lies beneath — as a string of explorations. That relates to the notion of design; it relates to the expression of the brand — for in everything, the brand is human, and there’s a story — the humanity of these connections is powerful.

But it’s more so about the fact that in seeking any brand relationship, there’s always more that meets the superficial glance; there are intentions that lie in the heart of the maker. And the reasoning for that maker, the creator of the brand, has a sense of deeper, even archetypal levels of experience in psychic realism. People create these enterprises out of a sense of fulfilling — ultimately — a quest for meaning. People seek that out, creating something, creating meaning for themselves and others.

That sense of what lies beneath the surface is the experience of the deepening of layers of consciousness. That there’s something more there. And we’re all looking for that. More-ness. For some, that sentiment of richness is purely financial; and while there’s fundamental sustenance in making and spending money, there are surely more to levels of living than that. People seek that out. Find that.

In my own search for the meaning in the work that I — and my teams at Girvin — do is reaching deeper into the levels of experience. That is about touch — holism. And it is about storytelling — the ancient tradition of passing, and sharing, ideas — ideas that are the basis of creating the premise, the promise, of creativity and imagination.

Looking back, as I do, I’ll reach to two places.

Legacy in language: mystery in the later derviation, circa 1315, in a spiritual sense, “religious truth via divine revelation, mystical presence of God,” from Anglo-French. *misterie (Old French mistere), and before that, from the Latin mysterium, from the Greek mysterion (usually in pl. mysteria) “secret rite or doctrine,” from mystes “one who has been initiated,” from myein “to close, shut,” perhaps referring to the lips (in secrecy) or to the eyes (only initiates were allowed to see the sacred rites). The Greekk. word was used as an expression “secret counsel of God,” translated in Vulgate as sacramentum. There are non-theological uses — in English, “a hidden or secret thing,” which is from roughly the year 1300. In reference to the ancient rites of Greece, Egypt, etc. it is attested from 1643. The latest interpretation, as a detective story, was first recorded in English in 1908.

And in the other, the story is Jorge Luis Borges. 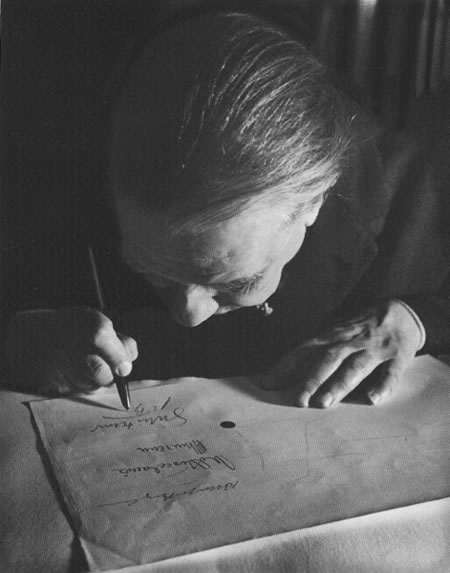 During my teenage years, I was exposed for the first time to “Labyrinth” — as an opening book, in the journey of exploration. I was sick — I had a fever — and as a result, reading the labyrinthine meander of the concatenations of his scholarly exposures, the depth of his mind was a venture into another world. A review, during that time, 1979, reveals: “Borges has come from Spanish into English in a rather haphazard fashion. His work first appeared piecemeal in the Fifties, a poem here, a story there, until, in 1961, he shared the International Publishers Prize with Samuel Beckett, a recognition that propelled two volumes of his work into English, translated by various hands—first, Ficciones, his most important volume of stories, and then Labyrinths, a selection of poems, essays, and stories. Even so, his writings had no chronology and, as so often happens in Borges’s case, disparate critics would grab possibly a single story of his and run with it to unlikely latitudes. The recurring ironies and the tangible paradoxes in his work led him to be invoked, often along with Nabokov, in a variety of misleading ways. He became distortingly fashionable and, as in Spanish, there sprang up around him a thicket of criticism far exceeding the small compass of his own writing. His books continued to come out haphazardly in translation, and Borges himself appeared on the scene, a frail, blind, and somehow heroic figure, speaking his courteous English and lending himself to interviews on all sides with an acquiescent modesty that both charmed and teased interviewers and readers.” Alastair Reid

I won’t go into the complex particulars of his legacy, and the fascinating history of his ascension in the literary world, but for me — it was the combination of his scholarship, along with the marvelous wanderings of his imagination, that most compelled me. 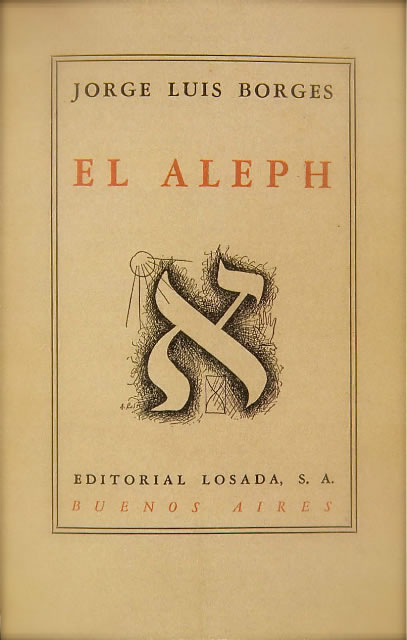 As a budding designer, in the exploration of the wonders of the alphabet, it was The Aleph, that opened my captivation. Here, the conception was that a single hidden letter, the Hebrew letter at the beginning of that alphabet, seen in a remote place — symbolically, a stairwell — was the portal to the entire universe — a mystical portal that leads to everything, and nothing, all at the same time. But for Borges, a telling merely based on the letter and the surrounding mystery wouldn’t be enough, as you might’ve noted in the overview above — there are layers of experience that are profoundly human.

Another telling that was similarly linked to the nature of the alphabet, the book, was The Library of Babel. Here — synopsized — the telling was constructed around the concept of a metaphorical universe consisting of an endless expanse of interlocking hexagonal rooms, each of which contains the bare necessities for human survival — and four walls of bookshelves. The order and content of the books is random and apparently completely meaningless, and still, the inhabitants believe that the books contain every possible ordering of just a few basic characters (letters, spaces and punctuation marks). Though the majority of the books in this universe are pure, unintelligible nonsense, the library also must contain, somewhere, every coherent book ever written, or that might ever be written, and every possible permutation or slightly erroneous version of every one of those books. The narrator of the story notes that the library must contain all useful information, including predictions of the future, biographies of every person, and translations of every book in all languages of the earth. Possibly for many of the texts some newly created language could be devised that would make it readable with any of a vast number of different contents. 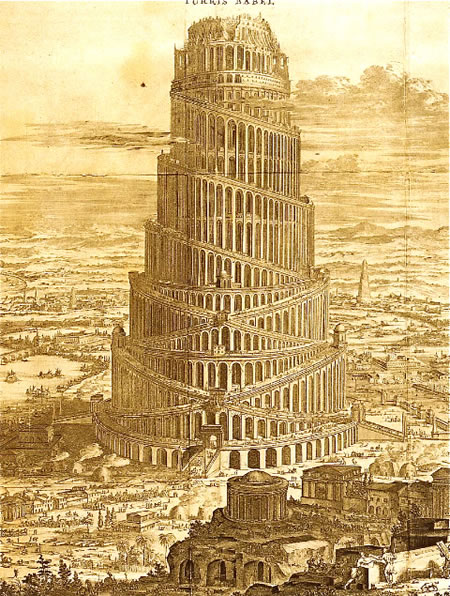 Even with this fabulous tower of information, all books are totally useless to the reader, leaving the librarians (of which Borges was one) in a state of self destructive despair. However, Borges speculates on the existence of the “Crimson Hexagon”, containing a book that contains the log of all the other books; the librarian who reads it is akin to God.

These mythic patterns are classical — a single magical character, a library that contains all knowledge, yet is somehow impossible to read or to know, and many of other Borges excursions are a draw into the mind of a profoundly powerful, and loved, Latin American literary prize winner.

But the story for me, after studying the work of a man that was nearly blind, was to meet him. Arriving in the evening, in NYC, I found him sitting alone, in the executive lobby of the NY Hilton. I was alone, he — sitting there, with his cane, contemplating. I went to him and spoke, along with his female companion, his perpetual secretary, Maria Kodama — later the inheritor, and his wife, of all his assets, after his death from liver cancer, in 1986. I thanked him for his work. I talked to him about the Aleph, his story — and what that meant for me, as a kind of transformational storytelling — the kind that, on reading, you are forever changed. And about my work, as a designer — a storied letterform worker and one that is tied to the magical workings of the alphabet itself as a transforming, illustrative tool — a shining light that brings literature to mind, from the hand, to mind, in imagination. Borges shared some thoughts, to the magic of the word, the letter, the library — the container of it all. Unforgettable.

The book, and what is contained therein, perfectly designed to be read, held in the hand — is comprised of the arrangement of thousands of letters, aligned as a sequence of content, contained the sheathing of pages — like the book’s etymology, liber — the inner bark of trees.

What beauty can be found in the imaginary journeys that are lead in the path of the book, story found, journal unfolded. Now held, embraced in memory.

More, to the book. The sensuality of the drawn page, in journal, journeyed. And the letterform, their expression, scripted.

What of the book, for you? And what stories have changed your life forever? 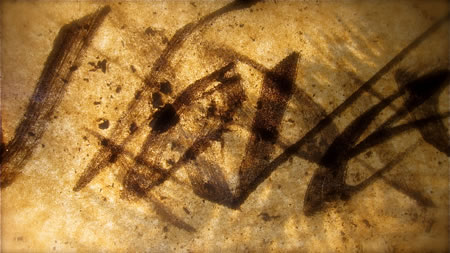 Image from TechFlash Taking pictures of Microsoft's opening retail with iPhones. Sometime back, a friend of mine offered to introduce me to the new leader of Microsoft retail. I won't mention either name, since it's pointless now -- I never connected, either by phone, email or any other form of link -- live or otherwise.…

Humanitarian Brand Development | Cause Related Marketing Development -- it's all about love.

What if your brand is about a cause? What if your brand is humanity? What if your real messaging reach is love? This is an overview of Girvin's strategic thinking about the nature of humanitarian and cause-related branding strategy and tactics. There have been a series of talks and presentations offered that reach to this…
We use cookies on our website to give you the best experience on our website. By clicking “Accept”, you consent to the use of ALL the cookies.
Do not sell my personal information.
Cookie SettingsAccept
Manage consent