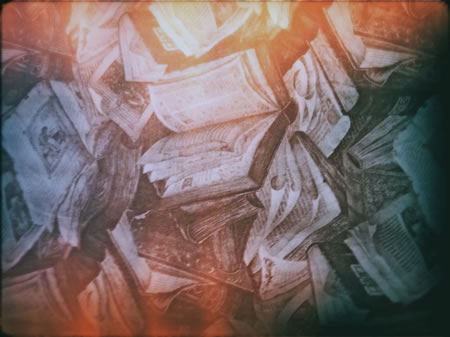 Books as objects in the design of interior experience

There’s something interesting to spaces that have books in them — books enrich place. If the experiencer is a reader, the first inclination is to study the books. And, as in Top Pot Donuts, a place here that shelves books as items of display, one might find an interesting tome here and there. But it might be just that — display. 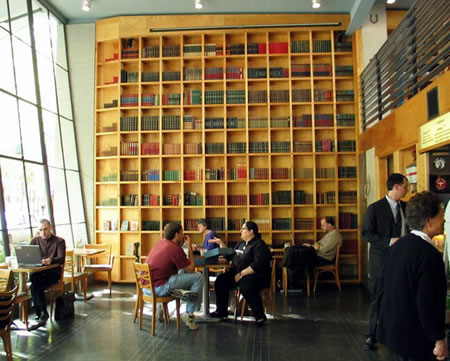 The idea of books in place-making is an art — that is, it would be all the more meaningful if the books had content that spoke to the experiencer. That’s hard to do — books are an entirely subjective question.

Still, even books, as objects, have memorial power — they relate to something, they suggest knowledge, accumulation, exploration, examination and the restless mind of the curious. 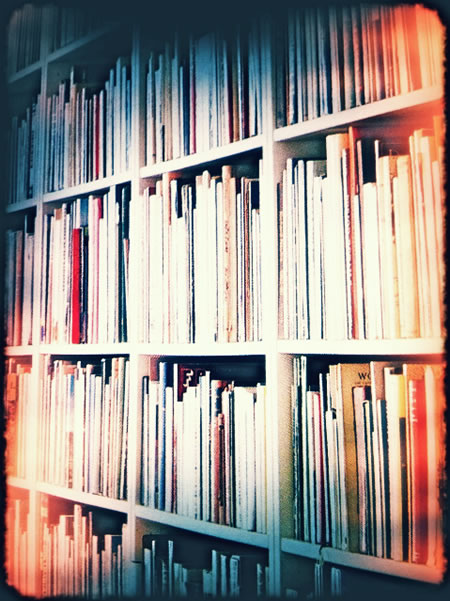 To that end, places with books have drawing power. In nearly every place that I’ve been — with books — there’s a certain captivation to the gathering of a multiplicity of stories, shown in one collective.

I savor their coalescence — all together, imagination bound.

In traveling, I find the book places, the bookstores, the libraries and the ideas that are wrapped around books, and the places that make them. Just down the street from the Seattle Girvin office, there’s one spot that celebrates that notation — bookishness, exemplified in the character of Ed Marquand — the Paper Hammer. Ed’s craft, as a book designer and publisher is a holistic ideation — it’s his career of multiple decades and lives in the legacy of dozens of superbly crafted published offerings. Besides that, a great person. Learn about (and explore Ed’s) Tieton.

I contemplate other environments, books loved and shown, or books (as objects) retained. Philippe Starck, who I first met in Paris, then Monterey, and finally in NYC seems to have a perennial love of books, not that I’d asked him specifically about this patterning. Two references from Dezeen‘s YOO interiors book, noting the booklover leanings of him, his team at YOO. 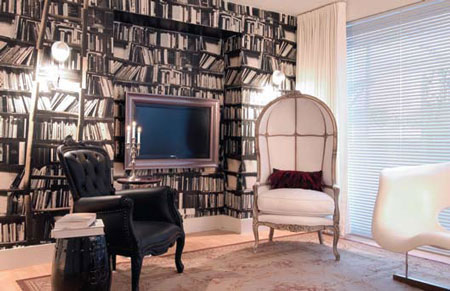 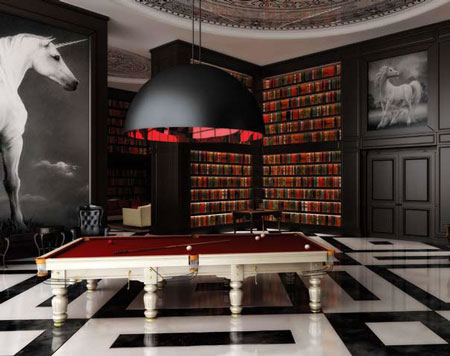 D’Espresso‘s new Lower East Side location in NYC is covered in tiles with pictures of books — books frame the floors and vault to the walls, leap to the ceiling. Dizzying, that espresso. 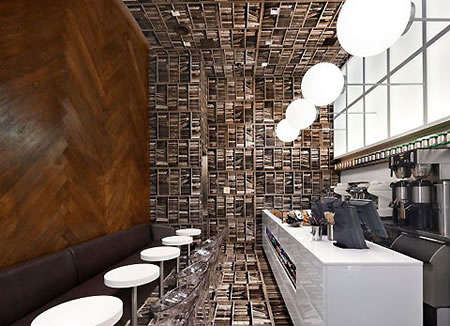 Reaching out, I note the 2004 article, “Books as Art Objects (Reading Is Optional)” Michael Frank offers, “‘Ninety From the Nineties: A Decade of Printing‘ is an exhibition built around a conundrum that lies at the center of most surveys of the book as object. The tension centers on purpose: books, which we are accustomed to thinking of as containers — and conveyers — of information, are placed in a context in which form is valued over content. Language is less important than the type that impresses it on the page. The paper counts for more than the story told on it. The illustrations and the binding might be the story. Words? Who needs ’em?

O.K., that may be extreme, though this cavalier — or perhaps more accurately, cheeky — attitude does seem present in some of the more inventive letterpress books on display at the New York Public Library, where Virginia Bartow has put together an exhibition that has a long tradition there. (Previous surveys considered the 1960’s, 70’s and 80’s.)

Ms. Bartow herself seemed aware of the puzzle at hand. Asked what drove her as she winnowed down to 90 the more than 4,000 letterpress books the library acquired in the decade in which they were made, she replied with a question that the show obviously hopes to answer in the affirmative: ”Can books, without much explanation, without being read even, say something?”

Is there an authentic “placement” for books, shelved as art, but ready to be read? 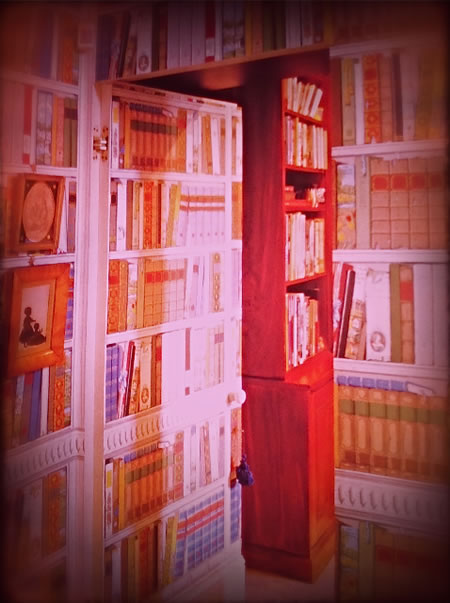 To the idea of design, and how could a book be a story, that’s a storied design, in that story? Legendary design theorist, writer and scholar Steven Heller studies that proposition in his notes on Jonathan Safran Foer’s “Tree of Codes”: Book as Art Object interview. 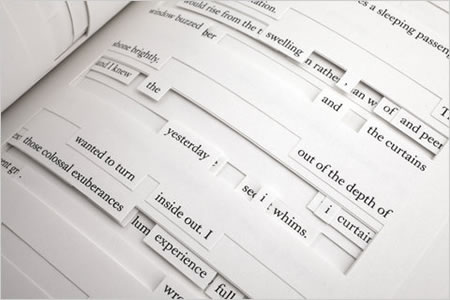 “His latest book, “Tree of Codes,” takes the integration of writing and design to a new level. As Visual Editions, the London-based publisher, describes it, the book is as much a “sculptural object” as it is a work of fiction: “Jonathan Safran Foer has taken his favorite book, ‘The Street of Crocodiles’ by Polish-Jewish writer Bruno Schulz, and used it as a canvas, cutting into and out of the pages, to arrive at an original new story.”

The result is a text of cutout pages, with text peeking through windows as the tale unfolds.”

Social media consultant Richard Darell, offers “what should we do with all those paper pages bundled into bricks of knowledge? Well, we could follow TU Delft Library’s example and create one of the most awesome front desks you have ever seen. It’s entirely built with unused books, and it works as a storage space as well as an inspirational front desk.” 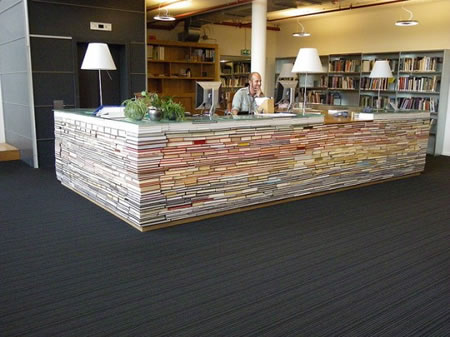 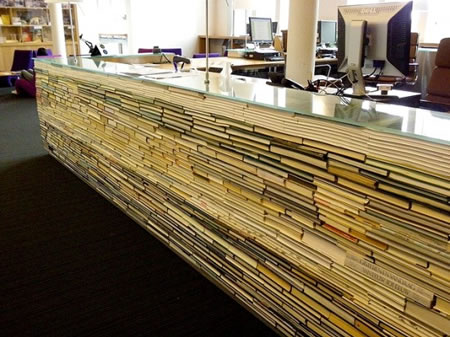 The book, rethought, can have other applications, artfully drilled. In 2006, The Mattress Factory, Jonathan Callan created a cleaved cross section of books, like the felled end of a tree. The gallery guide notes, “Callan has cut, scratched, folded and punched surfaces of original prints, paintings and photographs rendering the original virtually unrecognizable. In this manner, he draws attention to the objects we are surrounded by everyday. Callan addresses books as objects rather than sacred cultural artifacts and prompts viewers to explore ideas of materiality: what is a book and what is its purpose? Within a cultural context of hypertexts, virtual communication, the Internet and the commodification of books,Callan’s work encourages viewers to consider how we now address traditional modes of relaying knowledge such as through the use of textbooks, encyclopedias and atlases. In his artist statement, Callan describes his work as addressing, “the relationship of disembodied knowledge to embodied experience and materiality.” 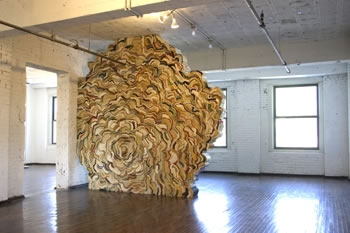 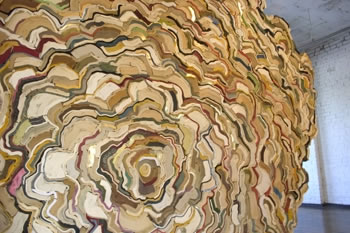 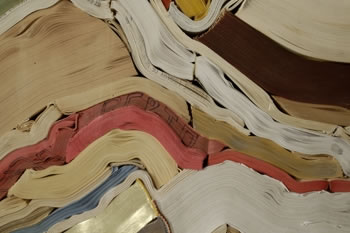 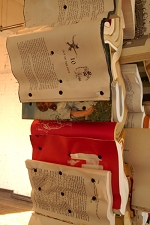 Imagery from The Mattress Factory

There is an emerging market to the idea of creating libraries, even for show. The NY Times offered another appraisal, buying books en masse to fill shelves, for collectors that aren’t collectors, that might want to look like collectors. Or people that read a great deal — implied erudition, one might suppose.

Penelope Green observes, in an article earlier this year, that for a years effort, Thatcher Wine — book assembler and library builder, founder of Juniper Books, amassed “2,000 well-preserved white vellum and cream-colored leatherbound books for a “gentleman’s library” in the Northern California estate of a private equity manager. Perfectly matched sets of books bound in antique vellum, a pale leather made from goat or sheep skin, are an elusive quarry, especially if they all have to be in English, said Mr. Wine, a former Internet entrepreneur who now creates custom book collections and decorative “book solutions,” as he puts it, in his Boulder, Colo., warehouse.”

Returning to an earlier observation, the design strategies of Monsieur Starck, for the “Icon Brickell, the icy glass condo tower in Miami, he was asked to wrap 1,500 books in blank white paper, without titles, to provide a “textural accent” to the space.

He chose mass-market hardcovers that flood the used book outlets — titles by John Grisham and Danielle Steel, or biographies of Michael Jackson, he said — because they are cheap, clean and a nice, generous size.

For another Starck project, in Dallas, Mr. Wine used black paper to wrap the 2,000 vintage books he picked for their “distressed edges,” so they could be displayed backward.” 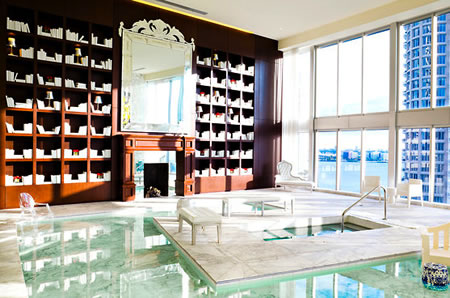 Green continues, “Book lovers, you can exhale. The printed, bound book has been given a stay of execution by an unlikely source: the design community. In this Kindle-and-iPadage, architects, builders and designers are still making spaces with shelves — lots and lots of shelves — and turning to companies like Mr. Wines’s Juniper Books for help filling them.

That idea of the wrapped book — reduced, as in the example of books for Icon, Miami to mere decoration — spreads to other “outlets.” Juniper’s taken to offering collectibles in new arrangements, like the book bundle decorative object for Pottery Barn. 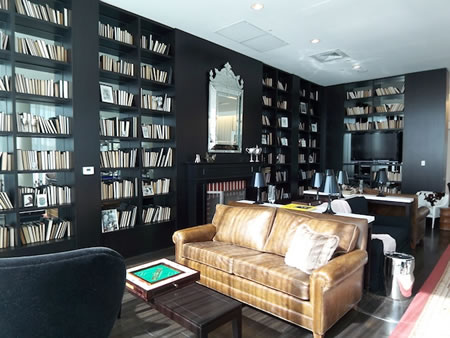 As Thatcher Wine notes, he’s filling a need — “We put a lot of work into making the book bundles for sale and they are very unique decorative accessories. We are thrilled to be working with a big company like the Pottery Barn, owned by Williams Sonoma Inc. and having them recognize the trend towards using books as decorative objects.” And indeed, as noted on Pottery Barn Book Bundle, they’re “purely decorative, the pages are glued shut.”

In Paris, Gallery Le Pied de Biche, is combining the modeling of bookstore, gallery and creative place-making as a kind of assemblage, “Books are art too,” said Tiffany Khalil, the gallery’s founder. “Le Pied de Biche is a move away from the classical, sanitized gallery. The aim is to create an uninhibited space, and put forward young, sprouting creativity.”

The gallery-bookshop is filled to the brim with various underground cartoons, rare books, fanzines, but also theatrical jewelry and toys for grown-ups. The gallery (86 rue Charonne; 33-9-81-71-32-09; www.lepieddebiche.com) simultaneously publishes, prints and shows its own limited series of books. The pieces are numbered, displayed and sold as artworks in the space.

Kitson is a boutique grouping in Los Angeles that’s popular for combining brand storytelling of stylish clothes and hip celebrity clientele. But there’s an added change — books. Kitson is finding a surprising source of revenue that is not from its fashionable shoes or accessories. It is from books. 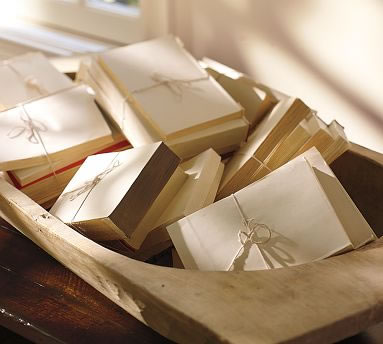 The company’s owner, Fraser Ross, estimates that Kitson sold 100,000 books in 2010, double what it had the previous year.

Publishers moved with increasing aggressiveness about selling to Kitson, Mr. Ross said, as traditional bookstores switched focus or closed. That “has been good for us,” he said. “If there’s a good book, we’ll go deep into it.” And publishers, he said, “realize what a specialty store can do for their business, with the window and the table.” 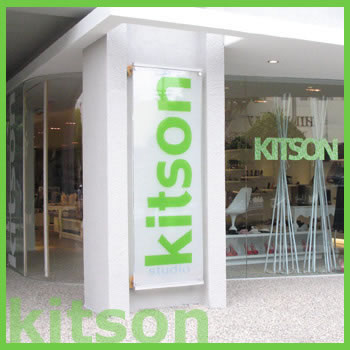 The fashion designer Marc Jacobs opened Bookmarc in Manhattan in the fall. According to the NY Times, “Anthropologie has increased the number of titles it carries to 125, up from 25 in 2003. Coldwater Creek, Lowe’s, Bass Pro Shops and even Cracker Barrel are adding new books.”

There’s a curious shifting in the nature of the book — one: where it’s sold and how it’s sold, but as well, two: the value of the book as a concept — moving from the containment of information and imagination, to something that suggests a certain intentionality or relationship to the object of the book itself.

It’s something that you can put there, but you don’t have to read it. And if that makes some people feel better about the idea of holding onto the book as a conception, then more to it — given their reign of nearly 1800 years, another century might be a worthy legacy to cherish.

Read on, that sensual touch, sight, heard turned pages and scent — the book, transforming the reader and that so-called experience in what might be called a dying art. Live, in the place of books. 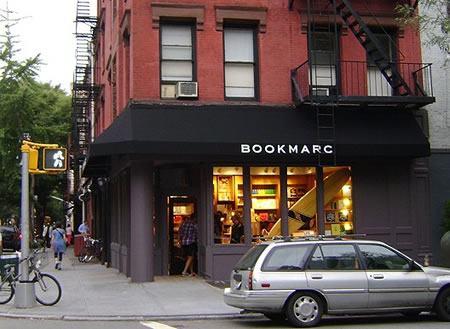 The Scent of Ink and Paper: the alchemy of the scribe, the stock, the flow of content

Girvin The drawn stroke of fragrance, scratched into the memory I go to the scent of drawing. That idea of the drawn scent is something that releases the molecules of creativity -- a crayon (of the Crayola type) pulls the waxy molding of the hardened shaft into a stroke of color: that scent is distinct.…

Resonance, Relevance, Relationships -- the three indices of connection and community Brands have to matter to be unforgettable. Given the flooding of exposures, those that are strong will require extraordinary staying power. But more importantly, to the nature of memory, the idea of impact will need to make two groupings of presumptions. These series relate…