The Rainbow Garden of Herbs

A LEGACY
AND
LETTERFORM LANDMARK
FOR RAINBOW MAGAZINE 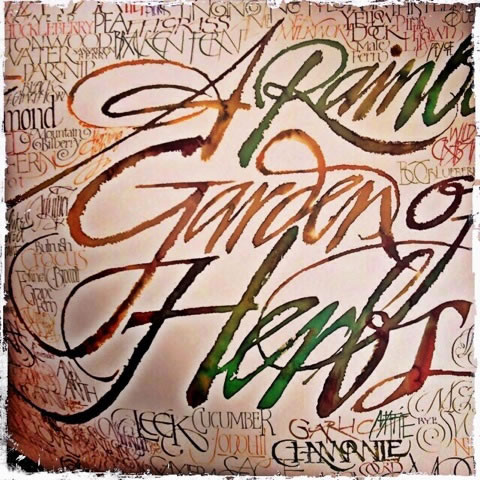 When it comes up to it,

the making of marks is an inherently magical proposition;

magic is definable as a insight and plane changer. It transforms perception and meaning in the momentum of recognition and inception.

This lies in the presumption of sorcery and “magical work” as tasking forces to enable præternatural transformations. In the moment of change and experiential transition, writing is a perspective changer—you see, read, infer meaning from some form of content, name, design, emblem, letterform or sigil, you are changed.

The seal of containment is newly made, or broken and remade.

You bring your own meaning to that proposition, and the value of it.

You, the reader, move from one plane of consciousness to another. You are changed.

I see that as especially applicable to the alchemy of calligraphy — or simpler, alphabet alchemy. 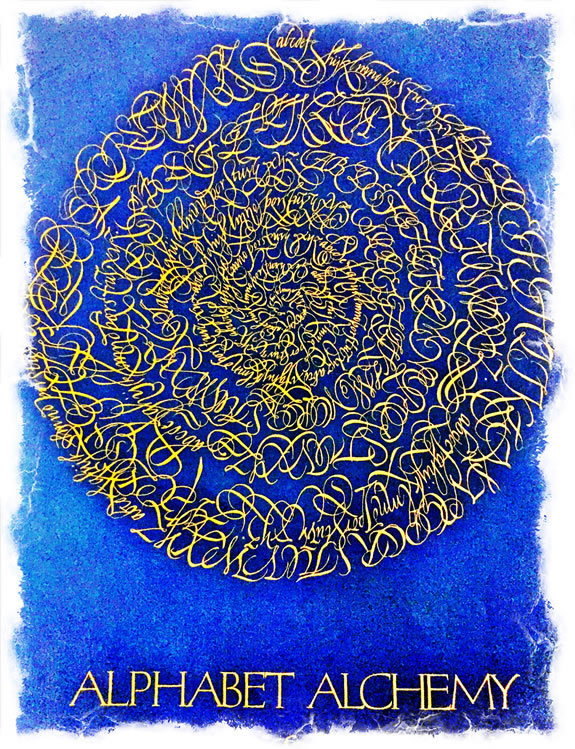 Drafting a letterform,
what happens?
A drawing is a drawing out;
draw a letter, the string of story unspools
and
it’s something more.

In a manner, the drafter is the namer of names, scribing the unnamed alive,

culling out the exhaled code of the message as a graphical expression on everything.

The word is a message, a talisman—and so true.

Amulets usually have their meaning spelt out,

as a measure to the demons that abound in our world—a presumption, and surely an ancient inclination—spirit traps, demon whorls, monster labyrinths, always have text as a warning. Fiends are trapped in reading the chant of incantations.

That’s where the power of the alphabet lives. 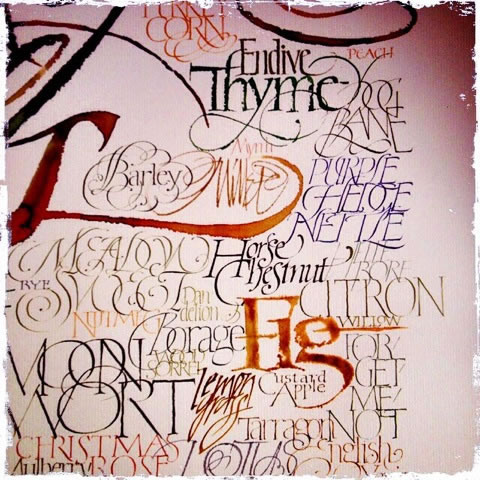 A letter is a map,
an anciently originated succession of markings,
a thought cartography,
a seared,
scarred,
scratched,
penned,
leaden-punched,
brushed,
colored
story in a story.

Flow on, in, through—
a sequential tablature:
s i n g—

the sight,
the idea,
the mind,
the message drawn,
the story told. 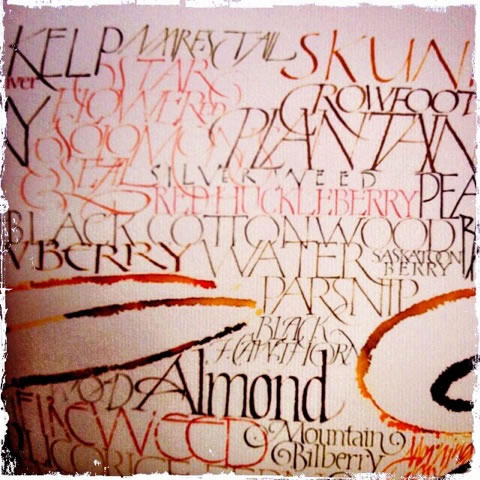 The letter is a portal
to another way of seeing.

Look at a letter, a string of letters in a worded construction.
And the reader goes from one place,
to another place. It’s an a-maze-ment.

A drawing out, to draw-in the viewer

who then becomes the experiencer. 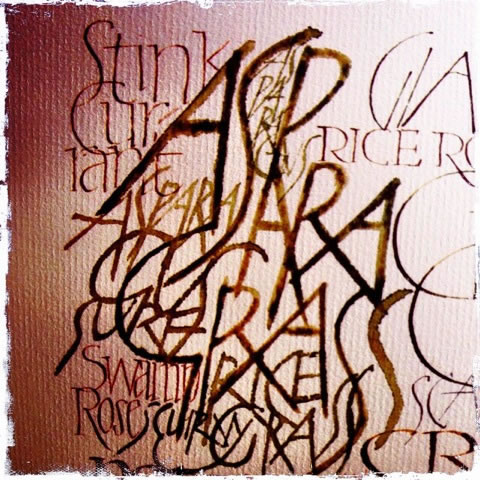 And on that constructive pathway, better still to define magic.
It could be suggested that the inherent character of magic is transportive, it moves comprehensive perception from one plane to another. An observer of something magical is transported from one realm to another. The movement is literally other-worldly in the literal context of moving to other realms of experience. That visitor perceives another plane in addition to that which might be commonly accessible to others. The reader, the experiencer, moves along — from one seeing, to another.

Magic, aside from the coin disappearances and card twirling, could be expressed as a perceptive momentum — understandings cross consciousness. Entities appear. Forces engage and transform circumstances. In what you see and know, the magical translation moves to a different pacing – a surprise engenders transposition of understanding. Magic and creativity are intertwined, since in the qualities of translation of circumstance and perception are interwoven to generate wholly new ways of seeing things.

In a matter of definition, the experiencer is transformed.

And comprehension, to prehend, is to hold.
What, in your journey, do you hold? 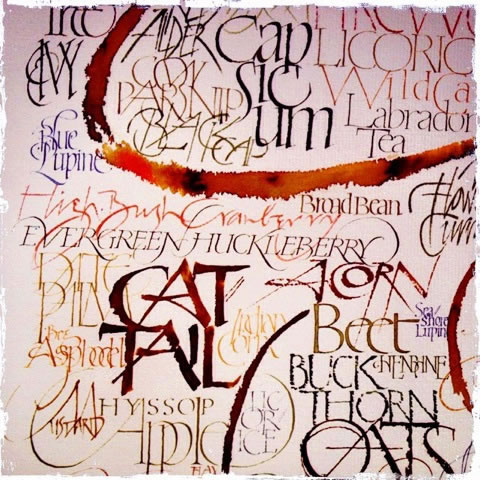 Apple noted this in their first-time positioning
of the iPad, with Peter Coyote’s voiceover.
“A magical and revolutionary device at an unbelievable price.” (2010)
The conventional wisdom presupposes that magic is “the power of apparently influencing the course of events by using mysterious or supernatural powers.”

Mystery and
the super-natural.

I live
and work
there. 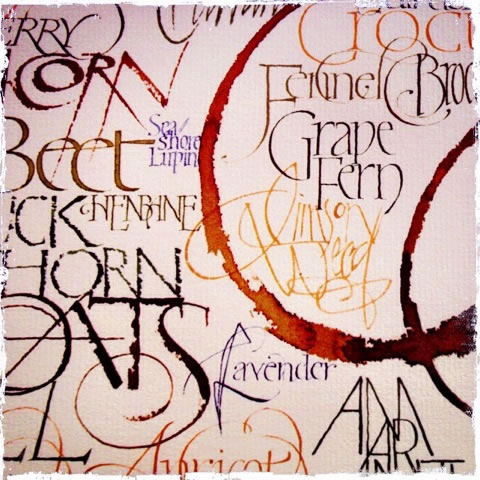 Mostly since “I believe,” as the song goes, “in magic,” and the making of it.

You might scoff, “that’s ridiculous.”
Could a letter be magic?

It’s not newly invented, but ancient.

That legacy is about 5,000+ years old. And this is, by no means, linked solely to western culture. The idea of the alphabet and the phrasing of magical symbolism,
spell-binding and biding, protection and 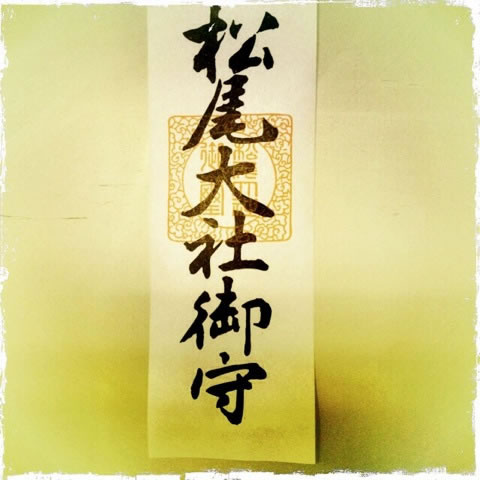 the warding-off of evil are
traditions that extend, in Asia, even to this day.

Like the protective seal above, from a 400 year old saké brewery. 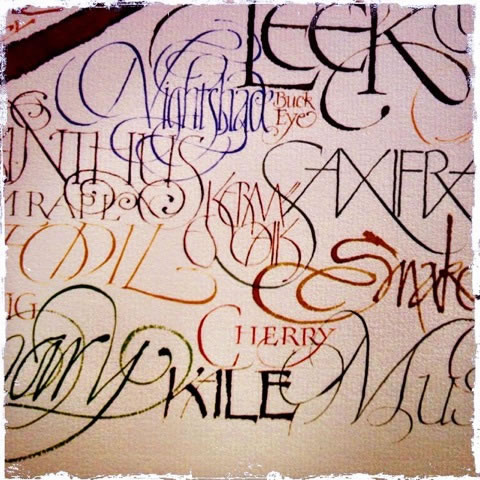 Very early in my career,
the idea that the alphabet written
has this innate power might be expanded upon
as a positioning — one, a letter drawn is reflective, it’s drawn from the ancient, sequential hand-scribed method, coupled with meaning and memory and is seen and understood by the conscious surveyor.

What that letter means is a deepening of that impression.

Draw the word, the lettering string.

Read that word, and you’re carried somewhere, held, transfixed, spellbound in the story.

Two, there is deep magic in their legacy of 1000s of years of drawing, gathered from the stars and nature,
the scribed demarcations of a reach
to a higher potential, clarity, relating,
and that carrying away,
the content held in memory.

Add details, color, the form and shaping of the mix of content between the letter and its meaning

and that migration is all the more powerful. 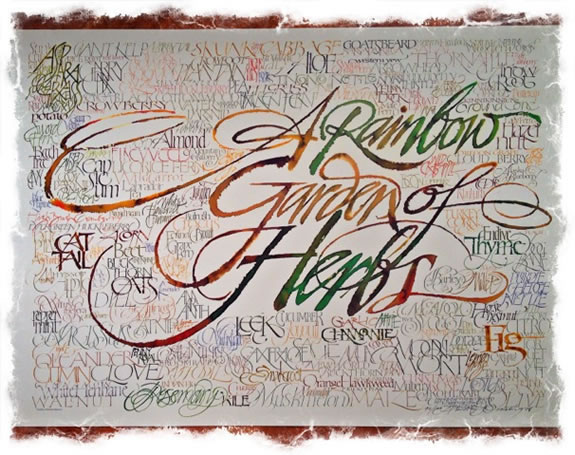 Hence, in 1977,
in a commission from Robin & Heidi Rickabaugh
in a series of creative collaborations at Rainbow magazine, created, designed and published by their partnership,

I drew out a magical comparison between the idea of a letter, a word, and how they might be made to shine in one grand lettered and color-washed gesture:
“The Rainbow Garden of Herbs.”

In that craft, bewitched or otherwise, I drew that entire broadside as a new experience [for me] of combining that inspiration of the drawing of ideas, words themselves, and inter-leaving them as a layering of content — all rendered freehand on one vast sheet of handmade paper — an interpretation of one, nestled to another, as a garden whole. I mixed my own pigments, stirred-in gums and water and rendered that as a lustration—a shining— an illustration.
For me, it was a magic moment,
for I’d long believed in
the idea of a word,
well-drawn,
could have power. 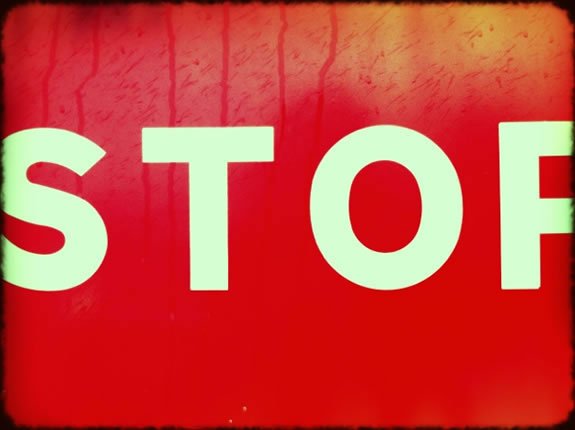 Sure, these are signs,
but they hold a layering of meanings that go beyond the mere glance.
Stop, which might be defined as a magical word of holding and protection [in fact, many protective phrases and incantations essentially begin with stop.]

While one might not define
such a simple message as anything mysterious or supernatural —
but the power of it is realistic enough — message and design, combined,
translates content from one plane to another point of perception
creates a new string of insights. 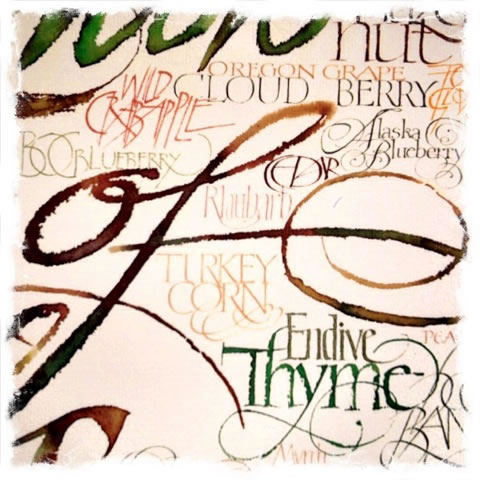 As with everything,
there is a message
inside the message.

There is a code,
in the draft of a letter, that is
deeper that the line alone:
a message,
a portal,
a doorway,
a trap.
A demon entrapment bowl,
with written incantation,
for protecting home and family. 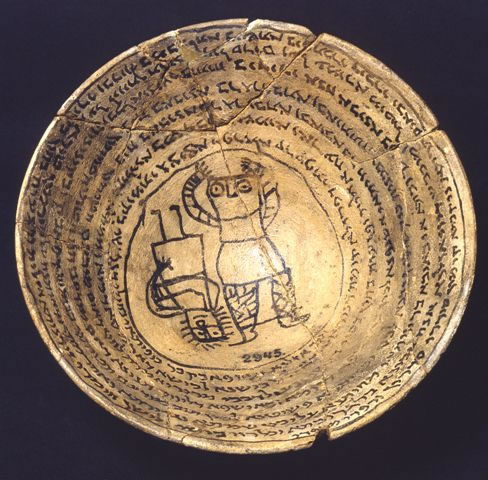 And as we all know,
it’s never just the facts,
it’s the story, the practice,
that you believe in,
magic or not.

Even an herb
can have import.

WHAT ABOUT THE IDEA THAT COMES AS A SPARK, A LIGHTNING BOLT, A BLINDING BURST OF LIGHT AND SUDDEN INSIGHT? Now I see m o r e. There is a global mythic legacy of the thunderbolt; you might recall that there is some familiarity for you— a lightning strike moment, that you remember something of…
We use cookies on our website to give you the best experience on our website. By clicking “Accept”, you consent to the use of ALL the cookies.
Do not sell my personal information.
Cookie SettingsAccept
Manage consent