The rise of "spec:" doing creative work for free 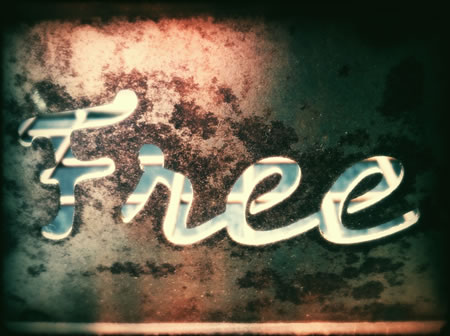 I was in an argument with the team at Toyota — for what seems like months; lots of errors, miscommunications, challenges and failures to really provide the kind of service support that Toyota is famous for. Or, at least — they say they are.

These days, this past year, that might be changing. The past several years, and 2011, were disaster years for Toyota. In expressing the idea that they should do something for free – there was a sidebar remark that, “well, in the service department, that’s how we survive.”

That got me thinking — about survival. As strategist, writers, designers, working for more than 35 years in a string of projects, it’s interesting to see the emergence of “spec” work.

That is — doing work for free, to win work. It’s not the strategic pinning that helps define the reasons why, or the thinking — it’s doing key conceptual visualized strategy on the presumption of winning. And winning more. Good way to begin a relationship? “Hey, they did that for free, so let’s see what else we can get.”

In the field of architecture, I can recall — during the 80s — when this emerged.

“Here’s our building idea — show us how you’d answer this challenge, in competition, and we’ll choose the best firm.”

Back then, 10s of 1000s of dollars would be spent. Now, it’s millions. Speaking with the principal of one of the largest architectural groups in the world, he’d referenced, “we’re now being bankrupted by literally hundreds of thousands of dollars of speculative assignments, client expected — on an ever-growing pace.”

Friend and colleague, John Gleason, a consultant that we’ve known for some time, since his days at P&G and more recently as the founder of a strategic consulting business alliance — a creative synchrony network — Better View Strategic Consulting, has some added insights, noted below.

While this is agency related discussion, we well know the challenge of this positioning; in 2011 we have lost at least two projects to firms that have chosen to completely “finish” the creative for a pitch — offering completed websites and formalized signing systems that “won the work because they were done.” Read on.

Why Spec Creative Should Go Away but Won’t
Pitch Practice Allows Agencies to Show Off and Affords Marketers a Level of Comfort
By: Jack Neff Published: January 09, 2012

If ever there was a bone of contention between agency and client, it’s spec creative — an agency producing work, solicited or unsolicited, to dazzle a prospective client. And while even some client-side people are beginning to question its value, the practice isn’t going away anytime soon.

John Gleason, a former marketing-procurement executive at Procter & Gamble and founder of A Better View Consulting, holds that spec creative consumes as much as 1% of industry revenue — a big chunk, given profit margins of 6% to 10% in recent years for big agency-holding companies.

“I don’t think clients fully appreciate how this adds cost to the infrastructure of the industry,” Mr. Gleason said.

The hidden cost of spec creative accrues to all clients, he said, since the creatives assigned to the pitch are often drawn from existing-client teams. Moreover, there is no guarantee that employees working on the spec pitch will ever actually work on the account. In fact, Mr. Gleason’s research suggests that about a third of people working on a new account tend to be hired away from the brand’s former agency.

Arthur Anderson, principal in the consulting firm Morgan Anderson, estimates that well under 5% of creative produced during reviews is actually used in the market.

Mr. Gleason said the procurement executive in him would like to see money spent on spec creative go toward reducing fees. He doubts that would happen if spec creative went away but believes at least staffing and quality of work for existing clients would benefit.

One agency executive who requested anonymity called the practice “an antiquated beauty-contest model that doesn’t cut it in a complicated world.” Beyond being unfair to agencies not compensated for their work, he said spec creative doesn’t often reflect how the agency and client will work together in the real world.

P&G has seldom used spec creative for reviews, and some other big marketers are clearly moving away from it. Kraft Foods, for example, went with the project approach over traditional reviews, using spec creative for “Operation Spark,” in which it summoned new ideas to market for some of its smaller brands that didn’t have existing agencies.

Of the process in which Kraft paired five agencies with five brands for eight-week assignments, Kraft Senior VP-Marketing Strategy Dana Anderson said, “We paid for the date,” in an October speech at the ANA annual meeting.

Kraft ‘s “courtship process” is far superior to reviews that involve spec creative because it engenders “true collaboration” rather than asking agencies to develop solutions largely in isolation, said Andrew Essex, CEO of Droga5, whose shop was selected to work on Athenos yogurt in “Operation Spark.”

Curiosity Advertising, Cincinnati, has eschewed spec creative in most new-business wins as it has grown to 30 employees from two since its launch two years ago.

CEO Greg Livingston prefers a review process in which agency principals meet with a prospective client to talk about philosophies, personalities and how the agency works. “The true challenges are about chemistry and trust,” Mr. Livingston said. “If you look at an agency’s portfolio of work for previous clients, that should give you a pretty good picture of their creative style.”

Also, spec-creative reviews can be unfair, Mr. Livingston said, when the outcome is largely preordained. As an example, he cited one review in which Curiosity participated: A chief marketer had 14 agencies submit spec creative before selecting the shop he’d worked with at a prior job.

Not everyone is opposed to spec creative, depending on how it’s defined. Mr. Anderson, of Morgan Anderson, believes the practice is a bad idea when it includes full production of finished creative, except in cases, such as a Sears review years ago, where the client was holding a pitch in the summer for work that needed to appear by the fall.

But he believes a process that gets the finalists — generally no more than three — through a creative-development process leading to storyboards or concepts is the only way most clients will be comfortable making a selection.

Realistically, Mr. Gleason said the only shops that can afford to routinely reject reviews requiring spec creative are smaller independents without large fixed overhead or hotshops. As a result, he said, leadership on ending the practice will ultimately have to come from clients.

David Beals, president of consulting firm R3JLB, said spec creative isn’t likely to go away anytime soon. “A lot of people probably don’t realize that the momentum behind spec creative came from the agencies, not the clients,” he said. “When clients conducted reviews years ago, even when agencies weren’t asked to bring spec creative, they would. … So I don’t know even despite all the protests that agencies are going to walk away from that concept anytime soon.

This last comment is most relevant, commenting on the character of how “spec work” began. In the 80’s competitive zeal, it was the architecture firms that started their own treatments of creating free work — to get out there and see their ideas actualized.

There's a story about beautiful garbage, based on the idea of one person's -- a team -- visioning of a litter free place. That being -- an alley. In Seattle, the founder team came up with the notion of "dumpster free" alleys, by engaging community members in seeking a sorting approach, to building out that…

Which way are you listing? open, sourced? foundation: sharing. –––––––––––––––– Vince -- good question last night, listening into our meeting; "how does a meeting with people that you've never met becomes a familial love / hug fest?" Silence -- and observative, feelingness –– listening. The way that you hear is by being quiet and watching…
We use cookies on our website to give you the best experience on our website. By clicking “Accept”, you consent to the use of ALL the cookies.
Do not sell my personal information.
Cookie SettingsAccept
Manage consent