The Scent of Ink and Paper: the alchemy of the scribe, the stock, the flow of content 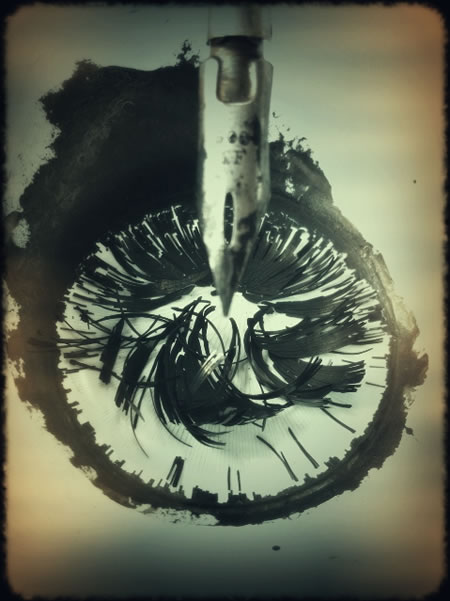 The drawn stroke of fragrance, scratched into the memory

I go to the scent of drawing. That idea of the drawn scent is something that releases the molecules of creativity — a crayon (of the Crayola type) pulls the waxy molding of the hardened shaft into a stroke of color: that scent is distinct. Chalk, scribed, scents a dusty hint, the powder rises in the air about the sheet like the smoke of a diatomaceous earth. Charcoal fractures a splintering of burned wood. The lead pencil drafts a certain chemical response, the ruled line emitting puttied layers of soft plumbum. An aluminum blade, draws crackling metallic tones. Other tools bring forth the paper — a brass drawing tool can rip the surface of any paper, with hand scribbles, that perfume rises — papered, woody, pulpy.

But ink offers an entirely different vocabulary — since ink can come from other materials; the wash of ink usually comprises (Wikipedia), a complex medium, composed of solvents, pigments, dyes, resins, lubricants, solubilizers,surfactants, particulate matter, fluorescers, and other materials. The components of inks serve many purposes; the ink’s carrier, colorants, and other additives control flow and thickness of the ink and its appearance when dry. An ink is set in classes of powders, pastes, liquids and aqueous matters. The nature of ink, dried, is a crystalline layered composite, bound to the stock. There’s more to the history of ink, reaching back in time. According to archaeological ink studies, ancient cultures around the world formulated inks for writing and drawing. The comprehension of inks, their composition and their production techniques are derived from chemical sampling analysis or from the written text under examination.

An ancient beginning of the nature of ink making, Chinese liquid pigments can be traced back to the 18th century BC, utilizing natural plant dyes, animal, and mineral inks based on such materials as graphite that were ground with water and applied with ink tools, reeds and brushes. Evidence for the earliest Chinese inks, similar to modern inksticks, has been dated to 256 BC made from soot and animal glue.

Classically named India ink — the inking material of ancient India — might be dated from the 4th century BC and was called masi, formulated of burnt bones, tar, pitch, and other substances. Kharosthi Indian documents written in Kharosthi with ink have been unearthed in Chinese Turkestan. Ink writing practices with a sharp pointed needle was commonplace, Jain sutras were transcribed in ink.

In ancient Rome, atramentum the inkstand, containing a black liquid, potentially made from octopus ink, was used. In the Christian Science Monitor, Sharon J. Huntington describes these other historical inks:

“About 1,600 years ago, a popular ink recipe was created. The recipe was used for centuries. Iron salts, such as ferrous sulfate (made by treating iron with sulfuric acid), were mixed with tannin from tree gallnuts and a thickener. When first put to paper, this ink is bluish-black, over time fading to a dull brown.

“Scribes in medieval Europe (about AD 800 to 1500) wrote principally on skins of vellum or parchment. One 12th century ink recipe called for hawthorn branches to be cut in the spring and left to dry. Then the bark was pounded from the branches and soaked in water for eight days. The water was boiled until it thickened and turned black. Wine was added during boiling. The ink was poured into special bags and hung in the sun. Once dried, the mixture was mixed with wine and iron salt over a fire to make the final ink.”

The reservoir pen, which may have been the first fountain pen, dating back to 953, when Ma’ād al-Mu’izz, caliph of Egypt, demanded a writing tool that wouldn’t run pigments on his clothing and hands, and was received a writing instrument that held ink in a containing channel.

In the 1400s, a new type of ink was developed in Europe for the moveable type printing press designed by Johannes Gutenberg. Before this invention, there were two predominant types of the Greek and Roman writing ink (soot, glue, and water) and the 1100s composition, based on ingredients of ferrous sulfate, gall, gum, and water. As handwriting inks they couldn’t adhere to printing surfaces without smudging. An oily, varnish-like ink made of soot, bound with turpentine and walnut oil was created specifically for the printing press.

To each, one might contemplate their scent — gall, a kind of bitter wooden fragrance, the salty notes of octopus ink, briny black; the perfume of the carbonized soot, roots and bone. I’ve got some pigments that I’ve been using for decades (stored and reused time and time again). And these gather up a whiff of earlier drawings, the ink coloring the memory and earlier experiences. I can recall the scent of inks on warming wood, drawn in the sun — the combination of the vapors, seeping up; I have memorized drawing on stones, where the earthen or sea-tinted salted rocks bring forth the evocations of place, the brush bringing out new levels of fragrance. Each, recalled — that drawing out, literally.

There are scents that can be found in pigments that are deliberated noted in perfume. One, I’ve noted in Byredo’s offering. Ben Gorham contemplates their inked solution, papered. 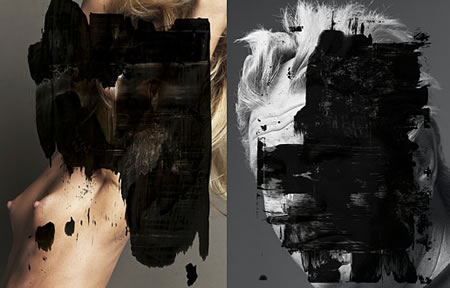 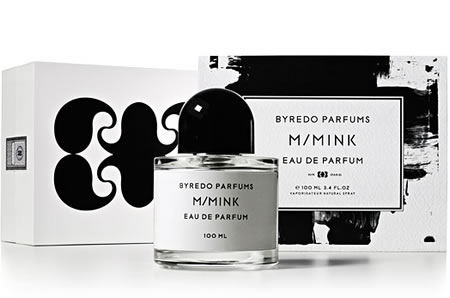 Another, J. Herbin, has a distinct accord of scents from the fragrance capital of the world, Grasse. They note, to history, their products, “J. Herbin is the oldest name in pen inks in the world. M. Herbin created “The Jewel of Inks” in his shop on the Rue des Fosses Saint-Germain in Paris in 1700.

Herbin uses all natural dyes in their fountain pen inks. This natural composition is reflected in the very neutral pH of the inks. Each bottle of 30 ml/1 oz ink is elegantly labeled and has a pen rest. They are known as “D bottle pen inks.” The “D” refers to the old French unit of measure “la Demi Courtine.”These exquisitely charming inks, lightly scented and presented in elegant semi-frosted bottles, are perfect for fountain pens since they are naturally scented and do not contain pigments.

And to their scented collection, “J. Herbin scented inks are made from floral water (hydrosols) of rose, orange, lavender, apple and violets. The hydrosols used by J. Herbin come from Grasse, France, a Provencal town long associated with the perfume industry, and famous for its floral scents.

Fashioned with great care, scented inks are inspired by a tradition that began in Italy in the 19th century. J. Herbin and other manufacturers used to collect different scents from the perfume industry and add them to their inks.

Picturing love drawings, letters, the pigment — and the scent, regardless of the layering, mixes gesture, memory, the touch of perfume — whether of gall, tannin, herbs or an animalic accord, the efflorescent experience — touch, sight, the sound of paper and crafting pen sorts the notations of completeness.

The perpetual waft -- the perfume of curiosity, manifold experimentation, exploration

Books as objects in the design of interior experience I like books. I like being in places with books. Libraries draw me. Bookshelves captivate me. I love books. There's something interesting to spaces that have books in them -- books enrich place. If the experiencer is a reader, the first inclination is to study the…
We use cookies on our website to give you the best experience on our website. By clicking “Accept”, you consent to the use of ALL the cookies.
Do not sell my personal information.
Cookie SettingsAccept
Manage consent