The Script of Being | Drawing Words and the Orienteering of Alphabets 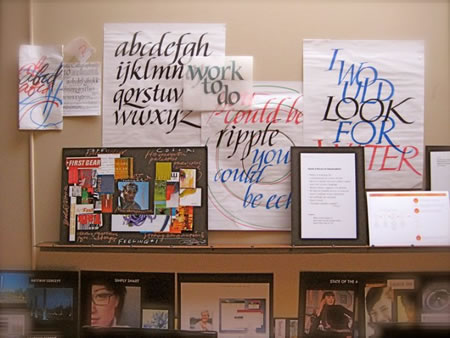 The Draft of Knowing — Stroke on Stroke, Journey to Journey, Line to Lineage.

A couple of years back, I was exploring the hand drawing of letterforms, with a team from Girvin, Inc., a teaching workshop — and it was about finding motion, gesture, the curve, the light and the dark, what is seen and stroked, and what is left blank — untouched.

I’d been teaching calligraphy, once again — since college time, I used that as a fund-builder for tuition at the Evergreen State College.

It comes back.
Actually, it never goes.

Drawing a letter is like drawing an idea — your sketch makes the voice of a textual layering, point to point, thought to idea, motion to arc, curve to making.

And I’m thinking about going back, team up to the journey of the marking and the making: the stroke,

A voice, a whisper — drawn out like a string of beads, each a whisper, a thought.

Soon then, it’s another cadre of Girvin designers.

During that same day, I had a reconnection with friends from the past — long past.

Lynda Weinman
Linda Stone
Bruce Heavin
And given the happy changes for
Lynda, Bruce, and Lynda.com,
I redraft and repost that memory. 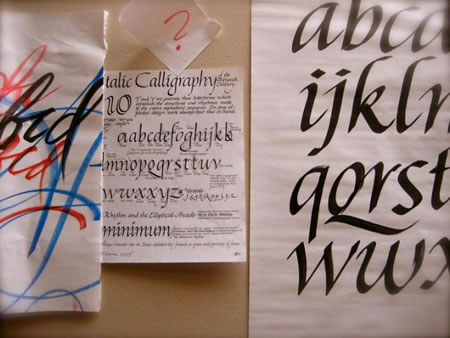 These were friends, fellow students, from the Evergreen State College.

Earlier that week, 4 years ago, I’d gone back to the Evergreen State College, reconnecting with the Media Lab there — which is now newly named the LyndaLab — there’s a room that’s especially dedicated to her contributions to the school. Lynda Weinman, along with her husband, Bruce Heavin, those Greener grads that founded Lynda.com.

More on her, here: http://www.womenandbiz.com/2008/09/16/interview-lynda-weinman-founder-lyndacom/. And her site is here.

and some demonstrations of calligraphy, teaching, drafting and meaning.

When you draw a word, a world of content emerges in the mere meaning of it. How you draw that word, and meaning, intertwines to create a momentary transportive magic. Read, you move someplace — learn, you evolve to another plane of being.

In a way, it all comes back to the idea of how is the story told — one, the breath of the teller, recalling the tales of the experiencer; another, two, the transcribing of that story — what is called beyond and carried into a point of new certainty, it has a place. And three, the imagination of the listener — a listener that might be sitting, sifting into the telling of the story, to another, who is reading and embracing the telling of a story. 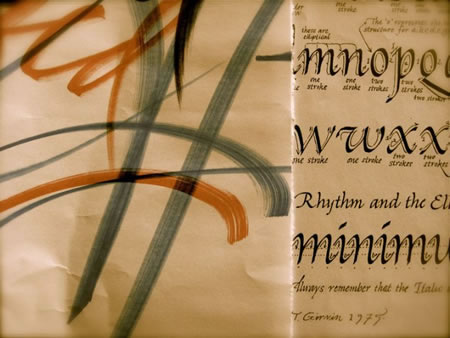 A calligraphic knot, along with the original worksheet, from the Girvin / Evergreen State College workshops, 1975.

Beautiful — what was old, what was new, what could be found, and what is recalled — and newly discovered.

The letter form is a bundling of the idea, curves and black, light, openings, structuring, the architecture of speak, the thought, scribed.

And that story rolls on. Lynda.com was sold to LinkedIn for $1.5Billion.

Nice for them.
Now what?

G I R V I N | WRITE NOW:
THE MESSAGE IS THE VOICE
DESIGNED TEXTUAL CONTENT: THE BREATH OF SOULBRAND
http://bit.ly/sJ4IjO

The Aesthetics of Rust

Wabi Sabi and Beauty There is a perspective that things that have lived for a long time are worthy of respect and admiration. Old is more beautiful. You can’t fake old. Wabi Sabi. That Japanese principle of beauty in age comes to a reflection of two principles — rustic utility, and aged by use =…

Who Do You Love?

Love Brands: Relationships, Commitments and Storytelling. I did this installation, out on a cliff, away from everything, looking out — the deep blue sea. And the sun. And I was “looking through L O V E,” thinking about that ancient question: "who do you love?" "And what do you love?" If I ponder the most…
We use cookies on our website to give you the best experience on our website. By clicking “Accept”, you consent to the use of ALL the cookies.
Do not sell my personal information.
Cookie SettingsAccept
Manage consent