The Skull, the Flame, the Rod | Don Ed Hardy and Von Dutch 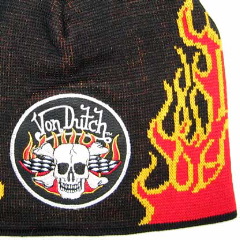 How might that alignment be imagined — a link between the above?

I’ve been exploring invented brand culture — that, in the one, might be aligned as partially invented — and, in the other, might be wholly linked to a previous, yet newly recalled, vitalized culture. That past culture might be the hot rod art of the 60s, or the car culture of the 50s, the interlacing of American and Japanese cultural links in the 40s, and so on.

I’ve had the chance to work on brand development and evolution for enterprises that are hundreds of years old (Encyclopedia Britannica online conversion) to businesses that are more than one hundred years old (Capezio) to entities that are just starting up (Tableau). But it’s always about finding the story — who represents the founding of the culture and what the relationship to audiences might be. Who’s telling the story and who cares about it? These are two stories, Don Ed Hardy and Von Dutch that I’ve been curious about. 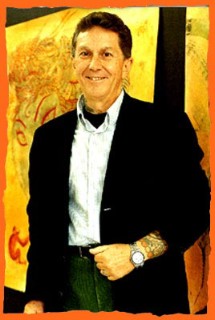 The site tells that the story begins with 40 years of tattooing and legendary status among the tattoo community, Don Ed Hardy is known as “the godfather of modern tattoo”, for his sophistication, depth and sense of experimentation. California native Don Ed Hardy is recognized around the world for his technical brilliance and mesmerizing imagery. 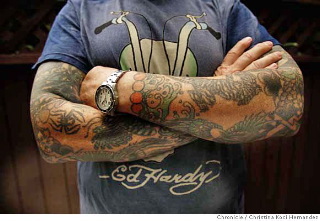 Mr. Hardy, as the website references — pulls from life experience to meld American, Japanese, Cholo, tattoo, surf and hotrod iconography. And I’d comment here that this is very much about the character of this exploratory, in brand, in personality — exploring and evolving brand culture.

Hardy is a painter, printmaker and tattoo artist. Fascinated by tattoos since childhood, Hardy has become a master of his craft while continuing his work in the more traditional mediums of painting and drawing. Hardy’s work — as the brand originator — is represented in the collections of The Honolulu Academy of Art, The Contemporary Museum, Honolulu, The San Francisco Fine Arts Museum Achenbach Collection, and the University of Colorado Fine Art Galleries.

This broad spectrum of taste and experience, coupled with an ongoing investigation of various art histories and a mastery of technique, give his work a unique range and depth.

His work looks like this, applied to clothing, choppers and related paraphernalia: 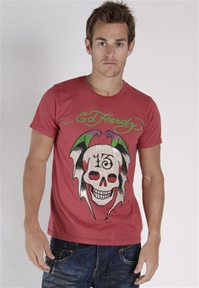 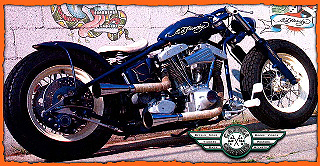 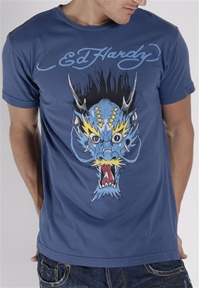 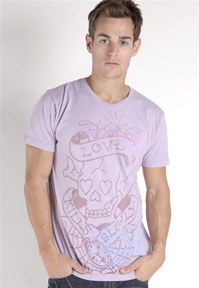 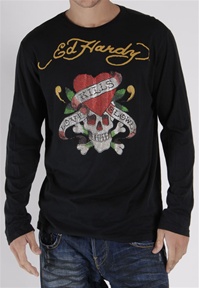 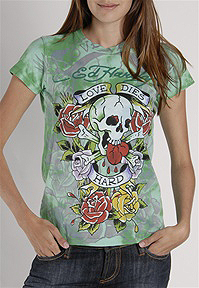 Jesse Hamlin notes: “his blazing images of devils, dragons, bearded ladies and Buddhas — informed by old master etchings, 12th century Japanese “hell” scrolls and 19th century woodblock prints, Southern California hot-rod striping and the funk and humor of Bay Area art — are widely exhibited and collected. And for the past year or so, his early tattoo images, the “retro” skulls, sailor girls and derby-topped dragons now in vogue, have appeared on T-shirts, jackets, motorcycles and even energy drinks sold worldwide under the Ed Hardy brand.

There are now Ed Hardy stores in New York, Los Angeles, Tucson and Dubai. That $20 million-a-year business, of which Hardy gets a small slice for licensing his name and art, is the handiwork of French-born marketing ace Christian Audigier.”

What’s interesting about this story is the cultural legacy of tattooing that led to the foundation of a brand – a premise and promise and a commercialized extension to culture. Don Ed Hardy is real, alive and still working. Don Hardy’s branding was taken up by another — Audigier’s marketing wizardry — who developed the brand into the expanded enterprise that it is today. One true story, comes out to another.

That’s a differing proposition for another brand story, below. At once celebrated, yet challenged by darker legacies in the character of the man, his way of living and the brand principles therein. While Hardy’s presence is focused on an early fascination with marking the body with colored felt pens and Maybelline liner, creating his early tattoo art, Von Dutch’s character is entirely differing.

Who is Von Dutch? 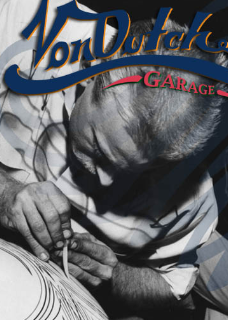 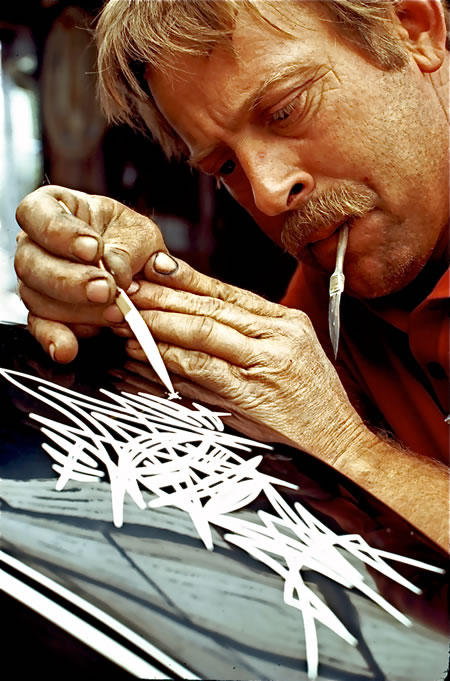 Von Dutch originates with the recognition of the revitalization of “kustom kulture”, a grouping car of enthusiasts that originates the hand built hot rods and muscle cars. His place in the opening action is nearly mythical — and the brand draws from his revolutionary service, dedication and (mis)adventures.

“Pinstriping on cars and motorcycles was a dead art when 15-yr. old Kenny Howard went to work in George Beerup‘s motorcycle shop in the mid-forties. The last automobile striping on an American car was done by General Motors in 1938. Then, in the mid-fifties, customizers brought it back in style in mostly radical form believing they were doing something entirely new. Kenny, the motorcycle mechanic, was the man who started this “new” vogue under the name “Von Dutch.”

Dutch’s Dad was a well known designer, sign painter and goldleaf man in the South LA area known as Maywood. The well known Western Exterminator Logo is an example of his work that lives on today. 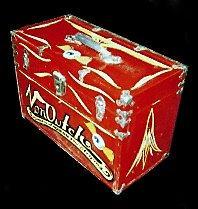 Dutch would occasionally bring a bike home from Beerup’s shop to borrow his Dad’s brushes and put pinstripes all over it. When Beerup saw what Dutch had accomplished, he couldn’t believe it, and moved him from mechanical work to painting and striping. For the next decade, he built a reputation that he really never wanted.” 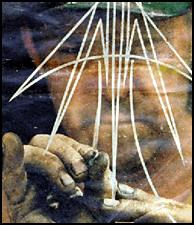 “I’m a mechanic first,” he used to say. “But, for the next several years Dutch painted and pinstriped nothing but motorcycles, moving from shop to shop, saturating each area. By the mid-fifties he had done thousands of bikes, but very few cars. Striping cars started as a joke when he was working at Al Titus’ motorcycle shop in Linwood, California. The whole car striping idea started to ‘snowball’ and he was there.

When Dutch quit striping in 1958, he was still in great demand. Customizers from all over the country had heard of him, and cars came from as far away from the L.A. area as New York to be “Dutched.” When a car owner came to him, he didn’t tell Dutch what he wanted, he just told him how much ‘time’ he wanted to purchase. The designs were up to Dutch, and many of them were created way down deep in the recesses of his eccentric imagination. He had hundreds of imitators and followers; Shakey Jake, The Barris Brothers, Tweetie, Slimbo, Big Daddy Ed Roth and many others.”

Part of the mythic character of Von Dutch was his nearly Zen-like aversion to success, coupled with a love of the bottle — equally legendary. Burns continues: “Despite his genius and popularity, Dutch never made any money from striping. Money was something he detested. In this quote from a 1965 article Dutch explains his thoughts on money.

“I make a point of staying right at the edge of poverty. I don’t have a pair of pants without a hole in them, and the only pair of boots I have are on my feet. I don’t mess around with unnecessary stuff, so I don’t need much money. I believe it’s meant to be that way. There’s a ‘struggle’ you have to go through, and if you make a lot of money it doesn’t make the ‘struggle’ go away. It just makes it more complicated. If you keep poor, the struggle is simple. ” Still, there was a focus on the work — and doing good work, a kind of balance, perhaps, to the other negative characteristics.

Again, Bob Burns — “According to Von Dutch, the flying eyeball originated with the Macedonian and Egyptian cultures about 5000 years ago. It was a symbol meaning “the eye in the sky knows all and sees all”. Von Dutch modified it into the flying eyeball we know of today. He always believed in reincarnation, and the eyeball, somehow, was tied to that. There have been numerous “incarnations” of this design over the years. It still remains an icon of the ’50s and ’60s street rod crowd. Now ya know!”

For the sake of retail presence, here are some images of the Soho retail installation of Von Dutch: 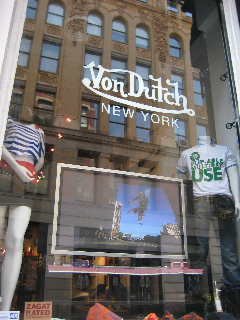 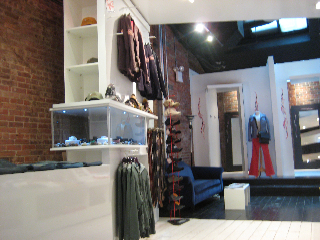 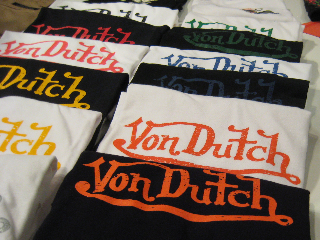 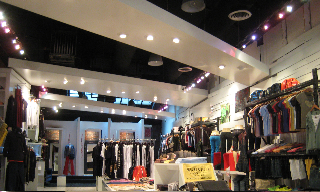 The spirit of Von Dutch’s (and others in the “flamejob” and pinstriping trade) work surely catalyzed the character of these vehicles, for reference: 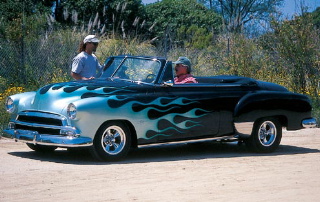 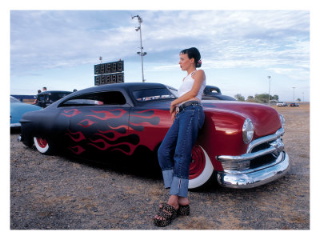 Phil Patton, a design commentator writes: “The daughters, Lisa and Lorna, were happy to sell the rights to reproduce their father’s imagery in 1996 to Michael Cassel, a maker of surf clothing, who established a company called Von Dutch Originals in 1999 and opened the store on Melrose Avenue a year later. He brought in a man named Tonny Sorensen who in turn hired designer Christian Audigier. Audigier worked for Diesel and Fiorucci. Casel’s notion was to tap the hot rod set; but Sorensen and Audigier aimed at wider, fashion audience.

The art world found its way to car culture through artists like Robert Williams, who worked with Ed “Big Daddy” Roth before turning his talents to oil and canvas. In 1993 a show called “Kustom Kulture” at the Laguna Museum of Art helped start off the process of Von Dutch’s discovery by the wider public. Still, it took insight, luck or both to see that Von Dutch could be, well, exploitable. Celebrities such as Britney Spears and Justin Timberlake and Ashton Kutcher showed up wearing the logo caps. The whole appeal of course was explaining who Von Dutch was. By 2003, the company was doing some $33 million in sales and for 2004 may go as high as $100 million.”

Who was Von Dutch? Who is Don Ed Hardy?

What I’m looking for are stories — true stories. And the stories of Don Ed Hardy and Von Dutch are an interesting mix — one that exists in the present era; and another that captures a kind of wild and crazy semblance of the past — a person — and ultimately the telling of the story that remains. Both are true, both have a certain character — the febrile art fullness, the passion for the work, the exploration. And they both have the connection of being built on Audigier’s bridging insight, expanded globally. 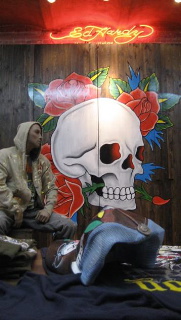 What’s your take, what story do you relate to?

My friend Dawn Clark, AIA LEED®AP, Principal at NBBJ | Design -- sent along this story; digging in, I've found more. I've written a lot about patterning. Actually, I'm captivated by it. Patterning as a kind of subtle substrate brand messaging, patterning in interiors, brand patterning in place making. And how that patterning might be…

Sometime back, after some midtown meetings, I'd been making my way back to the NYC Girvin office. And I came across this treatment for Chipotle, a McDonald's concept investment. But the point is hardly about the opening collaboration in ownership (founded by Steve Ellis, 1993) - their transitional evolution and divestment - but more about…