The Whorl Stone — the Rock That Turns 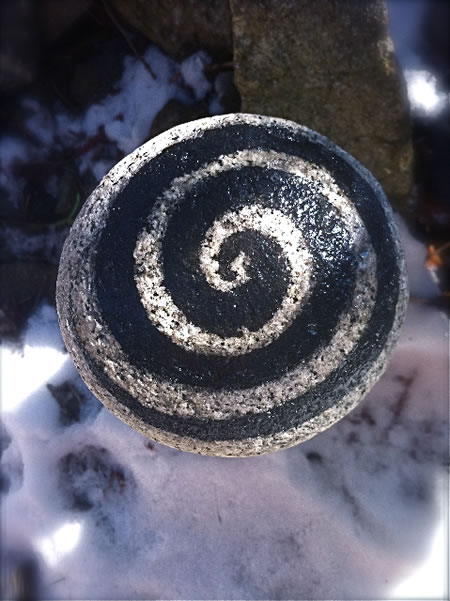 THE STONE THAT TURNS
AND TURNS AGAIN.

When a map becomes clear, there’s a path that could be drawn. It might not be for all to see. Others might see it, take those fragile steps into the unknown — and some: never again venture into the risk of the unseen, the unspooled, the whirl of wowness.

There is one sphere, made from crystals and ice and sand from millions of years back.

I’d found it, out on a sun and wave washed beach, with a collection of other stones that — each and every one — told a story about their millions of years, that they’ve been around. All glisten brilliantly, as they look up, out of the water, inviting you to see them. Many shaped, many colored, their mineral genetics tell all. Flat, or fat. Or square, or smoothed rectangle, or ovoid oblong. Or whatever they might be — they are maps unto themselves — their story of shape and form takes them back to their beginnings and narrates that telling in the molecular cartography of their making. .

White granite, it’s such a simple stone, yet, according to some — the stone finders and geologists, they tell a more complicated and coded storytelling; their own words, it goes something like this:

Granites usually have a medium- to coarse-grained texture. Occasionally some individual crystals (phenocrysts) are larger than the groundmass, in which case the texture is known as porphyritic.

A granitic rock with a porphyritic texture is sometimes known as a porphyry.

Granites can be pink to gray in color, depending on their chemistry and mineralogy. By definition, granite has a color index (the percentage of the rock made up of dark minerals) of less than 25%.

Outcrops of granite tend to form tors and rounded massifs. Granites sometimes occur in circular depressions surrounded by a range of hills, formed by the metamorphic aureole or hornfels.

Granite is usually found in the continental plates of the Earth’s crust.

Granite is nearly always massive (lacking internal structures), hard and tough, and therefore it has gained widespread use as a construction stone.

The word granite comes from the Latin granum, a grain, in reference to the coarse-grained structure of such a crystalline rock.

I’m always surprised when people introduce me to the language of their world. Talking to a geologist, he was telling me things — using words that I’d not heard ever — especially about the granite. Hearing them, I was taken to two places — the center of the earth. And the stoned age of the primaeval human.

In a way — one, the center: it’s layers of compressed and hardened stories, compacted in billions of years. The language is old. Diamonds come from this world.

And in the other way — it’s two, the world where the whorled are present. Stones, rightly arranged, mean something. A pile of stones leads the way. And the bloom of mystery finds color on everything — since, it all is just that.

Finding this stone, I drew that map, that takes me back to that other time — when a mark meant something more than merely a marking; and the turning of that spiral might take you to the center of the earth, the dream tide, now just turning.

A whorl on stone — a labyrinth, which is the telling of where it’s been, and how you might go there yourself, back to your hardened beginnings, when you were just opening up the world. By gathering this symbolic forms around you — even just this: stones — there might be an imagining of where you came from, the metaphor of your own journey, washed in wave, riddled by the grains of sanded time, blessings and torment and how you might come to a moment of quiet — after all that, which is a poetic unfurling of the fabric of your being.

––––
Exploring the finding of stones
what do they mean?
And, in that questioning, their rightful disposition | http://tim.girvin.com/Entries/?p=320

WHICH WAY, GO YOU? THE TURNING PATH THE PATH THAT TURNS, AND TURNS AGAIN. EVERY TIME, BACK TO A PLACE. SNOW IS FALLING. A DEEPER COLD EMERGES. And, in the blinding snow, the sun is so bright that the trees are lit from beneath, it’s a brilliant day. Light filled. Out in the middle of…

Night is drawing nigh, drawing at night

Working at Night — Night is Drawing Nigh Working at night, working at candlelight. Seeing by fire. Some nights back, as I was on the farther shore, waiting for the night boat to come crossing, I was drawing in the dark, with light. Dawn was shooting these images, with the full moon behind, and the…
We use cookies on our website to give you the best experience on our website. By clicking “Accept”, you consent to the use of ALL the cookies.
Do not sell my personal information.
Cookie SettingsAccept
Manage consent