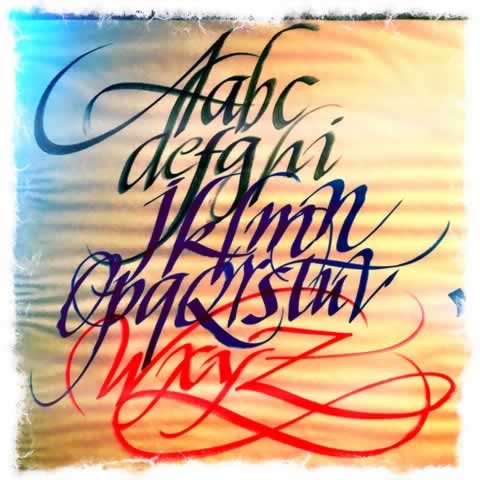 CONCEPTIONS OF ITINERANT LEARNING—EXPLORING THE “GO THERE, GET OUT OF HERE” MODELING OF EDUCATION.

“YOU COULD LEARN MORE IF YOU ACTUALLY WENT THERE.”

I was talking to an LA team on my traveling, vagrant-based approach to learning—leaning-in to learn by going remote, going there and getting out of here.

Then I gave a professional presentation on itinerant learning—“not all that wander are lost.”

Then, working in Hollywood, talking at Universal Studios, I drew everyone’s name in a varying style and told the story of the history of each script, which—really, for me—came from that journeying, learning exploration. And I talked that story, with each, at FocusFeatures.

This conversation built on our storytelling of calligraphy, the lettering legacy of GIRVIN and went to Lloyd Reynolds and my camping-out at his house, hanging at Reed College.

I was then, at Reed, and later at Cooper Union, a ghost student.

A week later, we were talking about another history—GIRVIN’s tech legacy, which led to and followed long after, Steve Jobs—and in discussing the one, it led to the other and the fact that they were actually intertwined.

“why are you always writing about Steve Jobs,

The connection goes back to Stanford. And the Stanford Conference on Design. Back then, I would go to these yearly summits with designer buddies Michael Cronan, Michael Vanderbyl, Michael Manwaring and should’ve been—Michael Schwab. He was one of the “Michaels” of San Francisco, but he never went with us. Nonetheless, I had a connection with him too. My opening link to San Francisco was working as a designer with John Casado, then others, consulting and mostly plying work in type design, calligraphy, illustration and graphics—it was an initiation into the connection with designers all over the world—as a letterman, font designer, calligrapher.

But calligraphy, during that time (the 70s) calligraphy was a crafty thing, kind of an “old lady or spinster art”— the concept of the wilder shores of possible calligraphic futures wasn’t known. In the beginnings, I was alone in San Francisco, Dallas, Chicago, NYC and London—then, in several years of time, there were “calligraphers and letterers” in every city that I was working in—some claimed that they could each do “TimGirvin.” Never mind. I was more inclined to think of calligraphy as an illustrative means to an end in approaching the illustration of language. Energizing ideas in aligned letter-formed and customized expression—the hand reaches out. 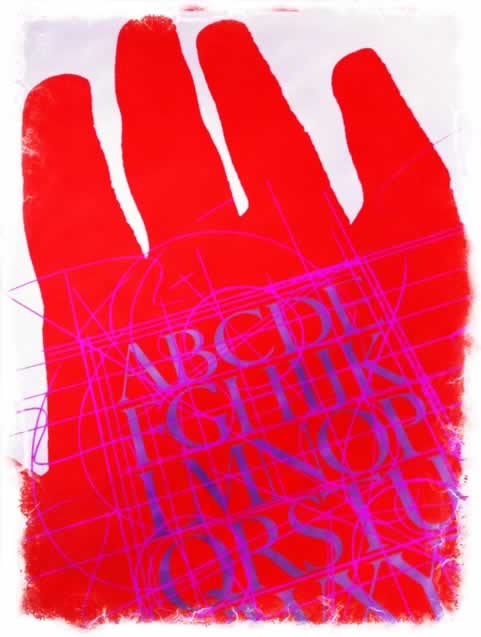 Most people hadn’t a clue about what calligraphy actually was. But there were outposts. In writing a series of pieces about Steve Jobs, Apple and iPad, I continued to reference the link to Jobs that Girvin’s has had over the past decades. It was at Stanford that I met Jobs — he spoke at the conference as a kind of on-fire anarchist; and I reached out to him. From there, he brought me to work as a designer for Apple, working on Macintosh. Then other projects…year on year.

Steve had referenced his time at Reed College, and while a student at The Evergreen State College, a school that’s founded on creating highly personalized programs, I’d met, and worked with, studied with and hung out with—as a kind of protegé—Lloyd Reynolds, a professor of English literature–and as well, the master innovator of newly “re-introducing” calligraphy into an arts curricula at Reed College, as well as “italic handwriting.” My journey into calligraphy, fine print, design, letterpress, the history of art and architecture, sign writing—exploring the integrations of culture and design, the shaping of content, was about going to the place of the maker. And Lloyd was one of them, a master maker—traveling there, staying with him, hanging out on campus. I’d drive my red (Ruby) truck down there to Reed College, in Portland, Oregon and spend time exploring. She looked, as a 1959 Dodge Flathead 6, like this: 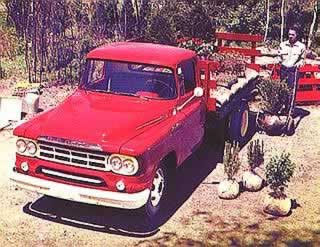 And that exploration ranged from working live on calligraphic studies, to press work, type design and ranging the extraordinary array of his library, a truly incredible collection of books on all of the above. Lloyd’s real character, however, lay not only in the idea of teaching calligraphy as a skillful principle, but as well a complex cross disciplinary approach to art theory, æsthetics, architecture and place-making, the historical context and intertwinements of art and architectural, along with poetry, world culture and religions, mythic patterning and literature. Working with Lloyd was an extraordinary experience. And these lines from Steve exemplify that legacy and profound influence he had on me. And on Steve Jobs. Note the highlights, below.

“The first story is about connecting the dots.

I dropped out of Reed College after the first 6 months, but then stayed around as a drop-in for another 18 months or so before I really quit. So why did I drop out?

It started before I was born. My biological mother was a young, unwed college graduate student, and she decided to put me up for adoption. She felt very strongly that I should be adopted by college graduates, so everything was all set for me to be adopted at birth by a lawyer and his wife. Except that when I popped out they decided at the last minute that they really wanted a girl. So my parents, who were on a waiting list, got a call in the middle of the night asking: “We have an unexpected baby boy; do you want him?” They said: “Of course.” My biological mother later found out that my mother had never graduated from college and that my father had never graduated from high school. She refused to sign the final adoption papers. She only relented a few months later when my parents promised that I would someday go to college.

And 17 years later I did go to college. But I naively chose a college that was almost as expensive as Stanford, and all of my working-class parents’ savings were being spent on my college tuition. After six months, I couldn’t see the value in it. I had no idea what I wanted to do with my life and no idea how college was going to help me figure it out. And here I was spending all of the money my parents had saved their entire life. So I decided to drop out and trust that it would all work out OK. It was pretty scary at the time, but looking back it was one of the best decisions I ever made. The minute I dropped out I could stop taking the required classes that didn’t interest me, and begin dropping in on the ones that looked interesting.

It wasn’t all romantic. I didn’t have a dorm room, so I slept on the floor in friends’ rooms, I returned coke bottles for the 5¢ deposits to buy food with, and I would walk the 7 miles across town every Sunday night to get one good meal a week at the Hare Krishna temple. I loved it. And much of what I stumbled into by following my curiosity and intuition turned out to be priceless later on. Let me give you one example:

Reed College at that time offered perhaps the best calligraphy instruction in the country. Throughout the campus every poster, every label on every drawer, was beautifully hand calligraphed. Because I had dropped out and didn’t have to take the normal classes, I decided to take a calligraphy class to learn how to do this. I learned about serif and san serif typefaces, about varying the amount of space between different letter combinations, about what makes great typography great. It was beautiful, historical, artistically subtle in a way that science can’t capture, and I found it fascinating.

None of this had even a hope of any practical application in my life. But ten years later, when we were designing the first Macintosh computer, it all came back to me. And we designed it all into the Mac. It was the first computer with beautiful typography. If I had never dropped in on that single course in college, the Mac would have never had multiple typefaces or proportionally spaced fonts. And since Windows just copied the Mac, its likely that no personal computer would have them. If I had never dropped out, I would have never dropped in on this calligraphy class, and personal computers might not have the wonderful typography that they do. Of course it was impossible to connect the dots looking forward when I was in college. But it was very, very clear looking backwards ten years later.

Again, you can’t connect the dots looking forward; you can only connect them looking backwards. So you have to trust that the dots will somehow connect in your future. You have to trust in something — your gut, destiny, life, karma, whatever. This approach has never let me down, and it has made all the difference in my life.”

That is where it all began. And still, the connection, to this day. The legacy that Steve refers to is powerful. The dots, the red thread, the song that goes straight to the heart can be something that’s never forgotten—if, importantly, the dots are contemplatively aligned—that the string is held, embraced, and found. 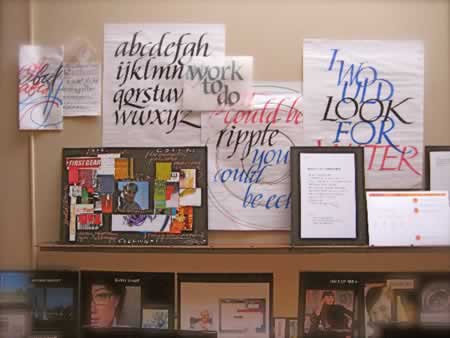 Meeting at the office, working with a Girvin team in exploring the nature of the alphabet—the calligraphy of the Italian Renaissance—the forms move back in time—from the present, to decades back, teaching in college.

That exemplar below is still dated: 1975. 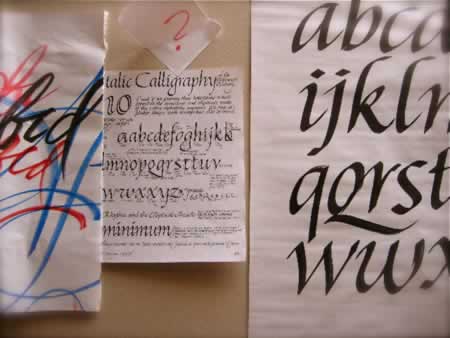 Finally, to hundreds of years back, the fluent penmanship in offering fleet missives of the chancery—that cursive style that represents the penultimate flourish in a millennium and a half of evolution. 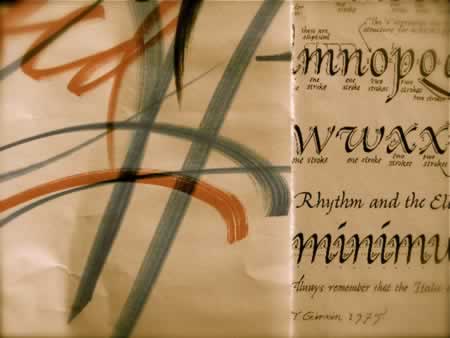 GIRVIN | MEDITATIONS ON
APPLE INNOVATION: THE LEGACY OF STEVE JOBS
& APPLE BRANDING [+GIRVIN]
DESIGNING IMAGINATION : AND THE TOOLS TO MAKE IT HAPPEN
goo.gl/akGWR2

WHAT I LEARNED FROM STAN LEE. AND OTHER UPSTART BRANDING LESSONS FROM STEVE JOBS AND THE WACHOWSKI SIBLINGS. Isn’t it so that, in any journey forward, you go back, to find the points where your heart first opened? And in any journey to know, you must go— out there, find those that do and spend…

EXAMINING THE DEEP SPACE OFSOULFUL BRAND STRATEGY. W H A T  I F? You were to think: "really—there’s something deeper, more profound, more magnetically, more soulfully powerful about the enterprise that I’m working on.” There’s more. Really? Perhaps you did ponder that query? You might be thinking of your brand / team / enterprise / collective…
We use cookies to ensure that we give you the best experience on our website. If you continue to use this site we will assume that you are okay with this.Ok