The First Twitter Christmas
What happened? Less shoppers, but more money spent (than last year, surely!). By the running analyses, online, the gathered summary is that the National Retail Federation estimated that 140 million people hit the stores and shopped online over the past four days. That was down about 5 million from last year. The so-called Black Friday, the profitably symbolic kickoff of the holiday season for retailers, drew about 58.9 million people. In terms of shopper count, this was down more than 1 million.

Thanksgiving weekend, over time — has become almost a beacon of success or failure — important marker for retailers, as they battle to offer the biggest discounts to shoppers and, in the process, generate the most buzz. This is a watershed moment, in the progression of the year — a boost of people shopping, quantity and profits — or net capital float, that could potentially save, make, or break the year thus far. This year, many stores opened at midnight on Thursday. CompUSA beat that, opening for three hours Thanksgiving night. And, in kind, shoppers responded by pulling out their wallets.

Scott Krugman, a spokesman for the National Retail Federation, said spending was driven by high-priced technology items such as flat screen TVs. “This year, stores did not disappoint, as deals on high definition televisions and apparel were just too good to pass up, bringing millions of people out of their Thanksgiving cocoons,” said the retail federation president, Tracy Mullin.
According to a survey conducted by BIGresearch, the average spend moved up, people spent an average of $360.15 this year, which was up 18.9 percent from last year.

Visa USA, the credit card group, also reported strong sales in electronics on Friday, along with furniture and home furnishings. Average spending, including gasoline and restaurant purchases, was up 8.7 percent, the company said. 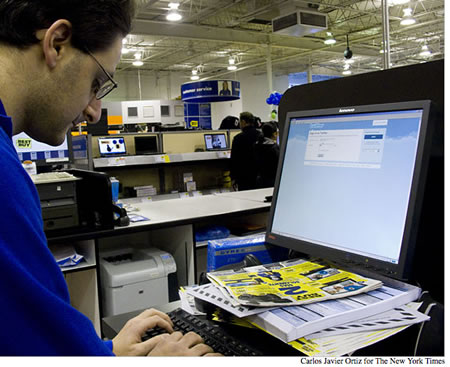 A few months ago, Best Buy began piloting a Twelpforce — a Twitter-inspired play on “help force” — of some 2,500 employees that answer consumers’ questions in real time. 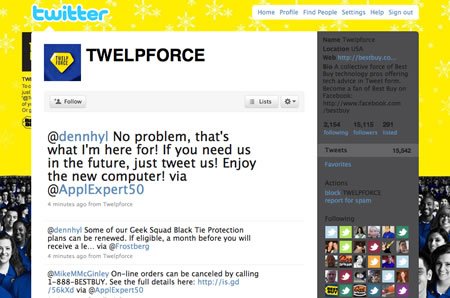 “It’s 24-hour access to our employees,” said Brad Smith, director of interactive marketing and emerging media for Best Buy. The Twelpforce had fielded about 25,000 questions even before gearing up for Thanksgiving weekend.

It’s working — thousands of followers, thousands of tweetsAnd, in the mix of it all, this is the first Twitter Christmas — all across the land — customers and retailers used the social networking site — to talk about just what was happening: shopping strategies, bargains, great shopping experiences and melee.

The key to Twitter is the reflective nature of the offering — multiplied by millions; so shoppers that are trying to find a place to park, repair some challenge, or broadcast simple haiku can spread the word; and it goes both ways, good and bad — and packs a punch of enormous prowess. Also, good, or bad. To that resourceful expansion, the big retailers are scrambling to build on that planning — designating tech-savvy teams to respond to posts and defining the stacks of merchandise — what’s happening, down the last pair of socks.

Greg Ahearn, senior vice president of marketing and e-commerce for Toys “R” Us offers that Twitter is “one of the greatest emerging communication channels out there. This is a way people can stay connected with the brand in a way they’ve never been able to before.” Black Friday twitter nations have been, Barney’s, Bloomingdale’s, Best Buy, Gap, J.C.Penney, Staples and Toys “R” Us. And the tool is a spectacular burst — by “following” a retailer, customers can assess messages that could offer marvelous shopping insights — where the deals are — and the retailer has an audience at ready hand for promulgation. This year, the power of this messaging tool could be life-saving. Retweets send the message, replies allow communications, messaging the broadcast in a torrent.

James Fielding, president of Disney Stores Worldwide, who sends messages under the Twitter handle, DisneyStorePrez, focuses on a crossover strategy — one, to Facebook, two, to Twitter; they bridge and cross-pollinate. Like: “We have amazing ONE DAY ONLY deals previewing on our Facebook page — become a fan today and find out more!”

Where’s it going? Guesses are retail sales during November and December to grow at a modest 5 percent compared to last year, reaching $457.4 billion. Who’s done with their shopping? Consumers reported having completed about 35 percent of their holiday shopping, according to the BIGresearch survey. Just less than 9 percent said they were finished.

More to come. What’s your haiku, spreading the word? Shop online, that might be better.

Girvin | Strategic Branding Research: Brand, personality, testing and global marketing initiatives What is the line that moves to the psychic space of a person? How do you find the heart of a relationship? Brand to person? Person as brand to community? During the course of Girvin's strategic design and consulting practice, over the passage…

Engaging leadership brand champions: studying the patterning of innovation, the struggle of the paradigm and the modeling of breaking brands free. As a business person, a planner, and a student of enterprise internationally, working on the edge of innovation, I've been -- we've been -- exposed to some extraordinary people, ideas, teams and concepts. That…
We use cookies on our website to give you the best experience on our website. By clicking “Accept”, you consent to the use of ALL the cookies.
Do not sell my personal information.
Cookie SettingsAccept
Manage consent