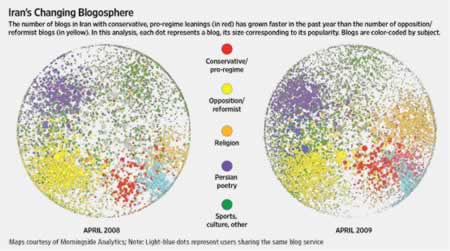 Twitterstory as the last line of defense, offensively.

Twitter is a storytelling tool. Every person tells a micro-story in the 140 characters of text that are tied to the messaging output from many tiers of devices. To the brand, the personal brand, the legacy of the story reaches out — and sometimes offers insights into emerging commentary that creates visual patterning of analysis. Like the above, or in other notes that we’ve blogged. It’s been oft reflected that the power of Obama’s campaign related to his knowledge of emerging community building technology and social network tools – a story told, has only a certain number of routes to spread; who, and how, are they promulgated? We see Tableau as a path to reckoning visualizations of data-spread — and there’s a story there for us, as well.

There’s an interesting flow that’s happened in Iran, as well, to the notions of play — regime against regime, that’s compelling additions to the character of messaging and storytelling. Twitterstory, and blog, that is. In reaching to friends there, watching Facebook, many choose to adorn their pages with political positioning, standards and personal brand commitments. Their photo imagery has gone from smiling faces of Iranians, to shots of banners, party logos and slogans. To the revolutionary hopes of change, however, the twittertool comes back from the counter-revolutionary front as well. According to the Wall Street Journal, “Supporters of Iran’s regime are taking a cue from the opposition’s strategy: They’re mounting an online offensive.

Thousands of Iranians used social-networking sites and blogs after Iran’s election last month to criticize the government and spread news of its violent clashes with protesters.

But over the past week, a growing number of Iranian users of Twitter — the online service that allows users to send short messages — have been “tweeting” in favor of the regime, according to Internet security experts and others studying the development.”

The salient point is that while many have seen, and has been noted, that the power of Twittering can ring true, to the call of freedom, it too can lend itself to another form of incendiary action — that the Iranian government, using the tools of the twittering trade, to gather up, build sites that deliberately set up actions for “spies” to offer names, numbers and addresses of twitterers, bloggers and Facebook users.

Interestingly enough, given the power of the tool to evince change in the cloud of crowds, it was curious that Biz Stone, co-founder of Twitter, declined to comment.

All the power of the political furies was subsumed, shortly thereafter, by another form of incursion: the passing of Michael Jackson.

Twitterstory. Truth be told, ever story is.

Girvin | Movement: examining place, foundation and the archaeology of brand experience Girvin is moving, after a couple of decades in the same place

Kajeet | use it, share it, network it: for good

Exploring social networking tools in building sharing communities: blogging and direct selling relationships. We worked with Kajeet's founder, Daniel Neal, to build out the opening of a brand proposition for a children's mobile phone technology a couple of years back. The real point to the work comes down to simple stuff, that wraps around amazingly…
We use cookies on our website to give you the best experience on our website. By clicking “Accept”, you consent to the use of ALL the cookies.
Do not sell my personal information.
Cookie SettingsAccept
Manage consent