The heart and soul of Crows, People, Cityscape and Poetry:
Tokyo Waka | A film

The Kaw-Call of the Crow | Tokyo.

Who couldn’t forget this call?

The character of Waka might relate more to the idea of Tanka, the classically “short” poem — a major literary thread in the genres of Japanese literature. And this film is lucidly poetic — an engaging and beautiful string of short poems and meditations on the intertwinement of humans, nature and the city — as well as the long running legacy
of the Japanese and their connection with karasu — crows.

In speaking with filmmaker Ms. Samuelson, a newly retired Professor at Stanford University, The Department of Art and Art History, at an event Russ and Gemma Daggatt’s “Work/Play/Art” space, the north end of Lake Union, a screening that I was invited to by friend John Kucher — she talked about the intimacy of her experiences in Tokyo — working there, learning Japanese and being inspired in the inter-mixing and layering of stories in experiences in her poetic “documentary” on these curious birds, the people of Tokyo, and the heritage of the city — ever-growing, constantly changing — tearing down and building up — a cycling of change and replacement.

Here, the screening at the Daggatt’s south-facing studio windows shows the reflected projection, and beyond, the left, the Aurora bridge looming in the sodium vapored light, across the marina yard. 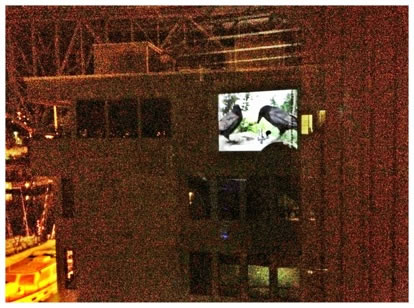 I thought that Waka might be geseigo — the Japanese word that describes a category of word sound — that could be, on one hand, the idea a “thing” that doesn’t make sounds, but can be described in a sound, or the character of noise made by noise-making entities — like cats [nyan-nyan], dogs [wan-wan] and guns [banban].

The Ambient Noises of Tokyo
There is one underlying, chattering, deep-voiced, graveled and warbling intonation — a throaty and raspy note that happens in the skies of Tokyo; it resonates in the parks, the Boulevards, the old alleyways, temple grounds and forests — it is a resonating call of the of the Japanese Corvus macrorhynchos — the great black “jungle crow” — long-living, large-brained, and one of the smartest birds in the planet. 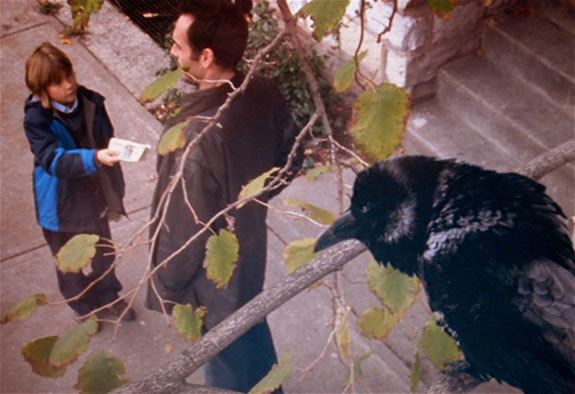 There are, however, very few large cities where you find “large-billed,” or “jungle crows” as you might encounter in Tokyo [these are big birds, seen as troublesome and pest-like,] yet in some instances, spiritual symbols of the principles of “mono no aware” — the fleeting impermanence of things, and the sensitivity to empathic, even wistful meditation on the lessons of nature.

To visualize size, these birds are more to the scale of small raptors — a hulking grandfather of the Asian Corvid class. In Tokyo, crows are more common here, almost than other birds.

Still, the Corvids are a global bird — in cities, I’ve seen them picking away in Ulaan Baatar, Mongolia, and in Istanbul, Turkey [hooded] skulking around the great mosques of the Sultanahmet — the trees and groves of Hagia Sophia; and the water-coursed way to the Blue Mosque, a longbow’s arrow shot down the array of fountains.
And Delhi [Corvus culminatus] — where an urban conflagration of scavenger and raptor birds abound. 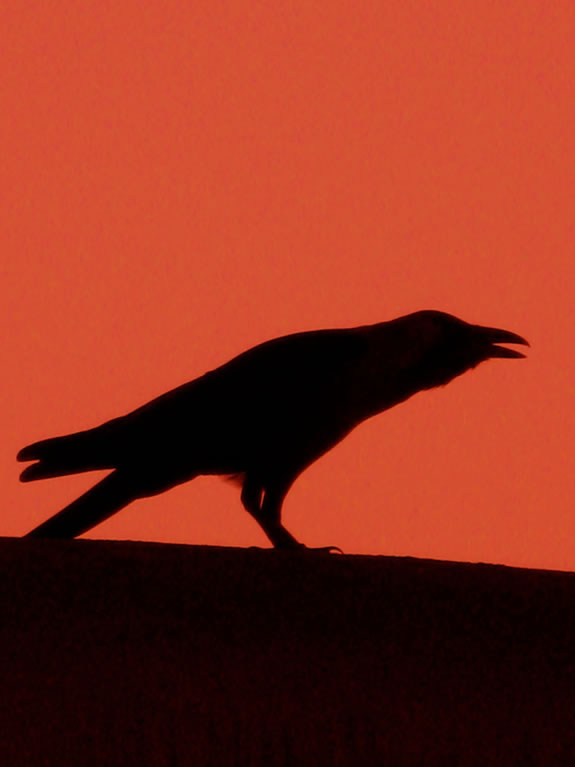 Too — Paro, Bhutan, where the Raven [also a corvid] is the national bird, is a much more common sighting. 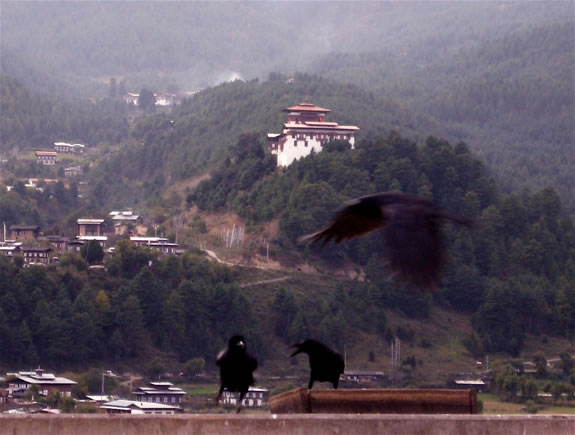 The plaintive call, to me, is an unforgettable beckoning to that distant city [or other misted dens, alleyways and forgotten dimly-lit streets in other ancient cities — and it takes me back to strangely intimate moments with the Corvids — impossibly rainbow-oiled black and riveting with the eyes of very intelligent birds.

Once, at a sophisticated Ginza Gallery, literally called GGG — I was there, giving a talk; and afterwards, felt conspicuously pompous in the quality of the event — arrogantly and foolishly self-important.
On the sidewalk, outside, I felt like I was being watched.

And a wild, limb-snapping, jostling waggle of a branch revealed a monstrously large Tokyo Asian Crow, the so-called “jungle crow,” sitting there, mere feet away, looking at me, impossible blackness against the brilliantly luminous green of gingko tree leaves — and he seemed to be saying —
“like, what’cha looking at, buddy? —
think yer special, well… 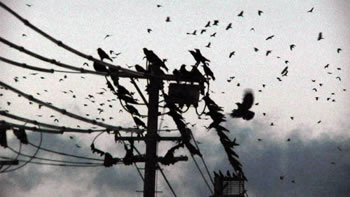 Think again, and
wake up to
what’s right here.

All ways, a re-minding.
Tokyo, Raven-like crows, a love affair.

Meeting M I L L A Market Restaurant | Paris THE STREAM FLOWS -- BUT WHICH WAY, THE CURRENT? I was thinking about the idea of current flow -- watching leaves in a river, idling -- breeze and river flow moving the leaves along. And in that state, what is their turning -- know they,…

The Genius of Invention, the Infection of Enthusiasm Weeks later, I've been thinking. I was shocked to read about Tony Scott's passage, in the manner of his so-called choosing -- and more critically, not knowing the truth in, about, any of it. Who does, who will: know? The [this, our] life is a maze --…
We use cookies on our website to give you the best experience on our website. By clicking “Accept”, you consent to the use of ALL the cookies.
Do not sell my personal information.
Cookie SettingsAccept
Manage consent