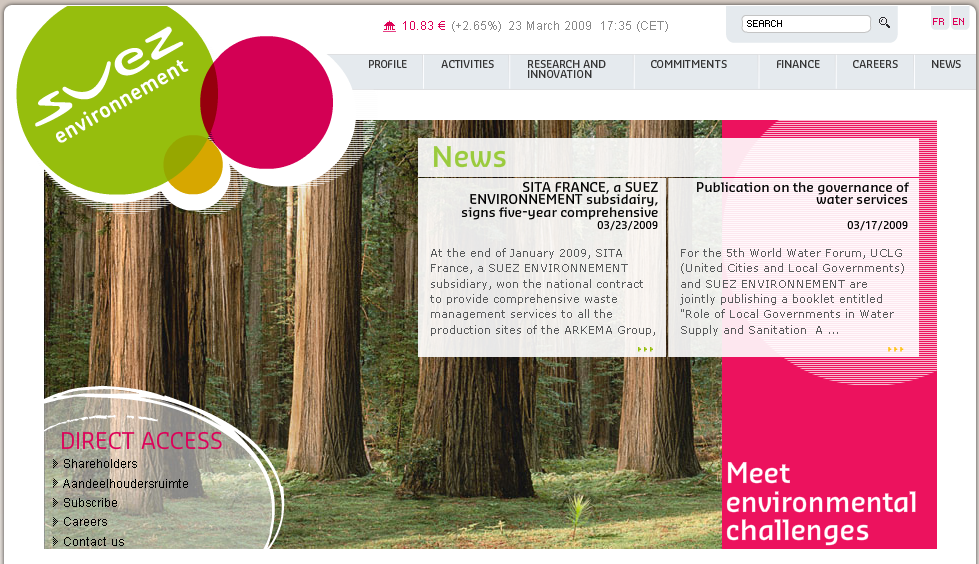 When I was working in Paris, I came in contact, as a consultant, with an intriguing group: Suez. Interestingly enough, this group was founded on the building of the Suez Canal — this 19th century French group of visionaries, contractors and investors built the canal, then moved on to focus on a variety of other efforts — some, questionable, others, noteworthy. But the Canal — or the waterway — has some history, extending back four thousand years. And in fact, other canals were created by the Egyptians that were partially uncovered in the early 19th century.

My work with Suez was more about brand strategy and the implementation of a strategy that ran alongside the character of their business developmental position, which has been incessantly evolving since its foundation in 1822 (one of the longest-running multinational organizations in the world) — and focused on the brand. Since that time, it merged with yet another ancient brand, Gas de France — and became GDF|Suez.

The intriguing component of the enterprise for me, which might be seen as the potentially questionable one, was the Suez strategy for water “development” — which really came down to water control. That is — building the infrastructural systems to create water, for potentially disadvantaged water communities around the world, and then to charge for the distribution of the water. As well, in these strategic reviews, it was also presumed to explore other benefits of getting water from one place to another. So water, being trucked, in a way became (and perhaps truly is) more valuable than fuel. As well, to an inverse paradox, water becomes more valuable than gold, in the desert — or places where there is no water. And this conversation continues to gain credence — water is life, life is water — and surely there’s a positioning in commerce embedded there. My question was — “who really owns the water here?”

There has been a great deal of discussion, of late, about the challenges of water, water rights and clean water — and I couldn’t hope to consider tackling it, with any of the adroit scholarship of so many others impassioned with the state of water on the planet. And, with the notions of clean water comes bottled water — and the continuously growing craze for them. Let alone that they’ve been nearly banned in Seattle, the mere concept of bottled water is a hazard for the planet.

What to do about it? Drink from a tap.

Then there’s this, forwarded to me by a friend, Joanne Warfield — artist, photographer, producer and life aesthete: http://boxedwaterisbetter.com

“[We] started with the simple idea of creating a new bottled water brand that is kinder to the environment and gives back a bit. We found that water shouldn’t be bottled at all, but instead, boxed. So we looked to the past for inspiration in the century old beverage container and decided to keep things simple, sustainable and beautiful.

“About 90% of the Boxed Water container is made from a renewable resource, trees, that when harvested in a responsible, managed and ethical way serve as an amazing renewable resource that benefits the environment even as it’s renewed. Our carbon footprint is dramatically lower because our boxes are shipped flat to our filler and filled only as demand is created, as opposed to most bottled water companies that ship their empty bottles across the globe to be filled, then ship them back for consumption. The flat, unfilled boxes can fit on 2 pallets, or roughly 5% of a truckload. Empty plastic of glass bottles would require about 5 truckloads. Our cartons can also be broken down to their original flat state, are recyclable in most areas and will be recyclable everywhere shortly. We’re also giving 20% of our profits back to the resources our product is composed of — water and trees. Not only does it simply make sense, but we really enjoy supporting water and forestation organizations as it’s part of our company’s ethos and way of thinking to give back and participate. All that and an over-arching focus on simple and beautiful design that complements our brand as well as the spaces it’s sold and consumed in.”

Personally, contrary to the trending dictums of cool packaging design, I’d suggest that drinking from a fountain is the best solution, or using an old canteen, or a Sigg. What about that coming back — your old camping canteen, with the green canvas attachment for your army camping belt? Certainly Thierry Mugler would have a designed take on that front? Nalgene stopped their production of plastic bottles altogether — so for camping, you just might have to.

Personally, I get all the water I need from espresso.

Art Wolfe | Wikipedia imagery file The brand that is a living, loving being. Art Wolfe and I go way back -- decades; but my personal relationship with him goes back further -- into the recesses of my younger years, being in the ramshackle melange otherwise known as REI. Art's imagery used to be shown…

A return to the spirit of store one. I've worked in the Seattle coffee brewing experience for several decades. And all the while, I've been a lover of coffee -- and the coffee sensate experience. There are two favorites for me. One, coffee made, "cowboy style", in Java. There's a density and cinnamon edge to…
We use cookies on our website to give you the best experience on our website. By clicking “Accept”, you consent to the use of ALL the cookies.
Do not sell my personal information.
Cookie SettingsAccept
Manage consent