WD-40 | the brandstory in community ("ah, the perfume of jet fuel in the morning") 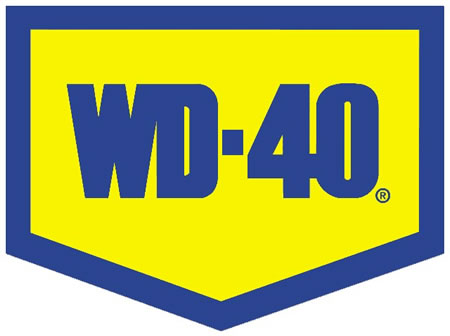 Rockets, lubrication and the innovative force of personality in the leadership of John Barry

Personally, I love the scent. Nothing like jetfuel in the morning.

Someone commented, “why is that you always are smelling things first?”

This is a story that I’ve been sitting on — for more than a year, but it was rekindled by someone asking me, literally, about the concept of a WD-40 scent.

Imagine it — you could smell like a mix between the scent of lubricant and the base note of jet fuel (or actually, rocket ignition) — combine that with leather, some wood notes, sprinkle some spices — a hint of tobacco and you might have the supremely masculine fragrance — from the earthy notes of the primordial cellular composting of carbon: oil, to the lean flammability of rocket engines. Nice, for a man. Intriguing, for a woman?

But there’s a brand story that is as much about the human branding capacity as it is about the spirit of the closely held secrets of a product that seemingly has 2002+ uses — from healing elbow joints to de-rusting the lock piece of antiquity. The brand — the human brand or otherwise — starts with a human: John S. Barry, an executive who ingeniously masterminded the broad promulgation of WD-40 — a petroleum-based lubricant and protectant which was originally designed for rocket applications and the space program — into millions of American households, died a couple of years back, July 3, 2009 La Jolla outside of San Diego at the age of 84.

The story began earlier, in the early innovations that created the offering in the first place: developed in 1953 by Norm Larsen, founder of the Rocket Chemical Company, San Diego, California. The legend goes that WD-40 stands for “Water Displacement – 40th Attempt”. Larsen was attempting to concoct a formula to prevent corrosion, by displacing the standing water that causes it. In the process, he arrived at a successful formula on his 40th attempt.

The first use of WD-40 was applied by the group Convair to solidify the outer skin of the Atlas missile against the corrosive effects of rusting. From there, it became modestly available commercially in the late 50s in San Diego, still the corporate home of the enterprise.

The company website offers that surveys demonstrate that WD-40, the slippery liquid mist in the iconically brilliant blue and yellow aerosol can, can be found in as many as 80 percent of American homes. According to the community modeling of “early social networking” — just the dropped notes of ideas and applications — it has at least 2,000 uses. This sense of brand posse, the self possessed experts on applications of WD-40, is about listening to the community and letting them build the brand ambassadorship. The inventive applications are mostly invented or discovered by WD-40 club members themselves. More, here. 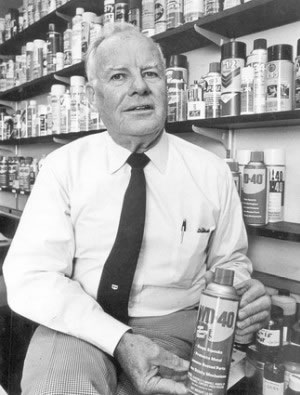 Mr. Barry was not part of the Rocket Chemical Company in 1953, when its staff of three set out to develop a line of rust-prevention solvents and degreasers. But in a manner, his spirit escalated the can-do attitude of the brand. It was only a couple of years after their founding, in 1961, that WD-40 employees came in on a Saturday to produce the first truckload shipment to meet disaster needs of victims of Hurricane Carla on the Gulf Coast. WD-40 — in an opening innovative stretch of application, was used to recondition flood-damaged vehicles.

The enthusiasm for the founding accessibility and utility of the brand supporting the trend that sales continued to increase. With Barry’s arrival as president and chief executive in 1969 that boosted the company to dominance in its aerospace founded, niche market. Looking at appropriate realignment — and the key assets of the brand, he quickly changed the name of Rocket Chemical to the WD-40 Company. 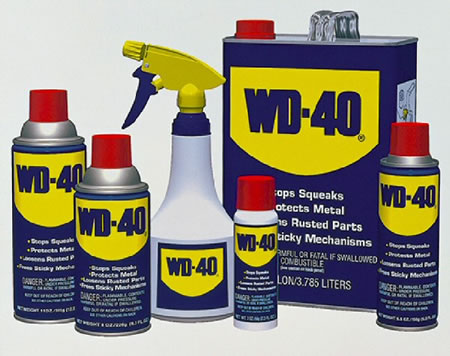 Another asset was the formulation — Mr. Barry was fiercely dedicated to protecting the secret ingredients of WD-40, not to mention its trademarks and distinctive container. On another strategic bent, the company never actually patented WD-40, protecting the nature of the ingredients propriety. But the name caught hold. Competitors held sway — but could never topple the brand character of WD-40. “What they don’t have,” he said, “is the name.”

The thinking marketing tactics that Mr. Barry brought to the brand boosted marketing cohesion and disciplined outcomes in communications to the company. The packaging was tuned, advertising budgets grew and John Barry expanded the distributions. More so, he gathered stories and alignments between the name and doing good — just like the evidence of the opening efforts of post hurricane rehabilitation in the early 60s. That giving –spreading the word — included the 10,000 canisters, the company shipped every month to soldiers in the Vietnam War to keep their weapons dry and smoothly functioning. Relationships like that are not forgotten. Those distributions paid off, growing upwards past 10,000 sales relationships.

Rules set in his strict definition of the power of the brand — when Sears wanted to package WD-40 under its own private label, Mr. Barry said no. Another asked for concessions in pricing — a typical expectation of the global brand — again: no. Supermarkets became another focus — bolstering the handy man, every man, every household strategy. Then, the world. But the story isn’t necessarily about the nature of manufacturing, to appearances — Mr. Barry said to Forbes, “but in fact we are a marketing company.” 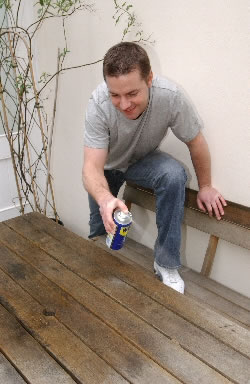 The real key to the evolutions lies in the strategy of building an enthusiastic group of relationships — Mr. Barry’s inherent focus and passion — a veritable diplomatic corps of brand storytelling innovations. Love WD-40, then use it, in a new way, and tell us your story about it.

People’s enthusiasm for sending in ideas for applications using WD-40 mushroomed under Mr. Barry. According to the NYTimes, “the uses included preventing squirrels from climbing into a birdhouse; lubricating tuba valves; cleaning ostrich eggs for craft purposes; and freeing a tongue stuck to cold metal. A bus driver in Asia used WD-40 to remove a python that had coiled itself around the undercarriage of his bus.” 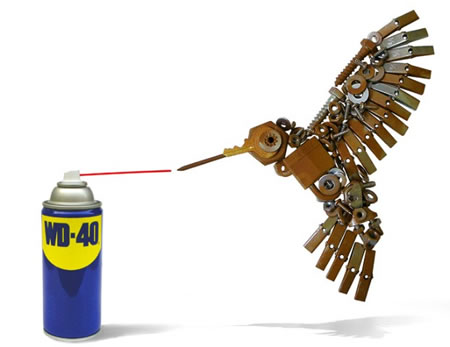 One story becomes another. And another. With iconic imagery, a legacy unfolds. Build community and the ripples spread, and the red thread, at the heart of the brand, spirals outwardly.

TSG | Vancouver, BC
Exploring the ideas of crowdsourcing innovation

The Architecture, the Mind and the Memory: Notes on the Production and Place Design of "Inception."

Smashingshare.com The metaphor of the mind, architectural design and the secret of dreams The Architect from the film Inception (Warner Brothers) From the film: Inception A conversation with the inceptor and the architect Cobb: You create the world of the dream. We bring the subject into that dream and fill it with their subconscious. Ariadne:…

IGNITE THE FUTURE | Theories of innovation, brand, story and influence

Can creativity be defined in a brief? What is a creative brief -- and is there a point to being brief? No. Brands are inordinately complicated orchestrations. Being that they inherently involve relationships to humans, the idea of "briefness" is a less than valuable proposition. Instead, a "brief" should be as interesting as a story,…
We use cookies on our website to give you the best experience on our website. By clicking “Accept”, you consent to the use of ALL the cookies.
Do not sell my personal information.
Cookie SettingsAccept
Manage consent