Who is the Mayor of Mars?

Curiosity, where are you?
Are you the Mayor of Mars? 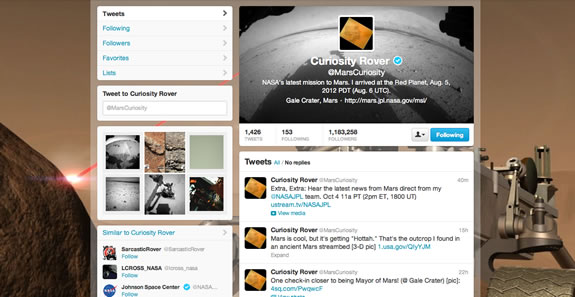 Yes — to the Mayorship.
But to the geo-synchronism of FourSquare,
the point might be journey, story, relevance and place.

The Apex query might be —
where are you now, and, better still, where might you be, in the universe?

You might recall my comments about the Girvin Rare Book Library and Foursquare —
and the jokes about the military Foursquare designations of everything having to do with jets, take offs, gassing and fueling up aircraft at the Whidbey Island Naval Base [Hangar 7 | VAX assembly yard…? what are these places?]

WASHINGTON — NASA’s Curiosity Mars rover checked in on Mars Wednesday using the mobile application Foursquare. This marks the first check-in on another planet. Users on Foursquare can keep up with Curiosity as the rover checks in at key locations and posts photos and tips, all while exploring the Red Planet. “NASA is using Foursquare as a tool to share the rover’s new locations while exploring Mars,” said David Weaver, associate administrator for communications at NASA Headquarters in Washington. “This will help to involve the public with the mission and give them a sense of the rover’s travels through Gale Crater.” After landing in Gale Crater last month, Curiosity began a planned 23-month mission that includes some of Mars’ most intriguing scientific destinations. Curiosity is roving toward Mount Sharp, a mountain about 3 miles (5 kilometers) tall. The rover is conducting experiments along the way, seeking clues in the rocks and soil that would indicate whether Mars ever was capable of supporting microbial life. It is taking and sharing pictures of the trip. Back here on Earth, Foursquare users will be able to earn a Curiosity-themed badge on the social media platform for check-ins at locations that generate an interest in science, technology, engineering and mathematics. Available late this year, this new badge will encourage Foursquare users to explore science centers, laboratories and museums that pique scientific curiosity. NASA has been on Foursquare since 2010 through a strategic partnership with the platform. This partnership, launched with astronaut Doug Wheelock’s first-ever check-in from the International Space Station, has allowed users to connect with NASA and enabled them to explore the universe and re-discover Earth. The partnership launched the NASA Explorer badge for Foursquare users, encouraging them to explore NASA-related locations across the country. It also included the launch of a NASA Foursquare page, where the agency provides official tips and information about the nation’s space program. The Jet Propulsion Laboratory (JPL) manages the Mars Science Laboratory mission and its Curiosity rover for NASA’s Science Mission Directorate in Washington. The rover was designed, developed and assembled at JPL, a division of the California Institute of Technology in Pasadena, Calif. To find out more about

For information about NASA’s partnership with Foursquare, visit:
http://www.nasa.gov/connect/foursquare.html

The perfume of booze: strategy, story, packaging Partnering in Paris, Tokyo and NYC with Pierre Dinand, we talked about -- and worked together on -- the idea of enchanted containment, ideating iconic containers of concretized, luxurious value as being a symbolic, even an archetypal and unforgettable gesture. The bottle can say it all. Pierre Dinand…

How would you improve life in NYC?

Doing good, as a contributor to community, in design -- could be "helping me, helping you." How would you improve life in NYC? How can you help? Anywhere? As a pro bono designer? There's nothing [as it seems to me, these days] as challenging as the balance between the offering of doing good and making…
We use cookies on our website to give you the best experience on our website. By clicking “Accept”, you consent to the use of ALL the cookies.
Do not sell my personal information.
Cookie SettingsAccept
Manage consent