Wi-Fi ubiquity: Starbucks + new digital content. What if Starbucks created its own content for Wi-Fi users? Who cares? 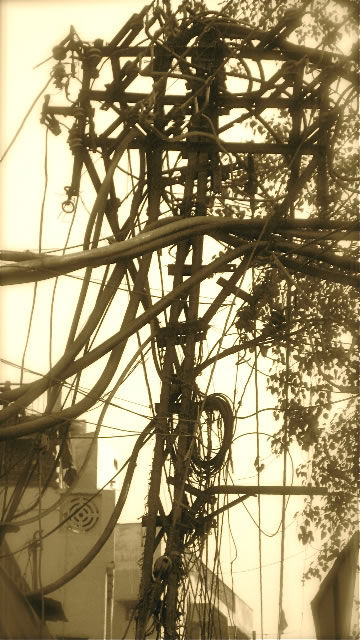 I say: no thanks.

For years (going back a decade) the Cingular, TMobile, Voicestream, AT&T, etc. links into the wireless networks at Starbucks were a necessity of the job. The real problem, finding a plug — to jack in, so you could get some work done. I (then and now) troll the space, looking for the right desk, the right workplace next to the right plug. Airports, too.

By now, I’m expert — I’ll use a drive-by, open my computer, jack into the newly free wifi network, download my mail, drive out, hit the road to deal with it later. And I do have iPhone, but despise dealing with mail on it. That’s only for emergency rationing.

The point is that wi-fi is now becoming something that floats in ubiquity — it really shouldn’t be charged for, anywhere — except that it is, and in those instances, you see the crowds sourcing their content on the floating timbre of another vibration, snagged from some place else.

It’s been noted that in this new realm of digital trolling, gathering content from the rippling waves anywhere, everywhere, that there’s a potential for a story to be told, brand-wise, in the e-market of controlled brand-place, like Starbucks. That is, go there, jack in for free – but sign in at the portal before you are launched into the working space that’s free for you to chose. Can they keep you there.

In studying the evolution of the Starbucks bridge, which used to be a place to bypass the acknowledgement of signature for AT&T, it’s not a place to dawdle, except for the bored. 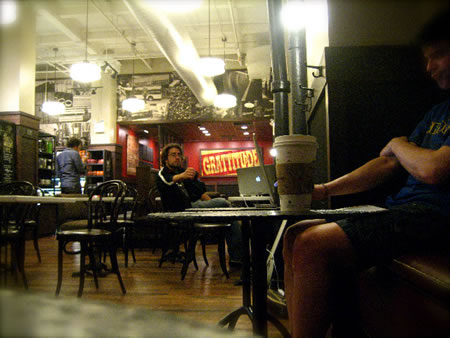 Dial in, speaking of location-less locations. 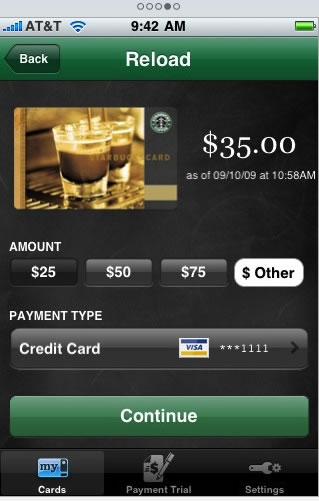 How does a corporate storytelling emerge from the bridge of an owned brand place / space (the retail environment) that then extends the messaging to other places of connection? There’s the retail storytelling environment, then the digital realm that (could) go along with it. That’s a potential — but do the relationships, the carrying from one place to another — really work, that’s my question; if I’m there, in a place, would I consider that this would be the place that I’d want to browse content? That’s a question — it’s like working at Disney or Paramount, and constantly listening to a dithering stream of, well, Disney or Viacom / Paramount content — movies, singsongs, commericals, tv show theatrics that I might not really care about, even though these are my clients. Some comments, to explore that end — the idea of a digital place for Starbuckians, in Starbucks. If there’s a deal to be had, then ever present coupon-clippers galore, they just might dig in. Personally, I’d pass. 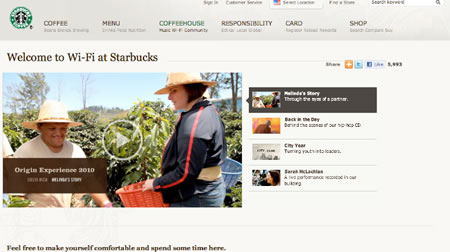 References, “Starbucks appeals to well-heeled adults, and there’s a tremendous opportunity to get them to reach into their pocketbooks,” offered Laura DiDio, principal at Information Technology Intelligence Corp., a technology research and consulting firm in Grafton, Mass. One of the key drivers will be cost, that is: if you’re in Starbucks, and you see something online that you like, you can buy it for less, right here and now. “If Starbucks doesn’t sell audio, video and casual game products via their digital network, they’re silly,” said Chris Brogan, president of New Marketing Labs in Boston. “Digital, done well, is powerful. Starbucks gets to add a brand allegiance to the mix, by saying, ‘If you’re buying this while in a Starbucks, the price is X.’” Starbucks didn’t offer any new details on its digital network, saying it would reveal more information closer to the launch. Starbucks Chief Information Officer Stephen Gillett, the founder of Starbuck’s Digital Ventures unit, wrote (image below) on his blog that he expects the network to include “the best paid-wall content on the internet but available ad-free and at no cost to our customers.” 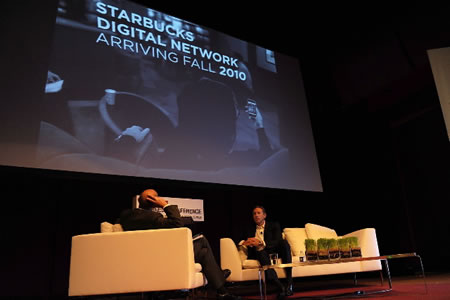 As I’d noted above, that’s my worry — about going anywhere and being jacked into controlled content. Augie Ray, an analyst for Forrester Research suggests that Starbucks has to create compelling features or offers to grab people on the Wi-Fi network — otherwise people will just leave the Starbucks landing page and click to other sites.“The onus is on Starbucks to capture people and not just be something they pass through on the way to checking their email or visiting Facebook,” he offers. It’s pretty clear that the relationships are percolating. 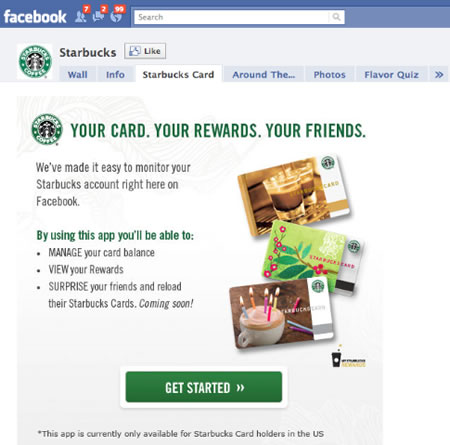 And really, it is get started — link in to Starbucks, for the card then Facebook.

The spirit of the social media, the storytelling, is about the community of sharing — one story, another told. That works, digital place / retail place / brand bridge place — that fluently aligns them all. But there’s a difference to the idea of brand environment and the idea that being there — being in that place, means that you’ll be captivated to look at the selling of that brand in that digital bridge environment.

Check out that number — beats Coca Cola, for friends “like.” 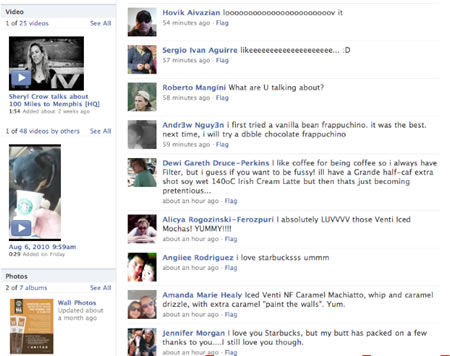 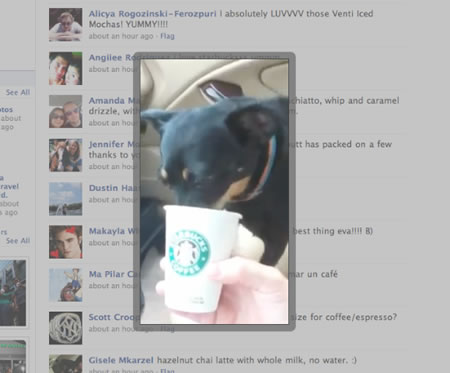 Starbucks, the explorer of social media has climbed to the top rating of big consumer brands and links to consumer relationships — Facebook and otherwise. Truth be told, there are people that care, (12 million + by now) that love the story, and tell their own. 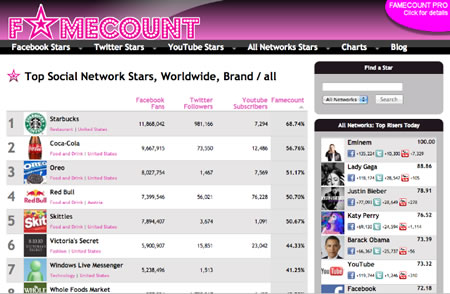 The challenge though, is in creating a special place, the third, the fourth, or the fifth place of brand connection, is the content an expansion of experience in understanding emotional connections and relationship, or it is more to the nature of selected cool stuff, from other places. If it’s worth it, that’s where I’d live — in their brand place — if I was engaged. That will be a tough slot to beat.

Brand, story, positioning and strategy, what's working here? I was struck by Steve Ballmer's presentation of the Slate technology at the Microsoft WWDC and the profound difference in positioning that the two brands represent -- and by two, you know which two I mean. There are, too, two human brands at the helm, and for…

DRIVING, AND SHOOTING, IN A JOURNEY OF 4 HOURS. SPONTANEITY AND IMAGERY. I SPEND A LOT OF TIME LOOKING AT PHOTOGRAPHY -- AND I WRITE ABOUT IT, DESIGN AROUND IT, SHOOT IT. AND I PACKAGE AND DESIGN OTHER PHOTOGRAPHER'S WORK. DOING THAT, GIVES ONE A RESPECT FOR THE REAL ASPIRATIONS OF PHOTOGRAPHERS. What are they…
We use cookies on our website to give you the best experience on our website. By clicking “Accept”, you consent to the use of ALL the cookies.
Do not sell my personal information.
Cookie SettingsAccept
Manage consent