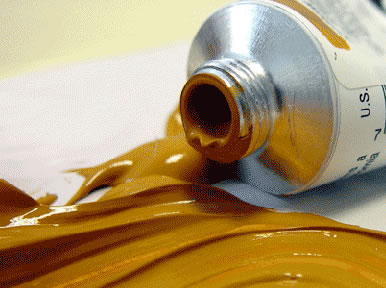 Explorations on color, meaning and experience. And Michelle.

Surely I can’t offer an presentment on the concept of the implication of color , the symbolism, let alone the depth of experience that exists in the trade on color trending — and the shifts, year to year, that captivate the market. Or anything other than personal reflections on what the color yellow might represent in the making of place.
There’s plenty of content out there on that front, by experts far greater than I. 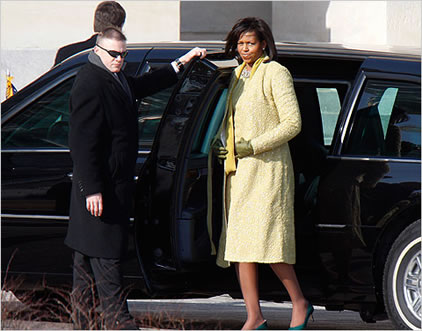 Photo: Ruth Fremson/The New York Times
But Michelle, as she’ll be known from this point outwards, the First Lady, has brought the concept of optimism in presentation to a new front.
But what about just one color, and the intimations that might be found there? A lot. With nearly any word, I go back, look in, look deep. When you examine the heart of a word, that etymon, there is a layering of content that’s meaningful. At least for me, that’s the way it works. Study the network of meaning, and frame the tapestry of content. Here’s a string to an etymological spread of ideas — and implications:
yellow
O.E. geolu, geolwe, from P.Gmc. *gelwaz (cf. O.S., O.H.G. gelo, M.Du. ghele, Du. geel, M.H.G. gel, Ger. gelb, O.N. gulr, Swed. gul “yellow”), from PIE *ghel-/*ghol- “yellow, green” (see Chloe — below). The verb meaning “to become yellow” is O.E. geoluwian. Adj. meaning “light-skinned” (of blacks) first recorded 1808. Applied to Asiatics since 1787, though the first recorded reference is to Turkish words for inhabitants of India. Yellow peril translates Ger. die gelbe gefahr. The sense of “cowardly” is 1856, of unknown origin; the color was traditionally associated rather with treachery. Yellow-bellied “cowardly” is from 1924, probably a rhyming reduplication of yellow; earlier yellow-belly was a sailor’s name for a half-caste (1867) and a Texas term for Mexican soldiers (1842, based on the color of their uniforms). Yellow dog “mongrel” is attested from c.1770; slang sense of “contemptible person” first recorded 1881.
yellow journalism
“sensational chauvinism in the media,” 1898, Amer.Eng. from newspaper agitation for war with Spain; originally “publicity stunt use of colored ink” (1895) in ref. to the popular Yellow Kid”character (his clothes were yellow) in Richard Outcault’s comic strip “Shantytown” in the “New York World.” 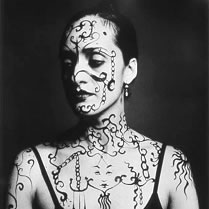 Toledo, who’s the wife of designer and illustrator Ruben Toledo, the current illustrative reference for all creative at Nordstrom, said that about thirteen people in her studio worked on the outfit over the Christmas holidays. “Chinese ladies, Polish ladies, Spanish ladies—I have a picture of everyone working on her clothes,” Ms. Toledo, who is 48, said. She added, “We’re all grateful for this opportunity, and we don’t even have a PR person!”
Like the other designers who have made inaugural clothes for Mrs. Obama, Ms. Toledo worked with Ikram Goldman, the owner of a boutique in Chicago called Ikram, where Mrs. Obama has previously bought clothes. Ikram also sells clothes by Narciso Rodriguez and Maria Cornejo, other favored designers of Michelle Obama.
Color is psychically deep — in its ability to captivate, and capture the expression of experience — it is a nearly indefinable, ineffable quality. It’s emotional — it’s instantly reactive and inciting. We see color and respond instantly — often times, not even knowingly. And emotionally, we connect with yellow because it’s about the Sun — it’s the entablature of how all light seemingly works; it’s the stream that feels like it makes other colors real. It’s the embodiment of living light. And that’s what we need. Light. Energy. Golden healing. Health vibrancy.
Michelle seems to have thought that through. Or, instinctually, she’s said — this is what I need to say to the people. She’s clearly linked in, resolutely throwing open, flinging wide, the doors of The White House. To hope. 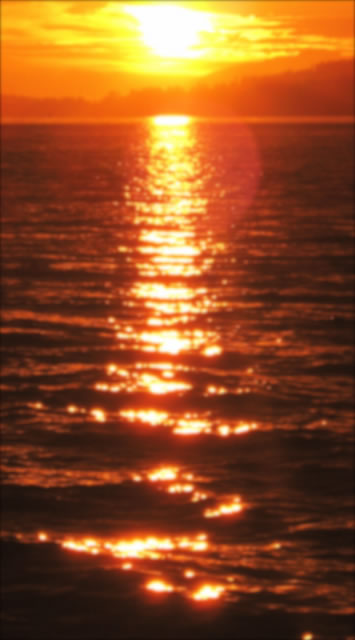 Personally, I can relate to that path to light. And, being a leader among leaders, she’s out in front about the presence of her sentiments.
What about you and yellow?
tsg | NYC
—-
References:
http://www.huffingtonpost.com/2009/01/20/michelle-obamas-inaugurat_n_159344.html
http://www.webexhibits.org/pigments/intro/index.html
http://www.goldenpaints.com/products/color/heavybody/histpighist.php
http://dictionary.reference.com/
http://www.bartleby.com/61/IEroots.html
http://www.apparelsearch.com/Definitions/Dye/pigment_definition.htm
http://www.colormatters.com/colortheory.html 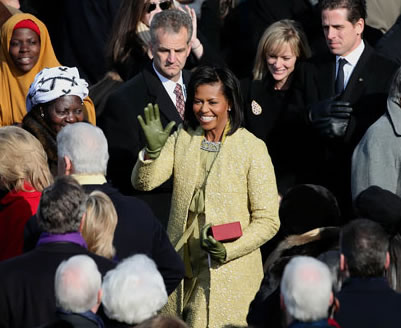 Doug Mills/The New York Times
What about the concept of the colors, themselves — how does the color work? What’s it come from? Where does yellow derive it’s compelling power?
Color Analyses |YELLOWS:
Orpiment: Pigment of Gold. It was said that it can only be lightened with white from calcined hartshorn, NOT with white lead as commonly used. (see pigment chemistry page) There are two arsenic yellows called “yellow orpiment” (King’s Yellow or Royal Yellow: arsenic trisulfide) and “red orpiment” (Realgar or Risalgallo: arsenic disulfide). De Mayerne mentions that orpiment should not be touched with an iron knife. Later replaced by an artificial version known as King’s Yellow or Auripigmentum, a very bright, opaque yellow. Poisonous and not reliably permanent, having limited compatibility with other pigments. Used from the earliest civilizations and throughout the history of art until they were replaced by cadmiums.
Light and Brown Ochre: made of earth. Light ochre was used in flesh tones. Brown Ochre is a dull variety of yellow ochre (PY 43). The Romans called it Sil, with the finest grade coming from Greece called Attic sil.
Mars Yellow: rust of iron. (PY 42) Today it is factory-made iron hydroxide that usually resembles the tone of the natural earth yellows, such as yellow ocher or raw sienna. It is permanent.
Light and Dark Yellow Lake: vegetable based dyes impregnated upon chalk (white earth). Like all lakes, susceptible to fading. Yellow lake is an unstandardized term used for a number of transparent pigments today and is reliably substituted by Cobalt yellow (PY 40) and the Hansa Yellows (PY 1, 3, 65, 73, 74, or 98).
Massicot (Masticote): (lead tin yellow); Was thought at one time to be a monoxide of lead, but is deeper or more pinkish in hue than litharge. blackens in time and changes when exposed to the sun. Never was considered permanent. Cennini remarks that its tint was injured by much grinding. Italian writers referred to this as giallorino, giallolino, and giallolino de Fiandra.
There seems to be some confusion in literature as to the exact makeup of Massicot. Lead-tin yellow is said by some conservators to be similar in handling and properties to lead antimoniate. (see below – Naples Yellow)
Naples Yellow: Lead Antimoniate (PY 41)- poisonous. The true pigment is infrequently sold today. (check Pigements Present listing for retailers) Around 1700 Naples yellow began to replace the hitherto traditional yellow pigment, lead-tin yellow, and enjoyed its highest popularity between approximately 1750 and 1850. It was itself replaced by the barium chromates and cadmium sulphides. “There is no explanation for the disappearance of lead-tin yellow from the painter’s palettes and the replacement with lead antimonate. Lead-tin yellow can, dependent on component ratios and firing conditions, be made of an intense colour. Lead antimonate is often of a rather pale hue. Other wise, the working properties of both pigments are fairly similar. The production methods for Naples yellow are quite similar to those for lead-tin yellow (type I). In the production of Naples yellow the stannate component of lead-tin yellow was simply replaced by antimony.”
— Joris Dik / Arie Wallert
It is a useful color that has many of the characteristics of flake white, such as a rapid rate of drying and good film-forming properties. It shares the disadvantages of flake white — that is, it is toxic (but careful use prevents harm) and sensitive to sulfur (but can be protected from atmospheric pollutants by varnish and by avoiding combination with reactive sulfide pigments.(see pigment chemistry page) Modern substitutes sold under the name are usually mixtures of cadmium yellow, zinc white, and ocher. These dry more slowly and have an inferior film quality when compared to true Naples Yellow.
Lightfastness: I
Oil Absorption: Very Low
Oil Film: fast drying, tough, flexible
Toxicity: highly toxic, do not ingest, do not breathe dust
Saffron: An obsolete bright yellow color obtained from the dried petals of Crocus sativus. Fades badly in daylight. Used in Roman times.
Litharge: Lead monoxide. A heavy, yellowish powder (obsolete as a paint pigment) used as a drier when cooking resin-oil varnish mediums.
Mixtures: Yellows were mixed with Vermilion to make a nice golden orange. And transparent yellows were mixed with red browns to glaze in warm shadows over a light ground.
Golden pigment overview: 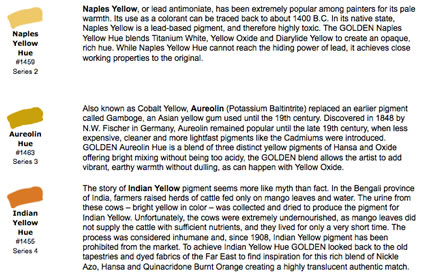 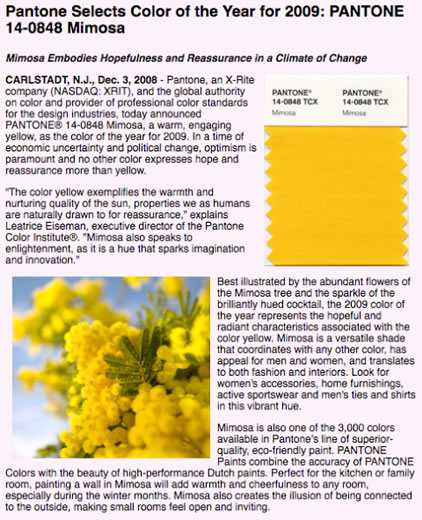 Defining story, brand and environment -- in synchrony. Finally. When I was working in Paris, several years ago, I'd connected with Serge Trigano, talking to him about a series of projects. Serge comes from the family that originated ClubMed -- a wildly successful innovation, that essentially revolutionized the concept of vacationing club-type adventures and specialized…

The word | language and the design of brand identity

Exploring the comprehension of the word as a primary aspect of brand development in consumer recognition. logocentrism, n. I've been thinking about the context of branding in relationship to the word. I look at words. And see what they say. And what they mean. And in exploring the city, I see a word, or words…
We use cookies on our website to give you the best experience on our website. By clicking “Accept”, you consent to the use of ALL the cookies.
Do not sell my personal information.
Cookie SettingsAccept
Manage consent