ZEN BRANDS | THE CALLIGRAPHY OF NOTHINGNESS: THE MU KOAN. 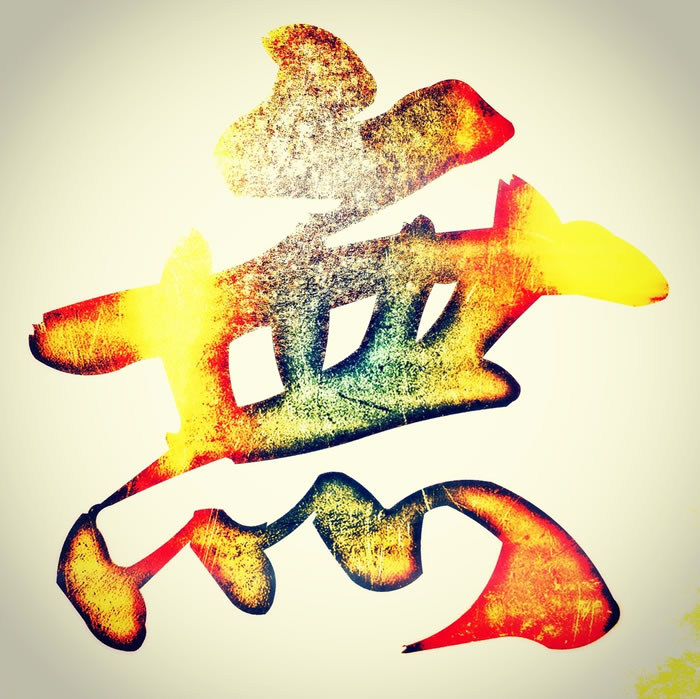 DRAFTING ABSTRACTION — THE MYSTERY OF PRESENTING NOTHING AND ABSENCE OF PRESENCE.

In our brand work, we’re always looking at how to “be there,” how to “present,” how to offer solutions that are about context, place-making, certainty of premise, a real promise and authenticity.

What if the promise is nothing?

While some might find the idea of aligning Zen principles to branding it might come down to this — for one: “you only know what you know now.”

I’ve commented on that previously. 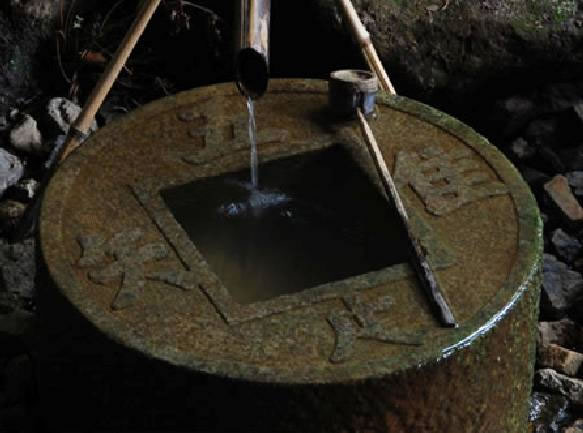 And it relates, as noted before, to the puzzle stone in the renown Zen Garden Ryoan-ji.

Each part of the character sequence relates to central square, a character modifier, which translates, as a puzzle, to “you only know what you know, now.” That of course comes to the premise of strategic foundations of brand work, you start, you work through positioning and audience relationships, and your tactical outcomes of action steps in a manner that is always infused with nowness. Or the “no” that leads to now — and the “yes” that contrasts that condition.

But what of nothingness? And the character Mu, as shown at the start of this blog?

That’s part of the puzzle of the Zen parable — the “Mu” koan, which is like an unanswerable question. It goes like this, according to Liza Dalby and her collective exploration of Mu. Her work is “Inspired by the Zen koan, ‘Does a dog have Buddha nature?’ the MU Collaboration (MuKorabo) project joins calligraphy and art by numerous artists in a non-conventional take on the traditional Asian hanging scroll.”

This collaborative effort comes to these character expansions: The Japanese and Korean term mu (Japanese: 無; Korean: 무) or Chinese wú (traditional Chinese: 無; simplified Chinese: 无) meaning “not have; without” is a key word in Buddhism, especially Zen traditions.

Clearly, the idea of a koan
as a puzzling and abstract response are full of implications and variations on meaning.

Steve Heine, at the Oxford University Press’s Academic Insights for the Thinking World offers a series of studied, tiered implications, and offers a conclusion, which is not a conclusion, but a facet to the unanswerable: he notes in “the prominent twelfth century Chinese master, Daie: This approach takes the “Mu” response in a non-literal way to express a transcendental negation that becomes the topic of an intensive contemplative experience, during which any and all thoughts or uses of reason and words are to be cut off and discarded for good rather than investigated for their expressive nuances and ramifications.”

What that means, to one take, would be “much ado about nothing” is a waste of time: “nothing is nothing — meditate on that!”

So I did, at Liza Dalby‘s request,
to create an interpretation of nothingness.

And in my realm of contemplating nothing, I saw that as a gateway, a whorl into a deeper layering of experience — one in which storms and waves wheel and turn and roil in
the nothingness of everythingness.

For in the Zen context, everything is nothing.

So I drew it as a gateway into a landscape of strokes and movements the churn in the uncertainty of that premise; there is nothing in everything. There is everything in nothing. That, for me, is the gateway to nothing, and to everything. It’s closed and opening at the same time; it is the “gateless gate.”

When I use the brush for a rendering of anything, I’m looking into the deep part of the stroke and how that alchemy of ink transforms the white stock as a place of supernatural reality. 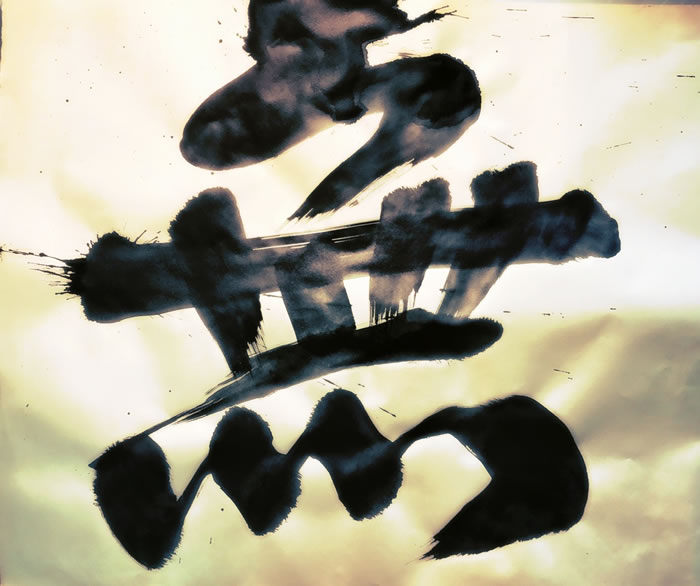 The piece starts with the core character, which is then contained in a whorl of grey calligraphy, a kind of enso into another universe. 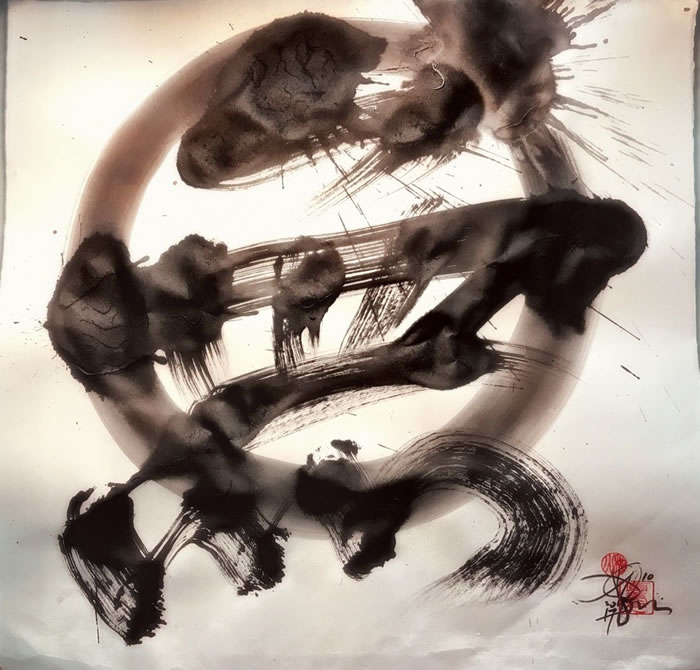 You can see the initiative strokes
and the renderings
on top of the draftings,
the stroke sequence —
the move in,
further and further,
until there is
another world, whorled —
a talisman of nothingness. 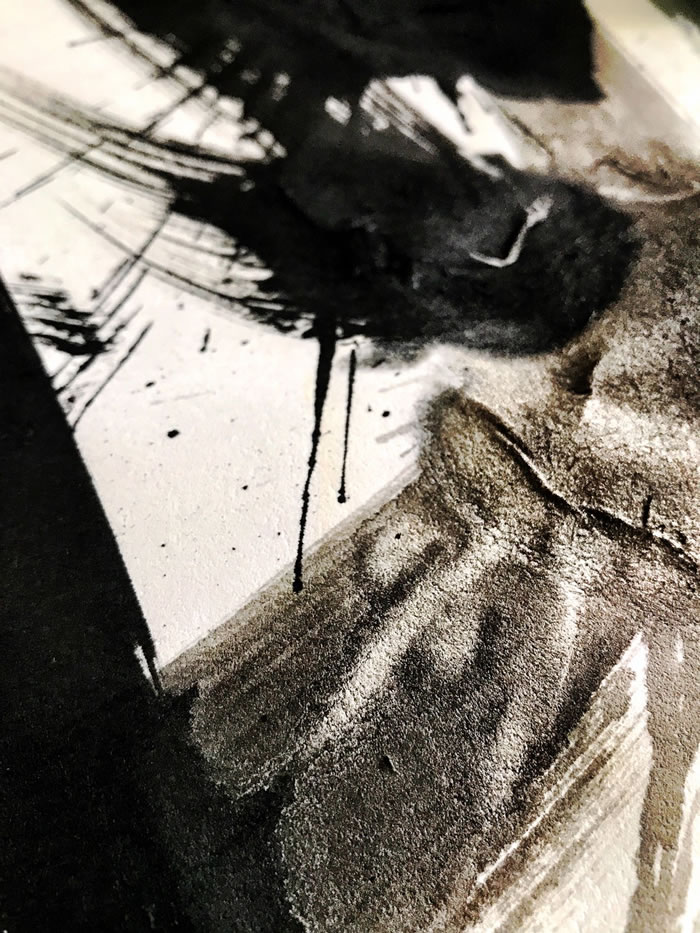 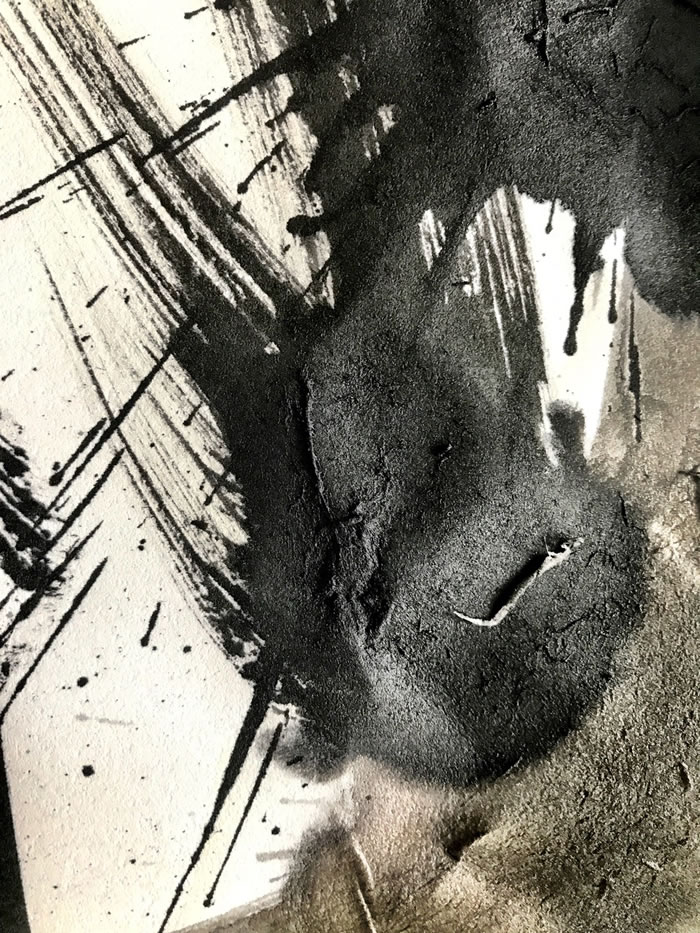 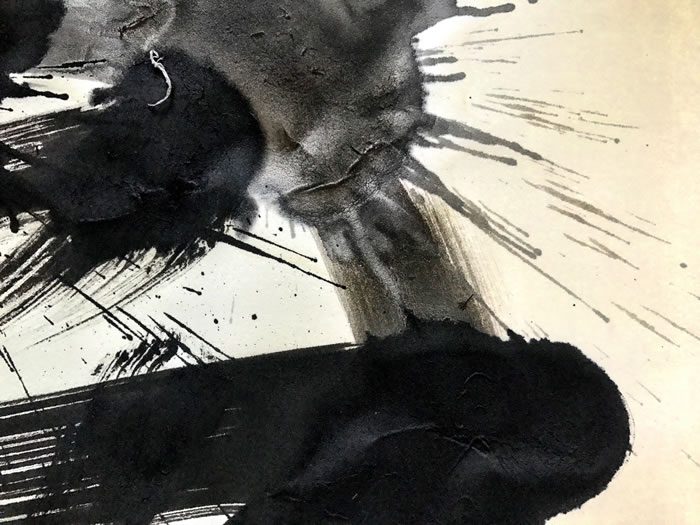 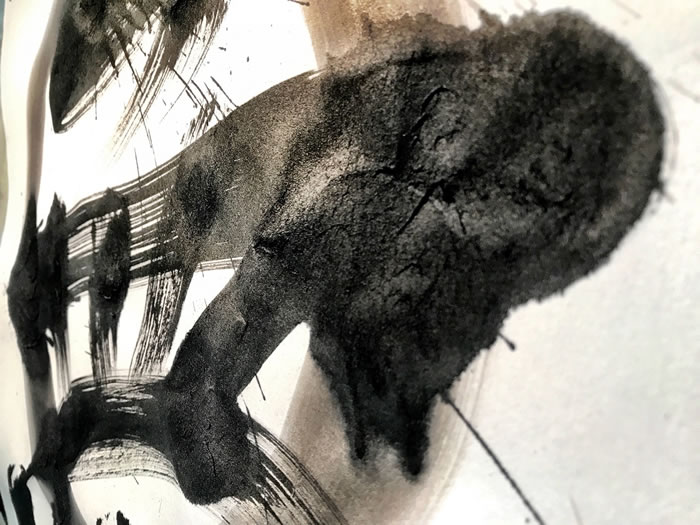 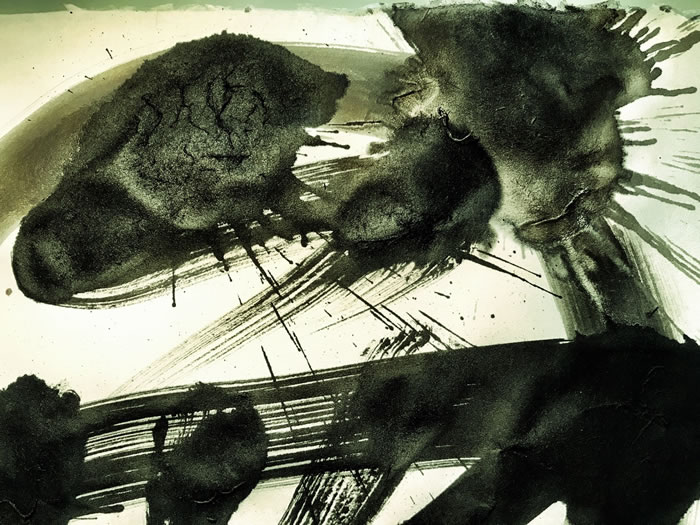 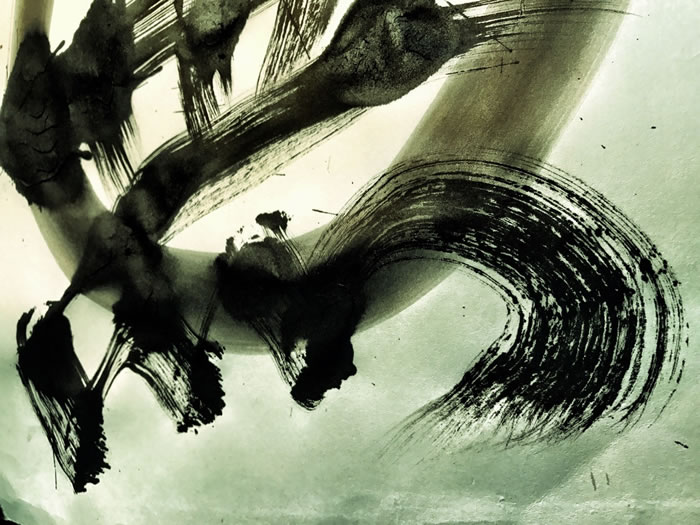 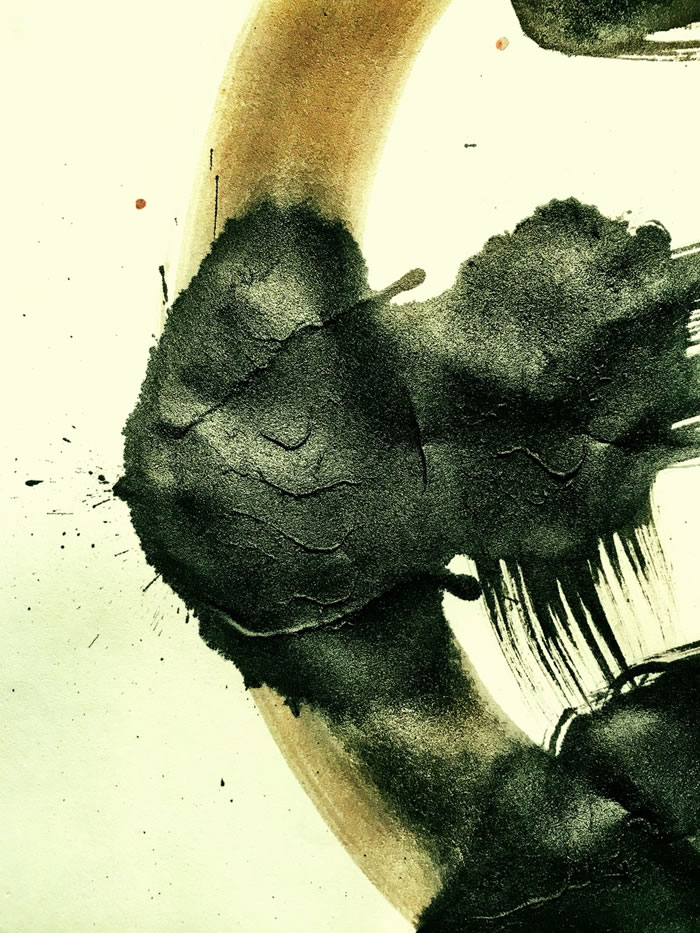 Which
is
every
thing.

That final sequence is here:

And, to how this might relate finally, to a sense of brand strategy — as far a reach as it would appear —
would be as follows:

— Energy counts for everything.

— There should be depth to the thinking of the why and how a brand works, what it stands for.

— Work your way into strategy with a deeper meditation on construct; you’re here, why?

— You’re telling a story for what, for who?

— Commit to the deep brand space, the nebulous metaphors and allegories, then rise to increasing layers of accessibility.

THE CODE OF THE MESSAGE | THE DESIGN OF THE ALPHABET

THE ILLUSTRATION OF THE MIND: FROM THOUGHT TO WORD IN DESIGNED LETTERFORM LINGUISTICS | ALPHABETS AS BRAND VOCABULARIES. Working on hundreds of logos and corporate identity packages, in decades of design and brand development for clients around the world, over time there are learnings to the hidden code of the alphabet, and how that applies…

AS A DESIGNER, A BRAND PERSON — A CREATIVE, A STRATEGIST, A MARKETER — YOU WORK IN THREADING ALIGNMENTS OF CREATIVITY. THAT COMES TO THIS PARALLELISM: THE SYNCHRONY OF HOW YOU THINK, WHAT YOU’VE WORKED ON AND WITH, AS WELL AS WHERE YOU’VE BEEN. IT COMES DOWN TO: WHAT YOU ACTUALLY KNOW, AND WHAT YOU…
We use cookies on our website to give you the best experience on our website. By clicking “Accept”, you consent to the use of ALL the cookies.
Do not sell my personal information.
Cookie SettingsAccept
Manage consent