Attentionality and intentionality: brand awareness and the focused relationship

What are you paying attention to? And in that equation, what are your customers paying intention to? 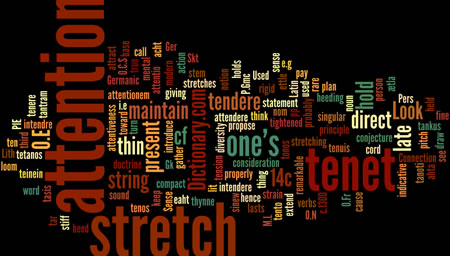 What drives them to intentionally pay attention?

There’s tension in that balance. Sometime back, I’d connected with Lynda Weinman and her husband, Bruce Heavin. This was at the Evergreen State College — and the launch of the new Lynda Labs in the media center there in Olympia, Washington. Along with connecting with Bruce and Lynda, I’d connected with Linda Stone. Linda’s a theorist — long running explorer — of the concept of attention, particularly in the relationship to technology. But there’s a spin there, in her explorations, to the concept of the passing of noise, data, to content, to wisdom (that’s out there in the future, to her take.) She’s mapped the concept of sequencing in the attention of the increasingly complex siege of information — and how it comes into manifold play in our experience.

In the masthead of her blog, she references the innovator Dee Hock, who has explored not only the building of a seminal brand, VISA, but as well building organizations that are uniquely founded on his “chaordic” strategy of consensus driven enterprises. His sentiments on data evolution and recognition are written of the sequencing of this content, in the following frame:

• Noise becomes data when it has a cognitive pattern.
• Data becomes information when assembled into a coherent whole, which can be related to other information.
• Information becomes knowledge when integrated with other information in a form useful for making decisions and determining actions.
• Knowledge becomes understanding when related to other knowledge in a manner useful in anticipating, judging and acting.
• Understanding becomes wisdom when informed by purpose, ethics, principles, memory and projection.

Linda posits her take on this temporal sequencing:
1945-1965
Noise to Data

She references the notion of transition, moving from a present state of being “Knowledge Workers” evolving to “Understanding Workers” — and, in the future, “Wisdom Workers.”

This is fascinating thinking, by a person that’s blogging on her own site, as well as linking to O’Reilly and Huff.

The conversation that Linda and I’ve had relates to the interplay of devices and attention — and branding and intention. And we’ve mixed it up — between the two of us.

I’m thinking about some layering of content into the etymon — the heart of the words that lie in the center of the concepts of attention and intention.

For Girvin, the idea lies in the focus.

If there’s nothing resonant in the character of how that story is told, there’s no one listening. And if the intentionality in that telling is less than authentically captivating, then there’s no point in even beginning the narrative.

There’s a clue, hidden in the structuring of the deeper content of the words.

The heart of the word, intention, rises from intend.
O.Fr. entencion “stretching, intensity, will, thought,” from L. intentionem, noun of action from intendere.

Intend, a leaning, speaks to focus — “direct one’s attention to,” from Old French intendre “to direct one’s attention,” from Latin intendere “turn one’s attention, strain,” lit. “stretch out, extend,” from in– “toward” + tendere “to stretch” (see tenet). Sense of “have as a plan” (late 14c.) was present in Latin. A Germanic word for this was ettle, from Old Norse ætla “to think, conjecture, propose,” from Proto Germanic *ahta “consideration, attention” (cf. Old English eaht, German acht).

That sequence is bolted to the meaning of tenet — a stretching toward, but a principle implied. And this, perhaps, is the ancient place of the linking between intention and attention — the principle of stretching, yearning, linking to focus. It is an embrace, a holding.

Tenet is a “principle,” properly “a thing held (to be true),” 1413, from Latin tenet “he holds,” third person singular present indicative of tenere “to hold, to keep, to maintain” from the 4,000 year old Proto Indo European base *ten– “to stretch” (ranging to the Sanskrit tantram “loom,” tanoti “stretches, lasts;” and, from there, the eastern expansion in the Persian tar “string;” northwards to Lithuanian tankus “compact,” i.e. “tightened;” Gk. teinein “to stretch,” tasis “a stretching, tension,” tenos “sinew,” tetanos “stiff, rigid,” tonos “string,” hence “sound, pitch;” and finally to the Latin tendere “to stretch,” tenuis “thin, rare, fine;” the 9th century Old Church Slavonic,  tento “cord;” and spreading to the Old English thynne “thin”). It might be noted that the connection notion between “stretch” and “hold” is “to cause to maintain.” The modern sense is probably because tenet was used in Medieval Latin to introduce a statement of doctrine.

Attention follows in the late 14c., “giving heed,” from Latin attentionem (nom. attentio) “attention, attentiveness,” noun of action from pp. stem of attendere “mental heeding.” This word has been used, as well, with a remarkable diversity of verbs (e.g. pay, gather, attract, draw, call). As a military cautionary word preparative to giving a command, it is attested from the late 1700s.

The point to engagement is embrace. To attend, is to hold. To pay attention, to be intentional. To stretch inwardly — towards something.

Pay attention. Be tuned. Attend to your intention. For you, for the brand, for the enterprise, for the story.

What story will hold your attention, and what is your intention in telling it?

EXPERIENCE NOMAD: EVENT HORIZON | I WAS THINKING ABOUT ANTONY GORMLEY'S INSTALLATIONS. AND THE FIGURE IN SURVEILLANCE. I was thinking about the watcher, the sentinel. And the sentient. In NYC, we live -- Girvin's offices, are -- in the neighborhood of Madison Park. Broadway, 23rd-26th. Around the arc of this park, on building ramparts looking down…

Are you poorful, or richless? Our economy's new language - shifting story and interpretations Brandstory and language: what's the positioning -- in a challenging milieu -- what are we really looking for: rich, poor, satiety or survival? How do we describe it? And feel about it? In times of abs(tin)ence, are we rich less, or…
We use cookies on our website to give you the best experience on our website. By clicking “Accept”, you consent to the use of ALL the cookies.
Do not sell my personal information.
Cookie SettingsAccept
Manage consent