Passage, relevance and the scent of time. 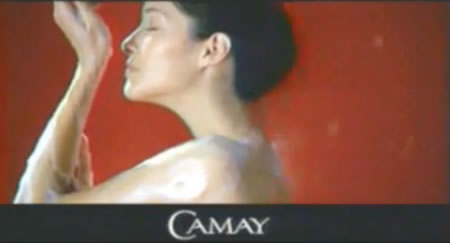 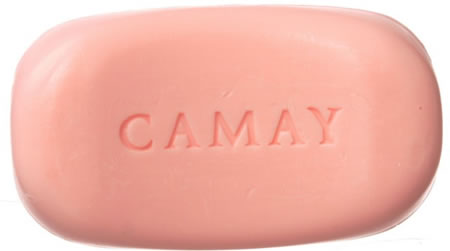 The pink bar of soap: 84 years of Camay. Photograph by Dan Neville.

What happens when a brand disappears?

Girvin brand backgrounder
Working as brand strategists for Procter & Gamble, our official title as consultants there, we’ve worked on defining, naming and building the evolutions of literally dozens of brands. Girvin’s — the firm — not big. From the earlier decades of Girvin as monster brand firm – with 12 separately defined studios, including industrial design, brand strategy, naming, architecture, interactive, motion design, entertainment, packaging and messaging, we’ve metamorphosed into a different butterfly. And surely not in that sequence, or any other — processes, and our transitions — were built to match. But marketing an enterprise of that order of magnitude was equally challenging. These days, the leanest approach allows Girvin to act with lithe resilience. We move and build teams to match — grow and compress — as we will.

Beginning strategies
Working for P&G’s Jon Denham (during that time,) a global brand and design director, and Ted Keegan, marketing director and global franchise leader, we actually began the discussion over storytelling about Girvin’s motion picture typology / typography / imagery work — branding the visualizations of stories — and their messaging — to tune to the telling of the audience and the directorial intentionality. One story leads to another. 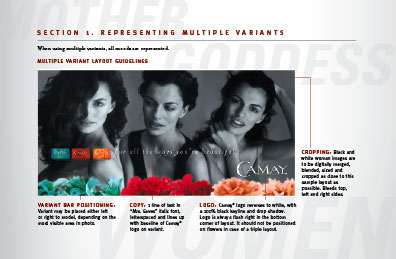 That lead to a talk about Camay — it was a brand that had extraordinary distribution — deep in — a global reach to about 60 countries. That is definitively broader, and deeper than most — a legacy reaching back decades in brand definition and expansion. Interestingly, it was the talks about the idea of brand, story, presentation and visualizations that lent themselves to the idea of how to take the legacy of a brand that P&G was thinking of discarding — and rethink its proposition. 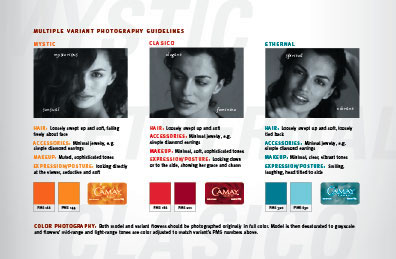 Brand soul, primeval storytelling and scent
There are two tiers. The brand soul of Camay relates to the proposition of the archetype of the Mother Goddess, the Caregiver — and the mystery of the evocations of scent, to the power of that millennial heritage. That storytelling ideal is nothing contrived of marketing jingo, but is coming from the framing of dozens of global interviews — interceptions examining the mystery of the user’s psyche in examining the role of the woman in her “family.” 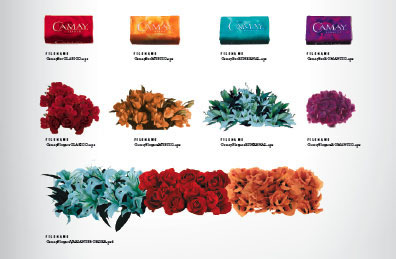 That story lent itself to the researching relationships — user connections to the soul of the brand and personal connectedness. Seeking stories –conceptions of the power of scent — exploring through testing the relationship of varying audiences to Camay, it was found that scent drove the equation. But there was more beneath the surface of the brand. It wasn’t merely the international audiences — sometimes deeper buried in the distances of India, the Middle East / Eastern Europe and Russia, South East Asia and finally, Latin America. What resonated in all was the conception of a psychic, even archetypal (mythic mother and mysterious legend of the hearth keeper) remote and “unreachable.” That psychic revelation, something that was tested and culled from participants — worldwide. Exploring that notion, the idea of that positioning — the feminine mystique, and the scent that might proclaim that proposition. Here, women (in the right markets) leapt at the equation — testing and query confirmed the standard. 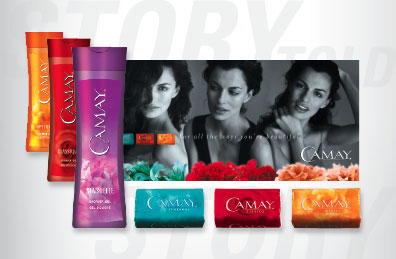 That brand (interestingly enough, the product that was one of the foundations of P&G’s legacy) was rebuilt on that proposition – that scent, the mysterious waft of remote and feminine power — would be the continuing foundation of the strategy. Need to know more? Added references can be found here. Girvin brand story. Camay historical legacy. Psychic brand, instinct, archetype and brand strategy. Worked that world — and surely learned from it as well. Camay was the first brand to promulgate the now famous edict (Neil McElroy, 1931 — the P&G introduction — strategy of “brand management.”

What happens when a brand like that appears to be pulling sales — reducing its merchandising share? Recently, there was a pronouncement of sorts to that effect — Camay is disappearing. As Ricki Morell pointed out in a reference in the NYTimes, the legacy of Camay might’ve been turning, but there are legions of women out there still committed to the brand. And that brand legacy, interestingly enough, goes back to the heart of our opening efforts — scent, beauty, mystery.

A month ago, as he notes, Camay has been running like a luxury product on the hidden blacklist — at “Amazon.com this week, Camay was selling by the case, like a particularly sought-after wine: 48 bars for more than $50. “I have been looking all over for Camay soap,” one customer wrote. “I was afraid I would never wash again.” “Memory bars is what I call them,” wrote another.”

What of international sales? I looked. 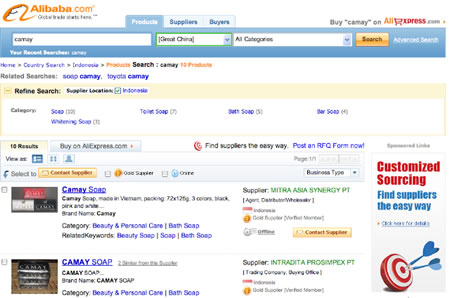 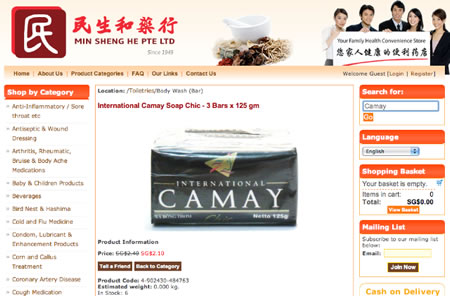 Exploring that selling, internationally, I found that it’s running like a limited item on the master lists of AliBaba and others — selling in limited quantities. Still, the character of the brand relates more to its international sales, and less to distribution stateside. It’s accessible there — bars and washes. 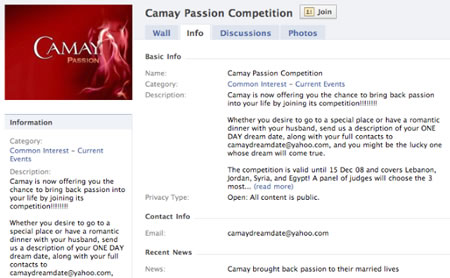 The interesting legacy is that with the disappearance of heritage brands, they become items of rarity — and the voice of the crowd rises (if they know how to raise it!) It might be pointed out that the history of the brand reaches back in time to the perfume space — people have spectacular references to history, memory, and scent. Camay is a more classically composed product — it’s more “natural” in the nature of its fabrication, in comparison to, for example, Dove. According to Morell’s notes, “Dr. Amy Derick, a dermatologist in Barrington, Ill., suggests that Camay, which is a traditional soap like Ivory, may feel less irritating because it contains glycerin.” Scent regales: “Camay soap remains a cultural touchstone. “I love the perfume smell,” said Billie Brown of Cove, Tex., who declined to give her age. “It’s lightly fragrant. It’s totally feminine.” Ms. Brown remembered her mother setting out the Camay on the bathtub of her childhood home near Lake Charles, La.. Because the soap disappeared from her Kroger supermarket, she now buys it online.” 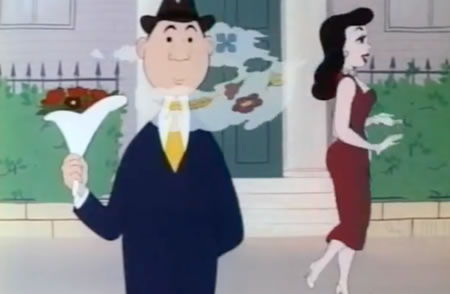 The idea of scent, brand, story is intermingled extensively in this product — where to go, next, in the evolution? One path that could be obvious is exploring the Old Spice allegory (“Smell like a man”) of a viral brand storytelling (Girvin notes). There’s a masculine pointedness on that front that makes the infectious strategy for visual expansion on line — story on story to be patently resonant. One story becomes another shared, while community members build their own stories based on the field of their own experiences. Could that work with this demography? 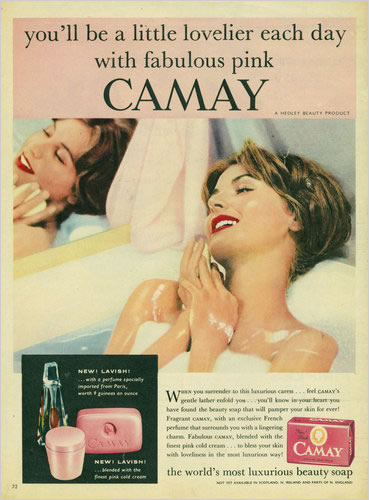 The ultimate key will be the soul of the brand and if it can find relevance again – there are users out there, but their connection is based on the memory of dissipating experience. While the modeling for the layering of the brand sales globally reaches to Latin American, Eastern Europe, Russia, China and Southeast Asia — and scent is the mysterious illustrative compulsion there — could the nostalgic ring ripple again in reviving the story of the brand more deeply to an American mass condition? 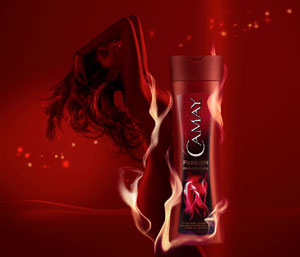 Worth watching. The soul of the brand ignites community rings of interest — stories spread like fire, legends are aroused and the mythic underlayments are fortified. And, in this instance, scent is the wafting fragrance that binds these tellings to memory.

The scent of a woman: video, the story tells it all.

See Your Impact | Finding the Soul of Charity

What is the nature of compelling giving? What are the tools to build a brand story that has soul, connectedness and impact to emerging audiences? Dig in. Go deep. Reach far. Finding time, reaching to the giving community in building humanitarian brand and charities Brand soul. Soulful enterprise. Working on the newest brainchild of client…

Love, story, brand and the cartography of strategy -- drawing it out.

Exploring brand metaphors and soul: charting strategic pathways and innovation I was thinking about search -- reaching in(to people) -- listening to them, learning from them, and gathering their impressions and ideas. Search for it, listen to them, what does that look like? But more so, to the construct of what they love, what they…
We use cookies on our website to give you the best experience on our website. By clicking “Accept”, you consent to the use of ALL the cookies.
Do not sell my personal information.
Cookie SettingsAccept
Manage consent