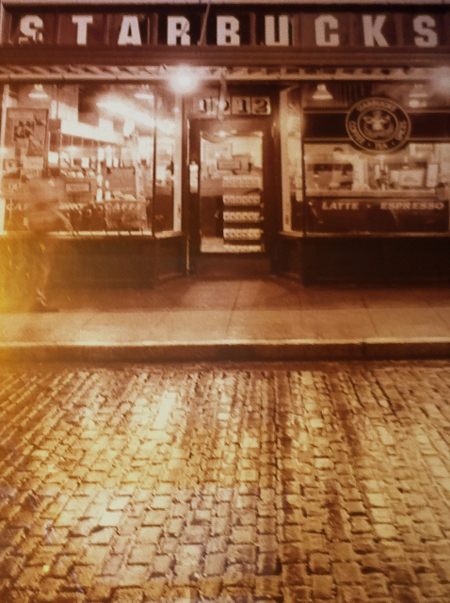 The spirit of the impassioned leader or founder speaks from the heart, which can drive everything, top down.

Spirit sparks spin — which isn’t just that, spun “stuff,” but rather — truth, brilliance in a leading light, lighthouse, watchtower: inspiration. That could be a reason for being — not just money, but soul, humanity, political statements – and risky stances. The point might be, that if the soul of the brand syncs to the realness   of the purposeful strength of the stride, and it’s true, it flows. And many of the most fluent brands speak to a mission, a consumer promise that isn’t only about money and liquidity in return, but — as well — social attention and giving consciousness; brand soul. Fullness of intention.

It’s where the rippling story begins, brandfire sparks the fuse that ignites the embracement of ignition, captures one person, carrying that story forward, then on –and another, and another. Commitment runs deep, in the telling of tales — the listener is either in. Or out. They relate — they hold it, and carry on [it’s now their story] and, better still, they carry it out to others. [Latin, relatus, “to carry, to refer back.”]

Having worked live in the character of closely working with leaders, their heart in the legend-making, myth-weaving of brand storytelling I can spin a tale or two about the buy-in to truth .

Savior, showboat, and spin-master, the Starbucks CEO was recently named the Business Leader of the Year. But he’s now pushing the spin too far for the $40 billion company’s own good.

At this past week’s annual meeting of Starbucks shareholders, Chairman and CEO Howard Schultz focused his opening remarks not on beans, baristas or lattes, but instead on “the fracturing of the American dream” and “sending a signal to Washington.”

That was no surprise to Starbucks followers, given that the New York Times‘ Joe Nocera teed up last week the fact that Schultz would be giving a speech articulating the importance of the “larger societal role the company has embraced.”

That same basic theme prompted Fortune magazine to pick Schultz as “Business Leader of the Year” for 2011, saying Starbucks boss distinguished himself from the pack of other top-performing CEOs because he now “blends capitalism and activism.”

But there’s another award, if it existed, that Howard Schultz would have also won: “Business Spinner of the Year.” In fact, he’s probably earned a lifetime achievement award.

I say that largely as a compliment. Much of the business world runs on self-fulfilling prophecies, and many major businesses owe their existences to tenaciously spinning entrepreneurs who insisted on making the story they were telling come true. Would Apple, for instance, be the most valuable company in the world today without Steve Jobs’ notorious Reality Distortion Field?

The same is true for Schultz and Starbucks. In his first tenure as CEO, Schultz turned a tiny company into an international giant by doggedly contending the world was looking for a $4 cup of coffee. That concept may seem obvious now, but it certainly was not when Schultz bought the company in 1988, given that the coffee business in America had been in serious decline for decades.

A highly able executive in virtually every dimension of his business, Schultz also innately understood from the beginning that successfully managing his business depended on successfully managing his story. Long known as an irrepressible salesman, Schultz has always applied that same determination to engaging the news media, learning that his willful, winning personality could overcome many obstacles that would stop others.

But it wasn’t until several years after Schultz gave up the role of CEO that his spin skills jumped to a whole new level.

Consider that the current typical sound-bite summary of the Starbucks narrative goes something like this:

Howard Schultz returned to Starbucks in 2008, rescuing the company by ending its over-emphasis on growing rapidly at all costs. By refocusing the company on its original strengths, Starbucks is now producing its best results ever.

Nice and tidy, not to mention completely Schultz-centric.

Now consider the actions that essentially created that narrative.

To “return,” Schultz had to first “go away,” something most Starbucks observers say he never really did when he gave up the CEO title in 2001, remaining in the headquarters offices as a highly active chairman, not to mention the originator of the company’s emphasis on rapid growth.

Schultz then set the context for his return with his famous Valentines Day memo in 2007 to then-CEO Jim Donald. Entitled “The Commoditization of the Starbucks Experience,” the memo outlined in crisp, stark terms how the reckless pursuit of growth and profits had caused Starbucks to abandon what had made it successful.

The memo was leaked through Jim Romenesko’s Starbucks blog, which triggered widespread media attention. The intentionality of the leak was denied by both Starbucks and by Schultz in his book.

The commoditization memo neatly defined the problems, and when Schultz formally returned as CEO and president in January of 2008, he hit the ground running on Day-1 with an explicit, 5-point “transformation agenda” that just as neatly defined the solutions.

Schultz also did what every savvy CEO does when taking the reigns of a troubled enterprise, resetting the financial baseline from which the company would be evaluated in the future. That required writing off inferior assets, which meant closing nearly 1,000 stores worldwide and reportedly firing tens of thousands of people.

Always good at leveraging symbolic non-events into news, Schultz then famously chose to close Starbucks stores for three hours to “retrain” the baristas. Simple and concrete, the clumsy publicity stunt quickly aged well as a sturdy plot point in the lore of The Return.

And then, after the reset, as the business results began to turn positive, Schultz wasted little time in trying to dictate the narrative by almost literally dictating that narrative in the form of his latest book, Onward.

Some reviewers panned the book as a bromidic self-hagiography. But it effectively crystalized the basic storyline for the Fortune piece, which also dutifully moved that story forward by adding the capitalism/activism chapter.

He rescued the coffee chain. It had record financial results this year. Now the CEO is on a campaign to save the country from its politicians. Here’s how he blends capitalism and activism.

WHAT’S WRONG WITH A LITTLE SHOWBOATING?

While some speculate that those efforts reflect Schultz’s desire to enter politics, the more likely explanation is that Schultz simply following his own savvy instincts for clever spin.

First, he’s embracing his weaknesses as strengths. In the coffeehouse world, Starbuck’s biggest vulnerability is its size, ubiquity and “corporateness.” But Schultz flips that disadvantage on its head, repeatedly hammering the notion, “This is about using Starbuck’s scale for good.”

Second, he’s avoiding villainy by attacking a far larger, far more topical villain. Having permanently reset the Starbucks employee base to restore the company’s old margin structures, Schultz could be considered a little brazen in declaring a bracelet-fueled war against joblessness. But who could be against someone who’s taking on “Washington,” “politicians” and “all the banks with all the TARP money?”

Third, he’s making headlines because he’s providing journalists with a fresh angle on the unemployment theme that dominates America’s current political narrative. Or in Nocera’s case, providing a contrast for the sinful ways of Goldman Sachs.

Those tactics have generated substantial coverage, with seemingly only morning man Matt Lauer applying some skepticism.

OK, so the boss is showboating a little? Why is that such a bad thing for Starbucks?

It’s dangerous, and for two reasons.

Danger #1: Scrutiny. The more he talks, the more scrutiny he invites, and on the wrong things.

Starbucks is widely understood to be ethical and progressive in its business practices, particularly with its procurement programs. That’s good, and the company should continue to proudly refresh that story every chance it gets.

But when it comes to political reform and job creation, Starbucks must be careful to not flaunt one of the fundamental rules of 21st Century communication: The louder you talk, the more you are asking for the world to take a close look at your walk.

And in reality, Starbuck’s efforts with political reform and job-creation are relatively tiny and largely symbolic. Its political efforts have basically consisted of a temporary call for boycotting contributions, and lots of Schultz interviews on the subject.

And the company is particularly vulnerable on the jobs issue, where its efforts have been anchored around the media-sexy bracelet program. While Schultz would inform shareholders only that the program has generated “millions of dollars” and created “significant new jobs,” the most recent reports say the company has currently sold $2 million of bracelets, in addition to its initial $5 million donation.

That’s fine, but it’s approximately $58 million less than Starbucks paid Schultz in 2011. Even worse, theSeattle Times reports that Starbucks now employs, 149,000 people, compared with its high of 176,000 in 2008, the year Schultz returned as CEO. It’s one thing to shrink your workforce to get more efficient, but it’s another thing to hold yourself up as a champion of job creation while you’re doing it.

If the company really wanted to use its scale to create jobs, the most natural and sustainable way to do that would be by restoring the number of baristas typically on the floor to the pre-reset levels. That would shorten the wait-time for customers and keep the tabletops cleaner, improving the Starbucks experience and brand, which would ultimately pay off for shareholders.

Danger #2: Distraction. While the emphasis about politics and jobs may be intended to draw attention away from the fact that Starbucks will surely continue to show real steeliness in delivering the promised 15-20% profit growth currently keeping the company’s P/E floating above 30, such distractions tend to ultimately back-fire.

While some journalists love the Davos-lite concept of meshing capitalism with side-project philanthropy, it rarely sticks in the real world. The companies that tend to actually have meaningful, sustained impact on social issues are those who find ways to harness the natural dynamics of their core business. IBM’s“Smarter Planet” effort comes to mind, a sustained approach integrated throughout the company’s daily operations, not coincidentally championed by a CEO who eschewed drama and the “great man” approach.

Schultz can keep pushing the spin envelope as long as Starbucks continues to achieve its ambitious earnings targets. But the minute the company hits a bump, watch for the same journalists who have encouraged the outspoken CEO to suddenly begin questioning his “focus.”

One of Schultz’s great strengths is his ability to overcome tough odds by summoning deep, un-nuanced conviction, and then resolutely moving “onward.” But at this point, his best spin move would be to simply take quiet pride in what he’s accomplished, and pivot his full attention back onto the business of selling more coffee.

Schultz is a true business visionary who has not only created great value for his shareholders, but also arguably led one of the most significant consumer movements of the past two decades. It would be a shame if he ends up being remembered more for empty words than his real and substantial accomplishments.

Ridley Scott, the TED brand, Alien and the quest for Prometheus

Powerful ideas, invention and brand re-alignments, newly imagined. I'm looking for surprise, beauty, spectacle -- designing it, looking at it, seeing it, extending that story -- the telling of it. To tell anything, there has to be another -- the listener. And attention and engagement. Chris Anderson image | Tim Girvin 2006 In the past,…

What story, hi:story? HISTOIRES DE PARFUMS | Blackbird Apothecary –––––––––––––––––– What story, hi:story? Antique Chemistry and distillation equipment, here and below from Girvin blog story: Farmaceutica Santa Maria Novella | Girvin imagery What is the context of history in scent? An answer -- time: the legacies of perfume-making are intimately bundled in adventure [the historical…