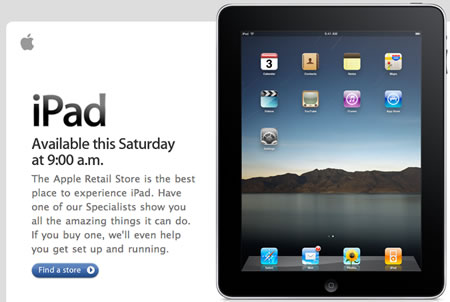 Guy Kawasaki, one of the great evangelists of Apple, along with millions of other MacAddicts and Steve Jobs & Co., emotional shareholders has a question that’s pretty interesting: “The first five million will be sold in a heartbeat. But let’s see, you can’t make a phone call with it, you can’t take pictures with it, and you’ll have to buy content that before now, you were not willing to pay for. That seems tough to me.”

What I find intriguing, in studying the evolution of Mr. Steve Jobs and his brand storytelling on the marketing construct of the Apple iPad, is that it’s surely not a product of mild emotional presence — people either seem to love its premise or they outright hate it. Such bipolarity might be called passionate, to either direction of the swing. Girvin — and me personally — range into the foray of Apple and iPad marketing studies in a manner that is more based on interface, utility and promotional connection, as well as the human story that’s attached to the brand in the emotional visage of Mr. Jobs. Lots has been written about him, on the girvin.com blog. That comes, of course, from the heart of actually working for him, and on his products in a series of life-changing encounters that taught me a great deal about the power of the brand, the story and the person. More here, if you’re interested in that exploration: Steve Jobs and Tim Girvin.

But the polarizing power of opinion on the iPad is just but one of it’s many puzzlements. For my review, the intriguing part might be moving less to the character of the brand product development and nearly more to the passion outcries or hurrahs of the onlookers. Every day, especially today, there are more hoorays and thumbs down than ever. The power of the principle, ultimately, lies in the crowd. The Apple crowd is one of the most powerful collective of evangelists there are — those that will buy nearly anything Apple, since they believe in the cult of Jobs and his brand. Is it a business tool? Depends on who you ask. Is it truly wonderful — or outright terrible? Again, depends on the querier — who’s asking, who’s answering?

What I ponder, in learning more about the character of the brand — is the reach to the foundation of the story, Steve and his teams, the product capacity itself — and finally, how that webbing extends horizontally, to millions. As Guy Kawasaki intoned, the idea of a quick 5 million sales is the beginning — from there, it’s rippling out; will that wave be good, or a backward surge.

The brand story of Apple, the listeners to the flame, will either embrace the telling — or retreat.

Image © Warner Brothers Cinematic brand alignments, at the end of the world. I've worn Oakley glasses for a long time. In fact, at the last adventure, I lost my last pair -- which have probably been around the world at least twice. To the end of considering brand relationships, at least to eye wear,…

Exploring the signature, brand story, the drawn line and den röda tråden I was working in Sweden, last week, with the CEO of a remarkable company, Hästens, and our discussions ranged around the nature of human experience -- from the spirit of sleep, rest and recovery, deep solace and quietude in the brand sentience of…
We use cookies on our website to give you the best experience on our website. By clicking “Accept”, you consent to the use of ALL the cookies.
Do not sell my personal information.
Cookie SettingsAccept
Manage consent