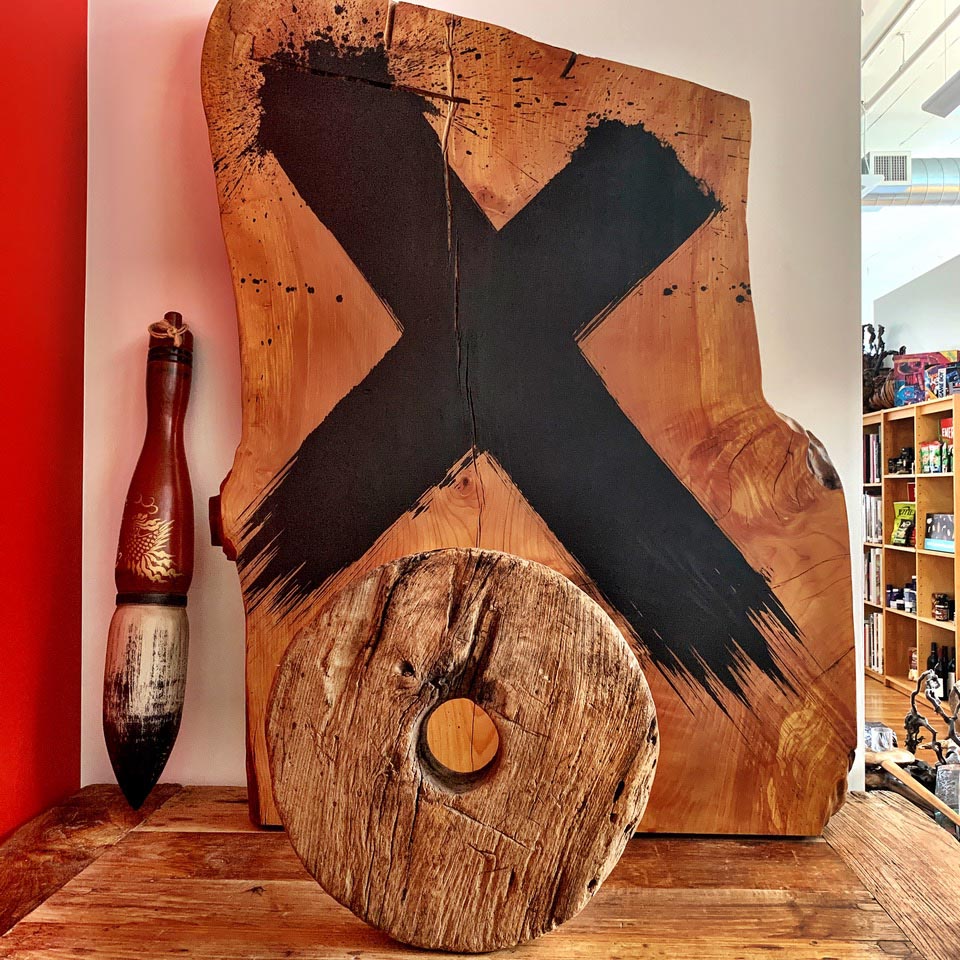 IN THE HISTORY OF A PRACTICE THAT HAS OPERATED CONTINUOUSLY FOR NEARLY 50 YEARS—SINCE OUR FOUNDING IN 1976—THERE MUST HAVE BEEN A LOT OF DIFFERENT STUDIOS, RIGHT?

YES, MANY.
AND MANY MOVES.

That comes out to the following sequence, setting workplaces @ The Evergreen State College, on-campus office during my post-graduate summer associate professor ship and a Eld Inlet studio and library, then Bainbridge Island—then, off the Ferry Terminals, progressively 4 offices [enlarging and reducing—and a jump with Robin & Heidi Rickabaugh] in The Maritime Building—a sidebar creative collab—
ELEMENTS, a Guild-modeled venture with Steve Darland,
Gerald Kumata, & Anne Fisher in the Northwest Industrial Buildings—at Denny Way and Western.

This building-grouping was, back then, the 70s & 80s, a kind of celebrity Northwest Artists haven including, over time—NW art legends such as Alden Mason, William Cummings, Michael Spafford, and Kenneth Callahan. 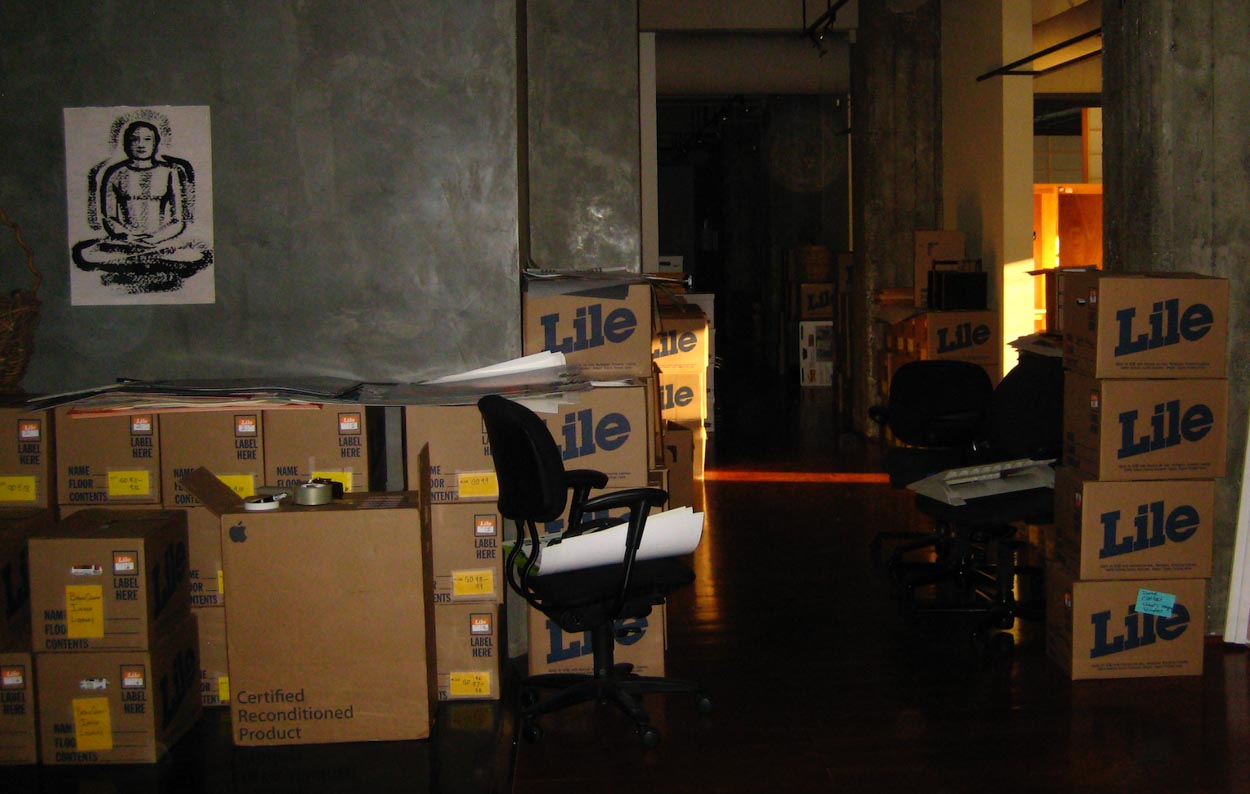 I pushed for bigger, and designing and owning the look of the entire space—or better, still, the entire floor, which was the strategy at 2nd & Pine—at 11Ksq’, the Decatur Island Studios—the beginnings of 30 years of remote work in the San Juans, two offices in NYC—two in a building at 26th & Broadway, one shared office in Paris—on the Seine off Jardin des Trocadéro; and then 2nd & Stewart, then back, decades later to 3131 Western Avenue, along with built-out home studios and libraries at 12th Avenue West & Ruffner, 4th Avenue North & Hayes and Fifth West & Galer, the West Queen Anne Middle School studios and library—
and, our newest, suite 501, from 510.

Literally, down the hall.

In a manner, contemplating all of the moves, they were always about scale to activity—whether working in the beginning, by myself or with teams. I never learned how to “be a designer,” I never took any classes in “Graphic Design,” but I had a theory about how things should look, which is ultimately my legacy of work—mostly built on a hand-crafted bespoke rendering in all things.

Make.
By.
Hand.
And the most impactful skill—I could draw. I could render a broad vocabulary of letters in particular.

Since mostly what I wanted to see—precisely—wasn’t necessarily something I could do—precisely, I looked for people who worked in—and were trained—that space of making things in the manner that I was looking for.

That solitary journey—or being the guy that does everything himself has never been part of my life—ever. I always believed, find someone that can do it better than you, stick with them. So it comes to being out front, as a leader, driving direction. But there is one thing that’s consistent—I work all the time. So wherever I am, I’m working: wondering, wandering and weaving.

Every
where.
––––
I also believe that you can be making progress in any manner that you contemplate—in the creative journey—notes, markings, poems and arrangements,
in—and of—the
stones, leaves and dirt. 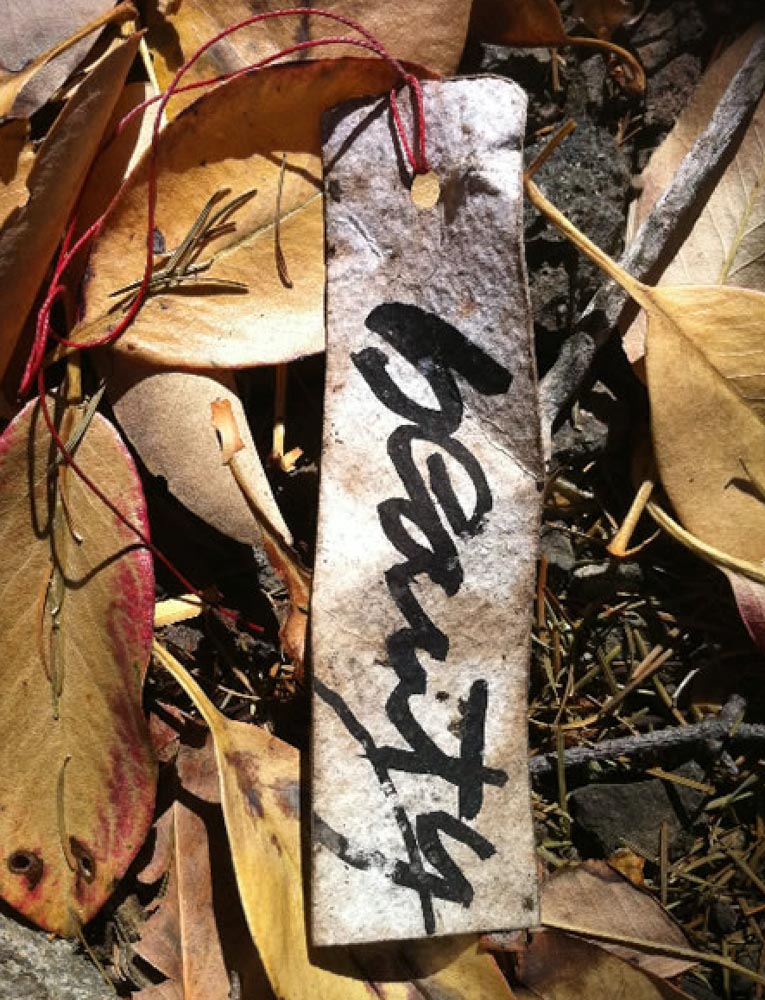 To the nature of “remote” work that we’ve all had familiarity with over the course of the last couple of years, my relationship to distanced work is far longer—decades, actually, towards the idea of working, roving, writing, designing, building strategy or tactical planning somewhere other than the office(s) downtown, or around people. Being with people is critical—to creative collaboration, being away from people is equally important. The verse of conversations are counterbalanced in the silence of directed attention.

I have the following contemplations—written in 2010—on working remotely: 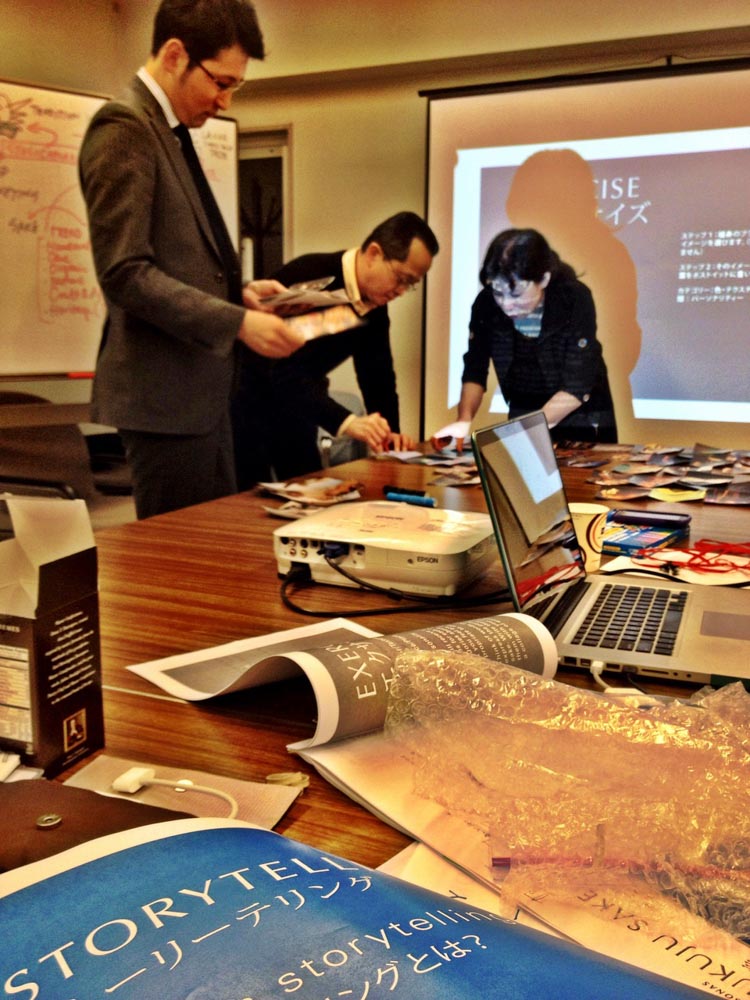 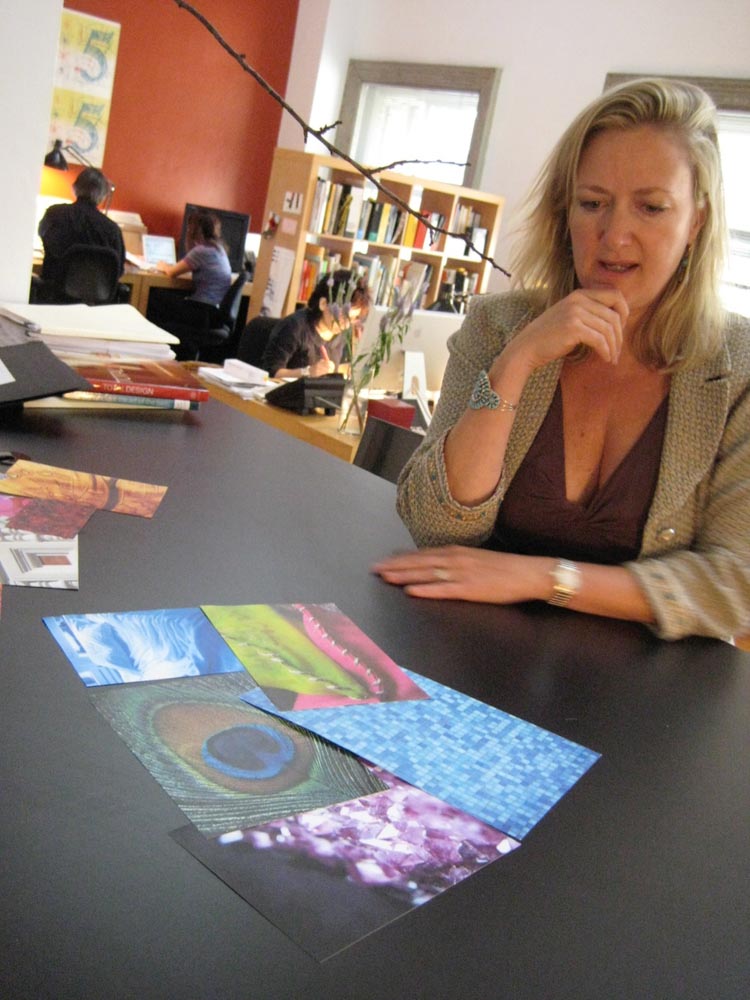 1.
The idea of doing something with, and around, people is important.
It teaches you the manners and etiquette of being with people—and communicating with them.

I find a surprising lack of skill among some, in this simple gesture of connection—listening, in particular, and knowledgable, leadership guidance in presentation, meaningful organization of ideas—and the expression of them, live: eye to eye.

There are huge advantages to connecting with people live: eye to eye. You can sense more to who they are—if you can truly see them. I’ve noted an increasing tendency among colleagues that sending an email or text is sufficient to assure connection. I get emails from employees, when I’m only a matter of feet away, rather than stopping by to ask a question or confirm an approach. I then might see the email at 10.00pm that evening, and completely miss the question, the timing, and the answer. That goes for me, too.

What that says is that it’s far better to be linking, quickly to comment,
then to presume that electronic media will suffice.
That is, when you’re there. 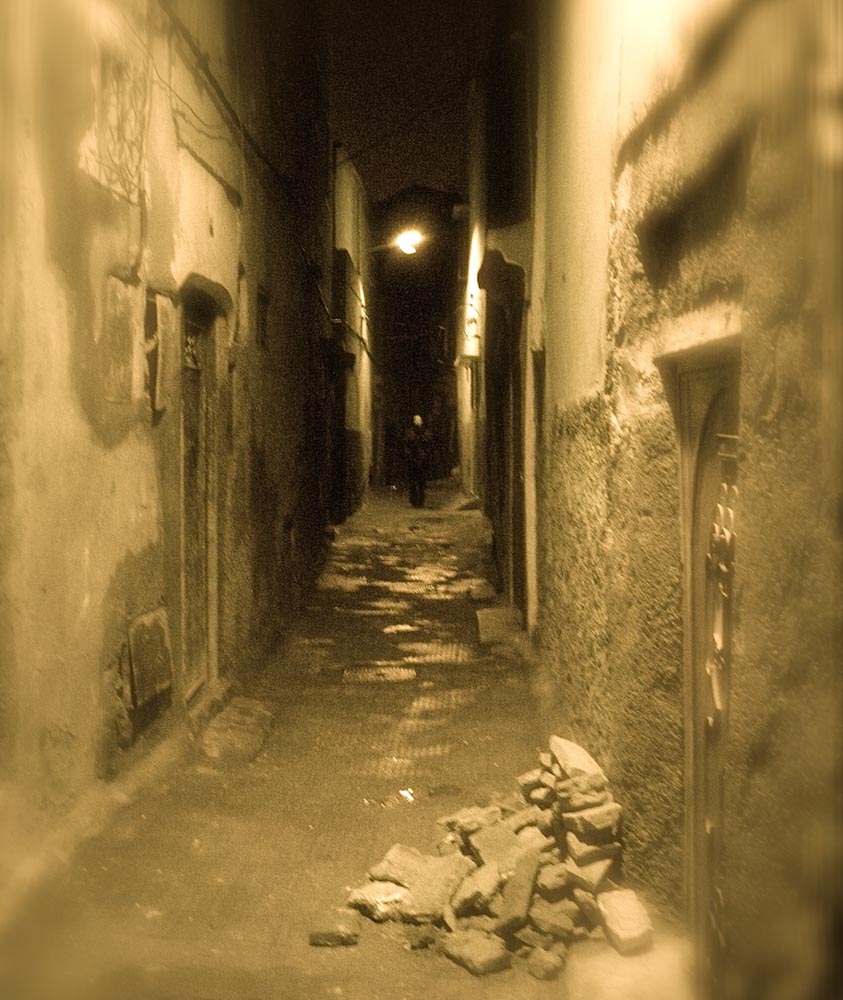 2.
The idea of doing nothing with, and around, people is important.
To the concept of seeking organizational solitude, I find that days will pass in my attempts to write out complex strategy, written documents for messaging, planning for complicated communications or interview and brand auditions. Finally, I will head out—to be somewhere alone, take a brake, and seek the quiet of focused contemplation. I’m still linked-in, everywhere, but I’m not surrounded by pressing issues that constantly distract my focus. 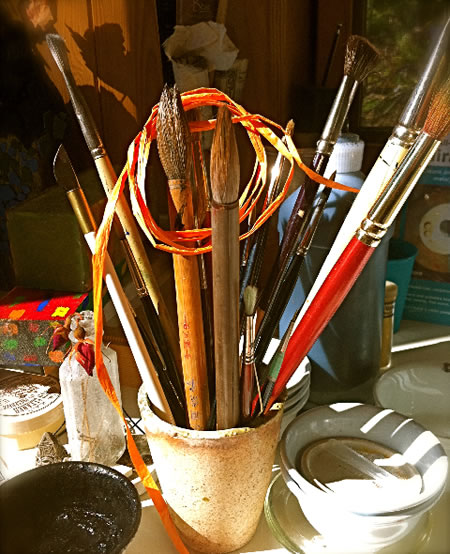 A fresh set of tools to work with—perhaps completely non digital, explore and dig-in to
for differentiated explorations.

Returning to the notions of attention and intentional action, the idea of taking the time to be away, working remotely to the scene, allows for that sense of continuous attention to the multiplicity of actions that are tied to doing the work, to running a business (which can be like sprinting, it would appear—there are not a lot of respites) as well as the centering tasks that need to be directed as part of the premise of refreshment. That presumes that you’re roving in a manner, or working remotely in a way, that allows you to be a sentinel of what’s happening—where you are not present. There’s something, as well, to being remote—working remotely—and really not being connected at all. Work and be silent.

It’s been years since that’s happened to me—being remote, and completely without cognizance of what’s happening, at Girvin, with clients, relationships. I don’t see that as something that’s happening soon—except, superficially, in the construct of Covid, where remoteness was de rigueur. 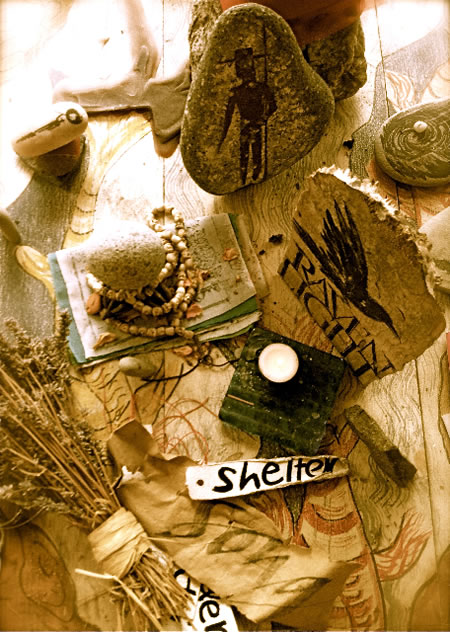 Some meditations on remote work:
• Contemplation, should be seen, in scene, in the context of the original etymon of the word: “with temple” —from the Latin, con + templum. Think of your remote work as specially distinctive—something sacred, to be cherished and held as an embraceable ideal.
• Create a special place for your remote work. If you must work away, as many of us have been— or have the special chance to do that—create a special way in which that character can be savored. Remote work isn’t a permanent scenario, it could be seen as irksome—since it’s lonelier. But too, it could be seen as a momentary ripple in the time of being, since we all know that we’ll be returning to the flip side of complete and protective remoteness, to opportunities to share live, explore life-working scenarios that are hands-on, hands-in, collaborations.
• Think of the remote mind. Considering the original meaning of the word, remotus, from the Latin, seen and heard in the 15th century—it was about being “removed”—to move back, and away, from something. That remote viewing allows you to be seeing, and thinking, about problems in a way that’s distant. I call this—since 2010— walking around a problem—in the manner of circumambulation, more specifically, a circumspection — you’re seeing it from varying perspectives.
• Bracket time for silence: sometimes, to remoteness, it’s all the more reason for everyone to want to talk to you. Be quiet, retreat in silence. You can always think better when your mouth isn’t working. 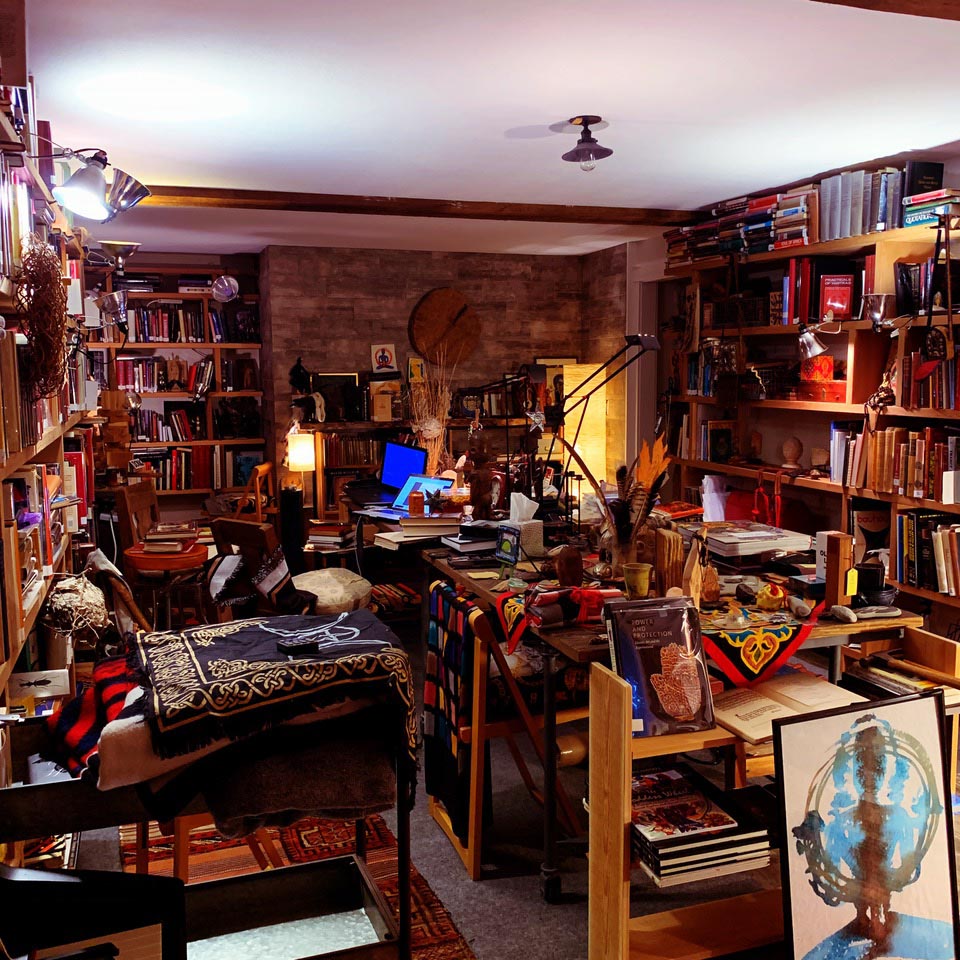 Sometimes being the warrior of the way, being incessantly on the road, you must be the remote sentinel perpetually. Standing in airports, seeking a plug location for power, I listen to people simply trying to make connections—even frantically: they’re trying to get home, metaphorically.

They’re trying to find a home where they can be. As a worker—in the space of intentional knowledge your home will be where your heart is; that’s where the best thinking will percolate—and others will benefit in the rippling of your refreshed ideas.

Remove yourself from the fray, and perhaps you might see better.

TIERING MESSAGING AND LAYERING OF INTENTION IN BRAND NARRATIVES AND STORYTELLING In my earlier work as a calligrapher and lettersmith, I explored—and still study in our work—the idea of layering messages. I see this as a kind of palimpsest—letters on one tier, a sheath of meaning, that overlays another, and perhaps another, that lies beneath…

VISUALIZING INFORMATION AS A STORY In a recent grouping of discussions, with a late 19th century-influenced designer, innovator and color theorist, we talked strategy and the tiering of information—in her brand-building around the presumptions of color gravity: the attractiveness of carefully-orchestrated, even seasonally-inspired palettes, and the layering of informational content and color—how could that experience…
We use cookies on our website to give you the best experience on our website. By clicking “Accept”, you consent to the use of ALL the cookies.
Do not sell my personal information.
Cookie SettingsAccept
Manage consent