The idea of attention 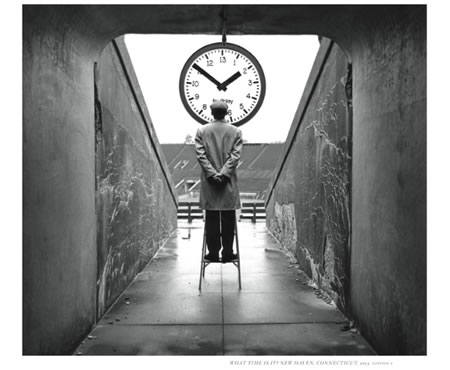 Exploring the concept of storytelling, and the nature of attentive reception: brand, life and design.

Returning from a design summit, in Florida, there was a series of conversations about passion, commitment, brand drive. And the work of design. Connecting with the students, that idea drilled in — what passion will, shall, must drive them, in relation to the work?

In telling a story to someone, any kind of person, any kind of company, it’s about attention. What are you paying attention to? What’s the story — and who cares about it? The idea of storytelling, while inherently the current branding rage, is something that we’ve been walking around ( in circumspection ) for nearly 15 years, and probably double that time in actual exploration and usage, without really calling it that.

Sometimes, it’s really about how people listen. They don’t listen to facts, they whiz by in the distraction of sheer clutter. I’m the worst reference here. I can recall varying employees saying — “don’t put Tim there, he’ll be looking out the window during the presentation.” And they’re right, I do.

But, I’d counter that my concentration has moved onto another thing. There’s a name for that.

When it comes down to it; the real challenge is embracement — what’s the holding factor to the link of the embrace of person to brand, person to story, person, for that matter, to person. I’ve written about attention in the past, in the context of a brand and a person. Marc Jacobs, attention, Louis Vuitton. Curiously, I had a mysterious conversation with a TED person, trying to link up with people before one of the events. I found one. And, rather that have a live, eye to eye conversation, this person preferred only to speak in the digital voice. Never connected, never met, never linked to her. Speaking of attention, it was my impression that she was really only interested in one thing — attention to herself and her research on mobile device and digital “distractions”. Living in that world, everything is a distraction — from that standpoint — from the screen. Fascinating to me, as well, the idea that Microsoft is spending so much time on finding ways to avoid distraction, presumably from their hardware applications. 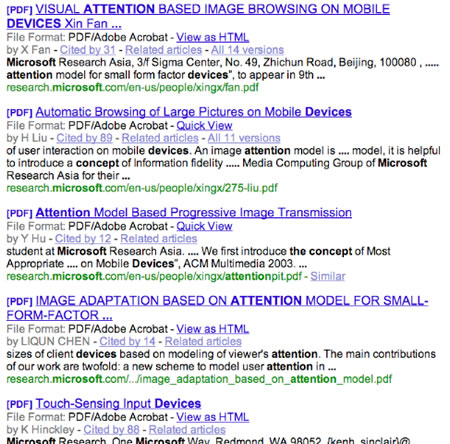 Of course, it goes on and on. As I’m wont to do, I dig in, exploring more on the front of the workings of the idea of attention. Focus — being at the center.

Let’s think about that word, for a moment. Focus actually reaches to the conception of fire. The warming place — hearth place, the center of the house — following on:

L. focus “hearth, fireplace,” of unknown origin, used in post-classical times for “fire” itself, taken by Kepler (1604) in a mathematical sense for “point of convergence,” perhaps on analogy of the burning point of a lens (the purely optical sense of the word may have existed before Kepler, but it is not recorded). Introduced into English 1650s by Hobbes. Sense transfer to “center of activity or energy” is first recorded 1796. The verb is first attested 1814 in the literal sense; the figurative sense is recorded earlier (1807).

When I was first working with Lloyd Reynolds, Reed College, and we explored the idea of the concept of centering — hitting the clay perfectly in the center of the spinning, forming pottery wheel, for the making of clay work, we talked about that idea of looking at the centered edge of the drawn form, exploring the movement of black in white, spinning clay, water spiraling.

That idea of attention is an older proposition in terms of the discussion of the strategies of psychology: William James, about 110 years ago (James, W. (1890). The Principles of Psychology. New York: Henry Holt, Vol. 1, pp. 403-404.) proffered “Everyone knows what attention is. It is the taking possession by the mind, in clear and vivid form, of one out of what seem several simultaneously possible objects or trains of thought. Focalization, concentration, of consciousness are of its essence. It implies withdrawal from some things in order to deal effectively with others, and is a condition which has a real opposite in the confused, dazed, scatterbrained state which in French is called distraction, and Zerstreutheit in German.”

And there are surely levels of attentiveness, that can be broken out in the following summaries. How I pay attention is in there. Who would guess a positioning? Where is Girvin’s attention span?

The concept of attention and what it means to any of us, is whether what we are doing intrinsically can be embraced and linked-to happily. We are at the center, the happy place, the hearth of the mind. In speaking at an event in Florida, yesterday, my presentation was dislodged by technological foul-ups. One mis-launched DVD, with no sound, then late, then another mis-guided repair, the calligraphic piano track — I had to completely change the structure of the presentation. Disappointing – but still successful for some. The real point read to the nature of the history — for me personally — on focus. I realize that the idea of “alternatively directed attention” relates to this phrasing being pointed at me, since kindergarten. But really, the thematic character of the conference was just about that — 2010 Sarasota International Design Summit at Ringling College.

Attention, what relevance to us? To you? What I might reference as an exemplar to action is the nature of focus in the work that we do. But more importantly, how that works in our relationships. What’s the power of your relationship to the work (or the community)? What passion drives the movement of your connection to the practice? Consider this idea of the attunement — a reflective move, from you to the work, and from your community back to you. Of the work that you’re doing. And how that links to your audience. An attitude of reflectivity — mutually beneficial embracement. 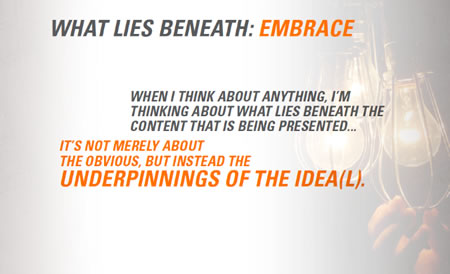 At the conference, speaking back to the history of the work of the firm, it’s a consistent positioning of attention, focused leadership, impassioned commitment. From Tom Ford to Steve Jobs. 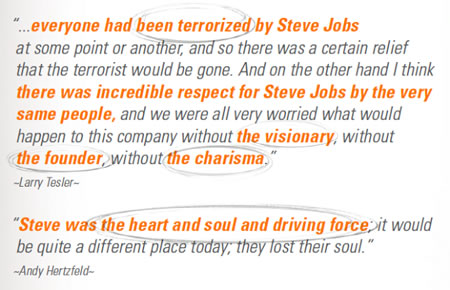 To just about any focused and impassioned leader that I know, or have had the opportunity to partner with, that proposition runs as a true blood — the culture spills that story. It might be a little maniac — sometimes wavering, an uncertain meander — but that obsession is nearly consistent in all my experiences. Linking in to the thread, that song, that sequence of notations can be in the center of experience — working like newly molded clay, slipping in the fingers as the world whirls round.

Focusing in, just that — at the center, the heart of the story that is ever being told.

Attitude, growth, solutions, strategy, design, charisma, trend leadership and responsiveness. Brands that live and brands that die. There's a curious challenge in the realm of celebrity brand development. Some evolve happily, growing, selling up, selling out and moving onwards into their own reach of market place. Working with the founding team of Urban Decay, Wende…

Observing the passage of the brand, as fire, in the spirit of Alexander Lee McQueen This is the another in a series on Human Brand | defining the inextricable link between people, founding vision and the brands that they produce. When I heard of the passage of Alexander McQueen, yesterday, I -- like many in…
We use cookies on our website to give you the best experience on our website. By clicking “Accept”, you consent to the use of ALL the cookies.
Do not sell my personal information.
Cookie SettingsAccept
Manage consent