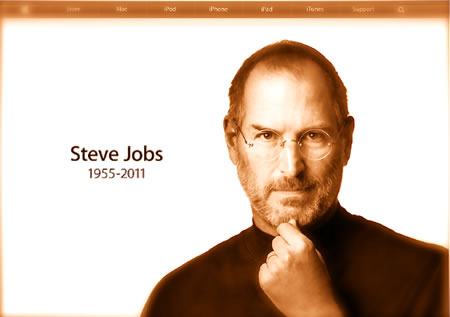 These days, I’ve been writing, talking, consulting in the proverbial strategy — a great deal — about the invention of new pathways in brand development. And there are more coming: notes, meditations, practices and mapping approaches. But in contemplating anything to the new, the wow, the wonderful — Steve Jobs has to be in the clause.

JUST NOW, weeks after that passing,
it’s still a fresh meditation.
He exemplified the spirit of wowness — fired with the passion of making amazement. “Incredible,” he’d repeat. Because it was. And he believed in the incredible — that which sparks out, beyond the known, to something embracingly unseen, enchantingly magnetizing and…

To make it happen, it’s always one person circulating to many.
How to lead — teams — in finding the newly sparked fire of connection, interplay, conscious interlacement and the evolution of brand story and the novation of transition and market expression.

To reiterate stories, this memorial meditation — my connection to the flamethrower mind of Steve Jobs, happened in two sequences — one, hanging out at Reed College as the new wild calligrapher / designer linked up at Lloyd Reynolds house, somewhere just off campus. Lloyd was the inspiration of certainties in design, (through his student, teacher Robert Palladino, former Trappist monk and early calligraphilic) for Steve Jobs — he was the maestro of the zen-stroke — asian art, mysterious wabi sabi‘d = yugen, the interval of ma respite, simple power shibui — soul culture of the letter form. Lloyd preached the majesties of beauty, discipline and the founding philosophy of eastern and western art. “Didn’t you know, art is higher — that really all extraordinary art comes to the worship and making of — the divine?”

But divinity can surely be one man’s beauty and another’s God. And such as it was for Lloyd — “making things right and beauty full” and Steve Jobs — who saw in the Reed College plethora of pretty posters and letter-pressed printed / calligraphic-drawn broadsides a respect for the letter — and the beauty made of it. One, a teacher of marvels, and another — Mr. Jobs, that looked and listened and turned the path of that magical stepping stone — and the strides that came with it –
to something wondrous and remarkable.

That idea, that type could be a beautiful thing was an inspiring and lovely sentiment — something unforgettable; and it was in that potency that I’d synced with Steve at Stanford University (the Conference On Design) — and mentioned to him live — “hey, what about Lloyd Reynolds, Reed College — did you remember that person?” And of course, “yes, unforgettable,” said Mr. Jobs. That went to — “here’s what I’m doing — playing with tools, brushes, strokes of metal.” And then, the second path — “why don’t you come down to Apple — I’ve got something to show you.” That was the M.A.C, the Macintosh, the McIntosh apple — and the “mouse” activated computer.

“Question is — can you draw with this?”

Drawing with a cursor, back then, led to unspectacular results. I drew Macintosh logos with a brush, on polished stock, with Japanese fudé. I drew the computer, as well — a pretty little box, a little stock, but durable and forwardly solid. That went on to packaging and other brand stories, Girvin, Apple, and various relationships — down the lineage of Apple inventions.

I did stay in contact, in construct, with Steve Jobs; we came, he left — Sculley came in. We synced with Jobs at NeXt — then he was back — and we kept working with Apple, the WWDC — for four years running; there was “Apple INTERNET: LIVE!” – there were educational initiatives, some store design, merchandising, collateral — interiors, even an Apple / Girvin ad (which someone just posted). Mark Mothersbaugh from DEVO commissioned Girvin to design a massive computer installation on a building in LA. From there — we kept rolling; Apple vocabulary still found a deep and abiding connection to Apple thinking. We wrote lots about Apple. And Mr. Jobs.

Thinking about Steve, working with him, was a mix of terror, aggressive pathfinding, focused energy and astonishment. While others voiced the “terrorist” claim, I never personally experienced it — Jobs was more to the phrasing — “here is what I’m looking for, make it happen.” We did. The continuing red thread of passionate consistency, coherency in ideals — what the Swede’s taught me: den röda tråden – the red thread that goes back into the very heart of things, running out the snapping line of fired ideals. That pursuing [building, wild and storming] flame is something that speaks to the nature of Steve’s drive to the new real; seeing something that others don’t perceive in the collective sight, in the amalgams of how people could use things — how software, hardware, experience entities could be newly melded into another ideal. But to get there requires fire — and throwing out the flame; in my experiences, that sense of fiery encirclement was profound. As Apple friends intoned — “you’re either in the ring, or out of it.”

The journey of being in the circle, learning, listening, observing, connecting taught me the most unmistakable lesson. Passion = life; you’re either on fire “it’s incredible” or you’re asleep. To this day, I’m sensing that in the channels of journey and experience.

An honor, Steve. A grace — your passion to the world — this gift.
The new comes with the commitment to wow.

TSG | SEATTLE
…..
GIRVIN | THE LEGACY OF STEVE JOBS & APPLE
DESIGNING IMAGINATION : AND THE TOOLS TO MAKE IT HAPPEN
http://bit.ly/gFldge

The Scent of Man

Exploring the Place of Masculine Fume: the Mind, the Memory, the Mystery of Maleness. There are those that might propose that any man being preoccupied with the idea of scent is a fool. What comes to mind is the self-styled buck that gets on the elevator wafting a broad dose of Polo. Or the hyper-sensitive…

The Fragrance of Blood ROUGH PERFUME TRADE #1 The Perfume of the Most Primal Liquid -- the Scent of the Sanguine (The first of three essays on unusual scent strategies) I pricked my finger while I was sewing a torn shirt, and put the wounded in my mouth, to stop the bleeding. Taste. And scent.…
We use cookies on our website to give you the best experience on our website. By clicking “Accept”, you consent to the use of ALL the cookies.
Do not sell my personal information.
Cookie SettingsAccept
Manage consent