The strategy of the menu — designing storytelling and brand experience: the starting point.

How to plan and design a menu? 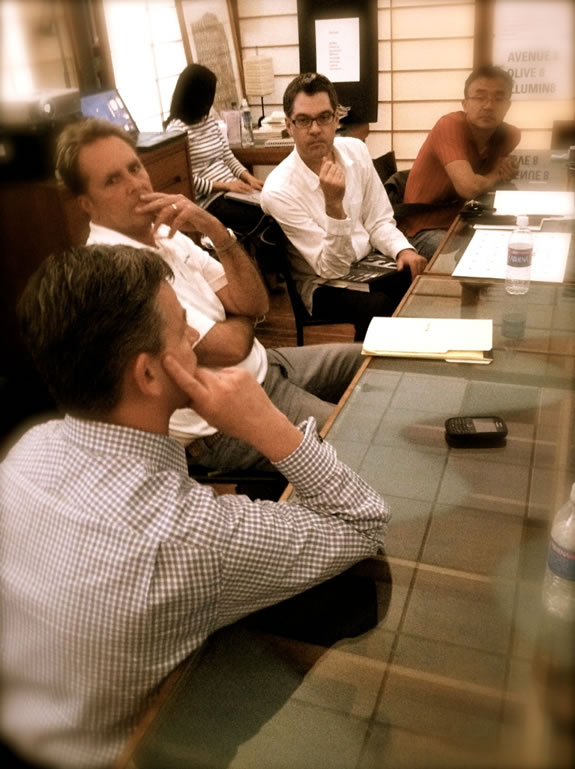 Key is close collaboration — and knowing the diner, the experience strategy, the character of illumination, stylistic consciousness, and the budgeting of items in relation to the financial strategy of the brand. 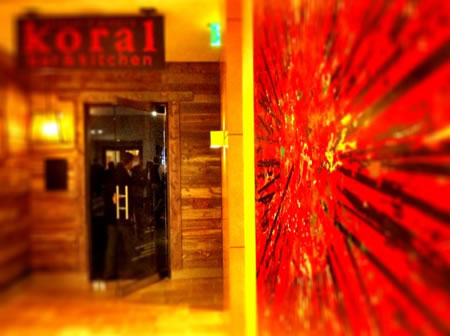 A menu, like the procession experience — the guiding route into a restaurant — it tells a story. 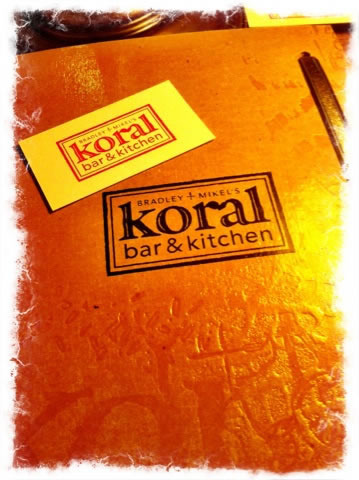 Designed to be holistically synced to the system — Koral experience design.

In our experience, working directly with chefs, like Bradley Dickinson and operational strategist Mikel Rogers [shown above,] co-founders of Pearl and Koral, as well as our earlier work with Kerry Sear, Four Seasons — Terry Heffernan in NYC, partnering with team leaders at Schwartz Brothers [on a string of their restaurants]– even talking menu concepting with legend Sirio Maccioni, during our times working with him in NYC — the messages and languages of the meal offerings are a tightly studied affair, coupled with thoughtful detailing on how the meal should be organized and described. The menu should be an attribute of a holistic expression — disciplined to align to the language of the brand. 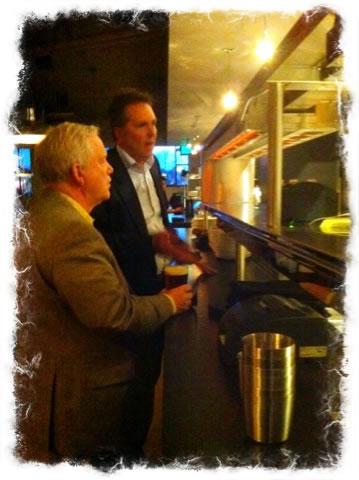 Any good restauranteur knows how to talk up
the story of his brand, his experience offerings —
and will be the key architect of the menu

What is the scale of the menu means not only how big is it, but how does it fit on the table? To size and placement, would it be contained in the examined and planned perimeter of the diner’s experience circle? Or is it large enough to stand outside that ring of connectedness that a diner feels in their place at the table, with co-guests and in the larger intimacy of their sensation in place? 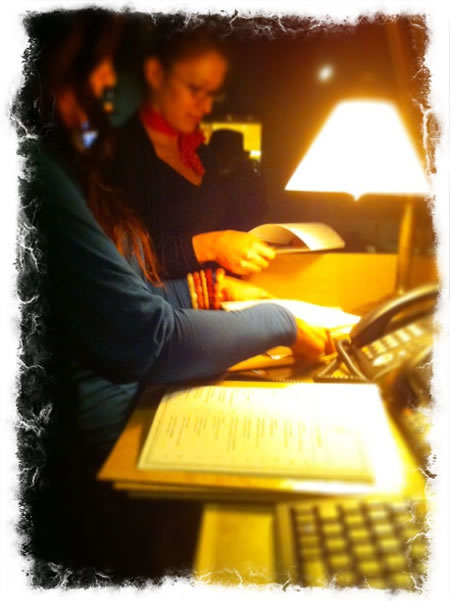 Team preparing the beginnings of the experience,
daily-built, customized menus and messages to guests.

A big menu is hard to deal with — and can become a kind of guest barricade — let alone staff management of big bulky folios. If the menu is exquisitely small and precious, too tiny, and people will literally bring out magnifying glasses, lighters and penlights [or tipped table candle lights] to simply see what’s been offered.

Printing ease, and paper template formatting, is another critical concern — to the nature of daily offering changes — in our experience, we often will spend time working closely with restauranteurs on their IT / print system to assure that our planning and designs are easier to manage — hands on, they can be rebuilt easily, every day.

Below, see another published overview, some added comments to explore —
ranging from structure, language and design,
gathered from perspectives all over the US,
restaurant-side, consulting-side.

Restaurants’ menus are more than just lists of dishes
Words that make mouths water are vital to an eatery’s success.

BY MARY BLOCH
Special to The Star

Along with satisfying food, these distinguishing elements might subconsciously draw patrons back to a restaurant.

Of course, menu design experts know that restaurateurs and chefs aren’t always as caught up with the menu’s look as they are, and it’s easy to understand why people running restaurants are more focused on the tangibles, like the preparation of dishes and the selection of ingredients. Yet the feeling that a menu or a memorable logo can generate is often just as important in determining a restaurant’s ultimate success.

In a society approaching information overload, deciding what to edit from a menu can be tricky.

“I want people to have what some would consider too much information,” says Ted Habiger, co-owner and chef of Room 39. “Sometimes when I’m dining out, the meal is nothing like how the menu reads. And sometimes it reads better than it actually tastes. That’s a pet peeve of mine. I try to write the menu so you can practically taste the way it’s written, and you’re not going to be surprised by it.”

At the other end of the word spectrum is Carl Thorne-Thomson, of Story in Prairie Village, who labels himself a minimalist. “I just put key words down and let the diner begin to imagine what the dish will look like,” he says.

His approach works as long as the servers are well-versed in the menu. “If you leave a bit off, it serves as a conversation starter at the table with the restaurant representative, allowing the server to interact with the diner,” he says.

As a general rule, the design experts suggest that if a restaurant’s fare is simple or casual, the menu description should be as well. They also advise that a menu not be cumbersome. Some upscale restaurants use too many words and more flowery language than a diner cares to digest.

Tom Sietsema, the longtime restaurant critic for The Washington Post, has read his share of restaurant menus. After all, he eats out 12 to 13 times a week. “There are so many ways to pull readers into a menu or turn them off,” he says.

Sietsema is not a fan of surprise ingredients that people tend to love or hate and that are in a dish but not listed on the menu. Cilantro, for instance, repels some diners, while chocolate usually excites them. His point is that patrons should be made aware of these types of ingredients before placing their orders.

Nor should the importance of adjectives be underestimated. Sietsema recalls Danny Meyer of New York’s Union Square Hospitality Group using the term “torpedoes” and “rockets” to illustrate how menu descriptions can sway restaurant patrons.

Rockets are adjectives that attract diners. Examples are “grilled,” “homemade,” “organic” or wood-roasted.”

Torpedoes, on the other hand, are descriptors that keep people from ordering a particular dish. “Crispy” might indicate that the item is “fried,” while “poached” or “steamed” might lead diners to think the dish is boring or tasteless.

Increasingly, seasonally driven menus tout locally sourced ingredients that are available for a month, a week or a day, depending on supply. Room 39 highlights the purveyors of its produce, meats and cheeses. And just how these locally sourced foods are positioned on the menu is carefully considered.

“We don’t put it all over the menu,” Habiger says. “The top part is dedicated to one farmer every five or six weeks, and there’s an ever-changing list of our daily sources on the side.”

When executive chef Dan Swinney arrived at Lidia’s, it was during the pre-computer revolution, an era when it took two months to get a new menu typeset, proofed and printed.

“Technology gives us the flexibility to print our menus in-house,” he says.

Lidia’s produces special menus in-house all week. Monday night is Meatless Monday, Tuesday is Tuscan Grill, and both of those are produced that day based on what the chefs decide to cook. The restaurant also produces private party menus, customized for each event.

“It’s amazing to me that more people don’t update their menus daily now that it’s not a big deal to do it,” Room 39’s Habiger says. “We can just take a dish off the menu if we run out of certain ingredients, and if there’s a typo, it’s gone in 24 hours.”

Menu designers Riccardi and Bologna strive to give their clients similar flexibility by providing a menu template that the restaurants can update themselves as often as it suits their needs. But chain restaurants are typically not as nimble as independently owned restaurants.

In the early 1990s, Trabon developed a centralized menu data management system that allows clients to go online and manage each version. Since Trabon has both print and technology divisions, it can match its clients’ menu information with an interface to increase accuracy and consistency for all locations, an especially critical feature now that more states require nutritional information printed on the menu.

Ultimately, menus can be an important real-time tool for a restaurant’s bottom line, which is why Robert Sobieraj, instructor at Johnson County Community College’s Culinary Arts program, teaches his students how to cost out a menu. “It’s your profit plan,” he says. “You have to be sure that what is being ordered will make you money, or you have to make some adjustments.”

Sobieraj drills into his students the necessity of changing the menu daily as a way to control costs and react to market factors like inflation, a drought or what’s in season. “The smaller the menu the more control you have over expenses and inventory, and the better your ability to prepare the actual items on the menu,” he says.

Story’s Thorne-Thomson knows he’s making his bottom line when the entire menu line-up sells well. “Not all of our dishes will be best-sellers,” he says, “but we sell enough of those to keep them on the menu for diners. … And if our patrons like what we’re doing for the most part, they’ll keep coming back.”

But perhaps the best barometer of whether a menu is doing its job is when patrons sneak them into their purses. “I knew I had succeeded when customers started stealing the menus,” Bologna says.

Mary Bloch is a freelance writer who lives in Kansas City. Her blog is AroundTheBlockKC.com.

The immediate illustration of place and being. Finding the moment, in momentum Image above, an instant | Jakarta, Indonesia | Girvin I contemplate the instantaneous -- and the drawing out of the drawn, the painted or scratched statement of the moment, closely seen, first off the finger. When I was in high school, I met…

When I was in Bhutan, high in the misted Himalayan mountains, I'd spied a remote monastery and spoke to my guide, Tsewang Nidup about "getting up there." We did get up there, like nearly every other lonely vista we aspired to summit -- centuries-old crag-balanced meditation retreats, nunneries, community gathering places -- the Dzong, roadside…
We use cookies on our website to give you the best experience on our website. By clicking “Accept”, you consent to the use of ALL the cookies.
Do not sell my personal information.
Cookie SettingsAccept
Manage consent