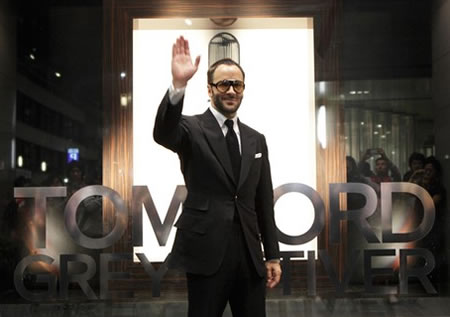 Obviously, I’ve got a thing with Tom Ford. There are layers there. One, meeting him, talking to him, interviewing him — and learning from him. And two, there’s his team — people that I’ve variously come in contact with, over time. That might be Frederic Fekkai’s wife, Shirin Von Wulffen, who I met and worked with at Yves Saint Laurent; and that might be Cori Galpern, formerly at Gucci, who’s now running his international PR efforts. There’s Lara Modjeski, who’s coordinating his design and product development, that I met first at Gryphon, and later at Ralph Lauren. All exceptional people. But Tom’s the one that’s the most intriguing and fascinating, mostly because he’s living the story of the human brand model that I’m so taken with exploring.

My love of the notion of the human brand comes from that word. Love. That is, any real brand has a person at its heart. The person that creates a brand needs to be in love with the proposition — and it’s the telling of that story that builds the community around that brand. People are magnetized by passion — it’s a bewitching and intoxicating vibration. Brands are rippling entities — and the beginnings of the pebble drop start that mythic unfurling of vibrations that extend — from one, to another, to another. There are metaphors to considering the notion of the brand — from fire, to scent, to sensuality, to the rippling outwards of expressions and stories. But in a way, they are aligned in the notion of the spread — either wafting, or rippling, or extending radiantly — like some electricity — even to the allegory of infection, they all relate to the nature of compulsion (etymologically, with the pulse — and like compel — they swing, beat, throb). The (e)motion makes it.

Tom Ford, to my interview in Miami, is all about passion. His current modeling, if not his entire legacy, is about passion; and his present brand framing really speaks to creating something that — to his take — isn’t in the market; he’s making clothes for men now that are clothes that he can’t find. And if you go to his shops, scattered around the globe, you’ll see what he’s talking about.

Now, to women. Tom’s exploring — rather returning — to the feminine side of the design equation; and we’ll see what that brings. More, to this sentiment, will be forthcoming in the coming months, according to his recent interview with WWD, in Tokyo, at his shop in shop launch at Isetan.

On the nature of his other offerings (aside from his film work recently), which rings from the varying accouterments of fashion, there is his work in scent. Scent, of course, is one of the most challenging places of sensual brand experience that anyone could hope to broach. Tom is, too, a lover of scent — and part of that drive comes from an early alliance with Lauder — particularly Aerin Lauder’s support — of his development of a series of perfumes, pardon — fragrances — that bear a consistent tint of his persona. That is — as a friend puts them — they are “high”. How one might take that is that their notes, in the sonorous sequence of how fragrances touch the mind and memory, are garlanded with scent notes that are slightly higher pitched — they are intense. Still, Tom’s work as a materials conjoined in a way that is direct and powerful. So too, his fragrances. Some might say, for example, that his Tuscan Leather, from his masculine grouping, is simply overwhelmingly powerful — it’s Tuscan, it’s leather, it’s strong. Touch that, and you’re smelling it on you, around you, for a while. Whereas other scents might dissolve in heat, Tom’s last. And I believe that’s part of the memorability of his strategy. That’s not to say that other of his scents aren’t imbued with lower base notes of earthiness and masculine firmness, but that they are contradicted with notes that belie a higher and more feminine over note — like a melody that’s just chiming, slightly out of earshot.

Vetiver, the scent, is very much in use in many men’s fragrances, and some — like I — relish the dirtier, even smokier character of the vetiver place of scent phonics. Personally, I create my own, using Guerlain’s basic classic, Vetiver — touched with the addition of real vetiver essential oils, the raw materials that are derived from the plant itself. This gives me, my scent, an even deeper character that I like — smacked with some birch tar, perhaps some tobacco, a hint of geranium, it’s even more complex. Perhaps too much. But vetiver — the plant, the scent — the basic quality has been my scent for more than 30 years. 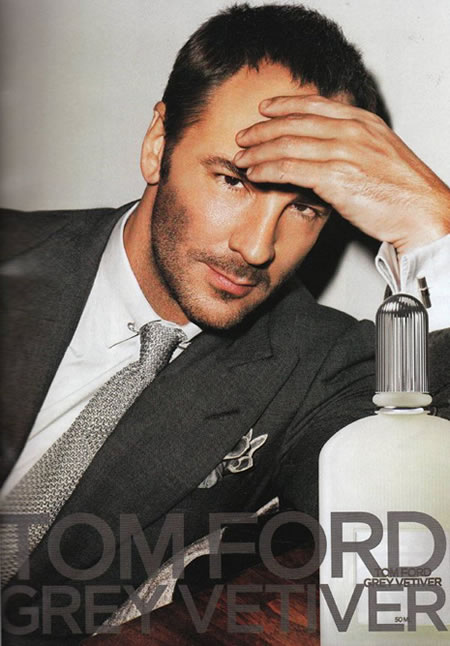 There are some reviews, on the nature of Tom’s Grey Vetiver, that you can find in this sequence of observations. And if you’re not familiar with studying and reading about scent, then you’ll find this intriguing. For learning to listen to a scent — waltzing through the layers of the discovery in how scents are built, and run into your memory of deeply hidden earlier exposures to fragrance (or any kind of “smell”) can unearth psychic complexities in your sensation — literally — of experience. Observations, then: Basenotes; Perfume Shrine; NTS; ManChic; and, among a host of others, Sorcery of Scent.

Vetiver smells of dirt — a fertile earth, hinted with grasses or hay, and perhaps some other curiously dark flowered scents, perhaps dead or dried foliate matter that has been excavated from some ancient, eastern tomb of an exalted and mystical ruler, lain subtly dormant for hundreds of years, now mysteriously revived by the heated glance of the sun, newly oxygenating their molecules. Literally, however, everyone’s got their take on how scent “smells”. Woody, oriental, earthen. Just read the reviews, to hear how each scenteur, pardon the invention, extolls their personal take on the sequencing of the notes — from admiring, to nearly jeering and spiteful.

There’s real emotion in scent. Fragrance drives one mad. Scent hauls us back to primeval subconscious states of being — and for most of us, we hardly even notice it. But once you become transfixed by the art of scent, then you follow your nose to dreamy oblivion.

And so it goes.

For me, the going is about the beauty of the human heart, the heat, at the center of the brand proposition — that, like all the sensual elements of holistic experience design, resonate back to the center and hopefully, that same resounding call moves outwardly, in whatever metaphor one might savor in personal poetic mindfulness.

A beauty full thing to witness.

Go here, to learn more about Tom. Fascinating person, to say the least…

Humanitarian Brand Development | Cause Related Marketing Development -- it's all about love.

Better than a store, you can eat there: Microsoft Café Exploring a new conception from Microsoft, a café in Paris -- to be short-lived, yet an interesting telling on the principles of relationship development. But, Windows 7? Imagery sources Like good storytelling, the message begins on the street. 47 Boulevard Sebastopol I've written about the…
We use cookies on our website to give you the best experience on our website. By clicking “Accept”, you consent to the use of ALL the cookies.
Do not sell my personal information.
Cookie SettingsAccept
Manage consent