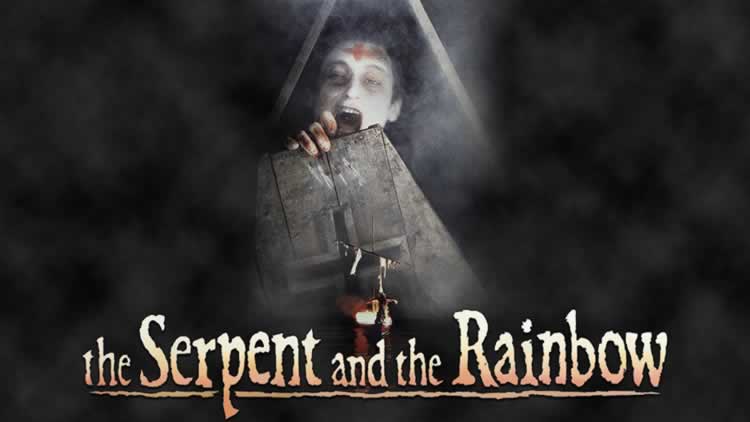 THE DESIGN OF THE SERPENT AND THE RAINBOW.

Isn’t it so that
there’s
a
pattern?

As a person that’s been writing strategy and designing for just short of a half century, I get around. See things. I see into things as a designer and a professional; and I see things as a journeyer, an explorer, a walker and wanderer. And as a man who wonders.

During my college years, I started into book design, as a contributor to my tuition and expenses—and yes, teaching calligraphy—back then the 70s, as in now—still teaching. Every week.

Neither was anything in the way of much pay,
but it was sustaining work, so I followed it.

During that time, I was [am] still interested in designing with the craftier maker-mode of handmade and custom-drawn fonts, book designs that used customized, tiny hand-drawn renderings. I designed customized fonts for clients, for stationeries, book plates, cover designs, menus, then signage, packaging and vehicular graphics. I got around—applying these theories.

I found some relationships, that relate as storytellings [and led] to other relationships. These held a fascination in fine printing, book design, customized design as well as limited edition publishing. That sequence was sparked in co-student [at The Evergreen State College] Jonathan Ott, which then led to Gordon Watson, Andrew Weil—and finally, Albert Hoffman and Richard Evans Schultes.

Who are these people, anyway?

They’re patterns in my experience as a designer: “what goes round, comes around”—for what we know is that the threading of one’s life experiences is but a sequence of portal-opening points—patterning in relationships and learnings emerge as points of light [or dark] discovering, that lead to other patterns and vistas of circumspection. Where you were:
you are.

You either see them, or you do not.

You either trace the patterning of the way, newly-found or rediscovered, or you ignore them and move along.

I watch for them—the open patterning and tracery of discovering. The watchful way of insight re-ignition.
It comes back to you.
Again. And again. 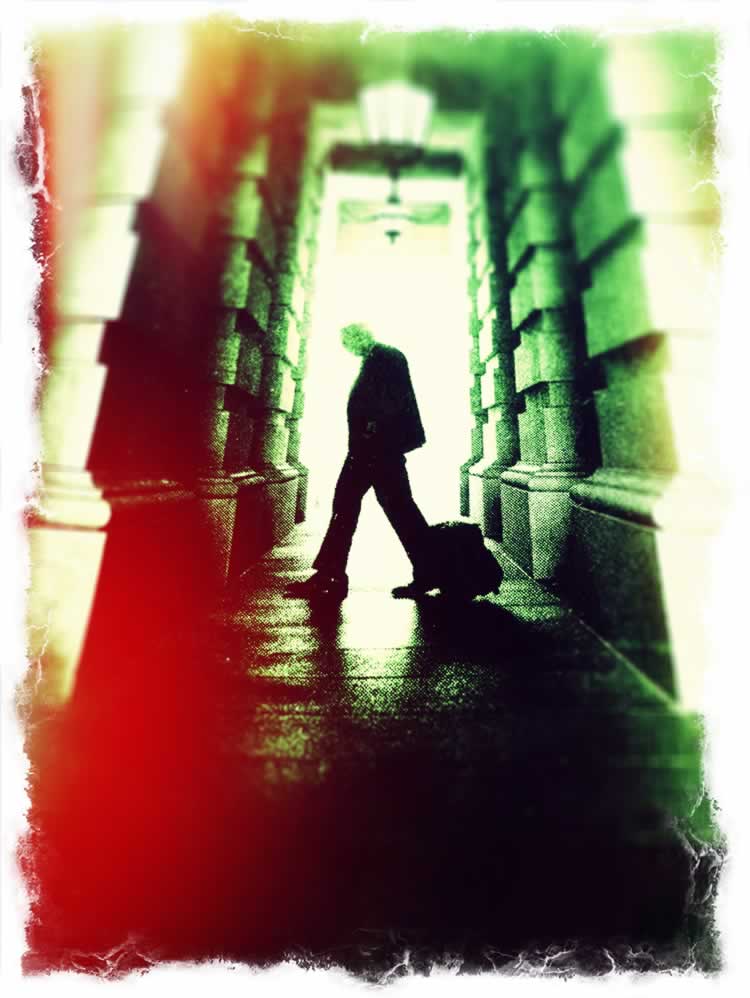 There are chances re-emerging.

Jonathan Ott. The link for Ott—ties first to stationeries and book design—I designed his books, did illustration and broadsides—and print collateral. Through that book-making collaboration we worked on building-out a series of conferences with Jeremy Bigwood, during college, on Entheogens “god-vision-producing substances,”
which are mostly psychoactive plants. 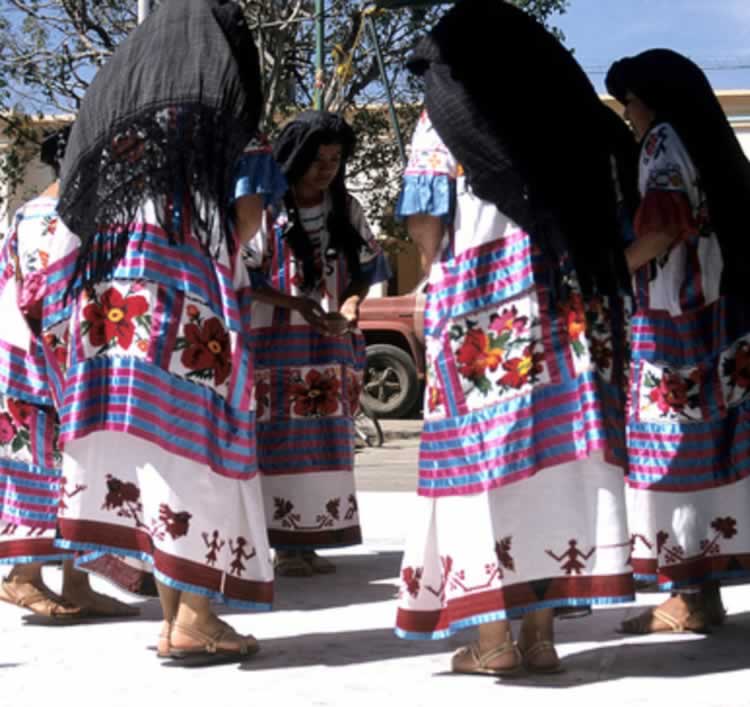 That long scrollery of poster bannering [below] you see in front is an on-the-spot signing rendering at the conference that I brush-rendered and co-authored with Ott and his colleagues.

We did that conference-building twice—
once in PortTownsend, WA. | Centrum;
the second time at San Francisco, CA. | the Japan Center—the 70s. 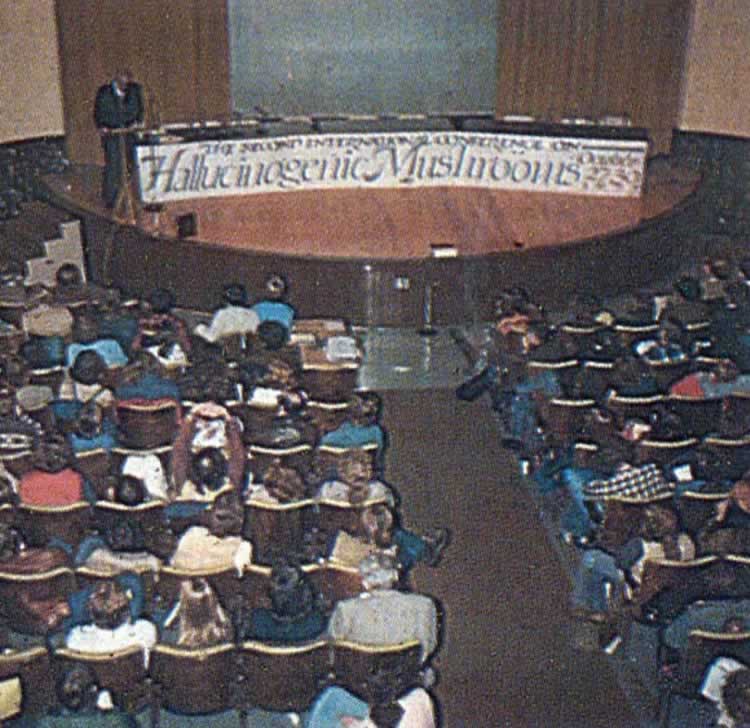 No idea where this image came from.

T H E P A T T E R N I N G S
There is a threading here that bridges my earlier years with later encounters and the meaning, twixt them. From college, ethnomycology, entheogens and book design, to Harvard and Richard Evans Schultes to to the present day—Wade Davis, whose link to me goes back to designing his movie brand, concocted by Wes Craven’s fervid reimagining. And the story about Wade, Zombie poisons and Voodoo?

What I’m fascinated by, in this reach-out to you, is the tapestry loom-woven of interconnectivity; the weft of one, becomes the warp of another and the tapestry emerges in still another dimension. The indices align and there are causal moments in time, where the momentum synchronizes.

For me, the link to that world, and the work of it, started in design. Books, bookmarks and bookplate design. And then conference design. These participants, the speakers that we invited and who came to the events were global celebrities of natural healing, plant psychos actives, mushroom cultural effects [classically and otherwise.]

Albert Hoffmann? The discoverer of LSD.
Met him: he spoke at our events. 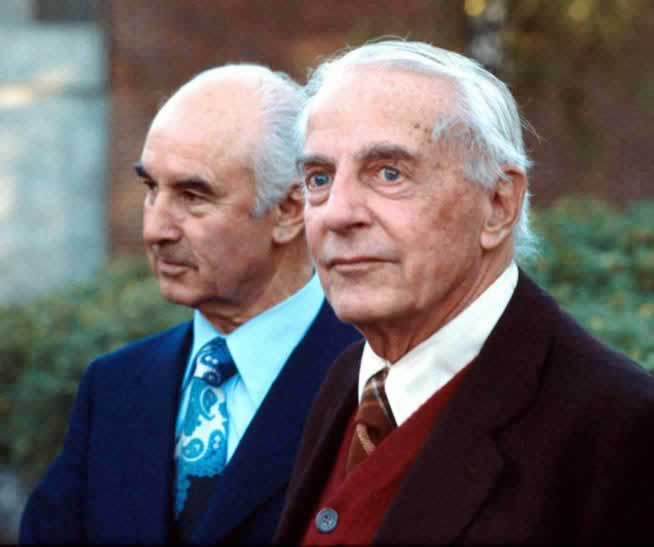 And R.Gordon Wasson, [on the right, above] banker and financier as well as author of the massively researched and luxuriously produced books on mushrooms as gateways to otherworldly visioning and healing powers. Met him: designed for him, crafted books and art for his libraries.

And the tracery of pattern continues: his colleague in investigating the other realms of psychoactive substances,
Harvard ethnobotanist:
Richard Evans Schultes, a real-time Indiana Jones who’d been exploring remote jungles and civilizations in pursuit of new potentials in healing compounds. 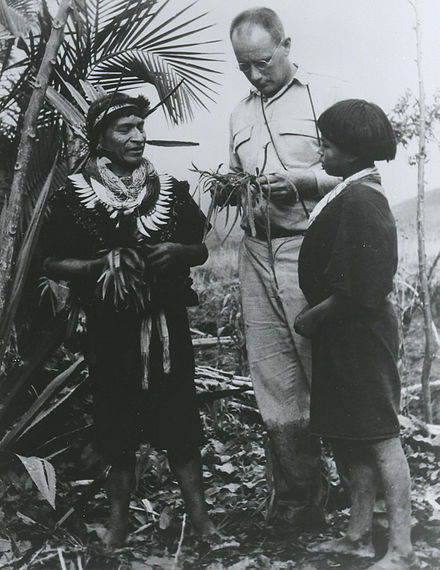 He discovered other traits in unknown plants as well.
The NYTimes writes at his death
:
Richard Evans Schultes, a swashbuckling scientist and influential Harvard University educator who was widely considered the preeminent authority on hallucinogenic and medicinal plants, died on Tuesday in Boston. He was 86 and lived in Waltham, a Boston suburb.

Dr. Schultes (pronounced SHULL-tees) was often called the father of ethnobotany, the field that studies the relationship between native cultures and their use of plants. Over decades of research, mainly in Colombia’s Amazon region, he documented the use of more than 2,000 medicinal plants among Indians of a dozen tribes, many of whom had never seen a white man before.

”I do not believe in hostile Indians,” Dr. Schultes was quoted as saying in a 1992 article about him in The New Yorker by E. J. Kahn Jr. ”All that is required to bring out their gentlemanliness is reciprocal gentlemanliness.”

Tall, muscular, wearing a pith helmet, he hiked and paddled through Amazonia for months at a time. He collected more than 24,000 plant specimens. More than 120 species bear his name, as does a 2.2 million-acre tract of protected rain forest in Colombia, Sector Schultes, which the government there set aside in 1986.

”The last of the great plant explorers in the Victorian tradition,” was the way one of his former students, Wade Davis, described him in his 1985 best-selling book, ”The Serpent and the Rainbow” (Simon & Schuster).

Met him. He spoke at our events.

Also: Paul Stamets, of course, is one part of the pattern. Then, a college student like me, now a globally recognized mycologist and CEO of FungiPerfecti, as well as a GIRVIN client.

There was, too—other elements to the patterning: a friend and co-mystical explorer: Rick Doblin. Even earlier, a college buddy “rebuilding his mind with LSD-25,” as he put it then, went on to form MAPS. After some decades, we reconnected in 2017.

But the patterning comes back in a manner that realigns earlier times with the present moment. That would be Wade Davis—and his earlier study thesis with the Indiana Jones of Harvard.

I worked on the branding of that film, to this year, 30 years ago—a roughened semi-classical font, staggered and bounced-lilting, one that you might find on some distressed and faded label,
hundreds of years old. 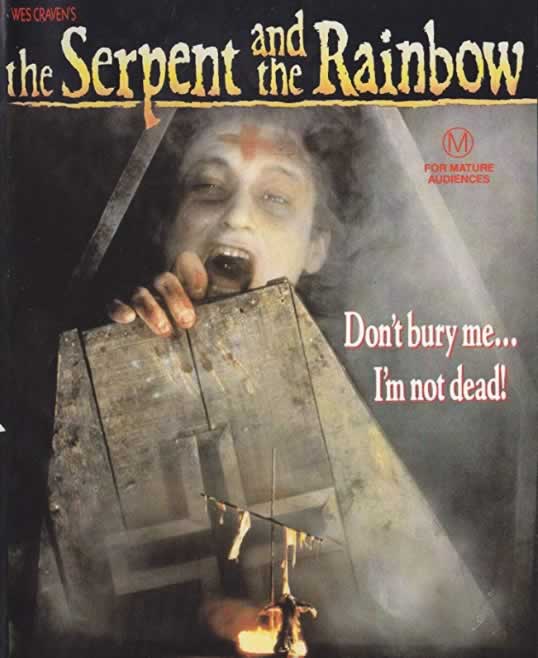 Thematically, that was tied, by design, to the context of the more ancient legacy, the admixture of a natural death-implying toxin, zombies and Haitian culture.

I used that as my calling card in re-introducing myself to Wade Davis at his talk in NYC on his recent masterwork.
I also met his wife Gail Percy.
That stretched out—
far back—the past, far forward—
the present of this moment,
far-flung: the future.

Therein, and there in, lies the patterning, what was done, what is learned, how those expressions of patterning return and reignite and you keep on. Keep on.

TIM
–––––
MADE BY PEOPLE FOR PEOPLE
HUMAN BRAND DEVELOPMENT | The strategies of rippling genius
https://www.girvin.com/subsites/humanbrands/

THE WORD, THE MARK, THE QUEST FOR MEANING IN BEING

THERE IS A WORD AND A STRING OF LETTERFORMS; AND IN THE CONSTRUCT OF THE TWO, THERE IS MEANING IN THEIR BEING. CONTEXT AND WHAT THAT MEANS FOR A DESIGNER, A BRAND AND AN EXPERIENCER. [Above] Tim Girvin shooting words, textures, materials | photo Dawn A. Clark IN THE QUEST[IONING] OF THE CRAFT, your journey,…

SYNAESTHETIC EXPERIENTIALITY AND DESIGN LEADERSHIP As a journeyer of decades of design, all over the world, and in partnering with many adepts in that journey, it’s interesting to study different models of design leadership. There are collaborators and team-builders, there are legions of implementors and executioners and there are the leaders and visionaries that drive…
We use cookies on our website to give you the best experience on our website. By clicking “Accept”, you consent to the use of ALL the cookies.
Do not sell my personal information.
Cookie SettingsAccept
Manage consent