THE GEOMETRY OF SPIRITUALITY–SACRAL ALIGNMENTS 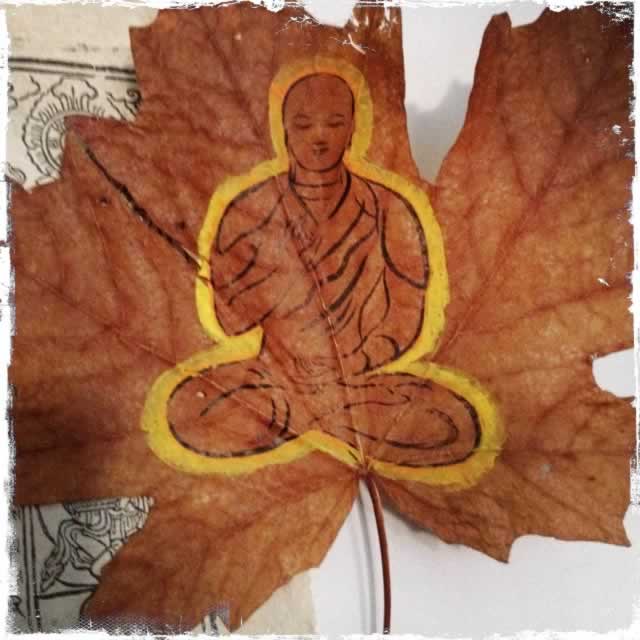 EVERYONE HAS A CHALLENGING TIME.
“WHAT DO YOU DO WITH THAT TIME?”
How do you get through that?

There are a couple of pathways for me.

Reading is one—
reading, a lot.

Another is drawing—in two pathways of work; one: more as in a non-thinking fluency-based form of drawing, circling and flowing—drawing in energy. 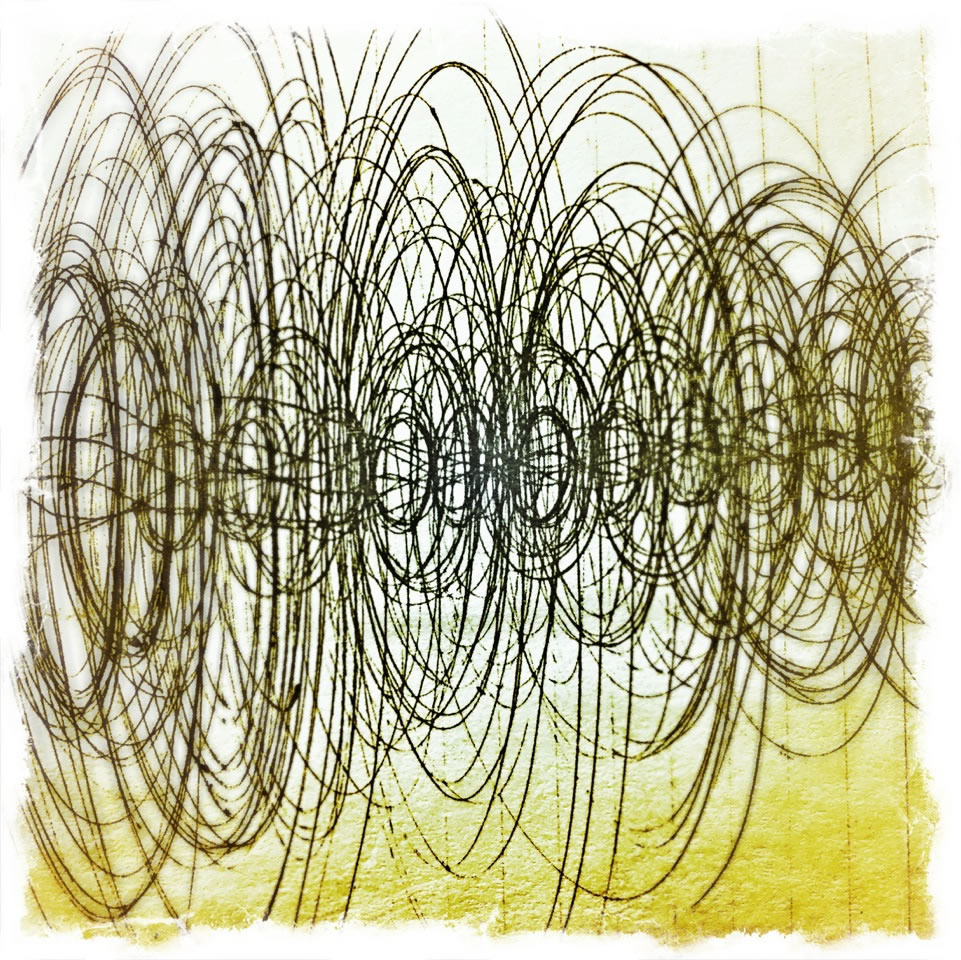 Some might think of it as calligraphy, or a wrist-warm-up as in the old days of Spencerian and Palmerian handwriting muscle and memory warming.
You might call it doodling.

A note from a friend reminded me of this grouping of studies below—coming through, post pandémos, which inherently relate to design—as in the sign of a making, a translation of content to a new interpretation and gesturing forward—another portal, a new way of sensing, seeing, touching and hearing. 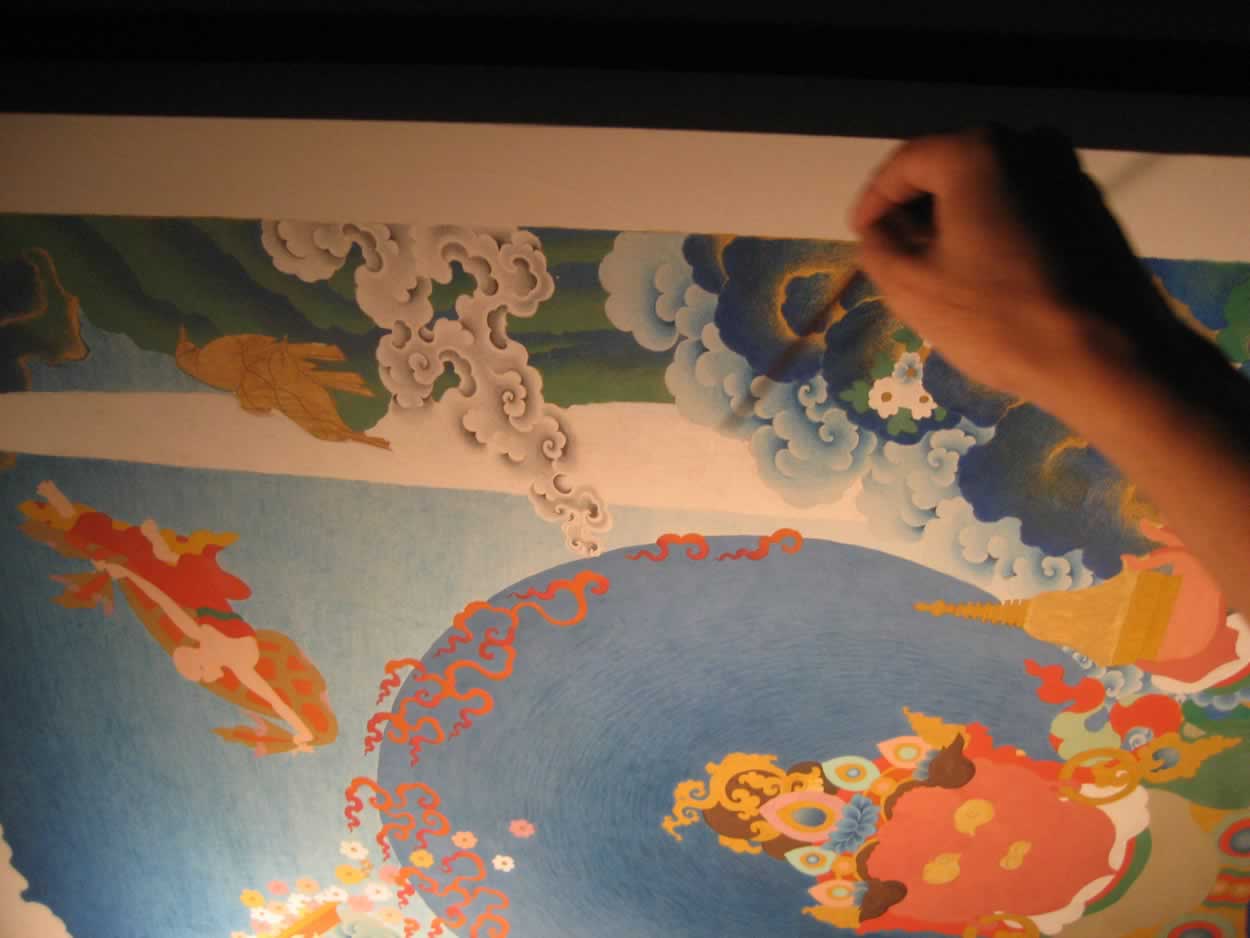 On another geographic front, to this rendering of re-covering, moving forward, I recall the fascination of meaning the work of embracing change, transitioning and making good—to the bettering of the future. In my travels to the Himalaya, I spent some time in the monasteries of Tibet, north to Mongolia, west to Bhutan, watching the painters.

And I noted a underlayment of geometry in these paintings—it was if there was a kind of geometric hierarchy as to how these figures should be rendered, a structural discipline—the face and embodiment of the gesture of these renderings. I studied them, particularly in this gloom time, as a way of making my way—literally—passing along to another tier; here hoping for optimism and uplift. I still practice this personal, maker-based transitioning, using other tools, stories and media. But uplift happened then, and happens again now.

You can see that geometric substrate as a way forward to the articulation of these paintings, massively large, wall-sized, or smaller and more delicate constructions.
The idea of a hidden geometry is something that is a kind of repeating patterning, unto itself in our work—for example, the proportional strategy for book design—as in our work for Scott Oki, all predicated on a theory of deep geometry. 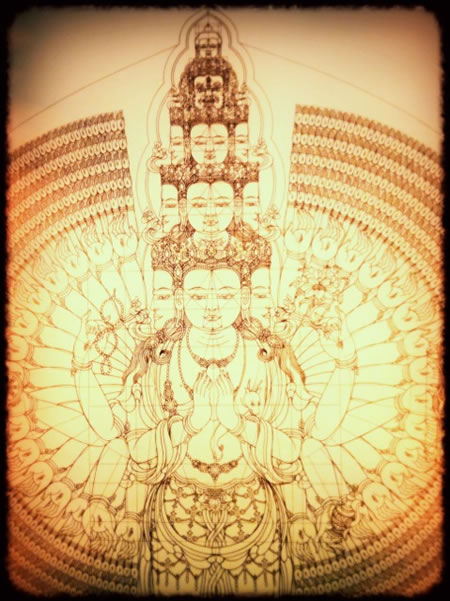 The Rubin Museum | NYC | Geometric patterning of a Bodhisattva print
108 paintings of divinity—
the mala, the spiritual thread
of prayer.

Below is a photograph of the 16×20″ poster of nearly all the paintings of the digital gathering of the Girvin Bodhisattva mala.

Visit us on Etsy if you’re interested in a custom-printed and signed edition on torn-edged laid stock of the complete poster impression. 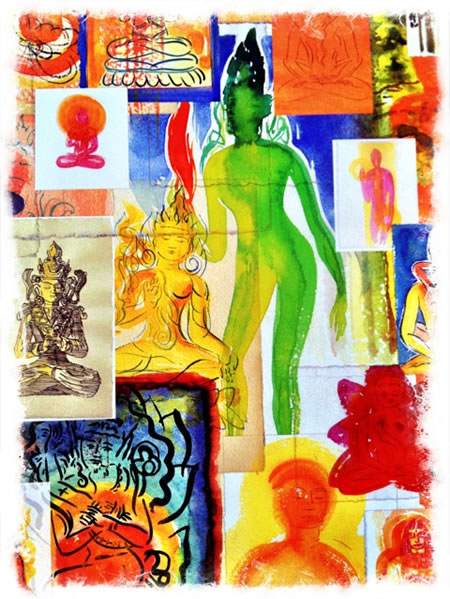 NOTES ON THE TRADITION | Numbers and spirituality

In many classical drawing and iconographical traditions, there is a mapping, a geometrical cartography, that is used to define the rightful positioning and proportion of the rendering of spiritual forms and their drawings—on earth. In this manner, copies of the correct rendering of the spirit forms, can be repeated, by the observant.
A rosary, mala, Sanskrit: माला—the painted string of 108 drawings, in watercolour, on varying stocks of old handmade paper—
the collected journey, a meditative path, of Bodhisattva.

I based all of them on the construct of the geometry—as well as the symbolic unfolding of the numbers—which, as client Sarah de Joybert notes is a string of repetitive mysticism that finds its way in many places of representation.

Sarah is the foundress of Hum.life, a Yoga and Meditation brand that we helped her bring to live as Hum. It is layered with a brand patterning of deeply symbolic and spiritual lines of mystical, cosmical cartography.

As she notes in her observations.

And her commentary on numbers—the value of 108. As a question asked of a yogini:
What do the heart chakra, baseball and Buddhist temples all have in common?
and the answer forward—
“They all have a sacred and significant number in common: 108…a number that has been revered since ancient times. There are many diverse scientific instances, philosophical and spiritual beliefs around the number 108. And it’s also sacred and meaningful in yogic philosophy and practice. Consider these:

To that, this healing mala for me is 108 paintings of which I retain all the originals, and offer others as prints to clients, customers and friends—to help them in their times of needfulness.They define that geometry in a more open interpretation—the deeper math hidden beneath, inside the paintings. 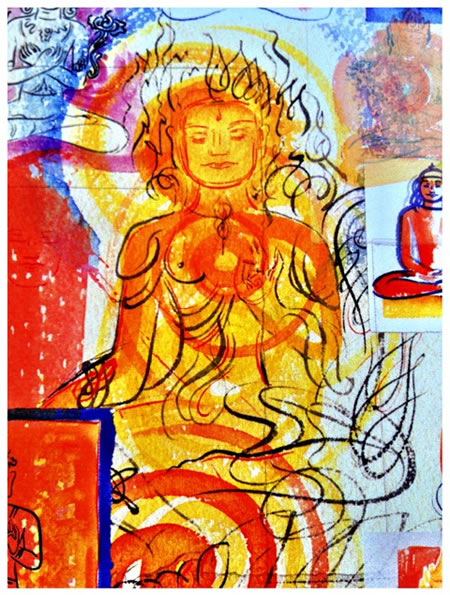 I studied them and drew them—past, passing that gloom time [2000-2002] for me.
Passed, a dark time—in doing these drawings. Still, to this date, drawing is—as the word implies—a drawn solution to pass what’s past, never stare back—and move forward. 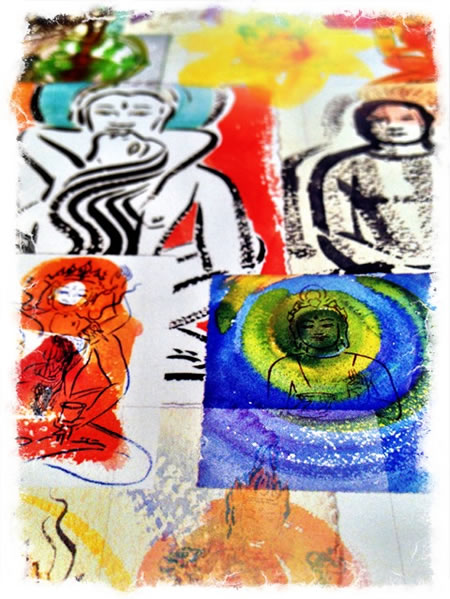 I used hand-ground and mixed pigments on
a palette of glass that I have to this day. 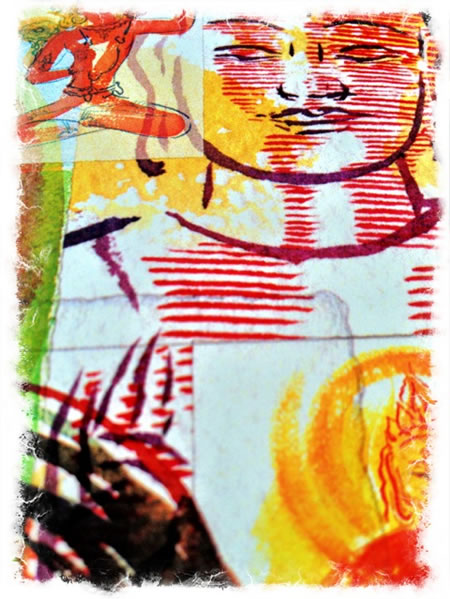 Some are simple brush drawings — as in this one rendering, simplified: 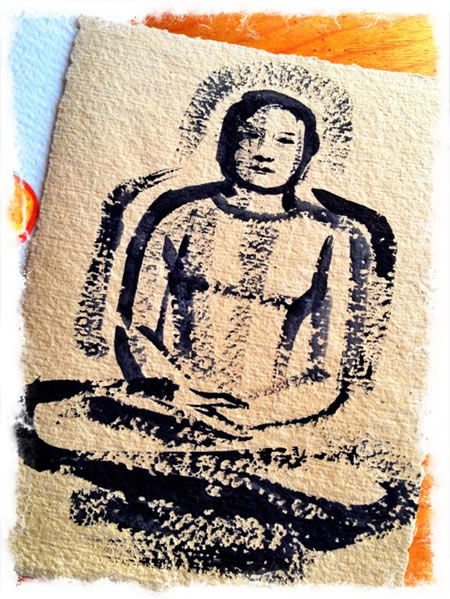 Others are more complex, layered with intense coloration. 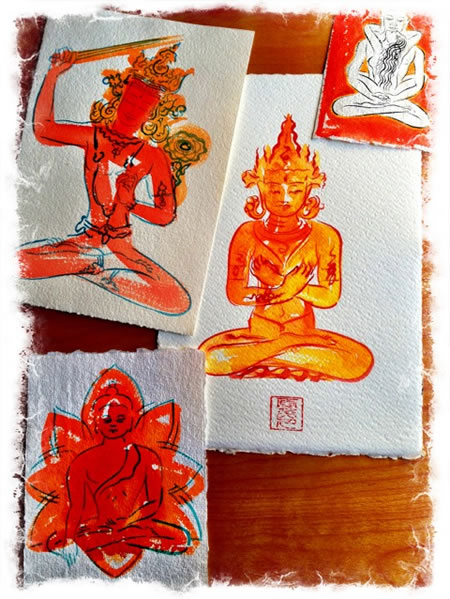 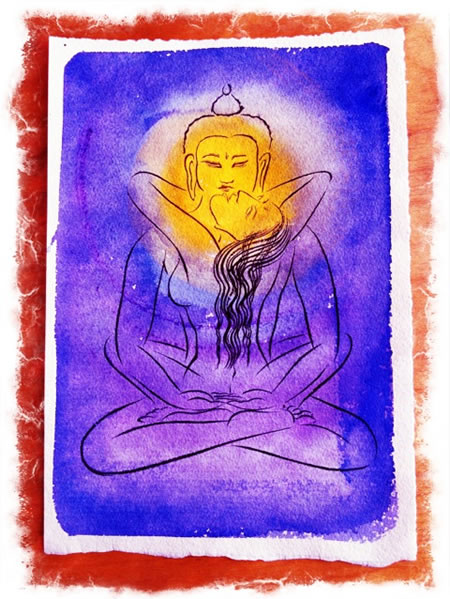 Some are complex—others, a massing of strokes
in carbon black to form the idea and the gesture. 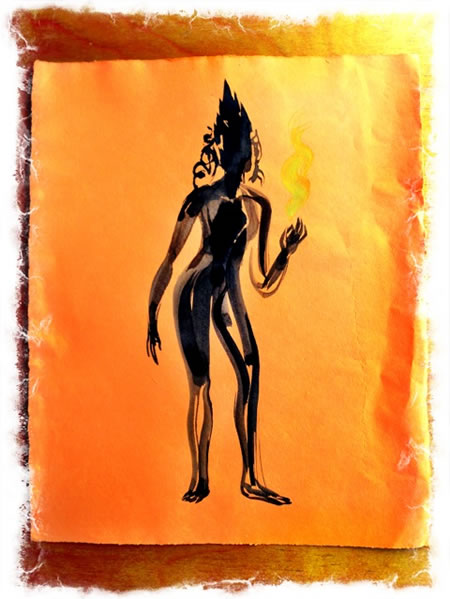 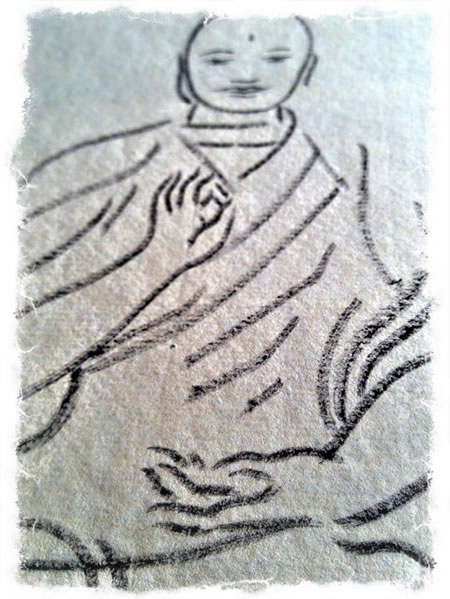 Others are washes of color in color, which could be the green of the earth, the blue of the sea, the striking power of the sun’s colors—brilliant as blood. 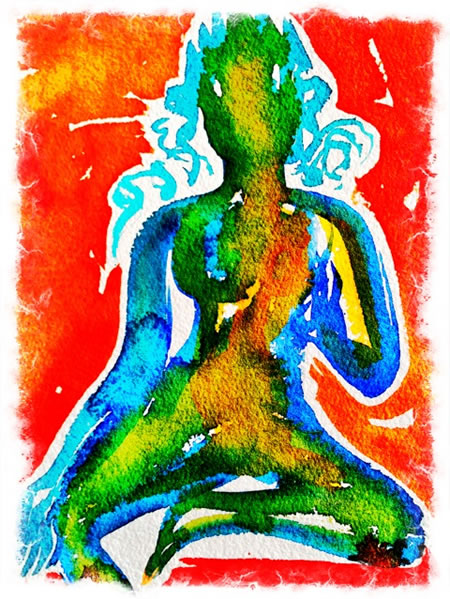 Point is, the meditation of drawing and painting, to a regimen of relatively precise geometric expectation, is a good study in the temperament of contemplation. From the passage of the 90s to the 2000s was a time of darker sequencing and self-perpetuating collapse.

I sought answers to my youngest brother’s death, 9/11, economic collapses and the ripple-out of challenges that emerged.

P A N D É M O S
Another time for moving forward, getting out of the rut of one, for the smoother road of another uplift, forward. I keep drawing.

These, in that selfsame sense of the aloft, for my best friend—
a 20’ accordion folding book, an ori-hon-style [more than 20’ long and 16” high,] and her movement forward—
uplifted—another journey around the Sun. 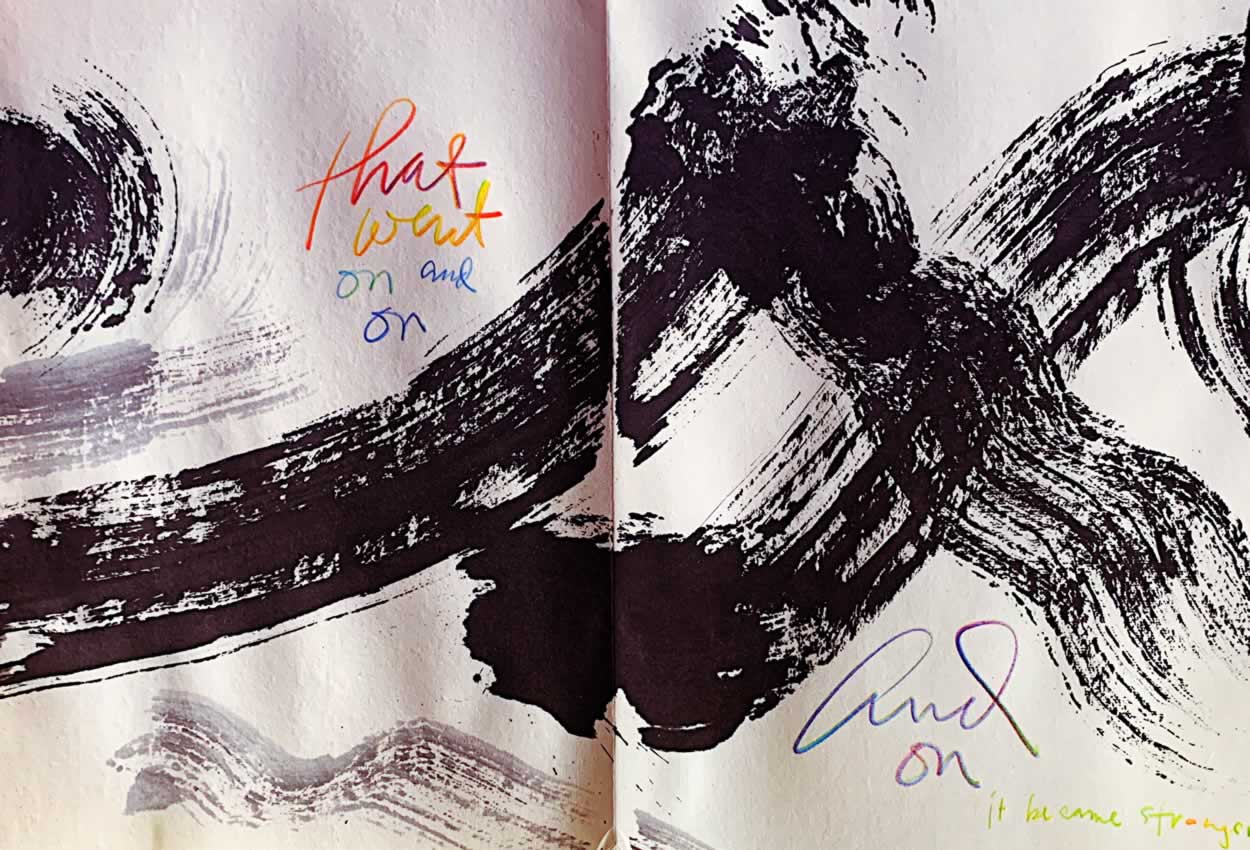 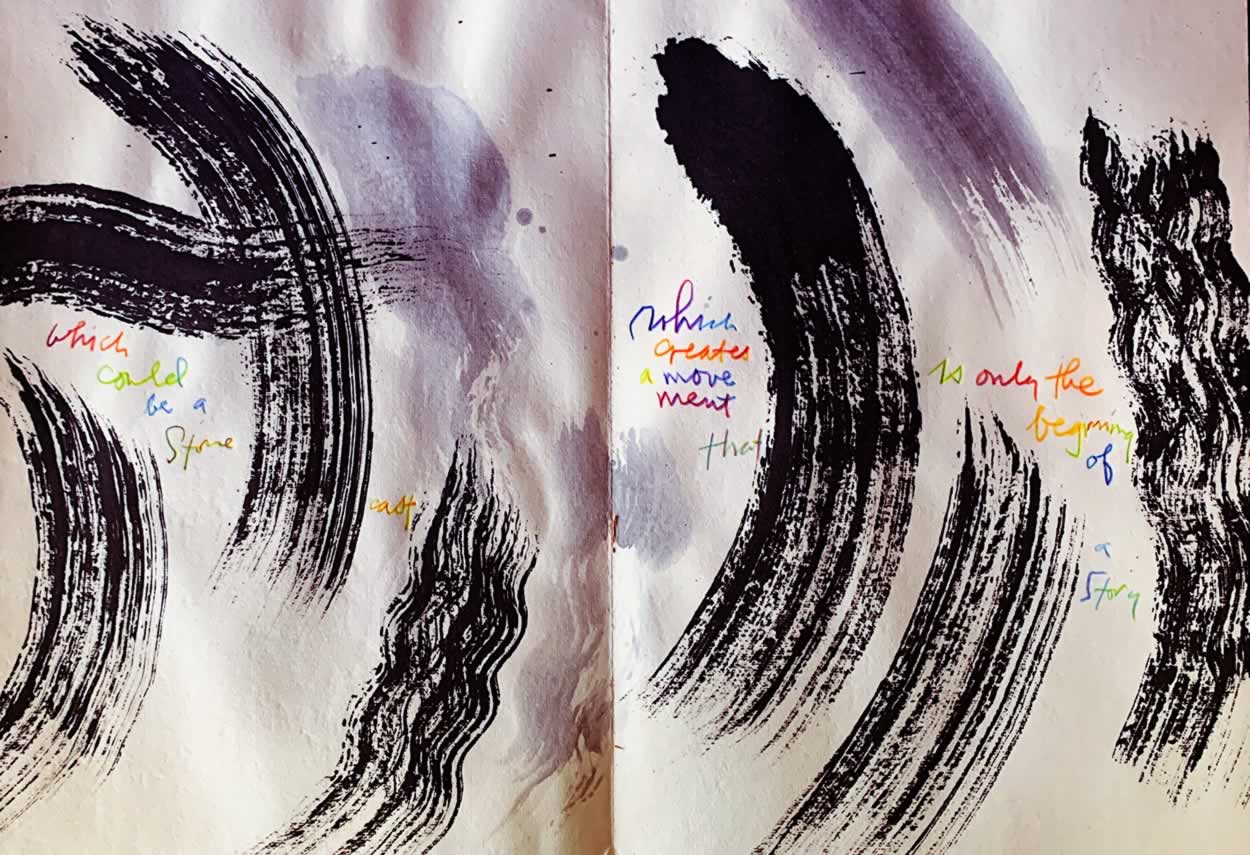 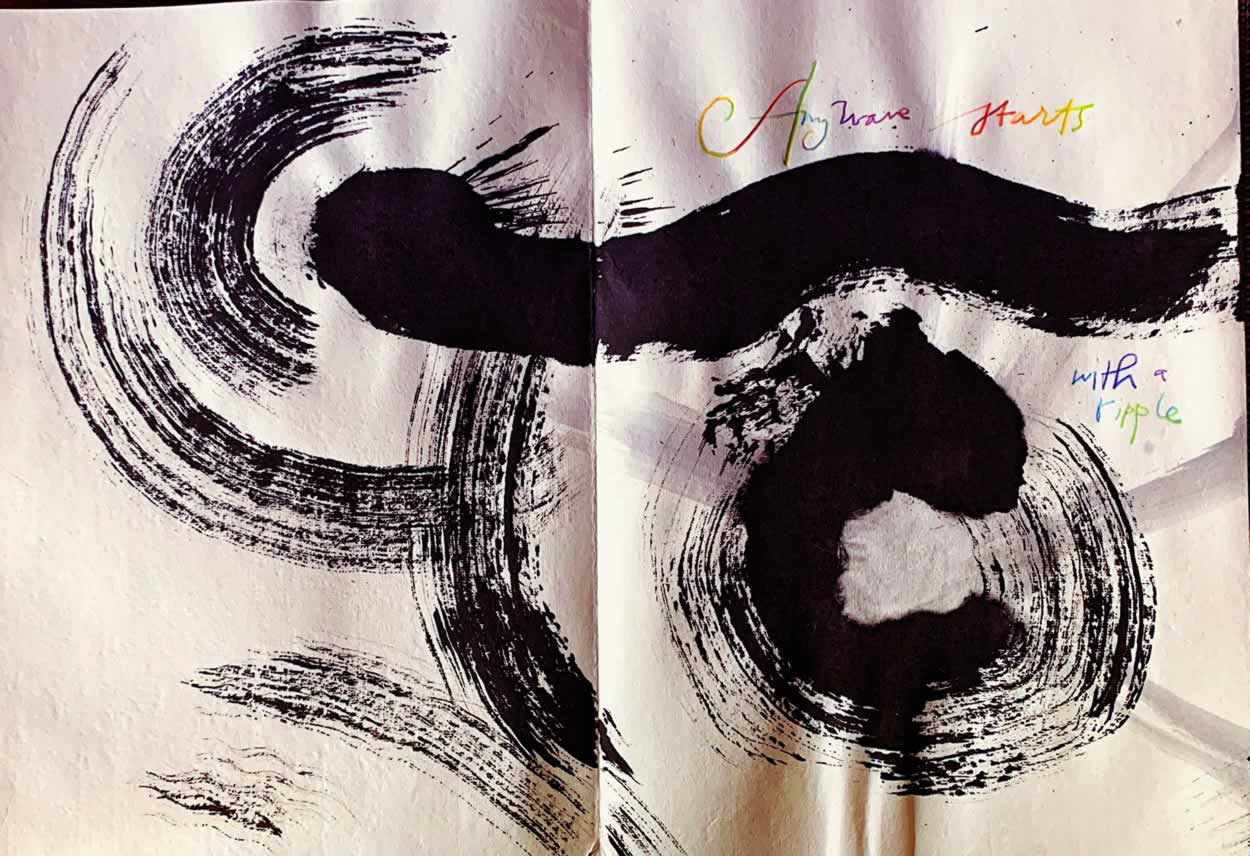 Change happens.
And you talk,
write, or paint
through
it.

And you get somewhere.

IS IT THAT THE GREAT IDEA IS A LIGHTNING STRIKE? OR IS IT A BURGEONING STORM? THE BRILLIANT, SCINTILLANT IDEA EMERGES AS A BREEZE—A SOFT TELLING, THEN THAT SHALL BECOME A WIND-RIVEN ROAR. There’s a question—the how of inspired idea[l]s—which could come as a lightning strike—or, as a progressive gathering of insights that culminates as…

IN THE VISIONING OF DREAMS—AND WHAT NARRATIVE CAN BE BUILT AROUND THEM—CALLING AS A COMPASS POINTING TO TRUE NORTH: THIS IS THE FUTURE, AND LEADERS COME FORWARD. Everyone knows this about leading, it’s pretty simple: “if you’re the leader, you’re the one in front, you’re taking the risk, you’re the one that is the first…
We use cookies on our website to give you the best experience on our website. By clicking “Accept”, you consent to the use of ALL the cookies.
Do not sell my personal information.
Cookie SettingsAccept
Manage consent